Today I was going to see  - Real Madrid!
No - Not the Football team.
This solved a long standing question in my mind - why was  a football team was called ‘Real Madrid’?
Was there a ‘Fake Madrid’?
Why this insistence on the veracity of Madrid?
Only now I realised that, in Spanish, ‘Real’ means ‘Royal’-  and thus the name  ‘Real Madrid’ meant the ‘Royal Madrid’ Football team!
​The Palacio Real de Madrid was The Royal Palace of Madrid! The largest palace in Europe! Spread over one and half million square feet, and with more than 3400 rooms! Whoa! 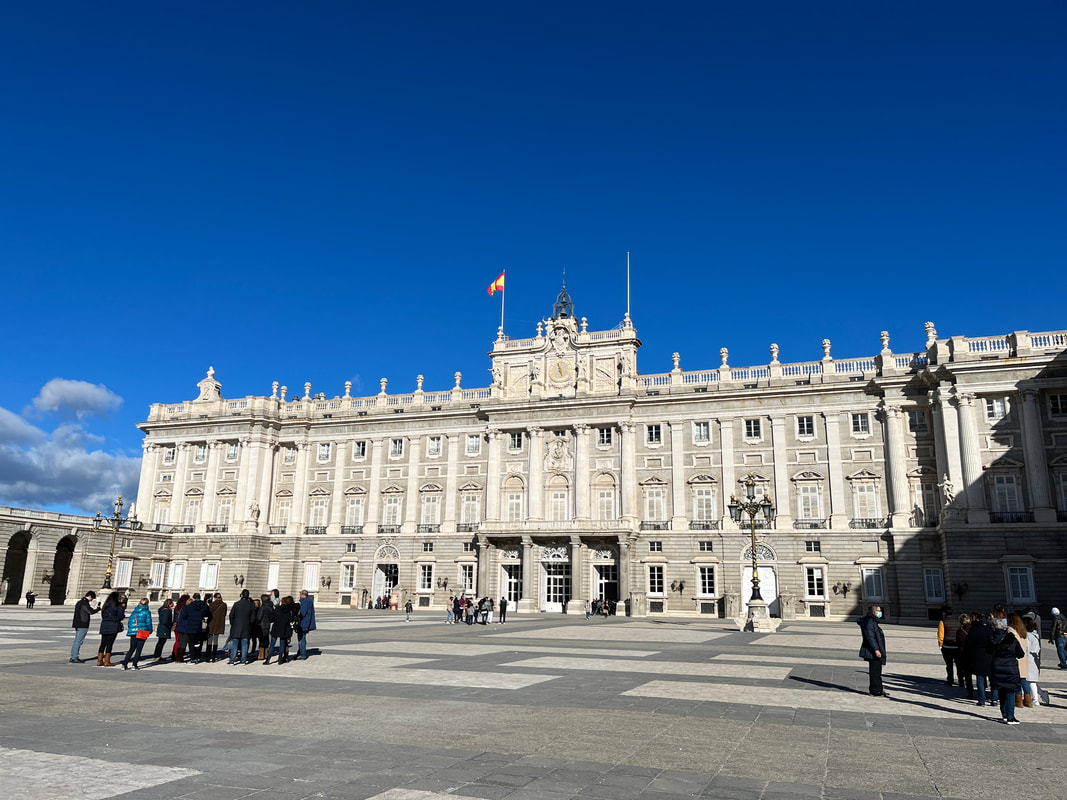 The site of the Royal Palace  in Madrid was originally a Moorish ‘alcazar’, or castle.
Why a ‘Moorish’ castle in Madrid? ‘Moorish’ means belonging to the ‘Moors’ - African people from Morocco.
​That is because Spain used to be ruled by the Moors! The entire Iberian peninsula - what is now Spain, Portugal and part of France - was under Moorish rule for more than 500 years! 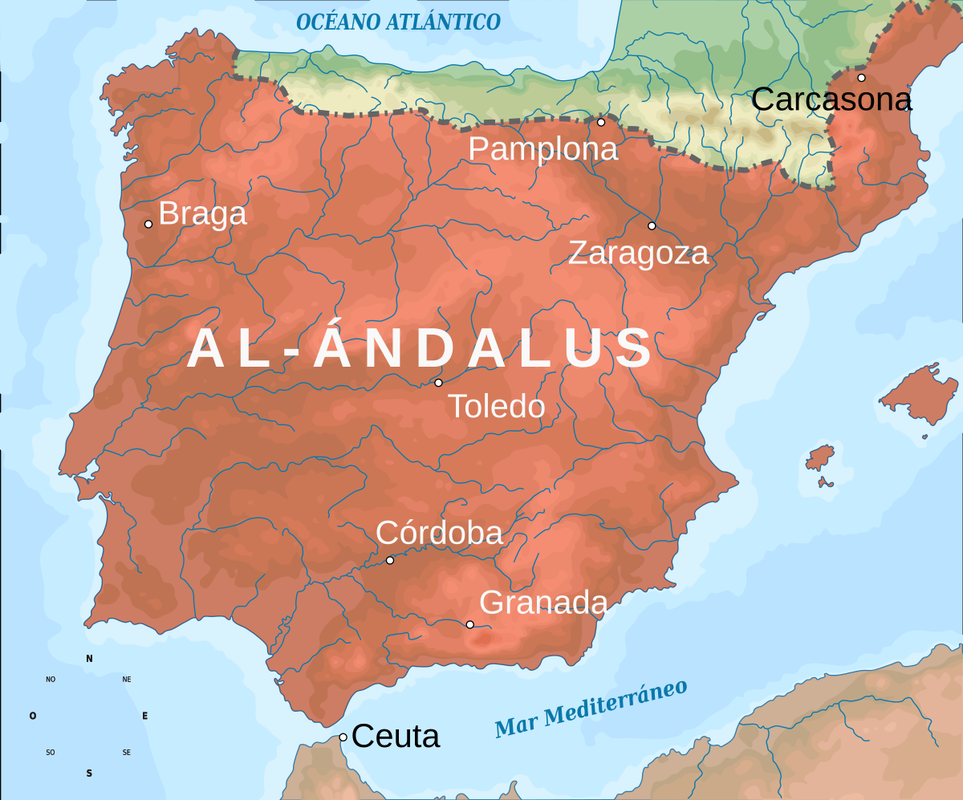 The King decided to settle down there in 1561 and make this ancient alcazar into his Royal palace. He had a lot of money due to the looting of the American colonies, and he had an existing castle- all he had to do was to move in and do up the place!(The castle was 800 years old! It must have taken quite some  expense and effort to do it up! )But unfortunately for him - On Christmas Eve 1734, the entire Royal Castle was destroyed by a terrible fire!  This fire lasted for four days and completely destroyed the old Alcázar -  and the king and his royal household barely had time to rush out of the place and save their royal behinds!
But King Felipe was determined to see the positive side! ‘This is a good opportunity to build an awesome new palace!’ King Felipe thought, as he stood outside in his nightgown, shivering in the Christmas cold. ‘Something to make the other European kings sit up and whistle in awe! WOOHOO!’ He had a lot of South American gold, and so money was no object!
​He ordered a new palace built on the same site - and it was such a big job that it took almost 20 years to build and another 10 years to furnish! Much like many Mumbaikars waiting for their homes to be redeveloped, Old Felipe died before he could move in - and his successor King Carlos III was the first occupant of the brand new Palacio Real in 1764 - and he extended and expanded it a good deal. 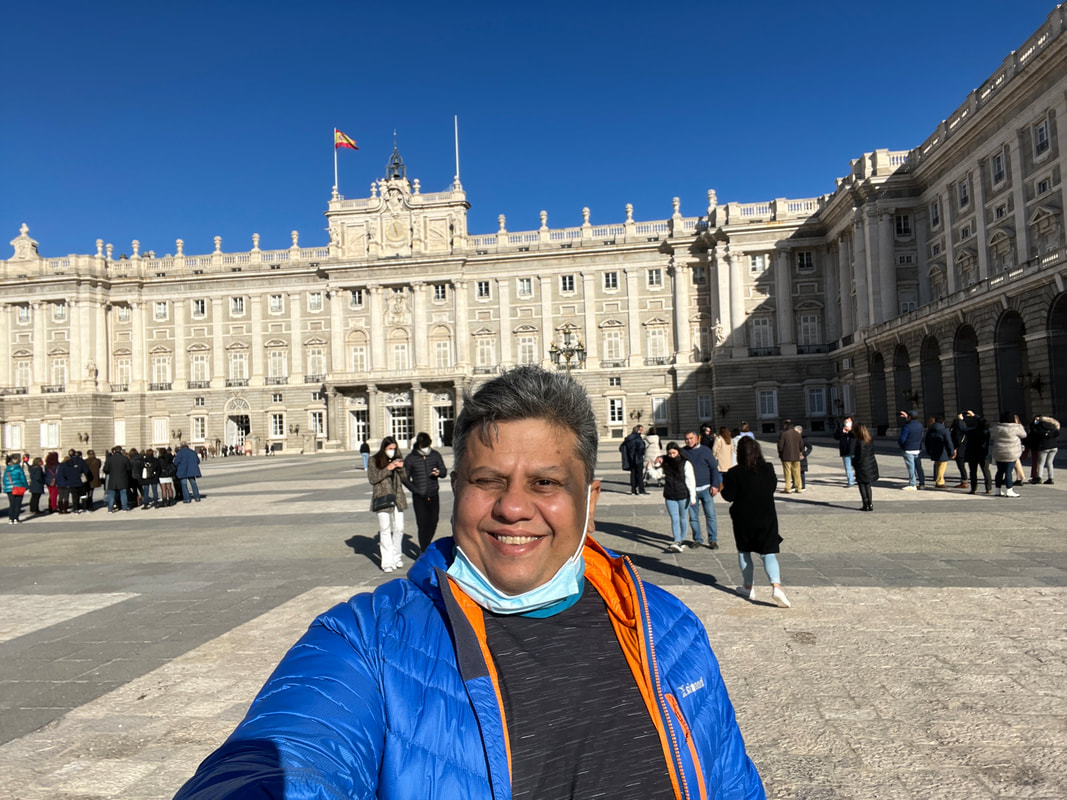 But a future occupant -King Ferdinand VII, didn’t like the decor - so decided to have another make-over, and turn it into a French-style palace. This was rather strange - because Ferdinand VII had just spent several years as a prisoner in a French palace!
He had been a prisoner of Napoleon Bonaparte. Bonaparte had first pretended to ally with Spain, but then he decided - No, I think I will take over the place instead! He took over Spain, clapped King Ferdinand VII into prison - and installed his brother (Napoleon’s brother, not Ferdinand’s) Joseph, as the new king of Spain.
Ferdinand’s fancy prison -  the Château de Valençay - must have been very nice indeed! He  was very impressed by the fancy French architecture and style. As soon as he got back on his throne after the fall of Napoleon, he decided to change his royal palace into the modern French-style - much like the Chateau he had been staying in, in France.
So… he was recreating his royal palace into a copy of his prison! How Stockholm-syndrome is that! 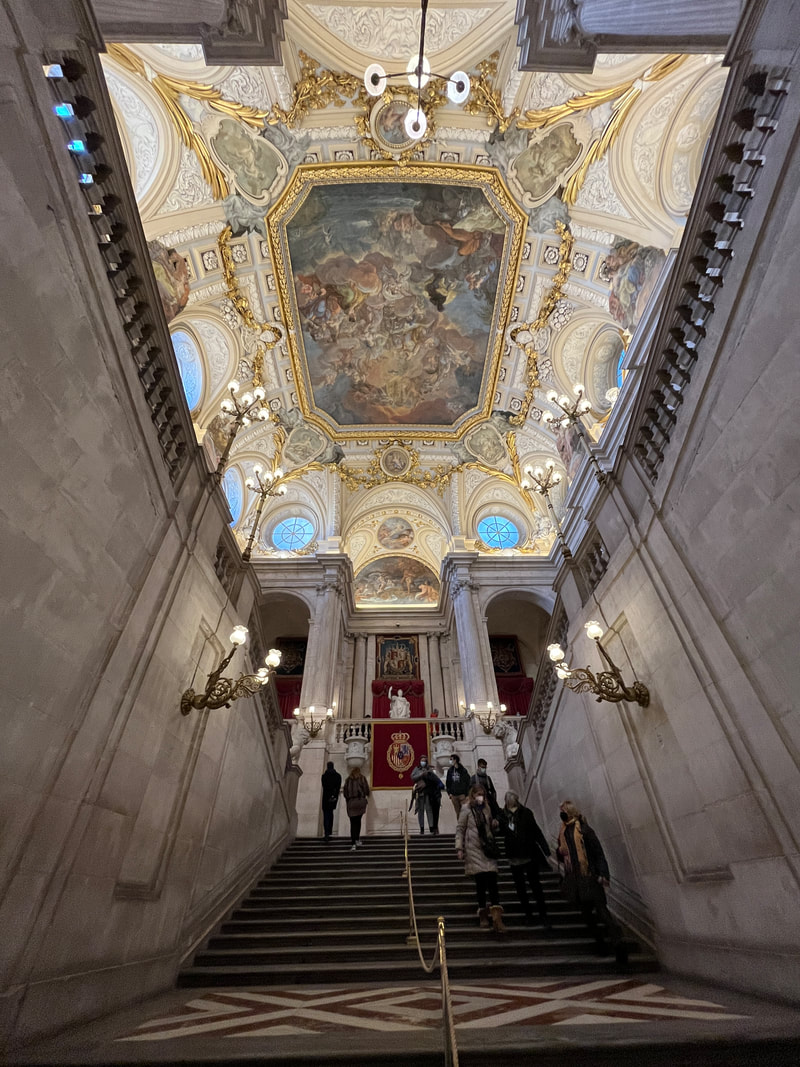 The place is so large, that only a small selection of the best rooms are open for visitors - and the route being changed every few months to provide variety.
It was simply magnificent!
What art! What scale! What taste! What riches!
​Your breath gets taken away as soon as you enter the building and see the ‘Grand staircase’ - which is a huge …er…staircase…made of a single piece of marble! There are sculptures and frescoes and murals and all kinds of stuff to take your breath away. 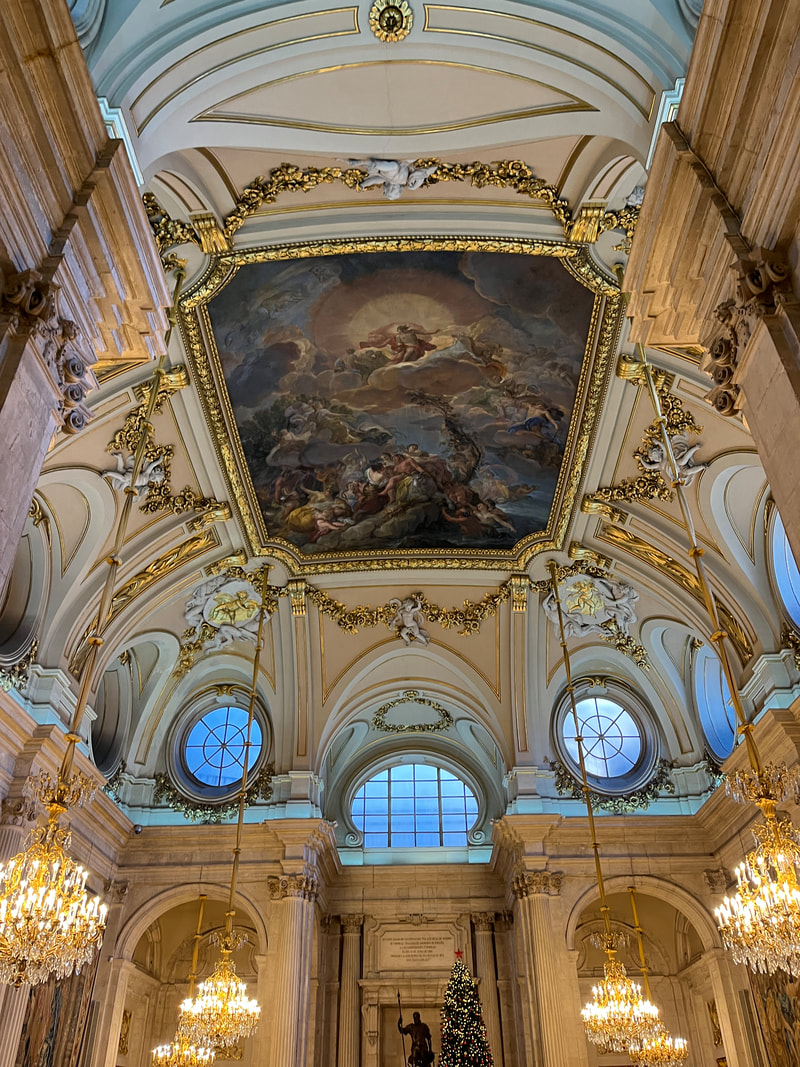 The interior is a wealth of art - the finest architecture, the most expensive materials, murals and friezes and statues and busts everywhere… It’s full of the fine paintings by eminent artists, artworks of all sort and collections of rare and expensive stuff.  I just loved the chapel with its incredible ceiling frescos, and the throne room with all its royal grandeur. 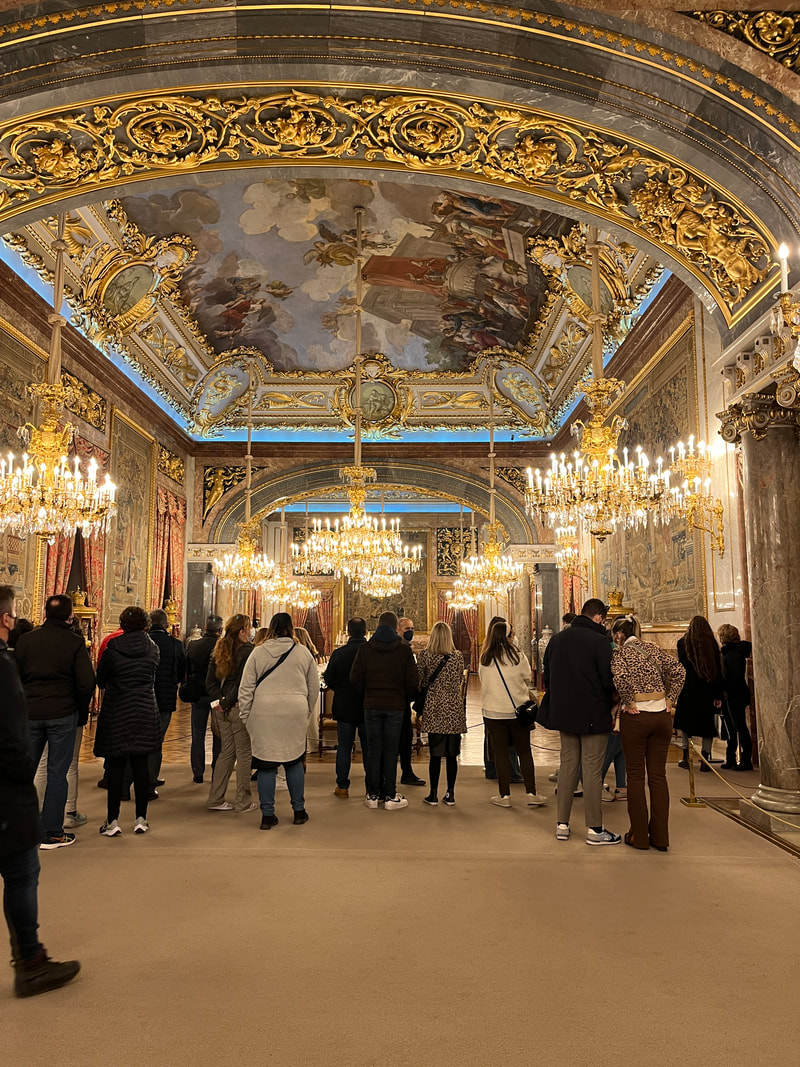 There were huge crowds and there were a lot of guided tours, but unfortunately were only in Spanish. I looked rather enviously at the groups - the guides looked passionate and well-spoken and watching their expressions and gestures was enjoyable even without knowing the language. And their script was good too - as you could tell from the interested expressions of the listeners and the guffaws they erupted into when the guide told a funny story. 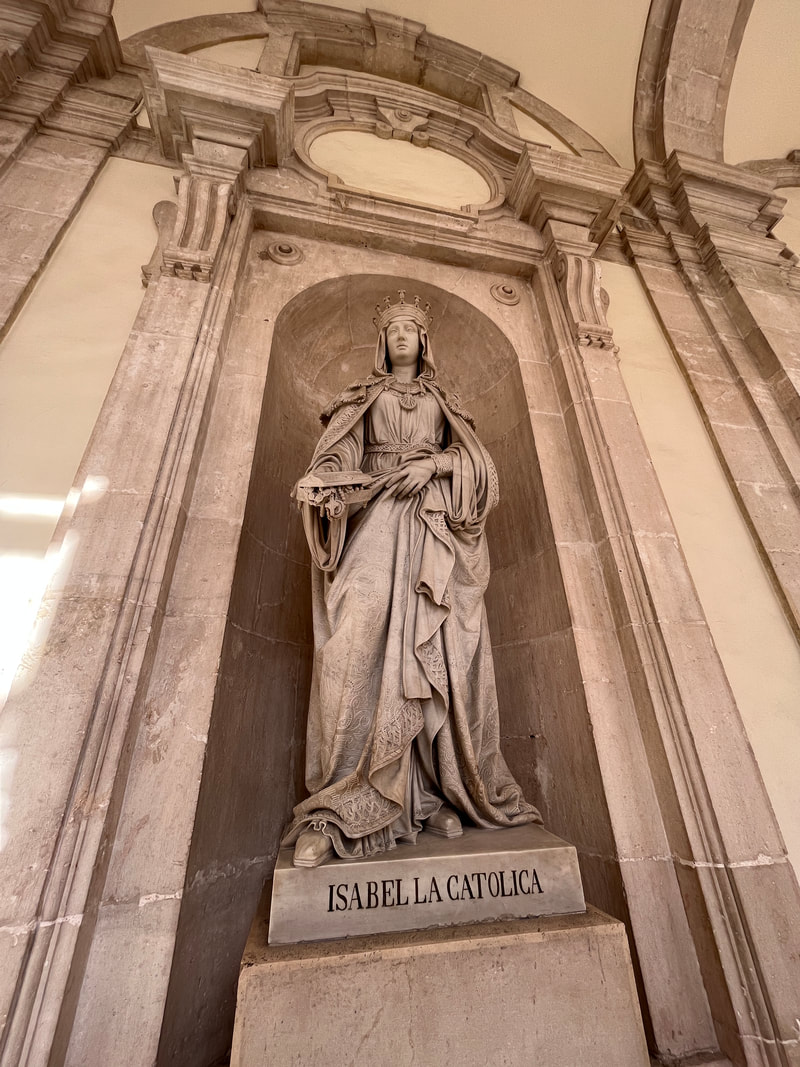 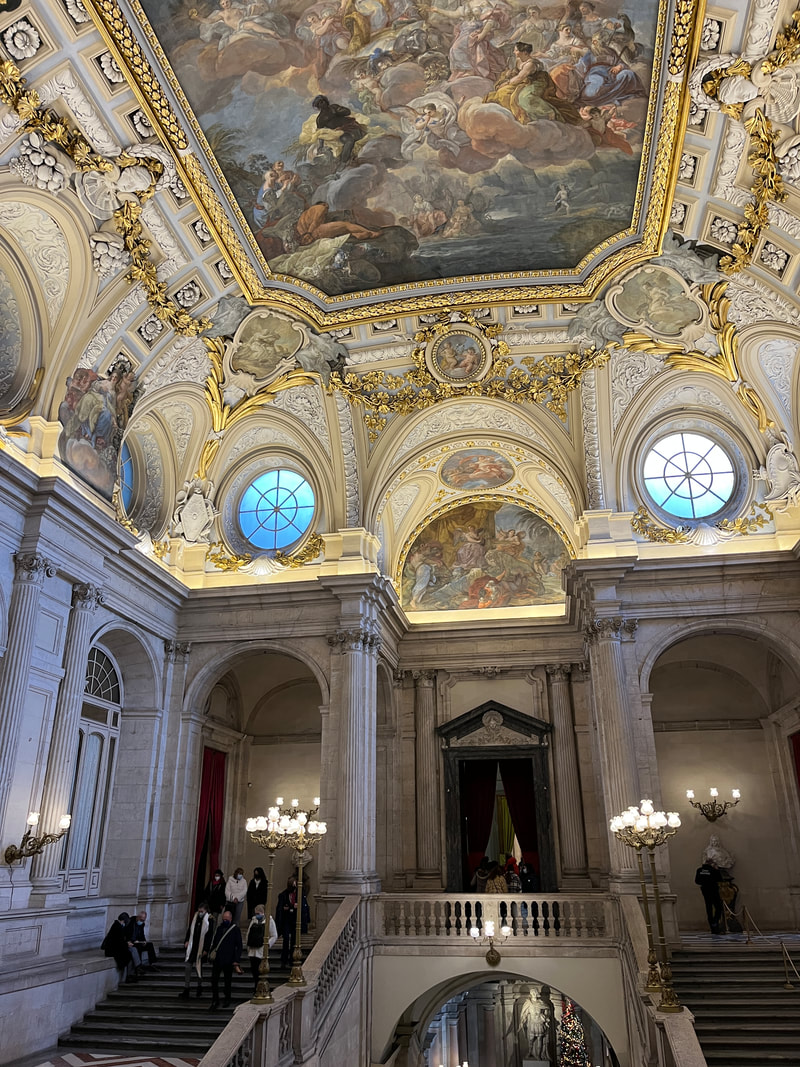 The place is so large, that only a small selection of the best rooms are open for visitors - and the route being changed every few months to provide variety. 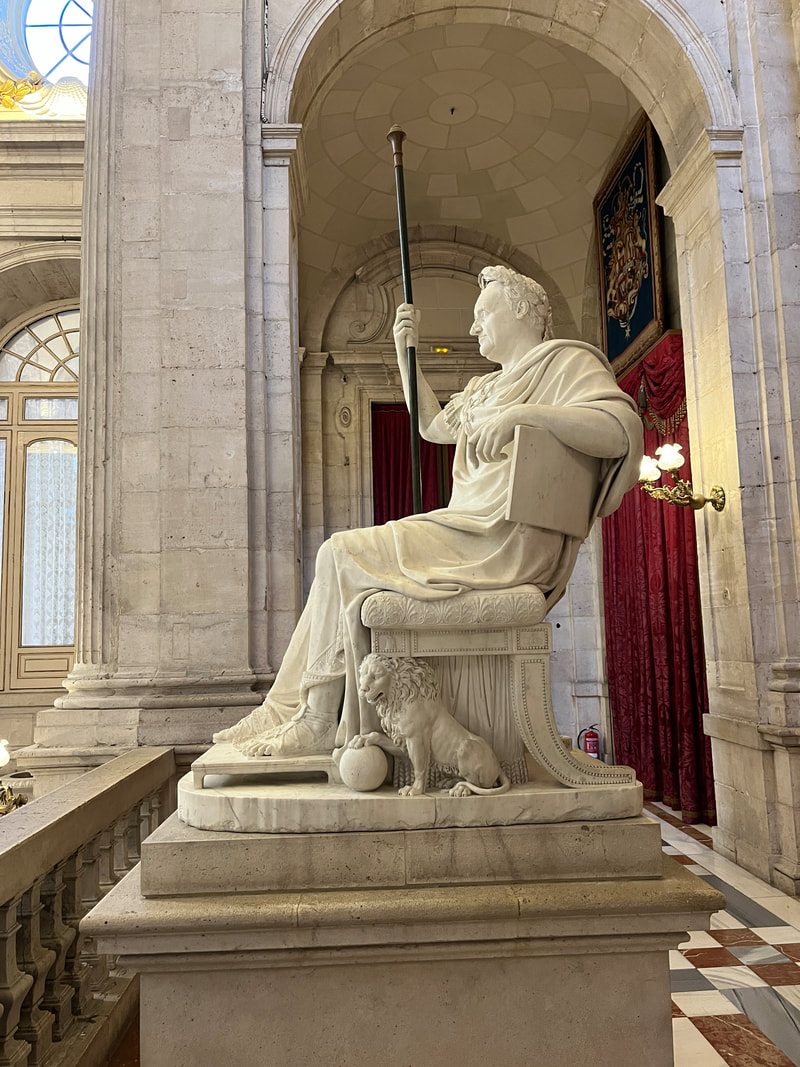 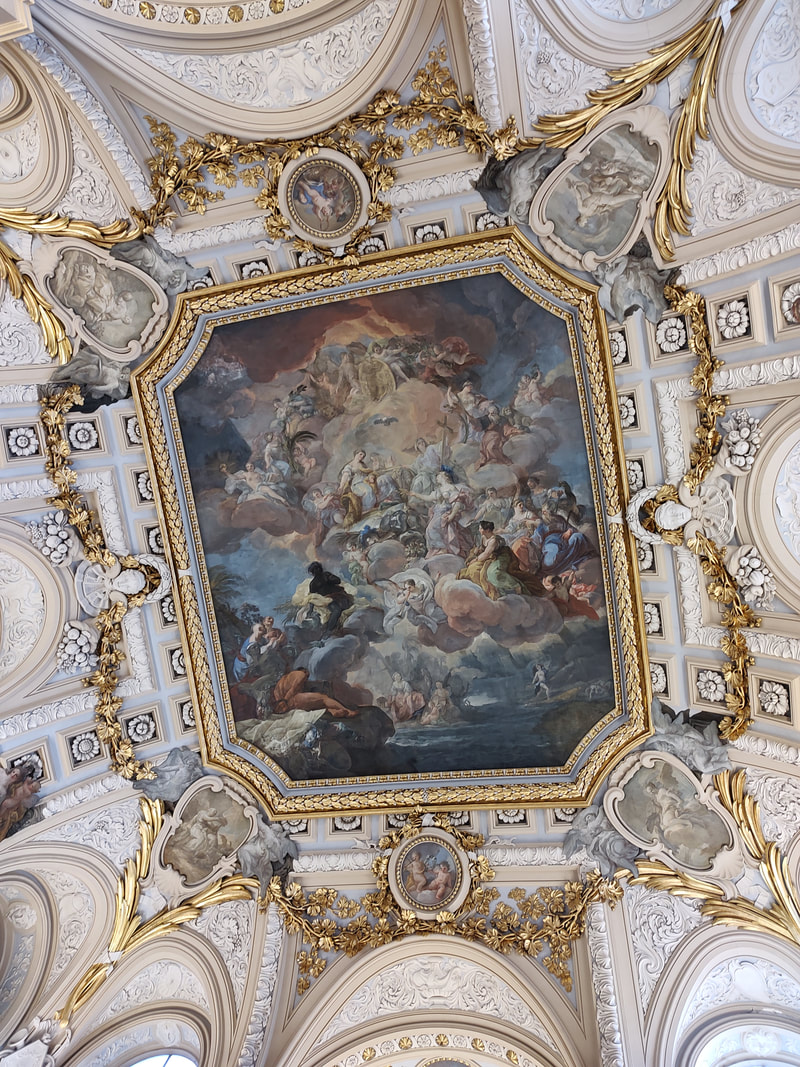 After the Palacio Real, the next thing to see was the famous Almudena cathedral - the seat of the  Roman Catholic Archdiocese of Madrid. And it was pretty easy to find too! Just turn around - and there it is! It is built in the same style as the Palace, so they look like a matched set.
But though they may look part of a set - they were built very far apart.
This  is a brand new cathedral -  not even 30 years old! It was consecrated by Pope John Paul II in 1993!
​I found this very interesting - why should a 500 hundred year old capital not have an ancient cathedral? So many other towns and cities in Spain had their own grand cathedrals - why wasn’t there one in the capital? 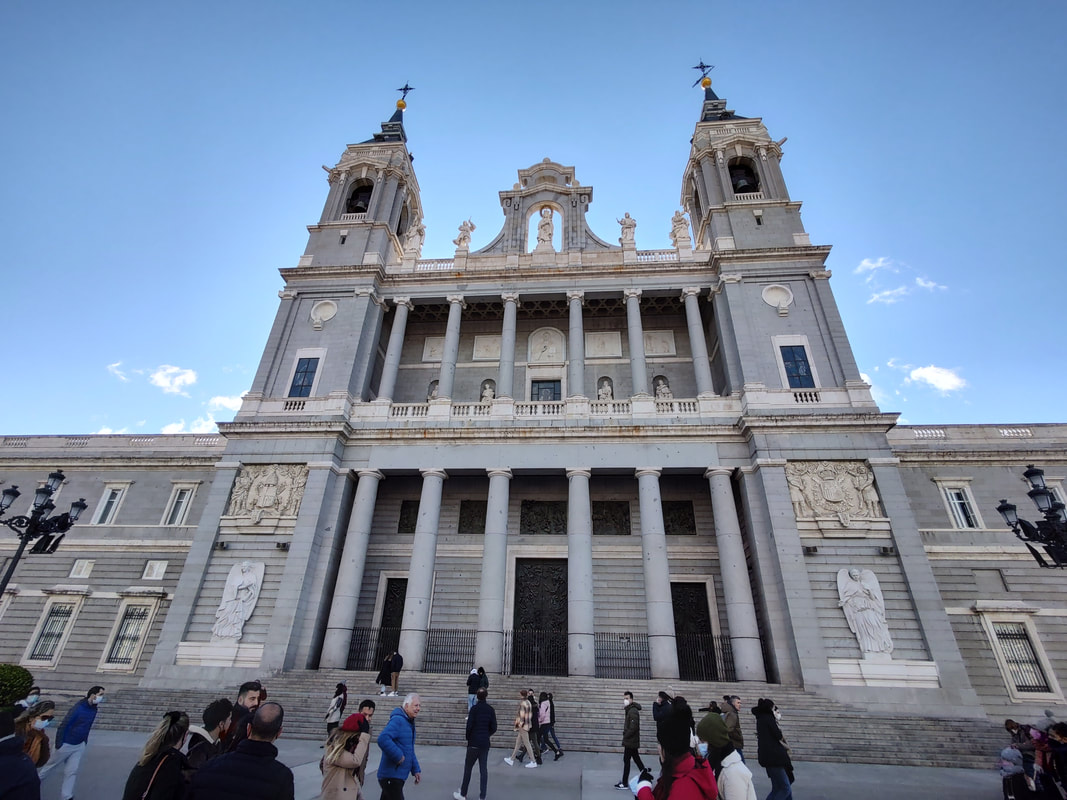 While the palace is hundreds of years old, this cathedral is only 30 years old!
The answer is deceptively simple - money! Even though Spain created an empire in South America and  built more than 40 cities overseas during that century, the cost of expanding and keeping the Empire came first and the construction of Madrid's cathedral was postponed.
Therefore, the seat of the Church in Spain remained in the erstwhile capital  of Toledo and the new capital had no cathedral. All other main Spanish cities had centuries-old cathedrals and Madrid had its own old churches, but the construction of the Almudena cathedral only began in 1879 - even though they had been waffling about the idea since the 16th century. 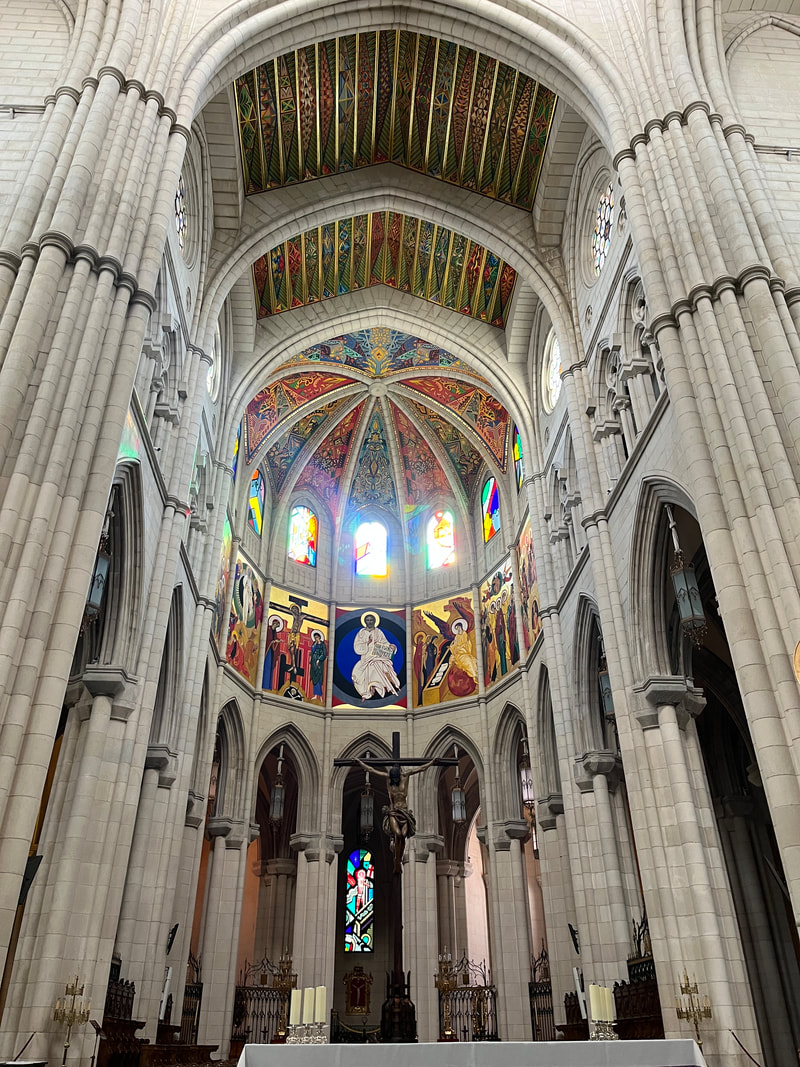 A beautiful mix of ancient and modern
They finally bit the bullet and started construction in 1879 (After they lost their empire!) - and decided to make up for lost time by making it the largest cathedral in Europe - if not the world! Since the Palacio Real was built on the ruins of an old Muslim fortress, the cathedral was also built on the remains of a medieval mosque which was destroyed by the Christians during the reconquista in 1083. 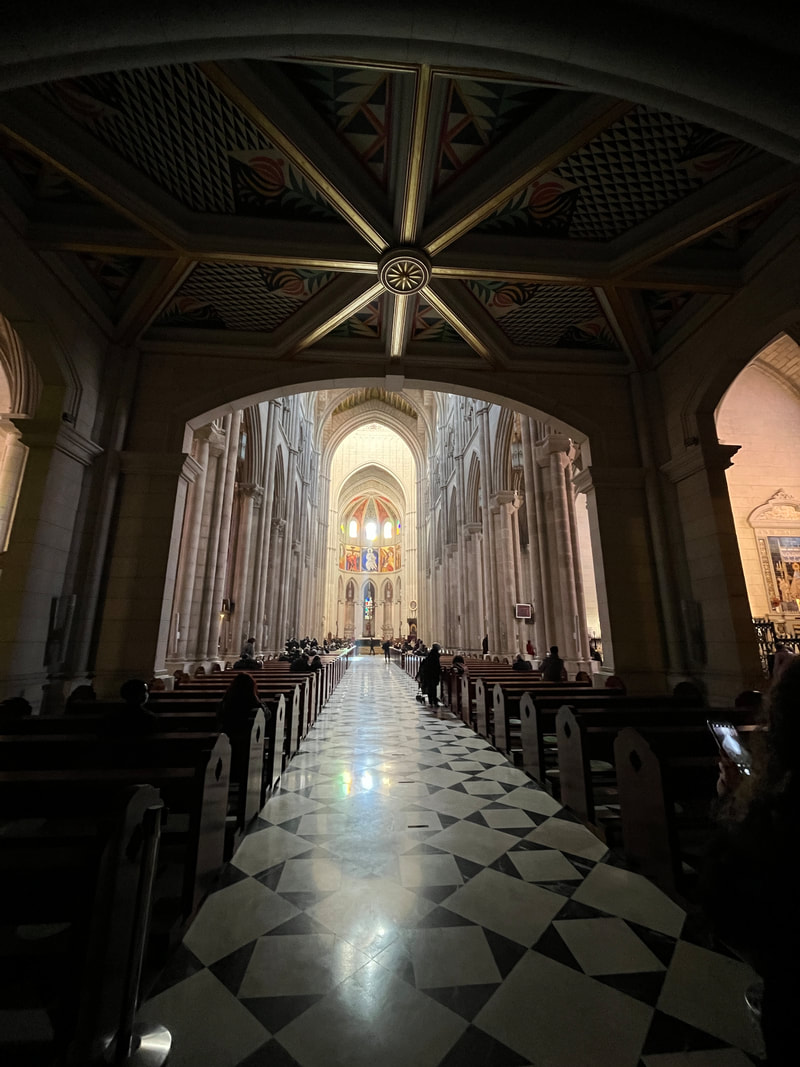 They started building it in 1879 - but then got rather busy in fighting their civil war, and construction halted for years and years, till they again restarted the job seventy years later -  in 1950! The cathedral was finally completed in 1993, and it was consecrated by the then Pope John Paul II. 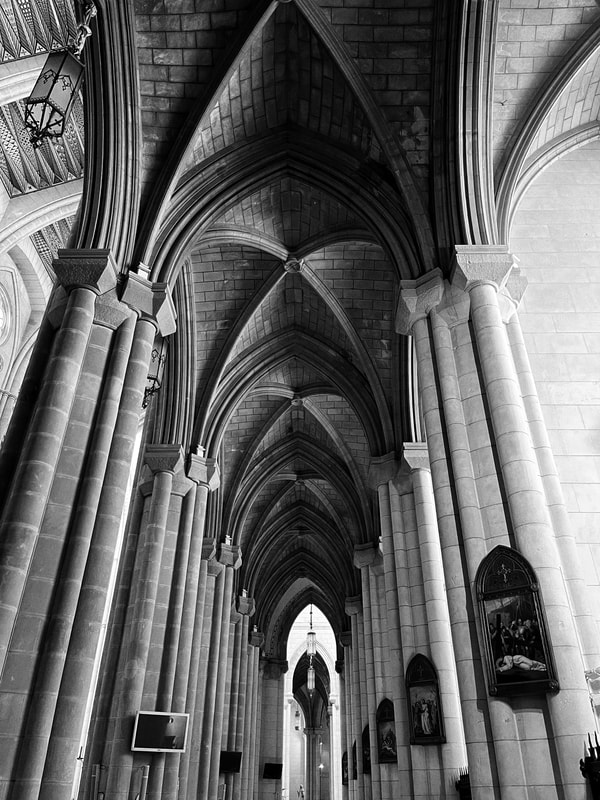 The good thing about it being such a new building is that there are a lot of modern elements, especially in the artwork of the stained glass. The Neo-Gothic interior is uniquely modern, with chapels and statues of contemporary artists, in heterogeneous styles, from historical revivals to pop-art decor. I really liked the cathedral - the mixture of the old world design with its soaring high walls and neo-gothic interior and the modernity of the stained glass art was amazing. 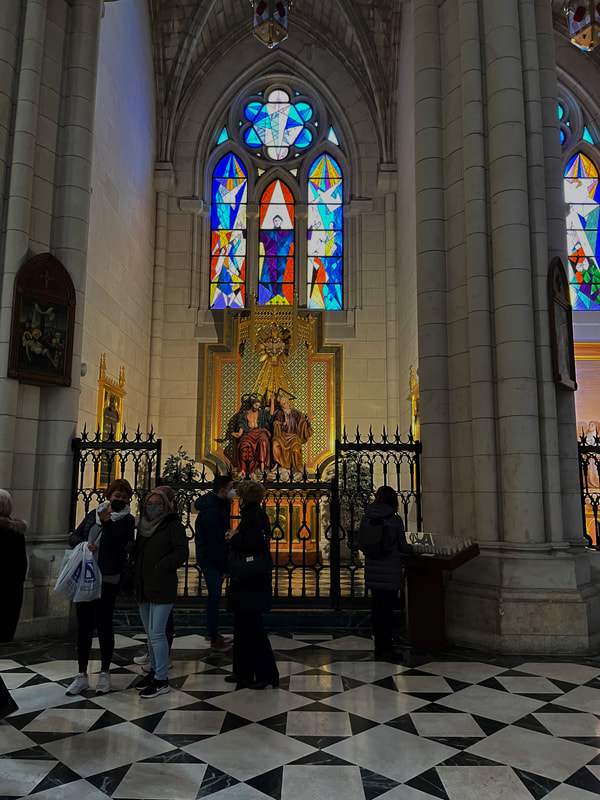 The name of the cathedral had also intrigued me - as Almudena sounded a lot like ‘Al Madina’  - a very Muslim name. It turned out that the church is dedicated to Mary as the ‘Virgin of Almudena’. The name  ‘Almudena’  is derived from the Arabic term  Al Mudayna - ‘the citadel’. And ‘Madina’ is of course, the name of the  second holiest city in Islam, after Mecca … which also means ‘citadel’  - and I thought that this was a very interesting amalgamation of the two cultures. 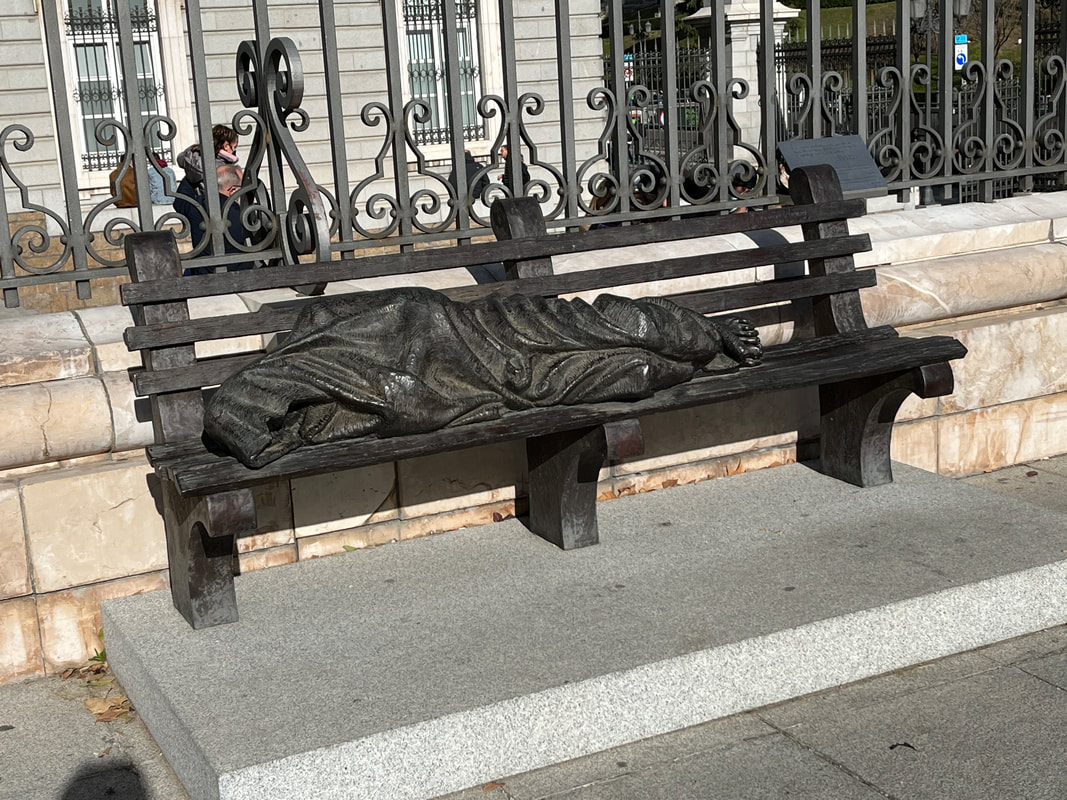