After an intense couple of days, its ‘adios Madrid’ for now 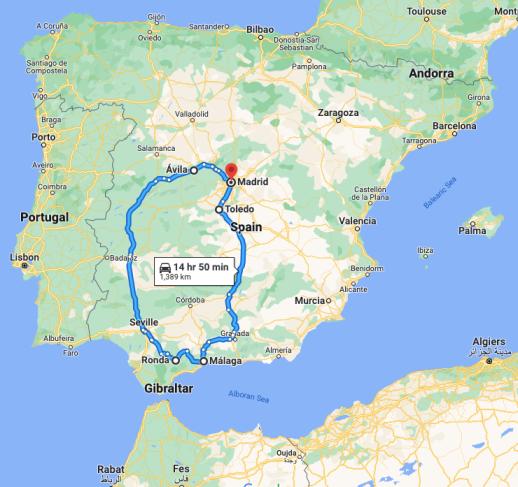 t was time to go to the train station and catch a train to Avila.
​I could get to the Principe Pio train station by metro, but that would  involve changing trains a  couple of times as Principe Pio was on a different metro line (Those colours again!)  - and  the Uber rate was very reasonable - so I booked a cab and went in comfort in a fancy car instead of struggling in a crowded metro and changing trains a couple of time and so forth. 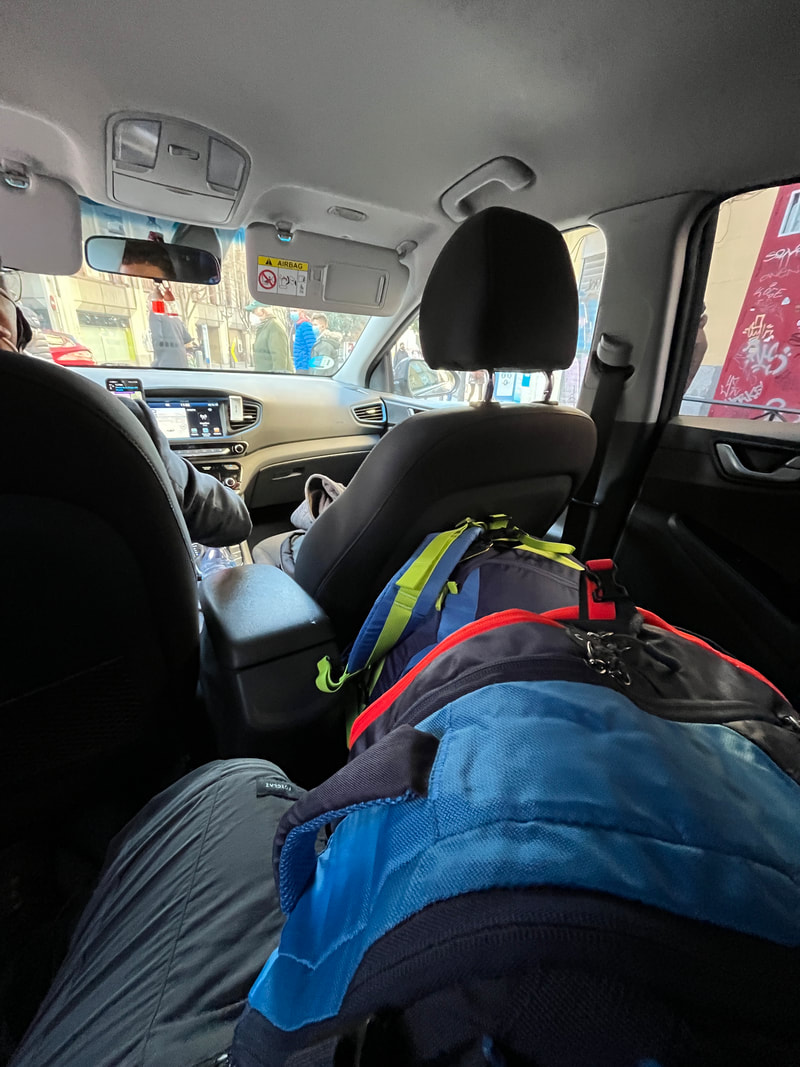 it was named after the  neighbouring Príncipe Pío hill …which in turn was named for its former owner, Italian prince (‘Principe’)  Francesco Pio di Savoia.

I found it quite sweet that a station owned by the Spanish government railway company is named after an Italian nobleman, and one of the bridges nearby is called ‘Bridge of the Frenchmen’ (Puente de los Franceses) -  as it was built by french engineers. It seems to embody the connectedness of Europe. 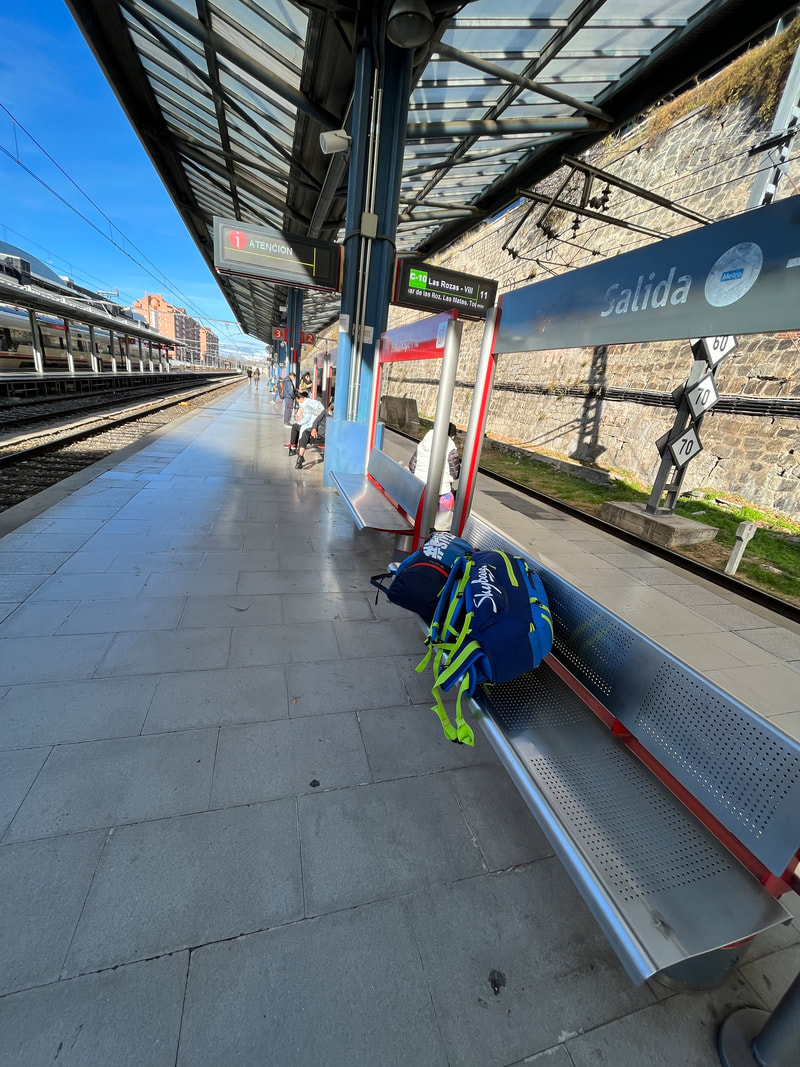 The Principe Pio station was pretty busy - but the train to Avila came at a rather deserted platform away from the main part of the station, so it was like waiting at a little country town rather than in a busy metro. 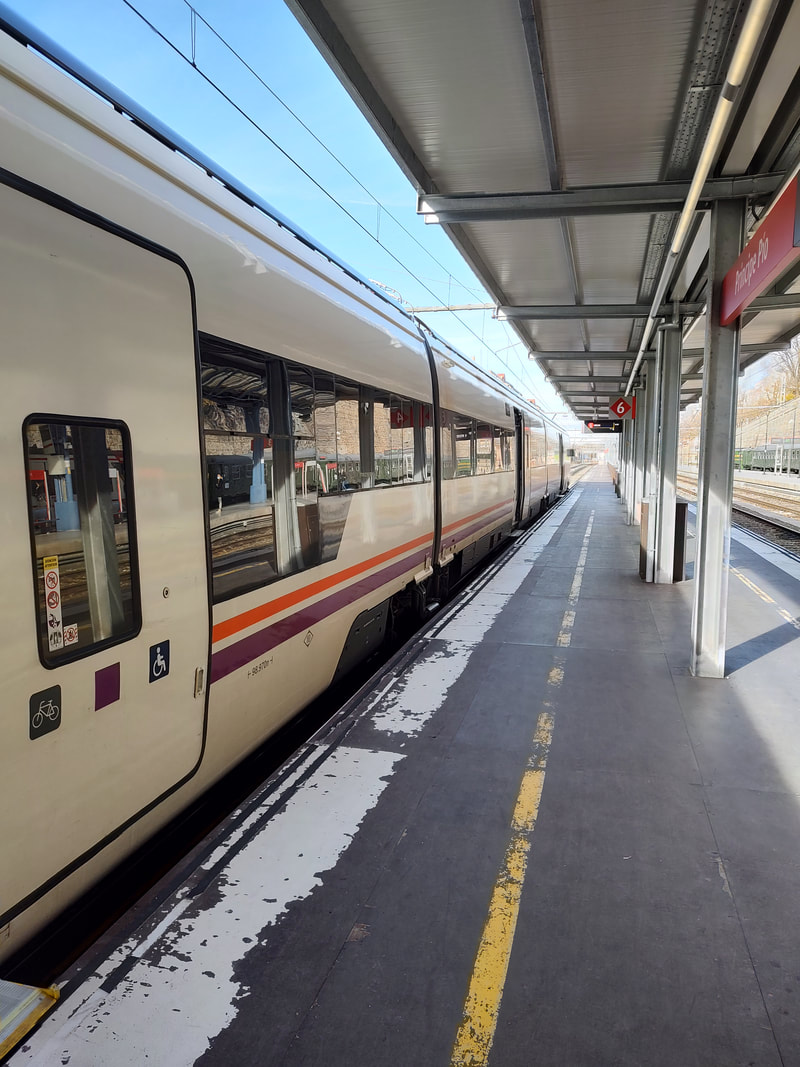 The train journey to Avila was very smooth.  Spanish trains are very nice - comfortable, roomy and very fast! Even this little train to a little town was very nice and it soon deposited me at Avila station, where I emerged blinking into the sunlight. 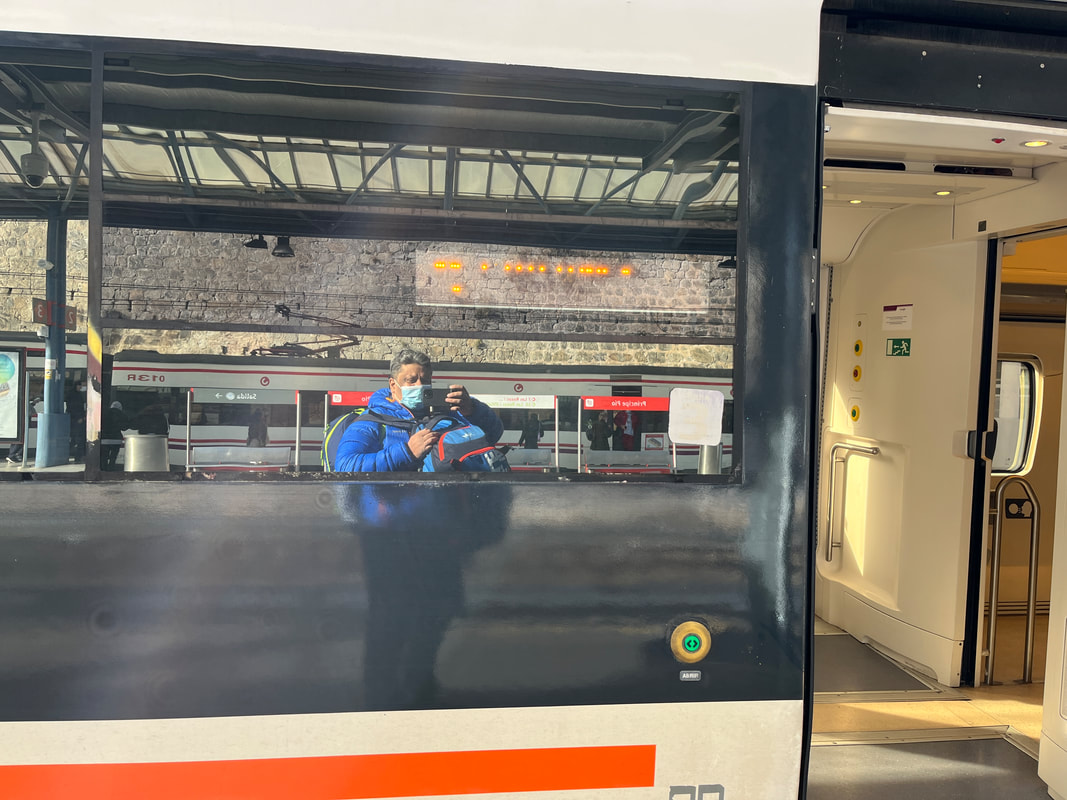 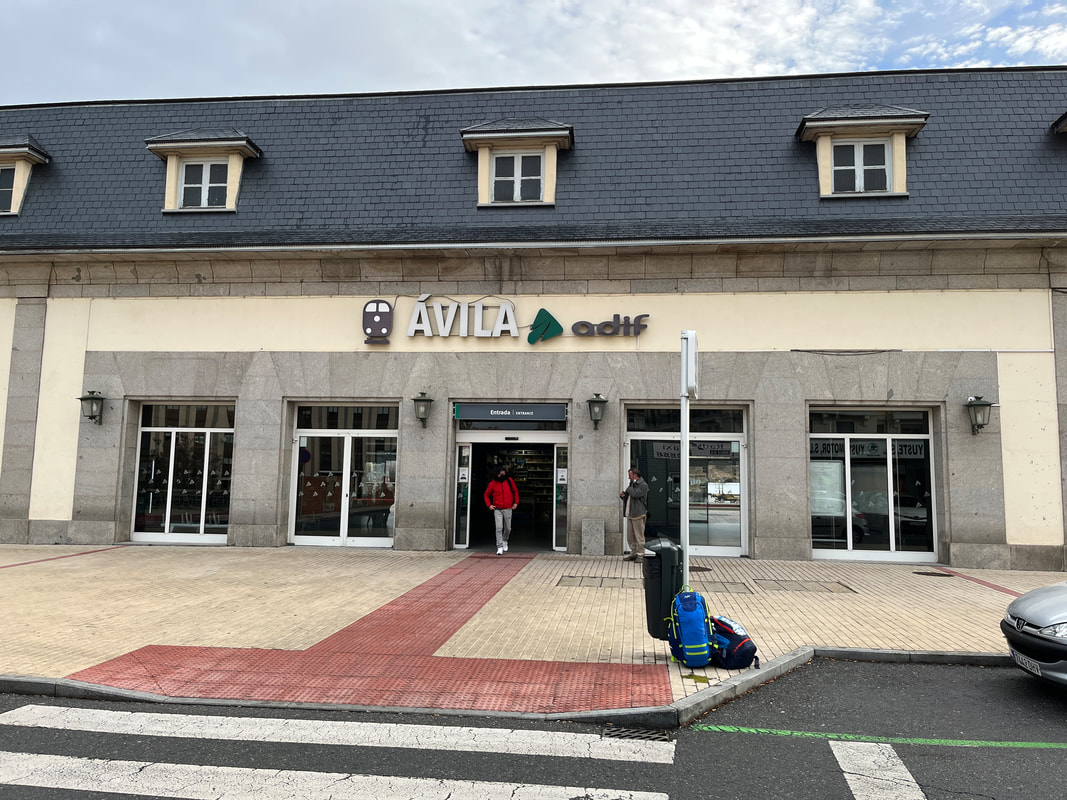 The bus dropped me just outside the fortified old city and I gaped up at the impressive stone walls.
I read a sign that said that Avila is ‘the town of  stoned saints.’
Wait…what?
No no…the sign said that  Ávila is called ‘the town of stones and saints’
​Oh. Ah. 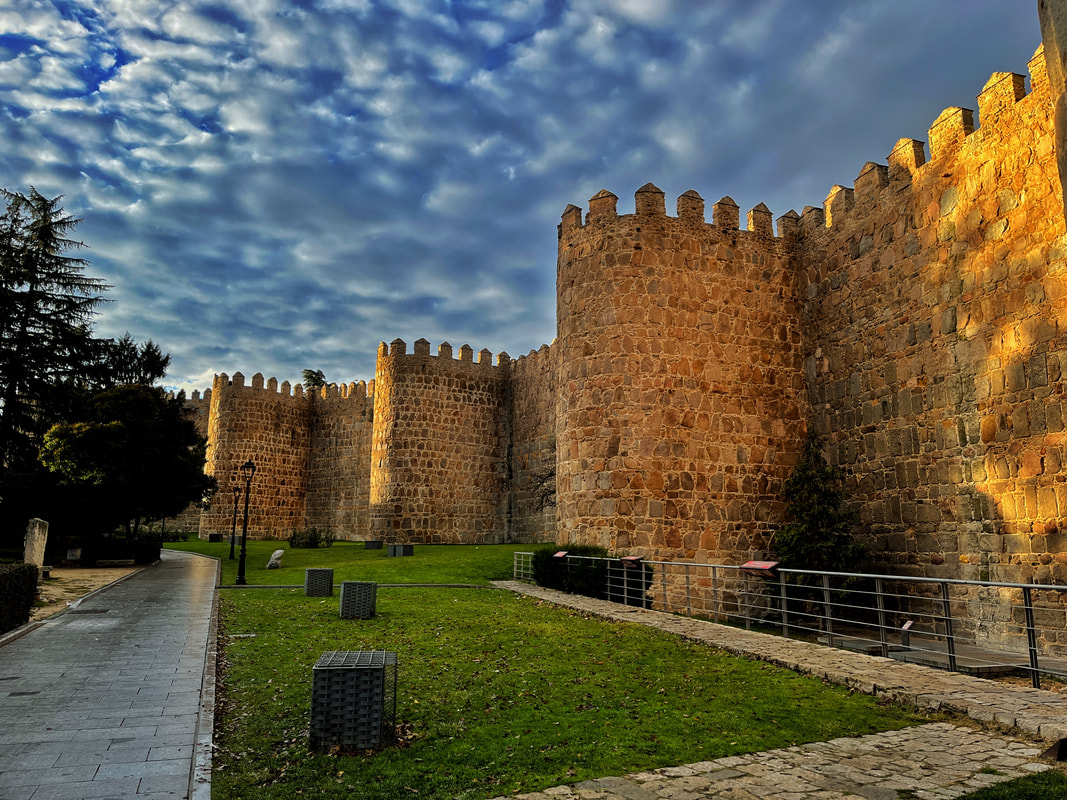 The ancient walled city
It is a very ancient town - it is on a natural high ground and is next to a river,  and hence had been used as a fort from pre-Roman times - and people seem to have been attacking it for all the 2000 years! It had had been conquered over the 2000 years by Roman, Visigoths, Iberian christian kingdoms, Roman Catholic kingdoms, and even by rebel troops in the Spanish civil war! 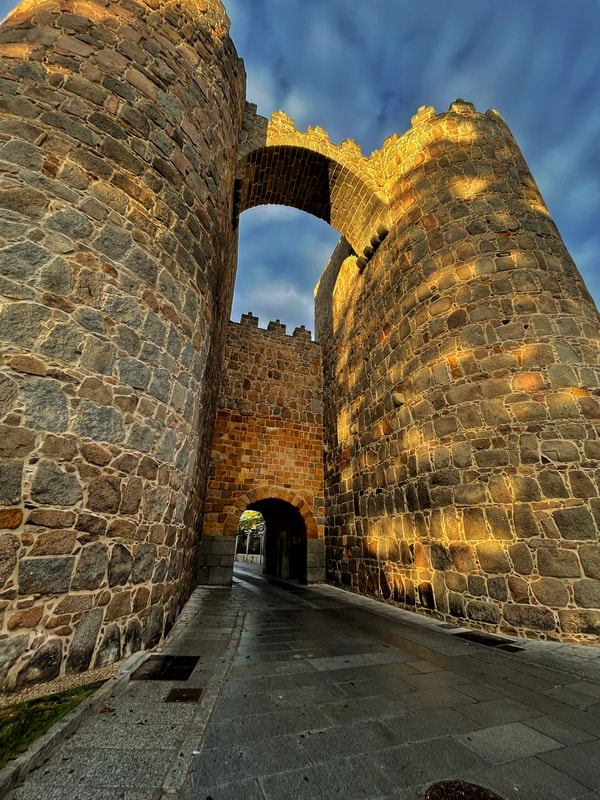 It has been a city from pre-Roman times
Now of course, its violent days are behind it and it is invaded only by tourists, who come to admire the architecture of the fort and the cathedral.
​It is so awesome,  that it has been declared a UNESCO ‘World Heritage Site’. 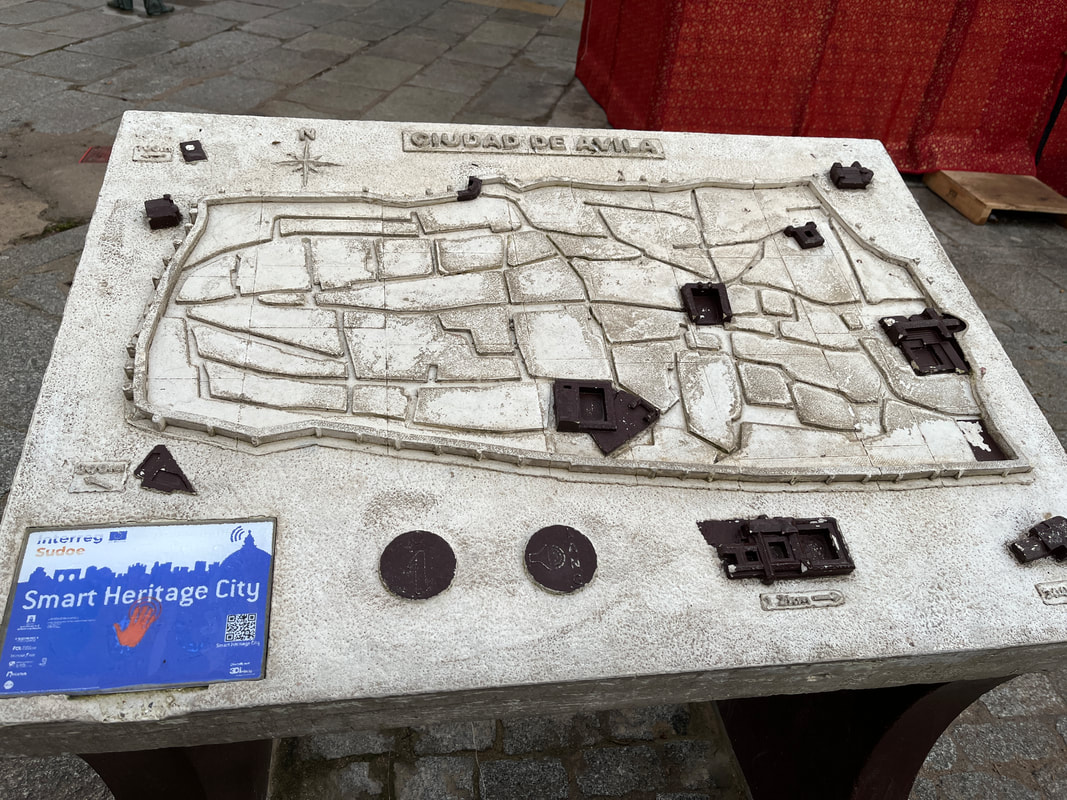 It must have been quite an impregnable bastion
As I mentioned earlier - It is a very old town, and tt was amongst the first towns to convert to Christianity - right in the 1st century itself.
Perhaps because of this, it boasts one of the oldest and greatest cathedrals in the country - the majestic Avila cathedral. The cathedral is built like a fort and is indeed a part of the fortified walls - inevitable perhaps due to the constant conflict there, as the place was repeatedly attacked by anybody and everybody who passed by there.
My jaw dropped as I reached the place - what an imposing pile! They charged me 6 Euro to enter the place, and gave me a QR code which could be scanned to enter a web page which had a free audio guide about the place. That was a very cool innovation - instead of them giving you one of those ‘Audio guide’ players - you just access the webpage on your mobile phone and listen to the audio guide recordings on your own device! The church does not have to invest in buying and maintaining multiple audio equipment and also does not need a bunch of staff to hand out and collect the hardware. 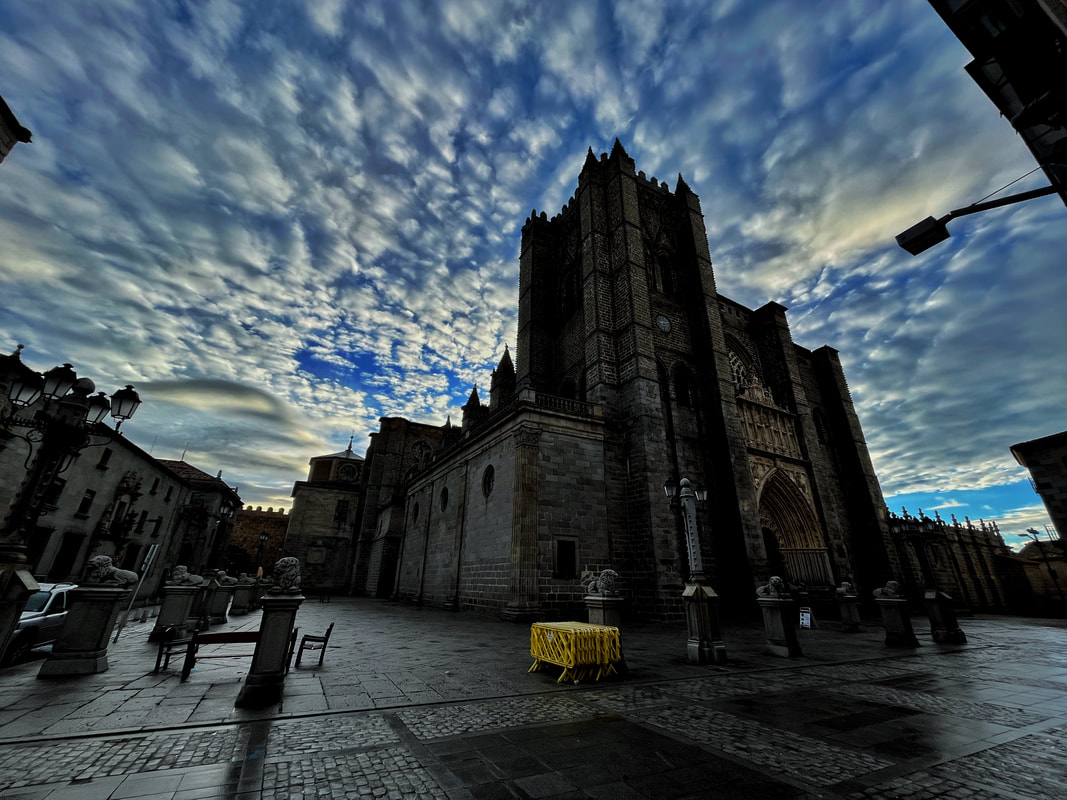 The amazing Avila cathedral
Cathedrals are built to be grand and imposing! In medieval times, the cathedral, along with some of the abbey churches, was the largest building in any region. The cathedral was created to the glory of God. It was seen as appropriate that it should be as grand and as beautiful as wealth and skill could make it! 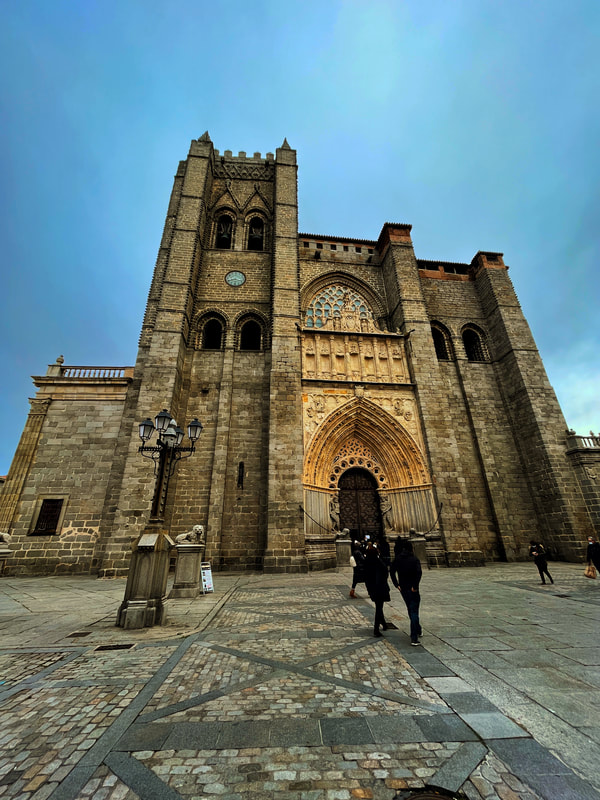 A marvel of medieval architecture
The Gothic cathedral was one of the most awe-inspiring achievements of medieval technology. Architects and engineers built churches from skeletal stone ribs composed of pointed arches, ribbed vaults, and flying buttresses to create soaring vertical interiors, colourful windows, and an environment celebrating the mystery and sacred nature of light. 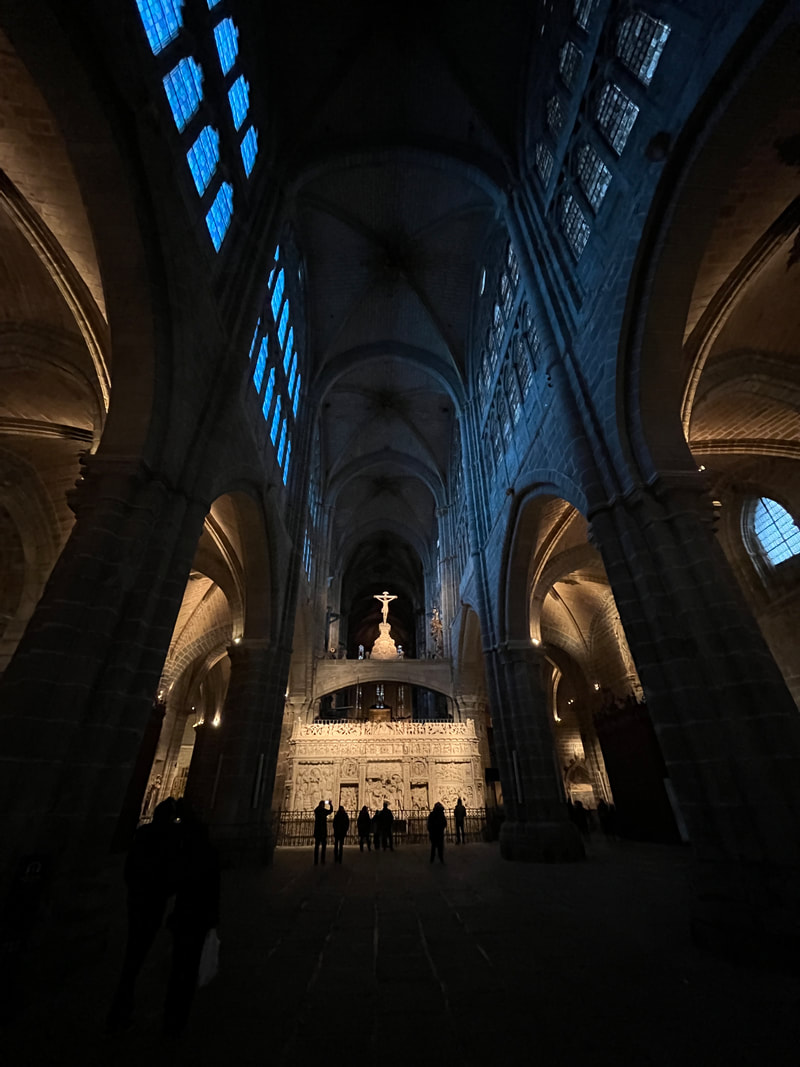 The interior just overwhelms
Based on empirical technology, the medieval cathedral provided the Middle Ages with an impressive house of worship, a community center, a symbol of religious and civic pride, and a constant reminder of the power and presence of God and the church. 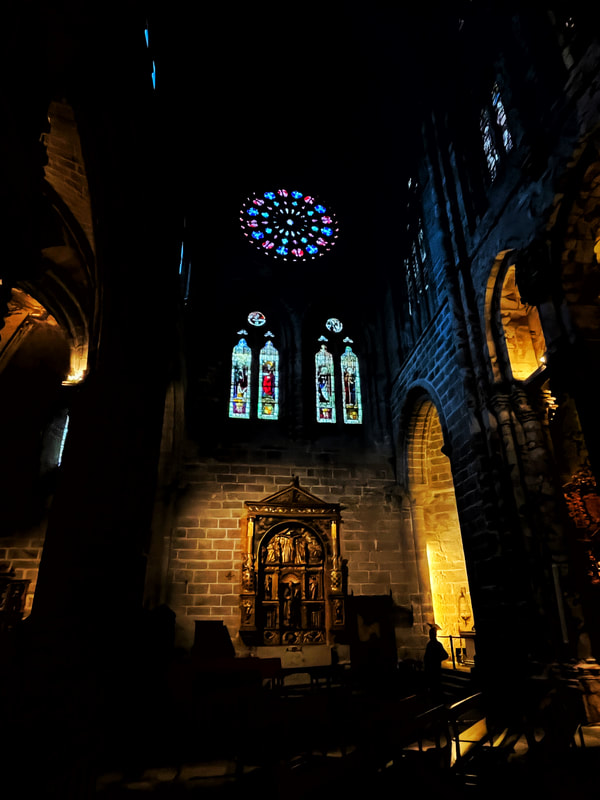 The  awesome and intricate stained glass windows not only told stories, but also added a wonderful effect to the light inside the building!  The special qualities of changing color tones and glowing window glass in all of the stained glass windows created a visual experience with mystical and magical qualities that transported a viewer into a world far different from his or her mundane medieval surroundings.
The Gothic cathedral was filled with paintings and sculptures illustrating scenes from the bible or other holy stories of martyrs and saints. For many people of the Middle Ages, the cathedral became the poor man's Bible. 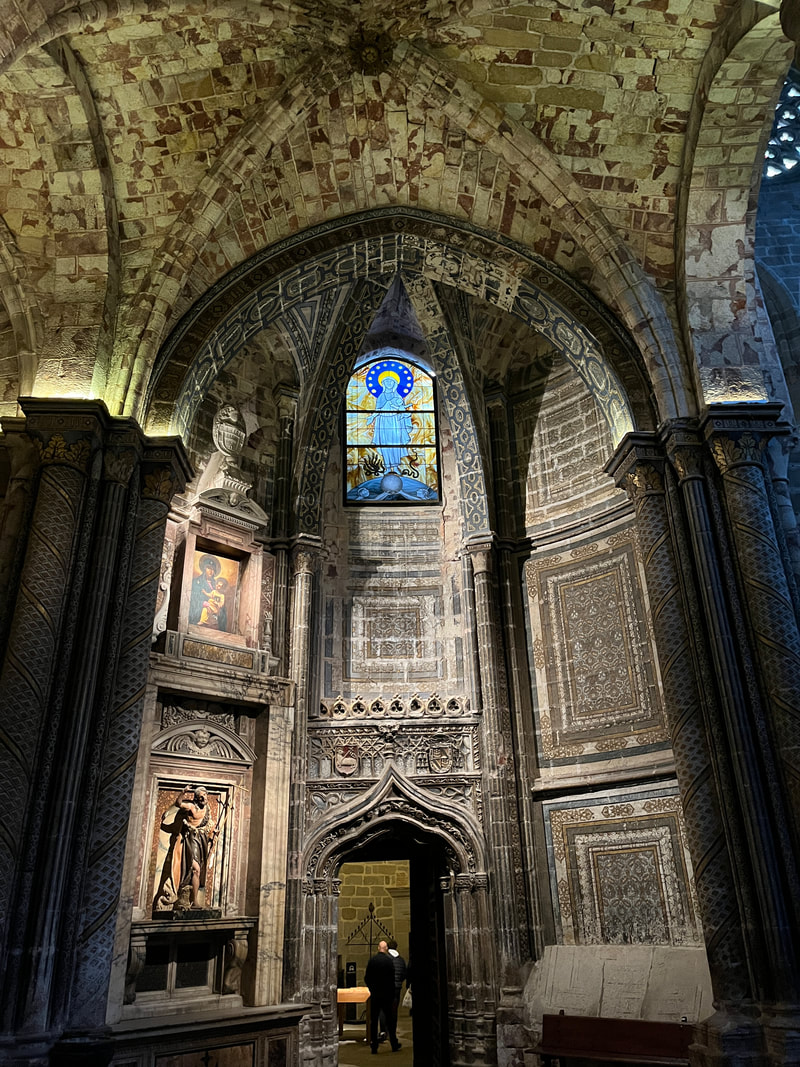 Just imagine the awe of the peasants and common people  who came from their huts and small tenements, and then entered this majestic space!
The cathedral is a marvel of an empirical technology, using simple tools and skilled craftsmen aided by a large labor force, and remains an impressive example of the interaction of technology and religion. 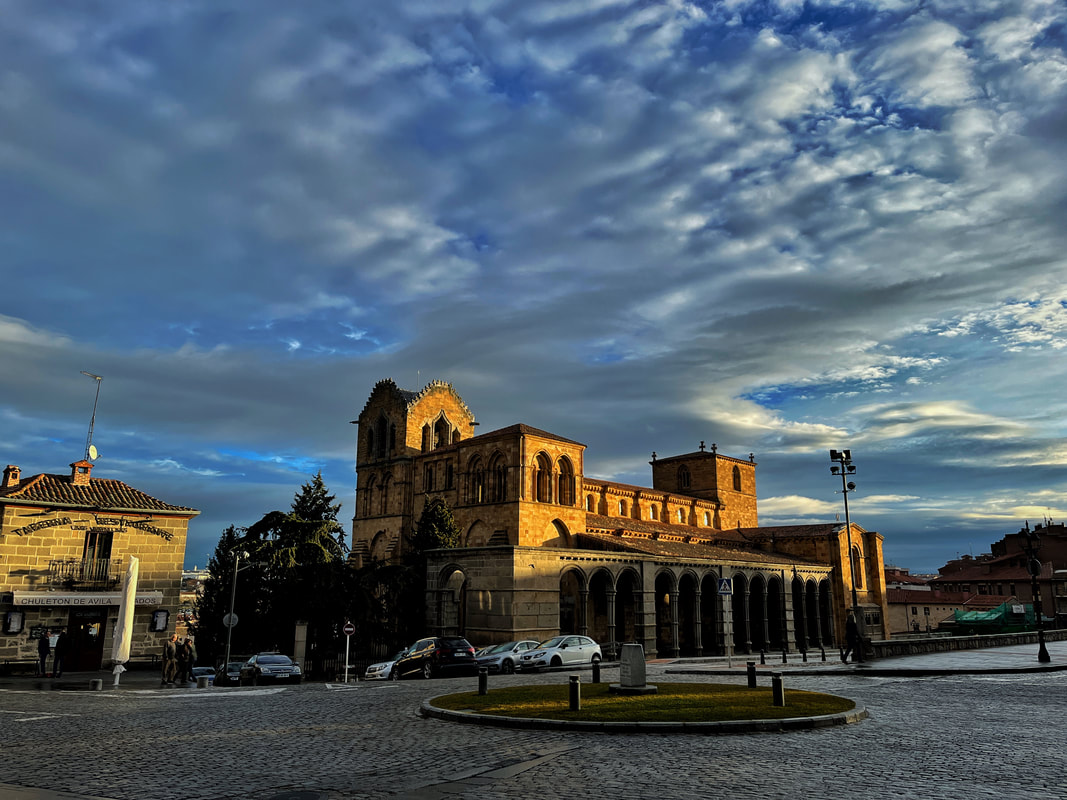 Just outside the walled city, there is the Basilica of San Vicente 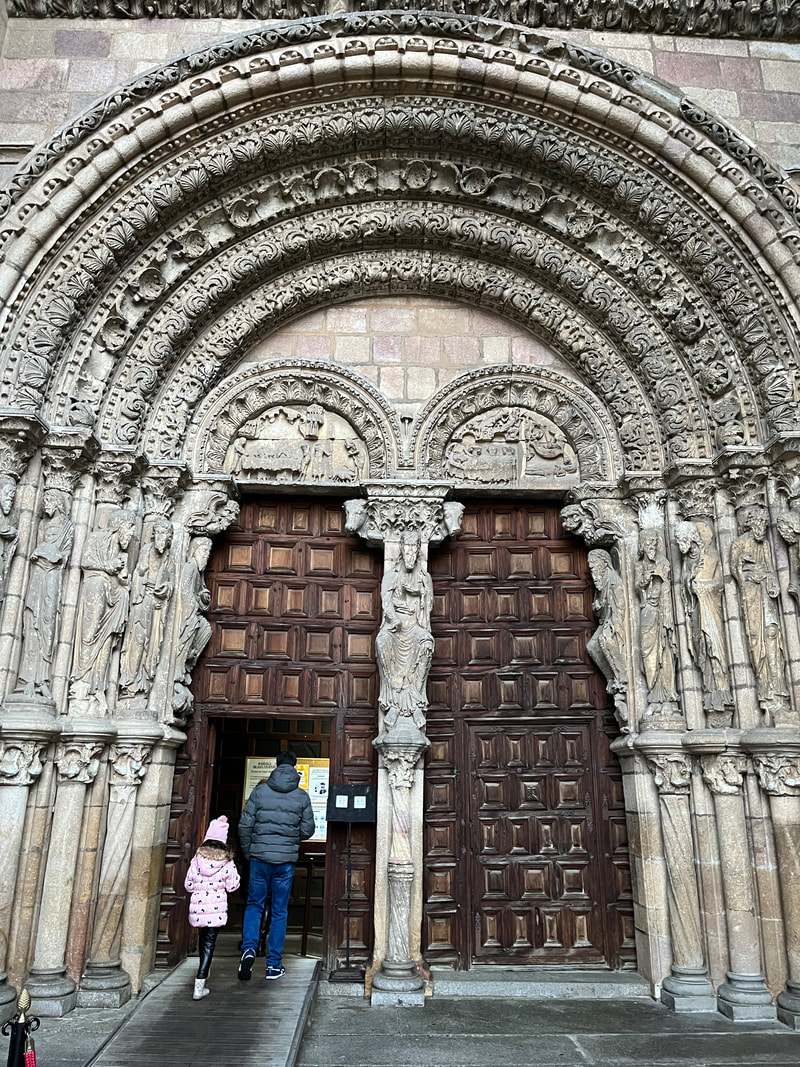 It is dedicated to a trio of martyrs ( Vicente and his two sisters - Sabina and Cristeta). According to legend, Vicente refused to partake in pagan rituals and was thus imprisoned. (I wondered what was this ‘pagan ritual’ that he so objected to? A fertility rite? A party? A human sacrifice?)  While imprisoned, he was visited by his sisters who aided in his escape to Avila. The siblings were caught shortly after their escape, and tortured and executed.
After the saint's martyrdom, their bodies were guarded by a snake sent by God, until they were discovered by a Jew. The snake attacked him and only released him once he called unto Christ. The Jew thus converted to Christianity  and built a basilica for the saints, so they could receive a proper burial there.
I went out thinking about patriarchy. His sisters were also tortured and killed in the same way as Vicente -  but no one calls it the Basilica of Vicente, Sabina and Cristeta. Only the guy gets naming rights! And no one even cares about the name of the poor Jew! 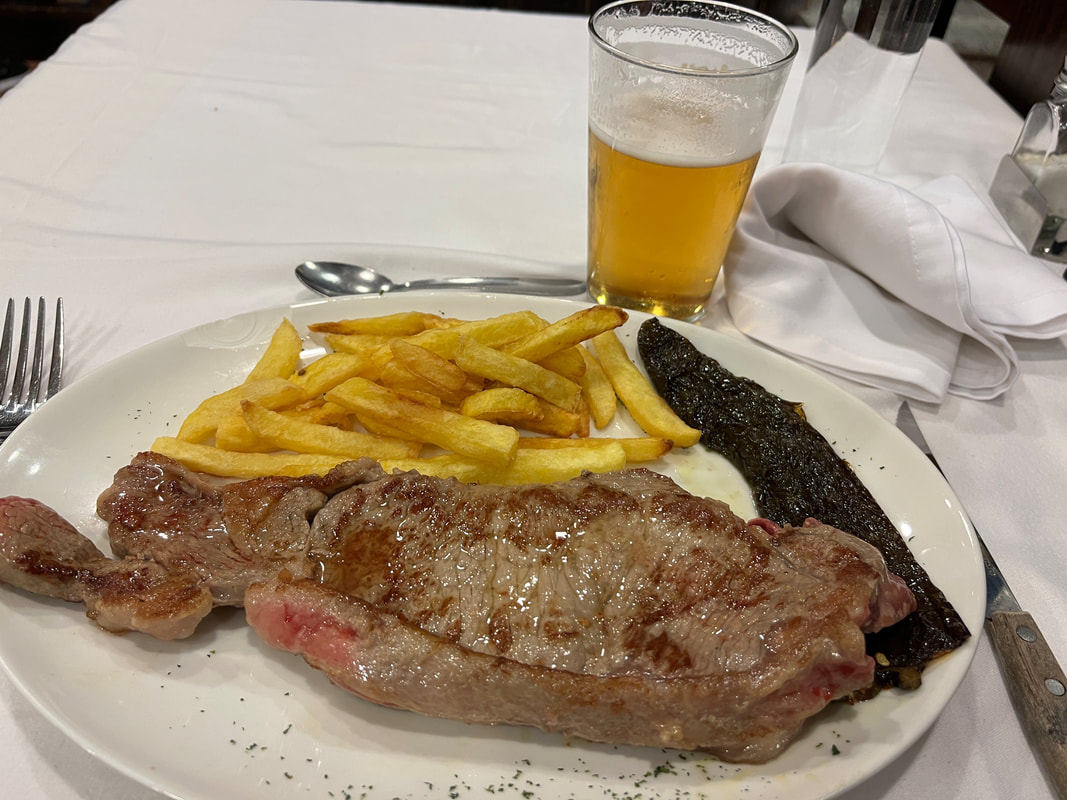 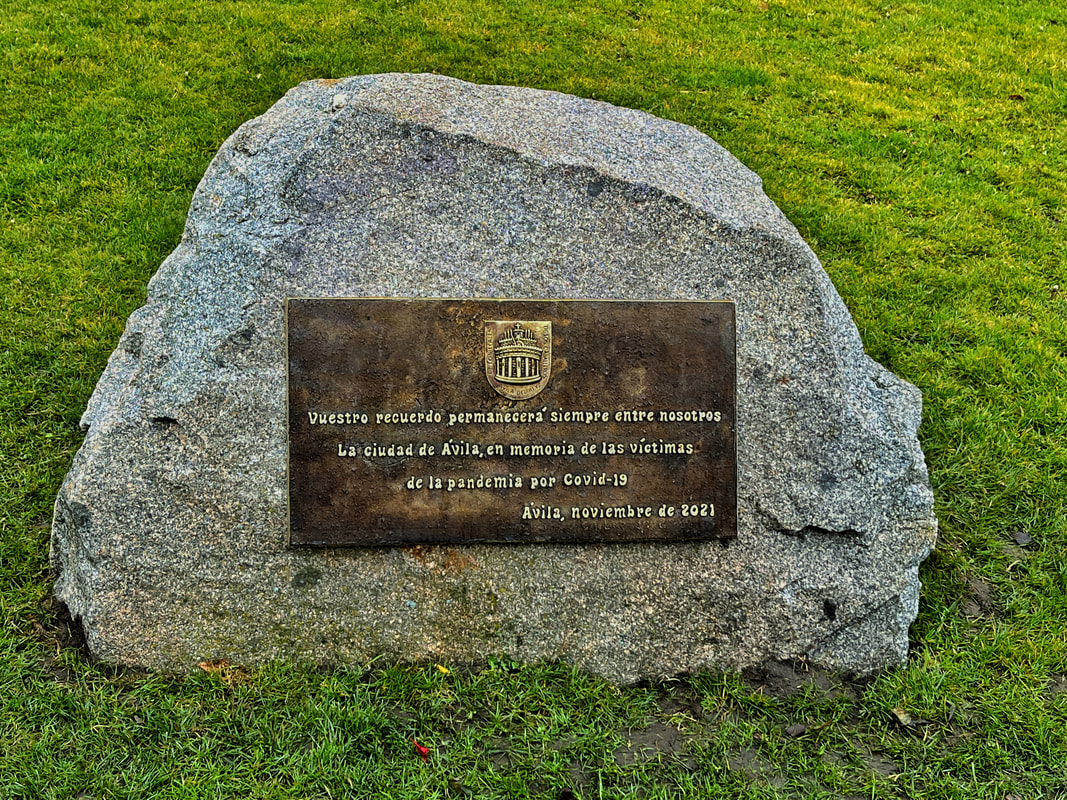