The train back to Madrid was totally full! Each and every seat taken! So much for Covid.
It looked like the whole country had just shrugged its shoulders in that typically Spanish fashion and said ‘Ah …fuck it’ and set out to enjoy the holidays. Clearly there was no fear of pandemic to be seen anywhere.
And that’s really nice.
​It’s not good for the human psyche to be so afraid of the invisible bogeyman and sit inside your house, spraying disinfectant every two hours.  Take precautions, of course - but carry on with life as well. 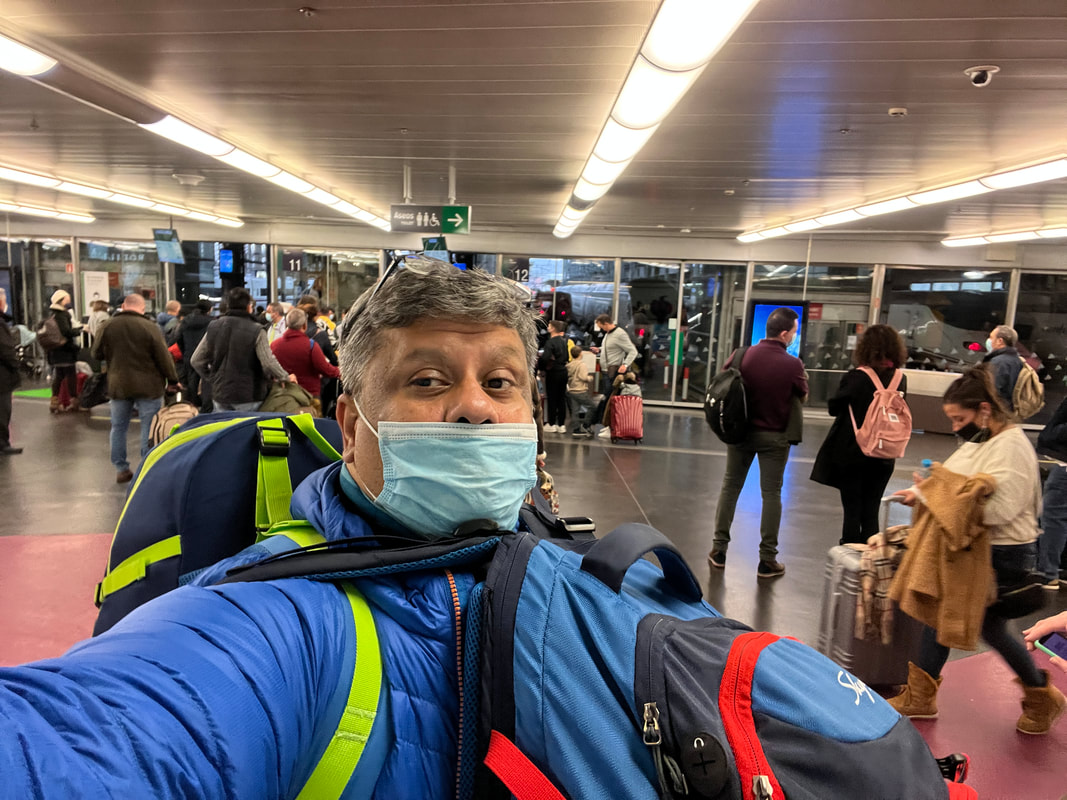 Lunch! Ah lunch! Time to hit the cafeteria.
I was very impressed when I saw the size and scale of the railway cafeteria! Wow! What a huge place. And all hot food too - I had been expecting some packed sandwiches and stuff. This was as good as any restaurant!
I decided to have a ‘Menu Del Dia’ - the menu of the day. In Spain, the ‘menu del dia’ or ‘menu of the day’ is offered at restaurants during the midday meal. And this  is the most economical way to eat in Spain. The menu del dia is compulsory by law!  The law was passed in 1965 - and set standards and pricing for the midday meal to benefit tourism. While initially targeting tourist areas, it became popular throughout Spain by the early 1970s. It also provided a good meal at a reasonable price for workers who couldn't go home for the midday meal.
It normally includes soup or salad, bread, main course with a side dish, dessert, and coffee. Wine or water is included. Usually, you will have two or more choices for the courses. The railway restaurant was offering the Menu Del Dia for 12 Euro - and that sounded like a good deal. Communication was always a bit of a problem in Spain because I don’t speak Spanish and very few Spaniards speak English - so I used to manage with expressions and gestures and a lot of hand waving. That worked pretty well - of course there were some hiccups now and then, such as the fact that the Menu del dia ended up costing 18 Euro instead of 12, because one dish I had chosen was not part of the set menu. .
A good piece of advice to anyone visiting Spain is always to investigate the ‘menu del dia’ in any restaurant - it is very good value.

​The cruel stroke was the dessert though - I had thought that it would be a delicious caramel custard - but the bloody thing turned out to be a disgusting rice pudding with cinnamon powder on top. What a disappointment. 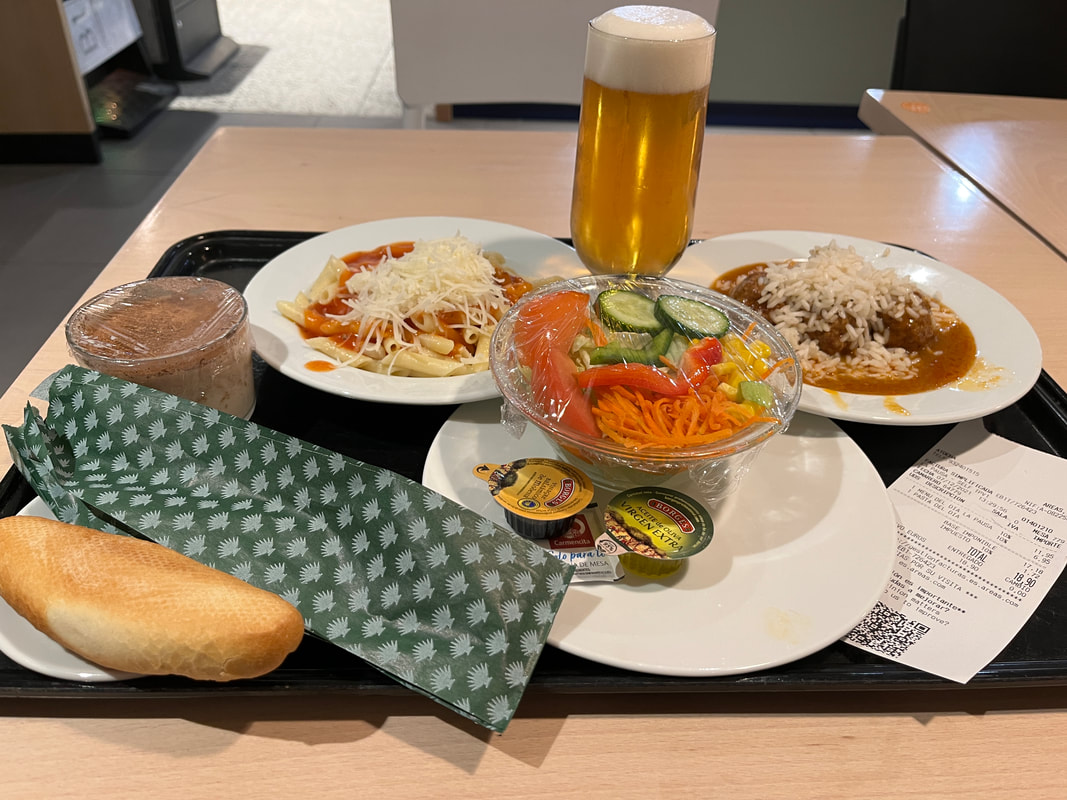 Ronda is also a pretty ancient place, with remains of prehistoric settlements dating to the Neolithic Age. It was settled by the Celts in the 6th century BC. I found it quite cool that this little town in Spain was founded by the same people who are now to be found mainly in Scotland and Ireland. Today one would not think that Spaniards and Scots and Irish are the same people.
In their heyday, Celts were spread all over southern Europe, the British isles and even Anatolia, which is now part of Turkey! After that it followed the normal chain of events of Europe and changed hands between the Phoenicians, Romans, Visigoths and the Islamic Berbers.
The berbers called it Hisn Ar-Runda (Castle of Runda) 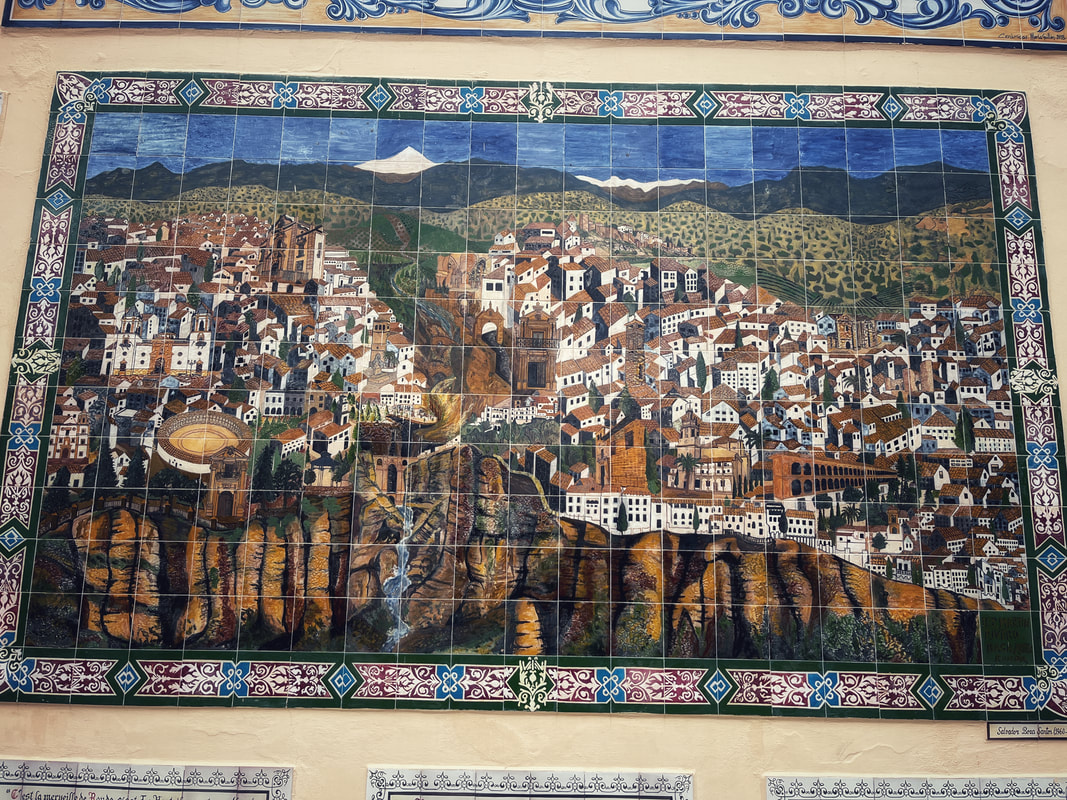 The most famous thing about Ronda though, are its huge stone bridges. The town is divided in two parts by the deep gorge of the Guadalevin river. In olden days it would have been a huge pain to go from one part to the other. You would have to go all the way down the mountain, ford the river, and then climb all the way up. Doing this time and time again would get old real soon!
So the various rulers of the place got busy building bridges - you have the ancient Roman bridge, the ‘Puerto Romano’ … also known as the ‘Puente Arabe’  (Arabic Bridge)  as the foundation is Roman and was later rebuilt above in the Arabic Period. 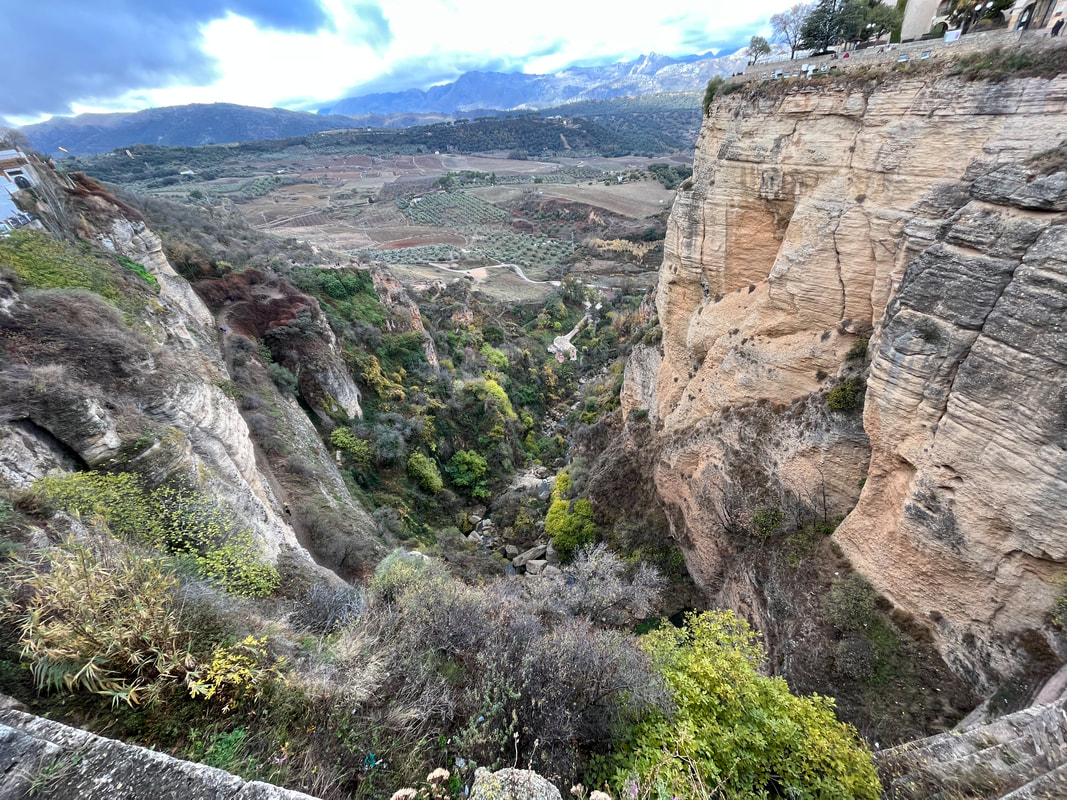 Then you have the. Puente Viejo - the ‘Old Bridge’  and  the  Puente Nuevo ‘New Bridge’, which span the canyon. The term ‘New bridge’  is something of a misnomer, as it is not exactly new.  It was built more than 200 years ago!
But it is this Puente Nuevo which is the one worth seeing!
I turned a corner and gasped as I saw the bridge!  OH WOW!
​It was amazing! 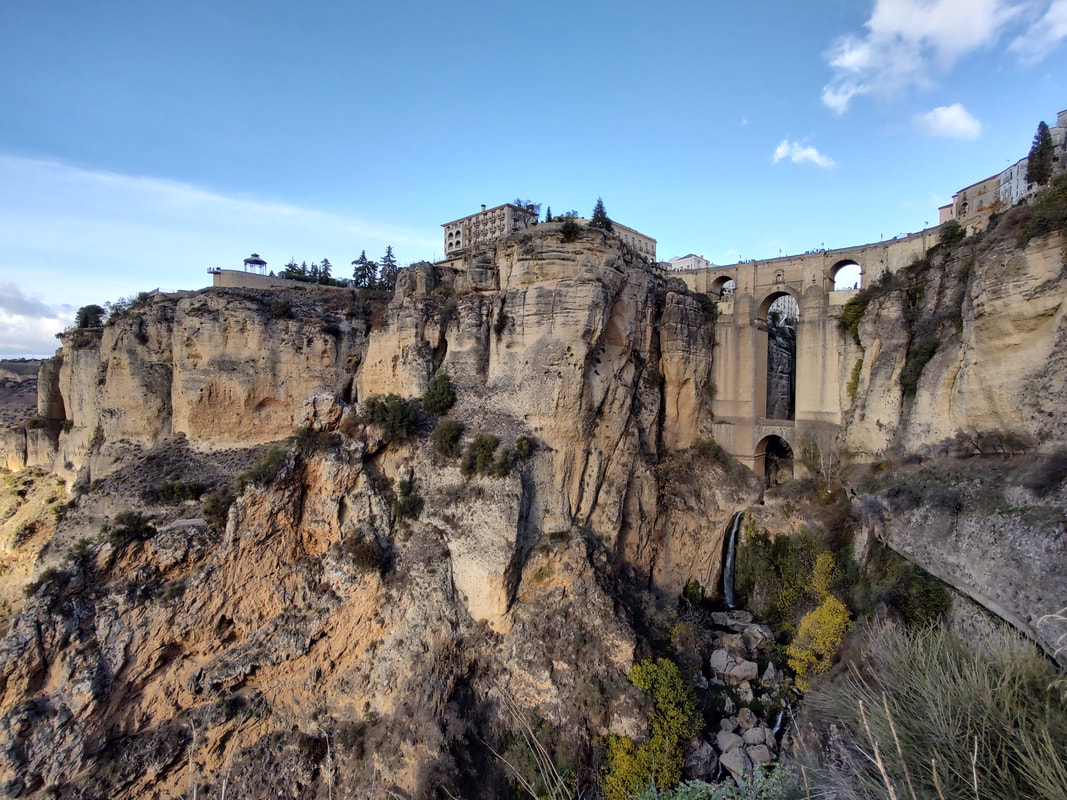 It is made of the same stone as the hills and looks as if it was a natural phenomenon, a part of the mountain itself. Most bridges today are made of concrete and steel and bricks and whatnot, and are clearly an artificial creation. Some are beautiful - many are ugly  - but this…this looks alive and natural! The construction was started in 1759 and took 34 years to complete. 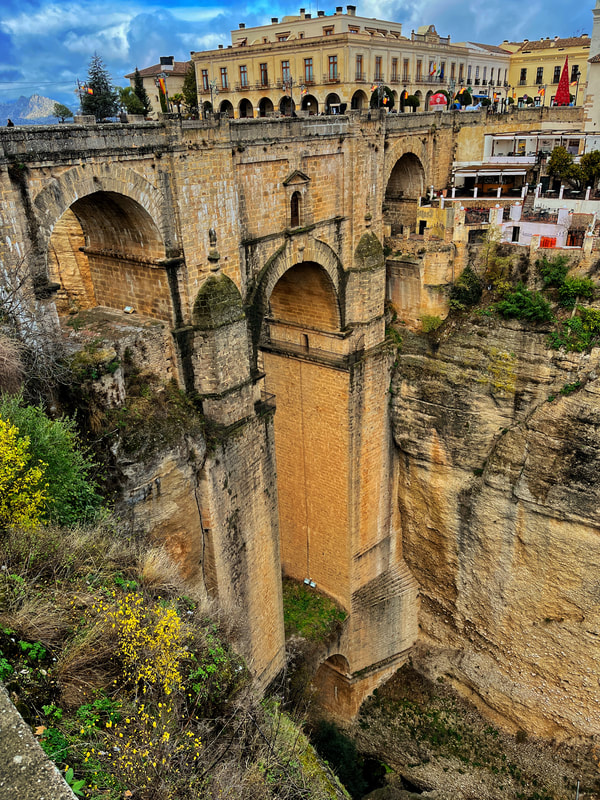 The most interesting part of the bridge is a chamber above the central arch that was used for a variety of purposes, including as a prison - and as an execution dock! During the 1936–1939 civil war both sides allegedly used the prison as a torture chamber for captured opponents, killing some by throwing them from the windows to the rocks at the bottom of the El Tajo gorge!
Flying lessons! Everybody failed!
​Hemingway wrote about these horrific episodes in his book  ‘For whom the bell tolls’ which is set in the milieu of the Spanish civil war 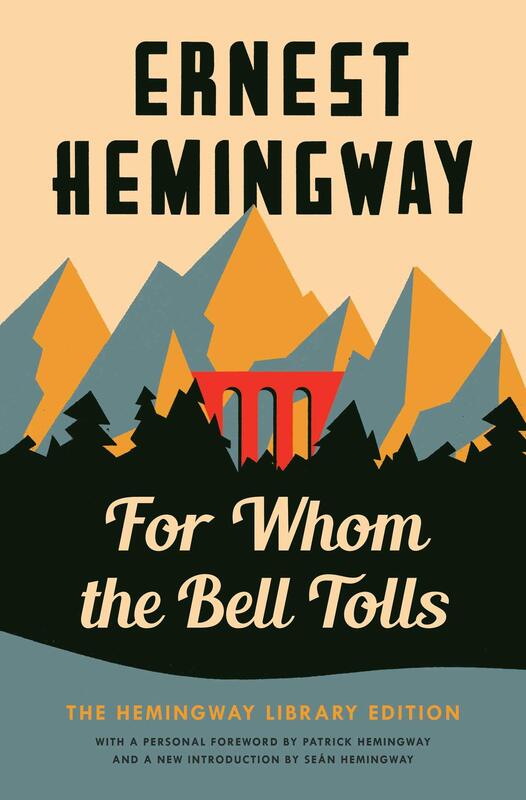 I walked all around the town and explored it from the inside and outside - and even found myself at the bottom of the gorge looking up at the bridge from below! It was lovely! There were a couple of cats sitting on a wall and looking curiously at me and I went to make friends with them. After a few minutes of watching me go ‘puss puss puss’ one of them finally deigned to come over and get caressed by me. Cool, I thought - finally someone in Ronda is making friends with me.
And I could now truthfully say that I was well acquainted with Spanish pussy! 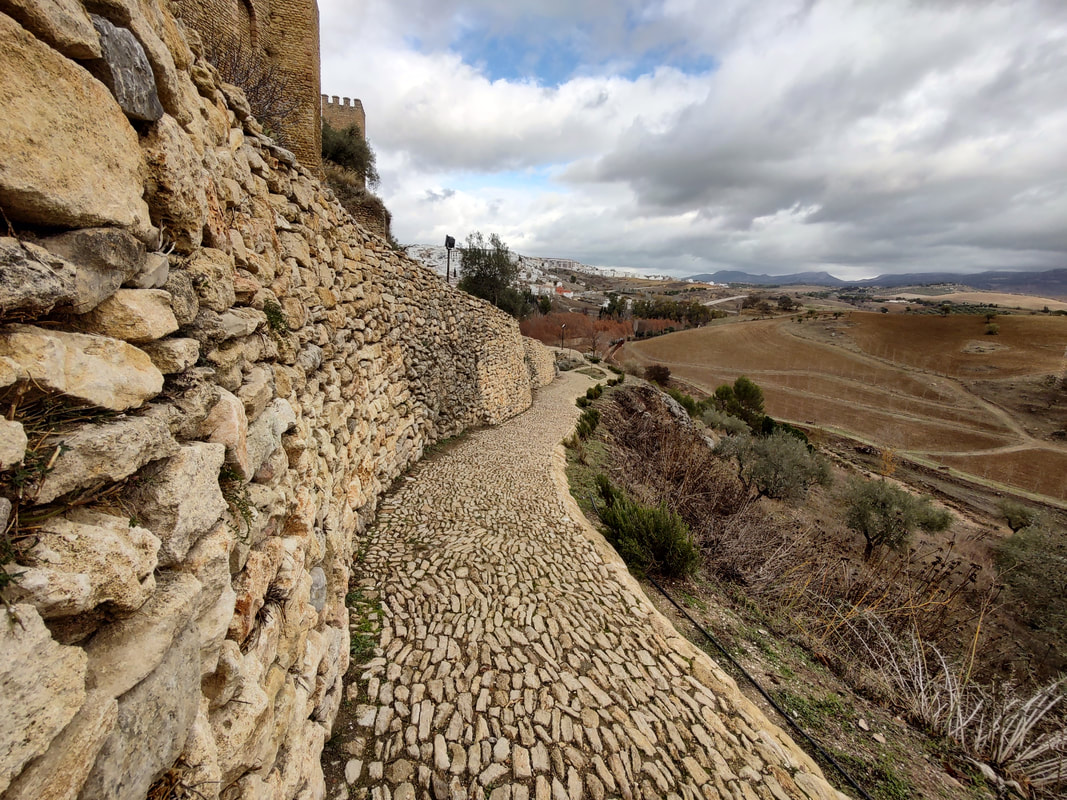 The ancient Moorish fort - its now a lovely place full of atmospheric restaurants. 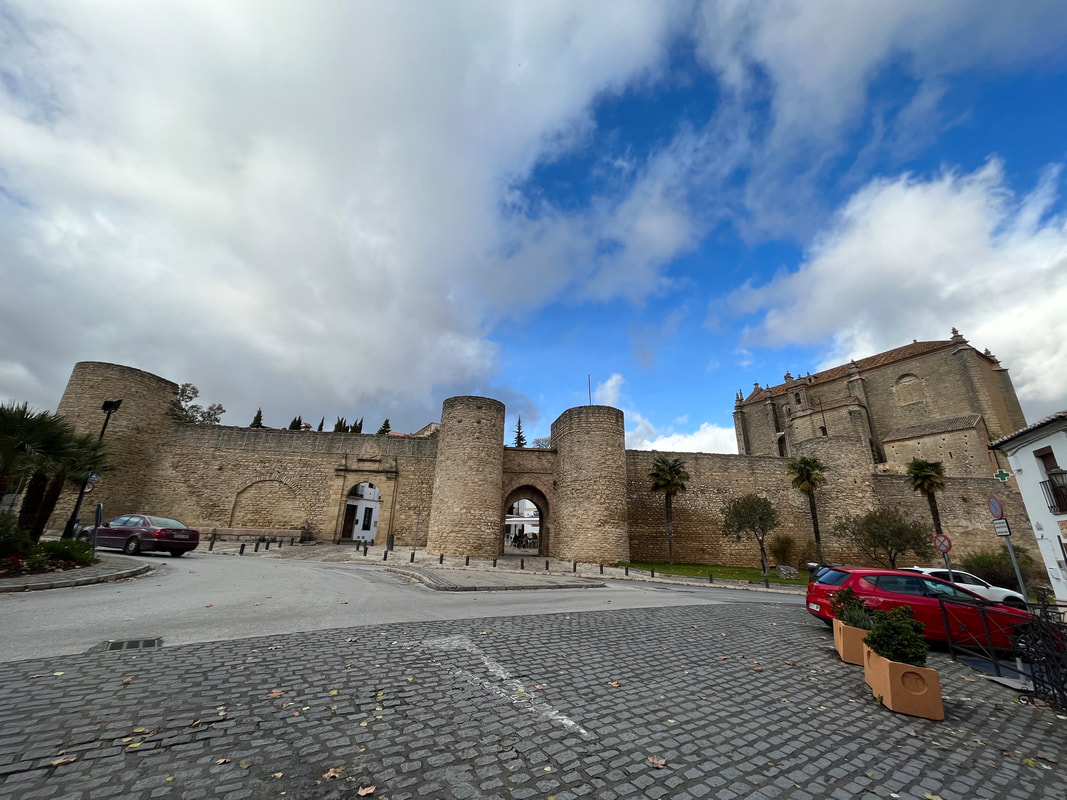