I decided to go for a stroll and take a look at this Mediterranean sea that I had heard so much about. I walked back down the same road I had come by from the bus stop - and boy was it so much easier without having to lug 22 kilos of luggage on me !  Soon I was on the marina and admiring a beautiful sunset over the Med!
​What a magical sunset! It was almost dark now, the sun had set - the sky was fading to a dark blue -  and there was just a band of orange light that lingered over the horizon. The evening star had just become visible in the dark purple-blue of the twilight sky and hundreds and thousands of sea birds swarmed over the sea, probably feeding on a giant school of fish which was passing by. 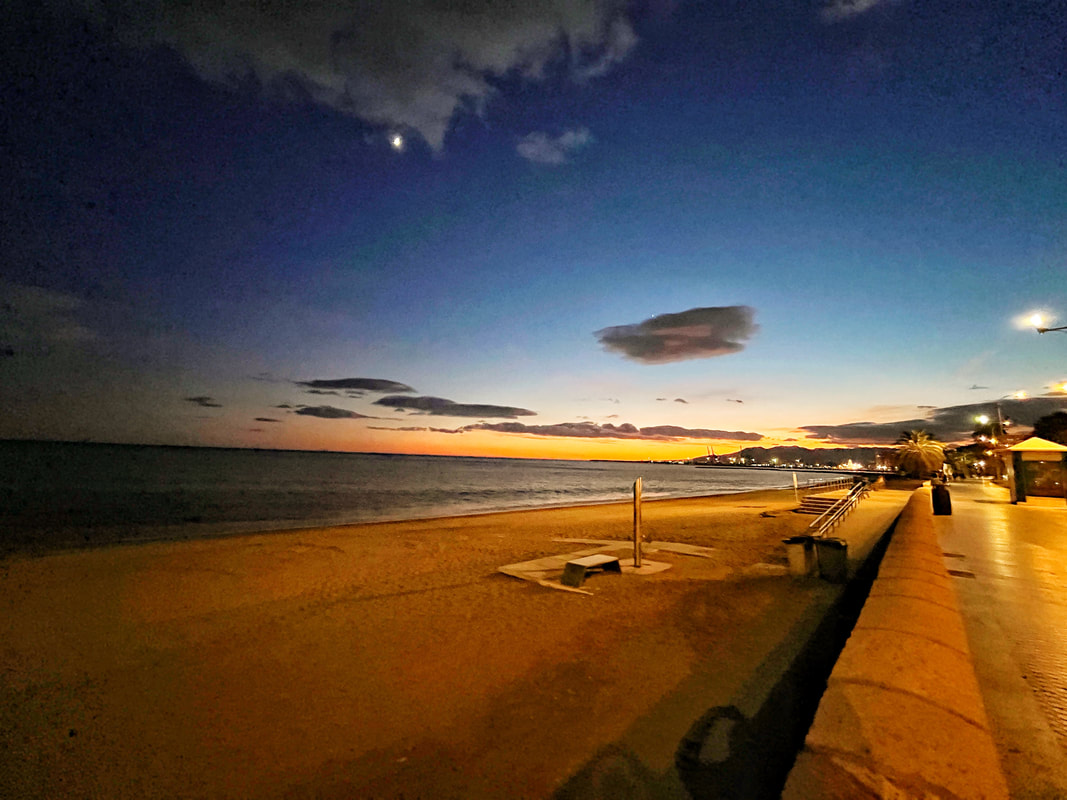 There was hardly anyone else around - the beach was totally deserted due to strict Covid rules and there were only a handful of people walking on the marina. The spectacular technicolour sky, the sound of the waves, the evening sea breeze, the whooshing sounds of the cars passing by… it was magical …hypnotic…surreal…
​
Sunset and evening star,
And one clear call for me!
Twilight and evening bell
​      And after that the dark! 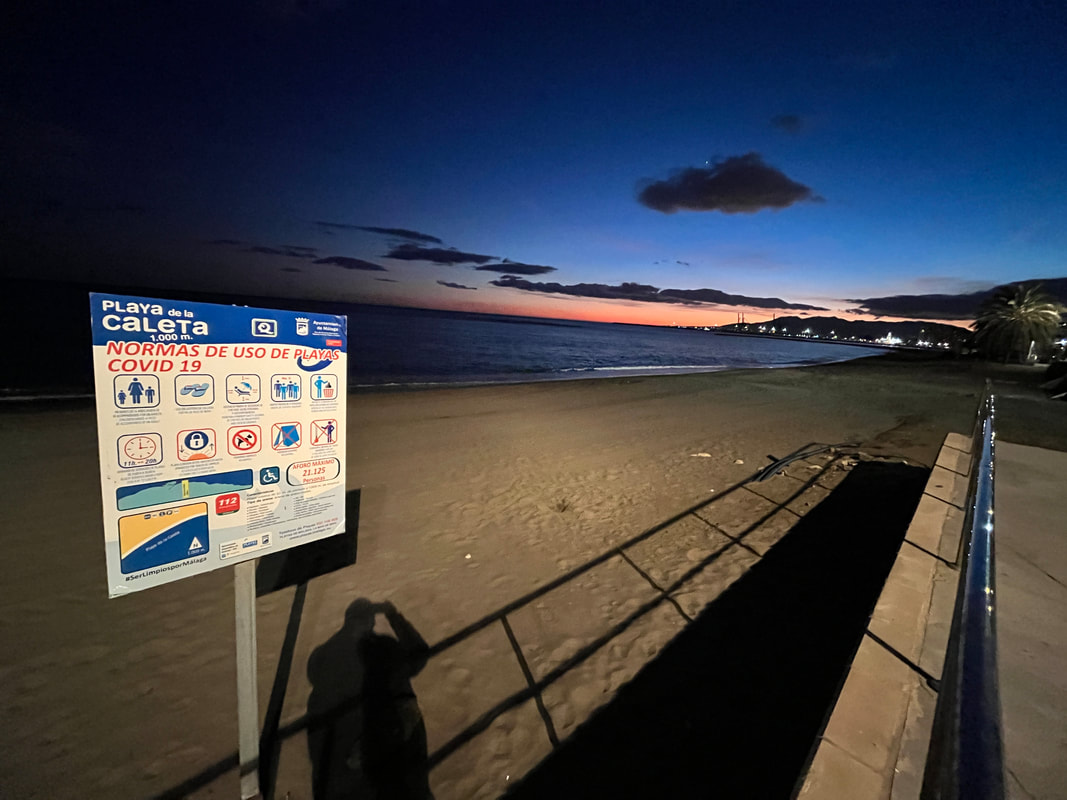 At the end of the marina, I came to the Malaga port area, and came to a lovely old lighthouse called ‘La Farola de Malaga’ - it is a symbol of the city and gives its name to the promenade where it is located. It was built in 1817 and was a functioning lighthouse till the 19th century, and has been lovingly restored and maintained. 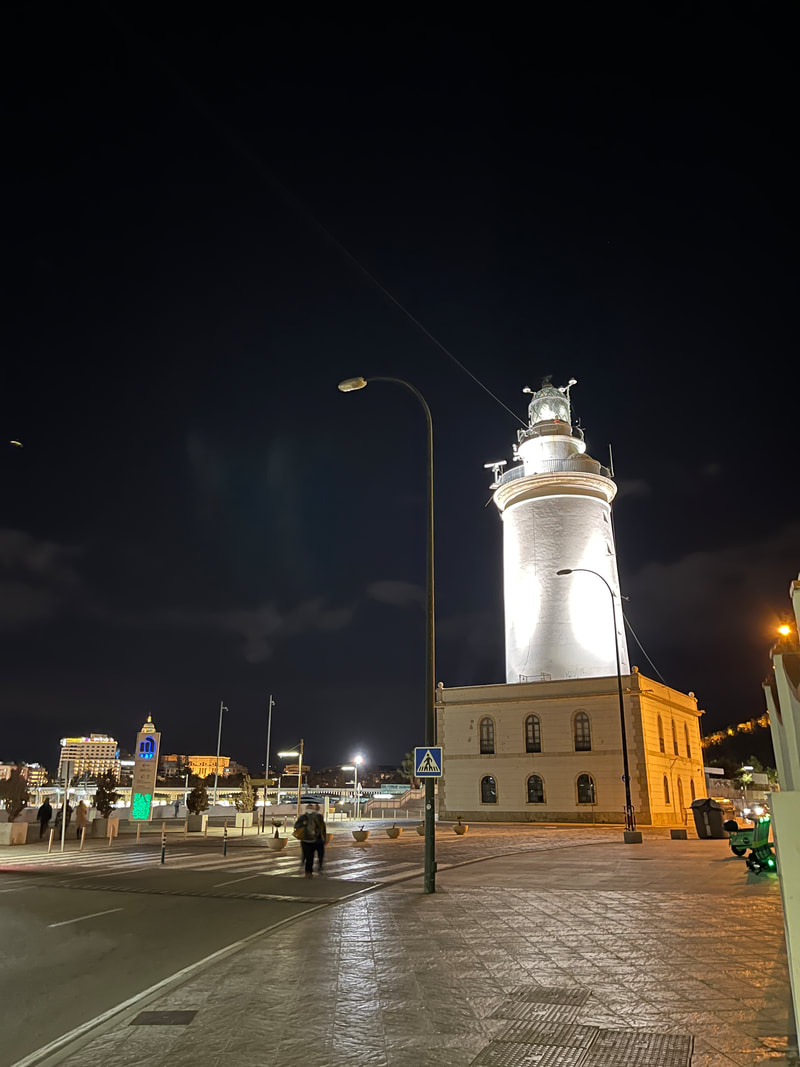 My eye had been caught by a giant christmas tree and the gay lighting of the ‘Paseo del Parque’ (the park road) and I went to check them out and found myself in the main ‘Mercato’ area of Malaga. 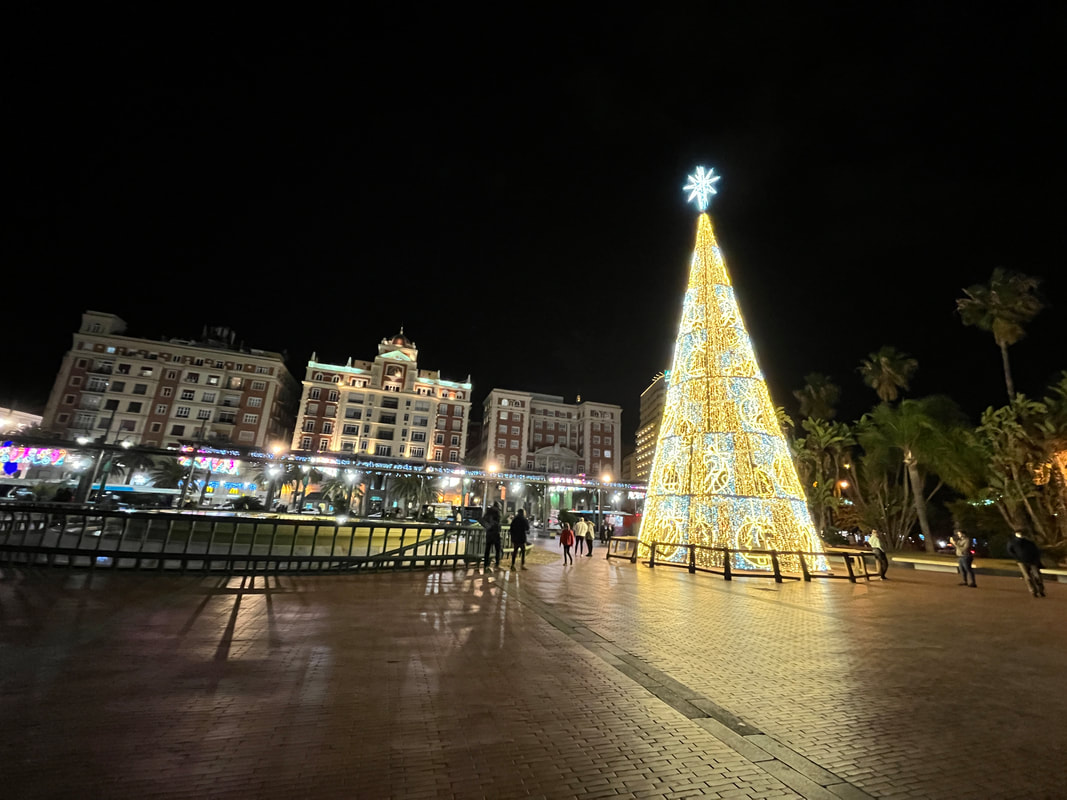 The market area was lit up with a massive amount of festive lighting, and there was a huge of crowd of people who seemed to waiting expectantly. Suddenly there was a wave of music and the lights started flashing to the music and I realised that it was this that they had been waiting for! A sound and light show! WOOHOO! 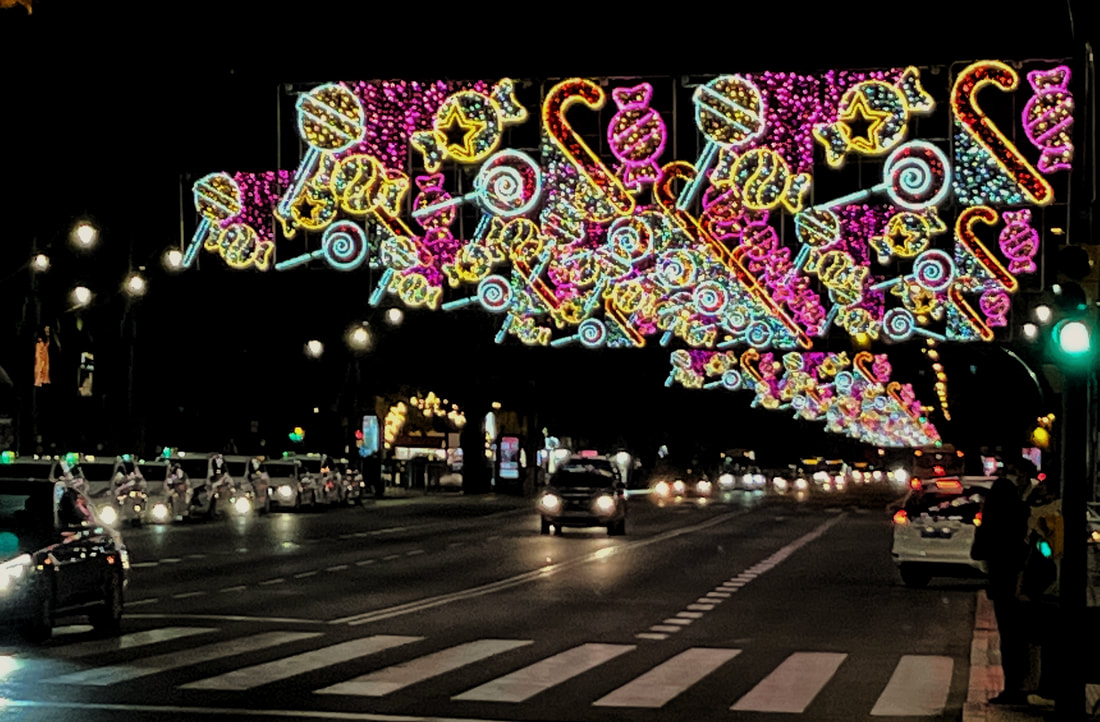 And what humongous crowds! I was totally taken aback! It seemed that there was no trace of Covid fear left anywhere. Sure, some people were wearing masks - but most weren’t! People were out to party! PAAAAARTY! OLÉ! ARRIBA! 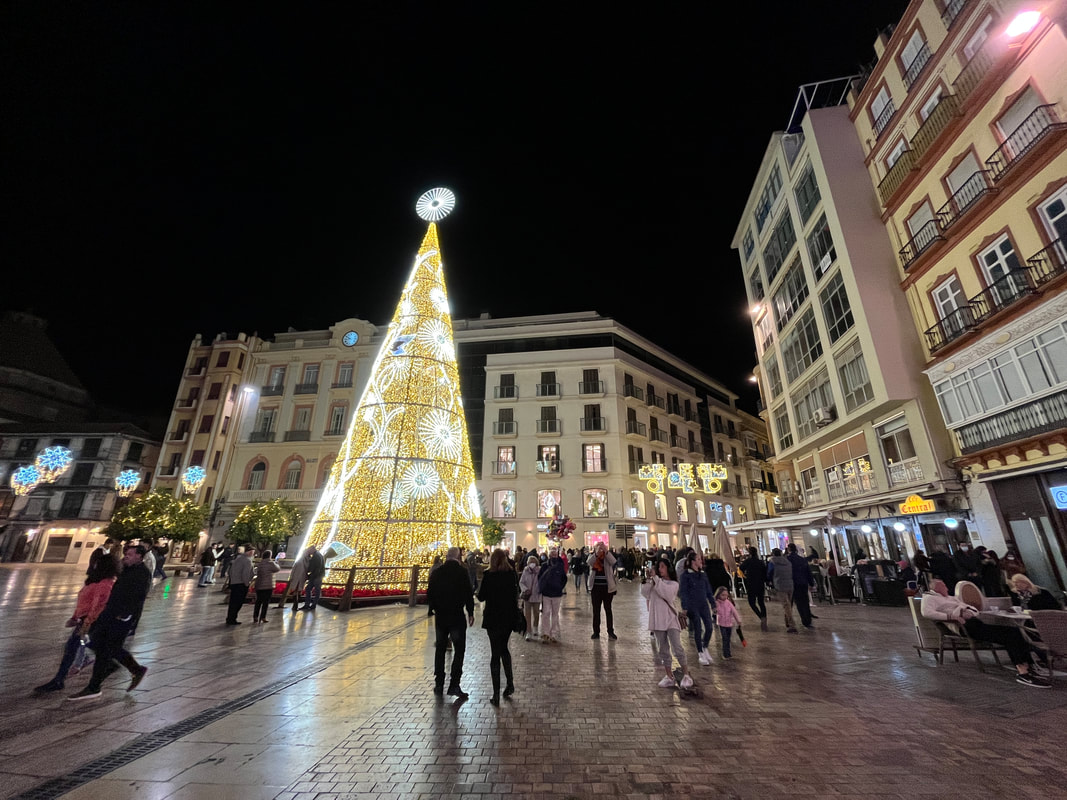 I didn’t feel like eating in a crowded restaurant - street food sounded like a much better option. I found a stall selling baked potatoes with awesome toppings and sighed with contentment as I ate that piping hot starchy goodness. My word - so many toppings - beetroot, olives, chicken, sour cream, sweet corn and god knows what else. Ah! Bliss!
God bless the Colombian exchange for bringing this noble spud from the new world to the old!
This baked potato was a noble amalgam of old world and new world goodness! The potato and the sweet corn came from South America, the beetroot from the middle-east, the olives from the Levant, the sour cream from eastern Europe, the seller from the middle-east, and the eater from India!
​And the Coca Cola I drank with it was American - with sugar from India and the West Indies,  and was originally made in the 1880s with Coca leaves from South America and Kola nuts from Africa! (Though of course, now it contains neither Coca nor Kola! Everything has been replaced by artificial flavourings.) 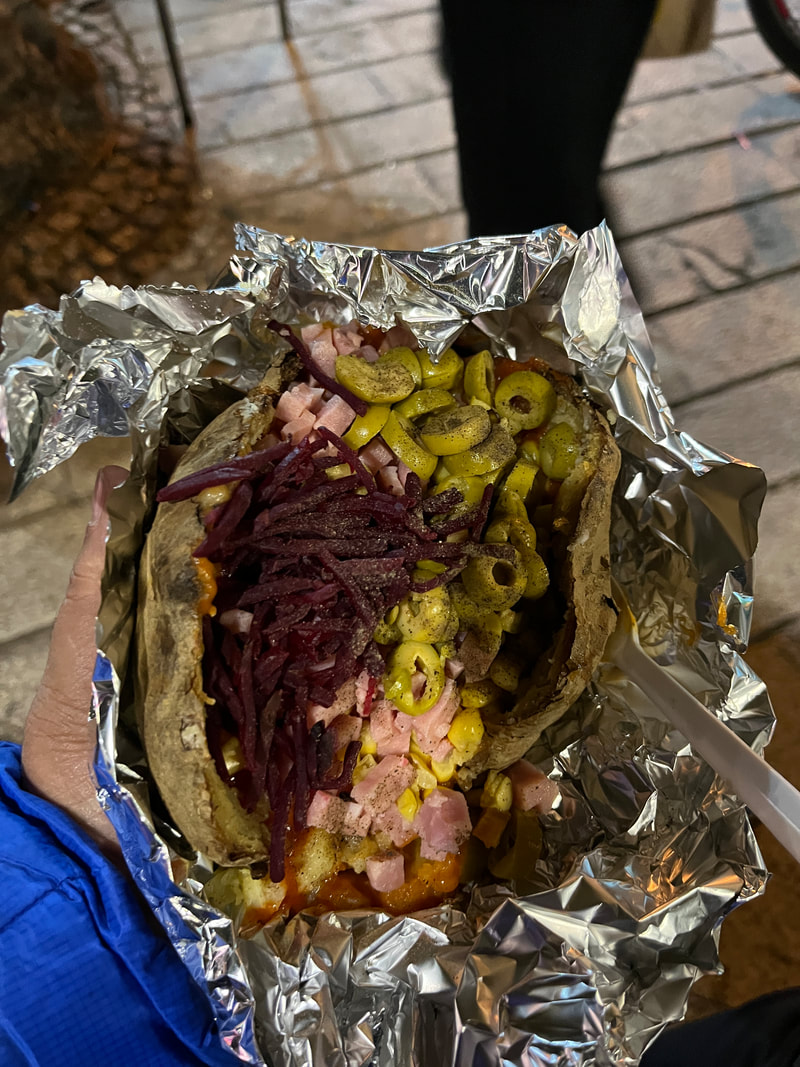 I woke up to wonderful views the next morning! Sunrise over the Med! 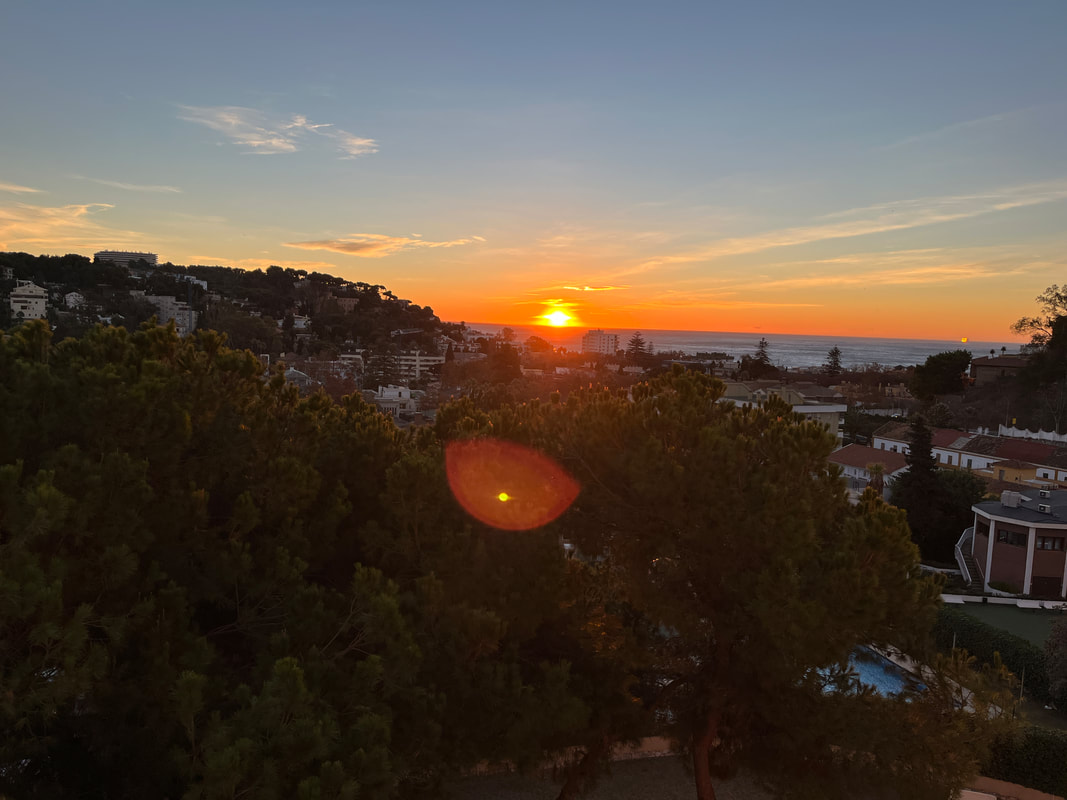 Mediterranean sunrise
Málaga's history spans almost  3000 years, making it one of the oldest cities in Europe and one of the oldest continuously inhabited cities in the world. It was originally founded by Phoenicians almost a thousand years before Christ was born!
Which is pretty damn cool, because Phoenicia was based in what is now known as Lebanon, and is at the other extreme end of the Mediterranean sea! They were a seafaring people who did a lot of trading with other kingdoms, including the ancient Greeks - in fact, nobody even knows their actual name today. The word ‘Phoenician’ comes from a name of a specific purple dye they used to sell. Think of them as the ‘Purple People’. It sounds so much cooler!
​But just imagine the amount of trade traffic they must have been running, to create a whole new city right at the other end of the Med!
Then over the centuries, it was taken over by Carthage, the Romans, the Visigoths, the Islamic empires, the crown of Castille and finally Castille merged into what is now known as Spain. 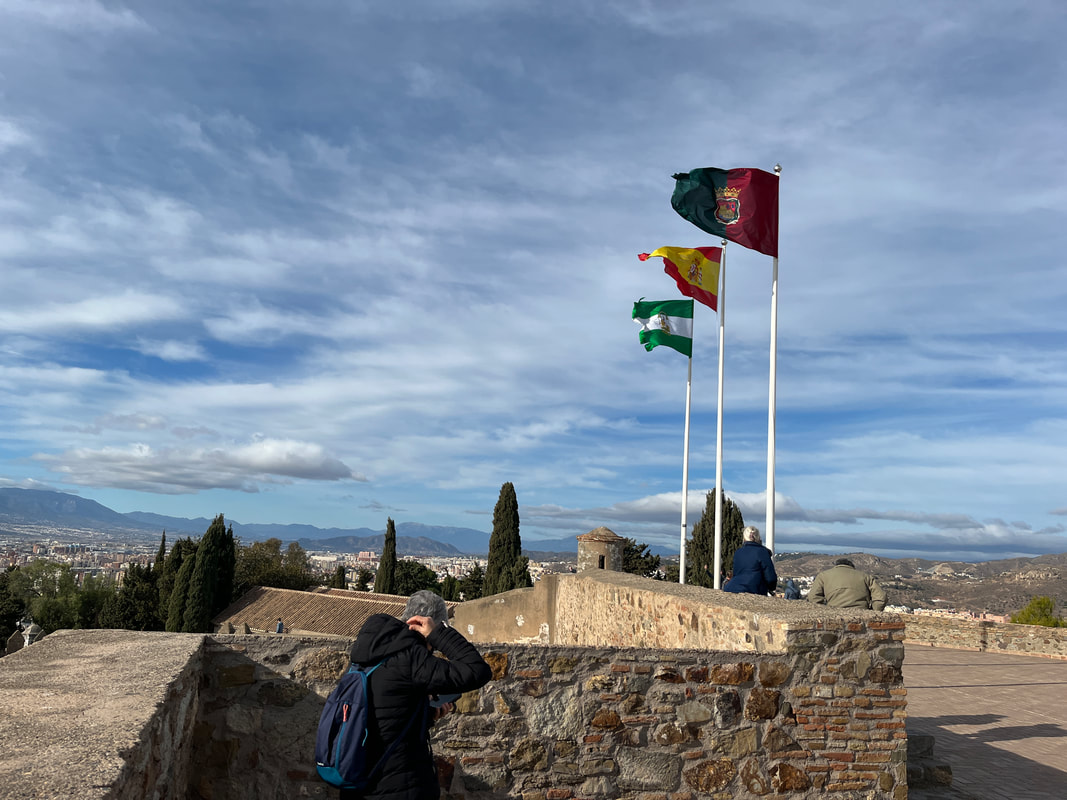 Gibralforo castle - built by Spaniards, occupied and expanded by the French
Thus you have remains of stuff built by all these guys - all of which is at the same place, on top of each other!
You have the remains of the first Phoenician settlement - The Romans built their huge roman theatre on top of that - then you have the Alcazaba fort-cum-palace which was built by the Muslim conquerors from Morocco, and  on the hill just above that you have the imposing Gilbraforo fortress which was built by the Spanish Christian kings - and then was used by Napoleon’s army when they conquered Spain! The castle overlooks the seaport - which was obviously at the heart of all the importance of Malaga since the beginning of its history - and has been fought over by any and every power that coveted the region. 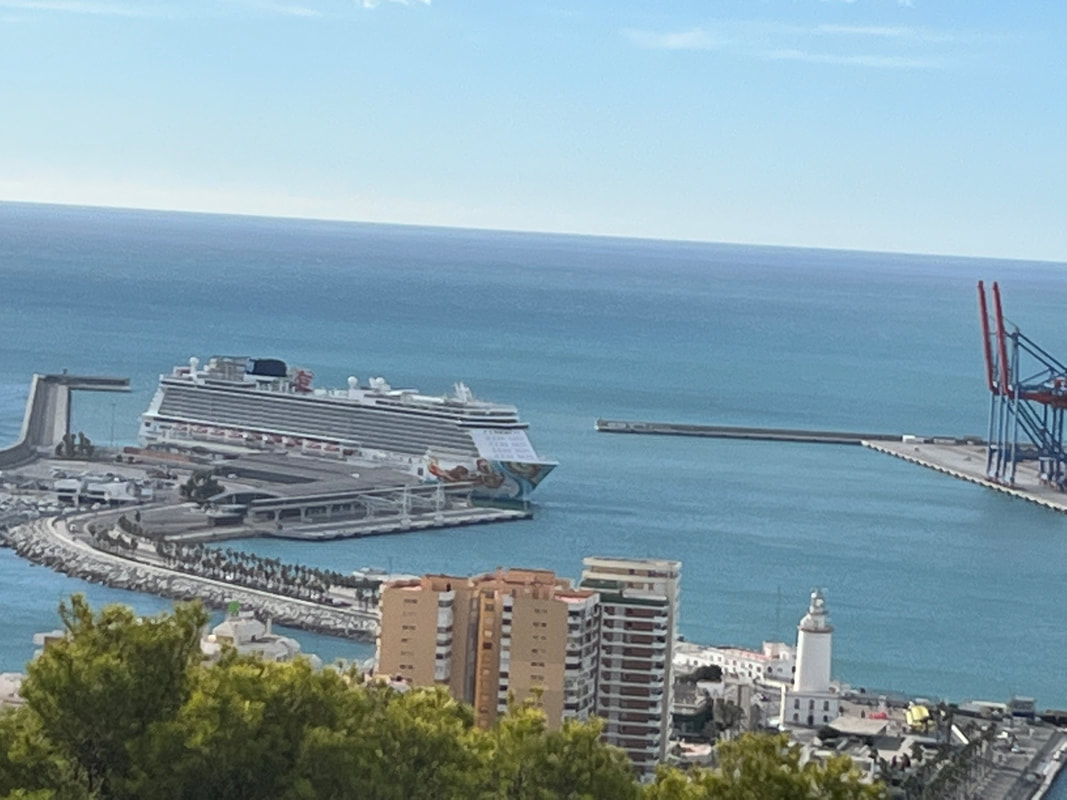 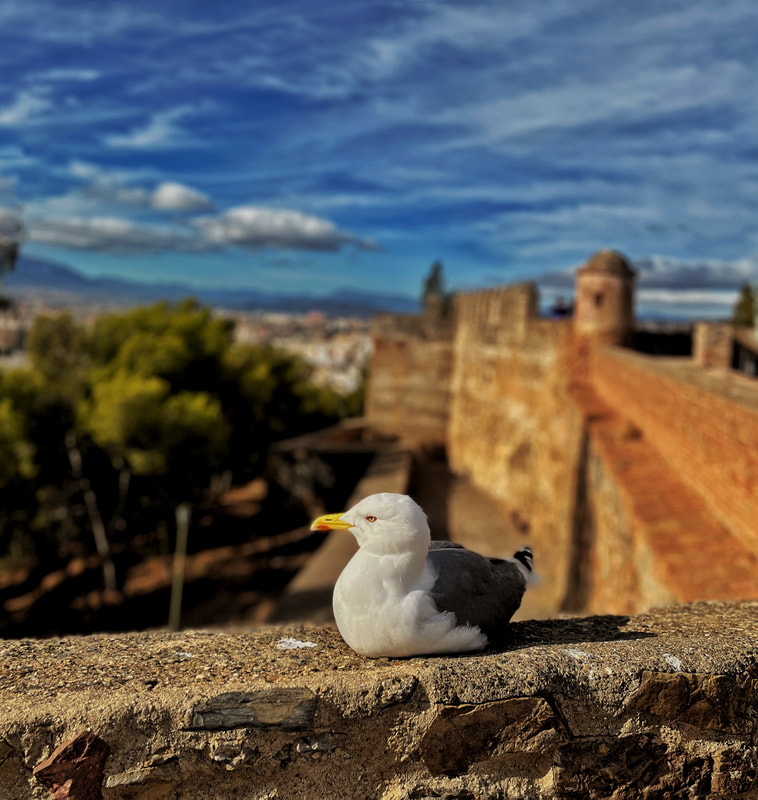 The Gibralforo is a nice fort right at the top of the hill, and was lovely place.  I enjoyed the balmy weather and awesome views from up there immensely - I could see the blue Mediterranean spread out in front of me, and the ships in the busy Malaga port and the beautiful Marina along the beach.
The town of Malaga was spread out below - and I could see the Alcazaba, the yellow circle of the old Bull ring,  the massive Malaga cathedral and the gardens in front of it … it was lovely. I went all around the fort and the little museum inside and then strolled down the hill to the Moorish Alcazaba palace below. 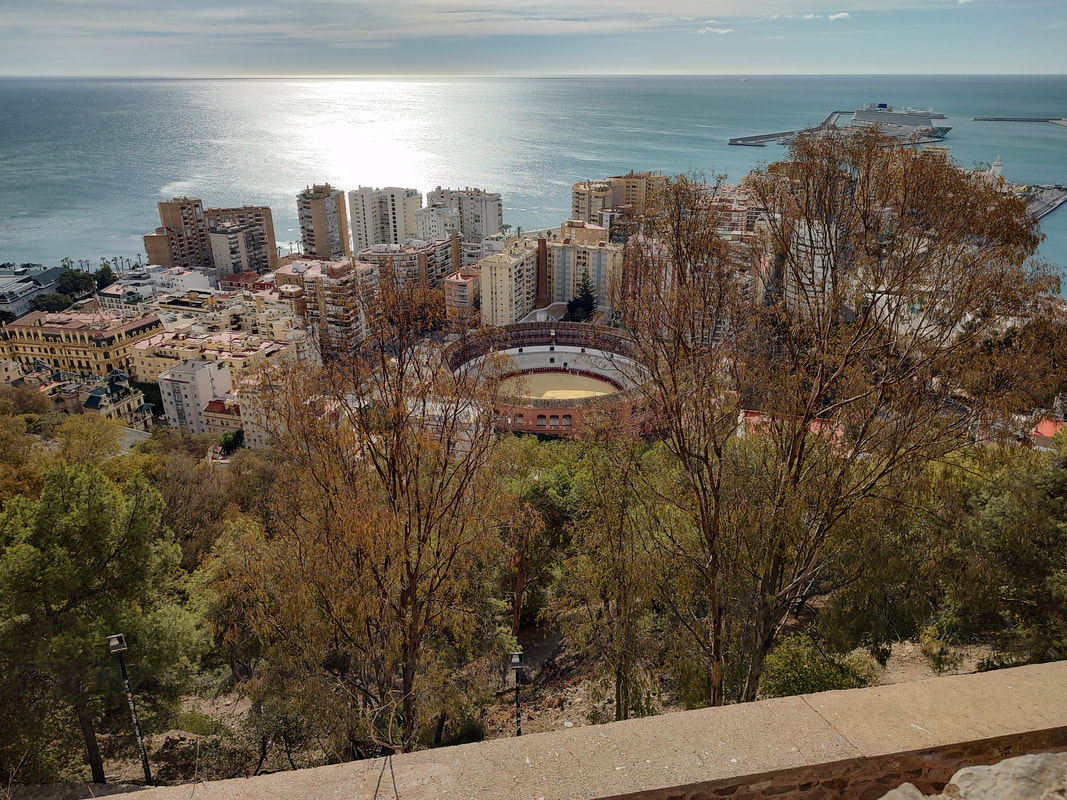 The Malaga bullring from above
​The Alcazaba was also a wonderful  ruin. This recalled the times of the Moorish occupation of Spain, when al-Andalus was the richest and most progressive state in Europe.  You had to see it with eye of history and imagination to really appreciate the awesomeness of the place. 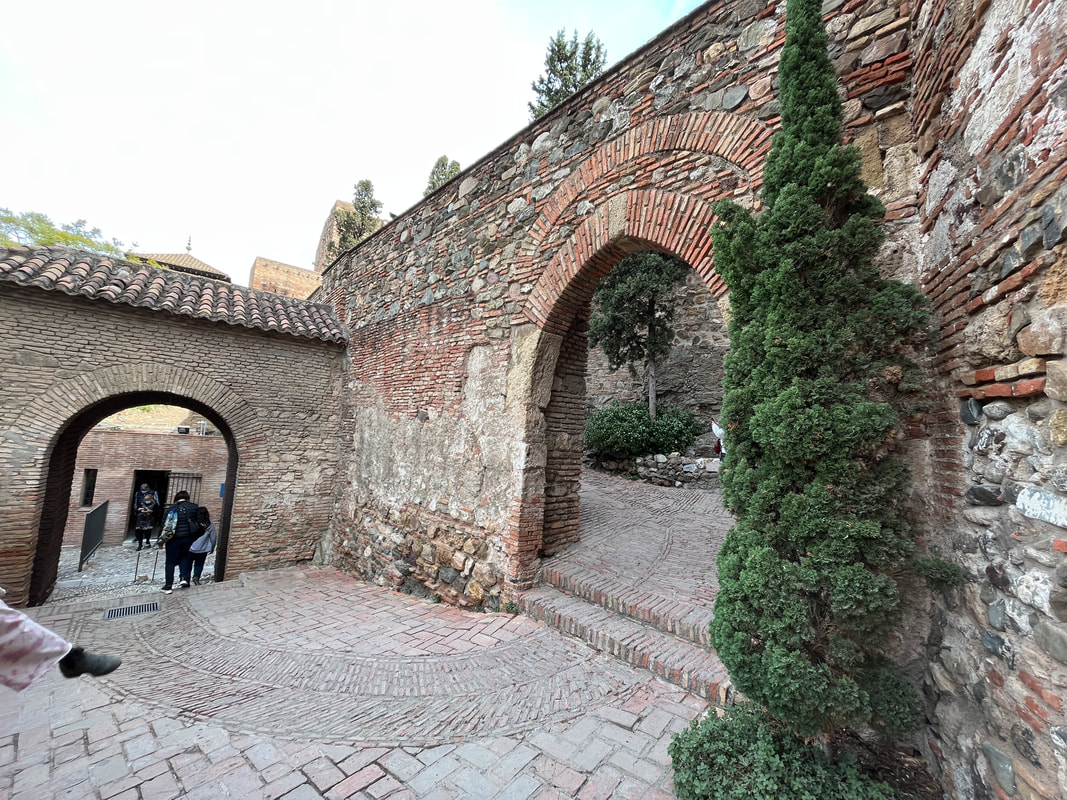 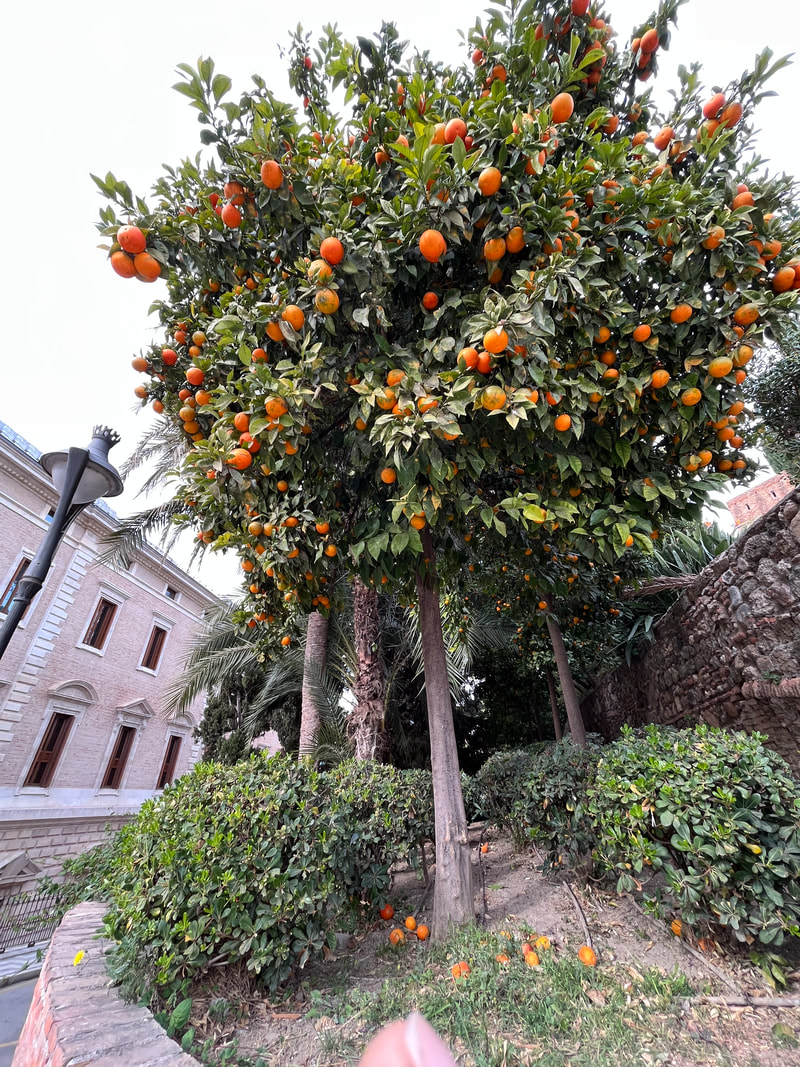 ‘We passed under the great gate at Malaga and wound through narrow streets. Above us towered the walls of houses, their high windows screened by alabaster. Often behind those screens I caught a suggestion of movement. These might be the Moorish beauties of whom I had heard.
We next passed through a bazaar where booths offered all manner of strange things for sale. Carpets from Isfahan, pearls from Basra, enameled leather from Cordoba, linens from Salamanca, silks from Granada, woolens from Segovia, the blades and armor from Seville or Toledo. Surely, there could not be in the world another city so crowded, so filled with the world’s goods!
- ‘The Walking Drum’, Louis L’Amour 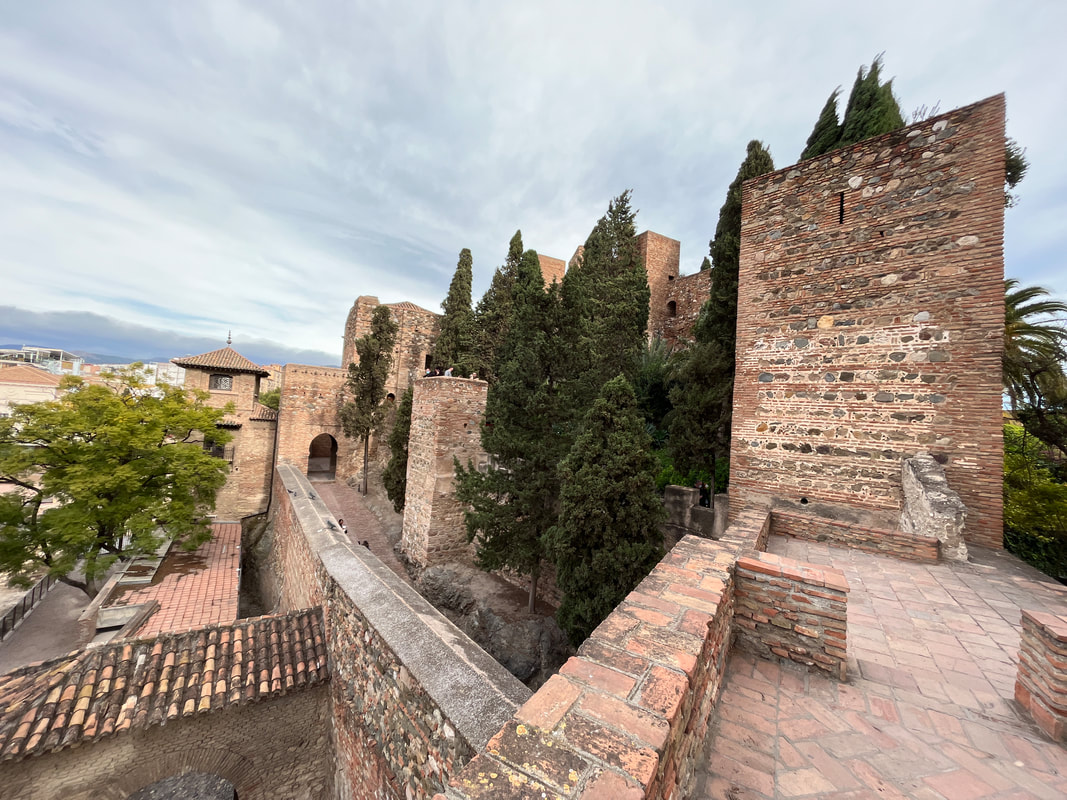 Below the Alcazaba was the excavated ruins of the ancient Roman theatre! It looked really nice  - the stage was at ground level and the bleachers rose up in semi-circular rows around it, as opposed to the high stage and low seats that we are used to today.  The information plaques said that this was probably a covered theatre back in the day, and the actors would enter from the wings to the right and left. It would be fun to see a re-staging of a Roman play here - the theatre and bleachers had been beautifully restored. 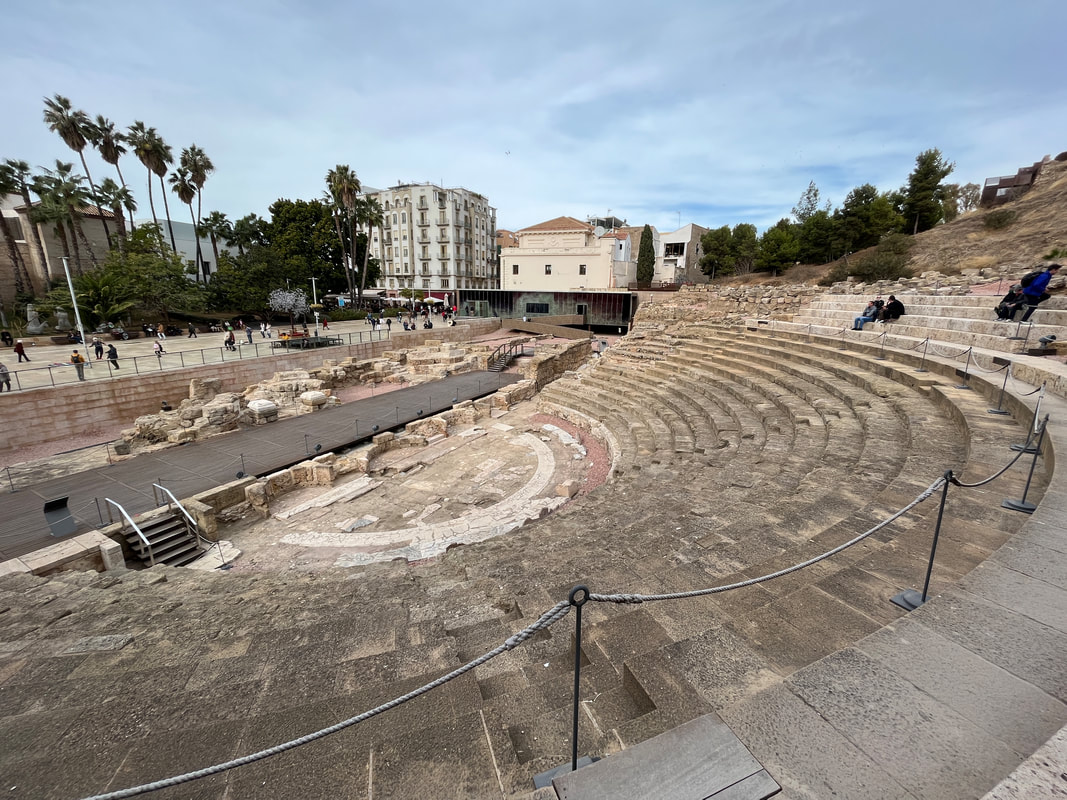 The Roman theatre - built on top of an ancient Phoenician settlement
The flatland below the castle is where all the civilian and cultural action was - and even is today! The Picasso museum is actually built right on top of the original historical Phoenician settlement! The remains of the Phoenicians are actually in the cellars of the Museo Picasso.
The Roman theatre is right next door, and cheek by jowl with that is the huge and imposing Cathedral of Malaga, which was built in the 16th century. The area around is covered with museums and art galleries and ancient squares and marketplaces and what have you. 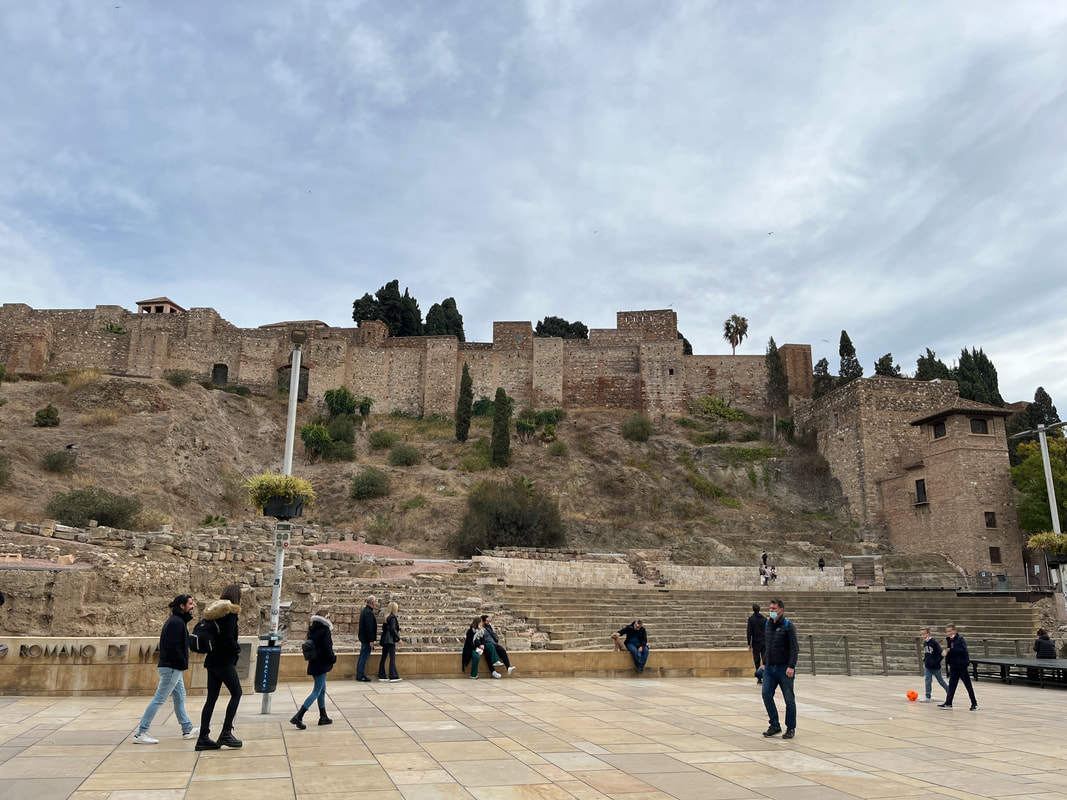 The Spanish Gibralforo, the Moorish alcazar and the Roman theatre - all in one frame!
It is quite amazing to think that curly-bearded merchants from Tyre and Babylon, toga-clad Roman citizens , robe-clad Moors and wig-wearing Spanish gentry - and Me - have all been roaming around the same place and looking at the same sights…just at different points in time! 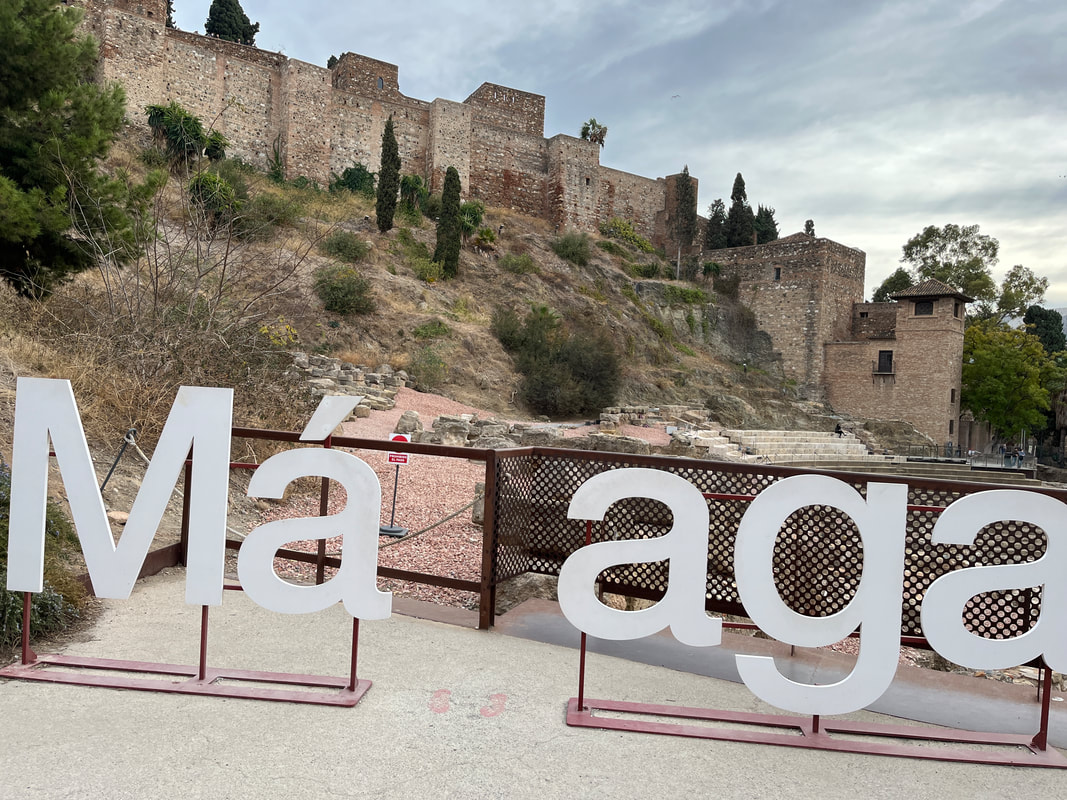 Coming to more modern times - Malaga is the birthplace of the famous artist Pablo Picasso, who was born here in 1881.
The city of Malaga wanted to have a Picasso museum in the birthplace of Picasso.  Christine Ruiz-Picasso, widow of the artist's eldest son Paulo Ruiz-Picasso, worked with Málaga to help put on the exhibitions Picasso Clásico ("Classic Picasso") in 1992 and Picasso, primera mirada, ("Picasso, the first glimpse") in 1994. This led in 1996 to rekindling the idea of a major Picasso museum in Málaga. Christine very kindly donated 14 paintings, 9 sculptures and some more stuff and her son, Picasso's grandson, Bernard Ruiz-Picasso donated another 5 paintings and some more material. The museum opened 17 October 2003, with the king and queen of Spain in attendance! 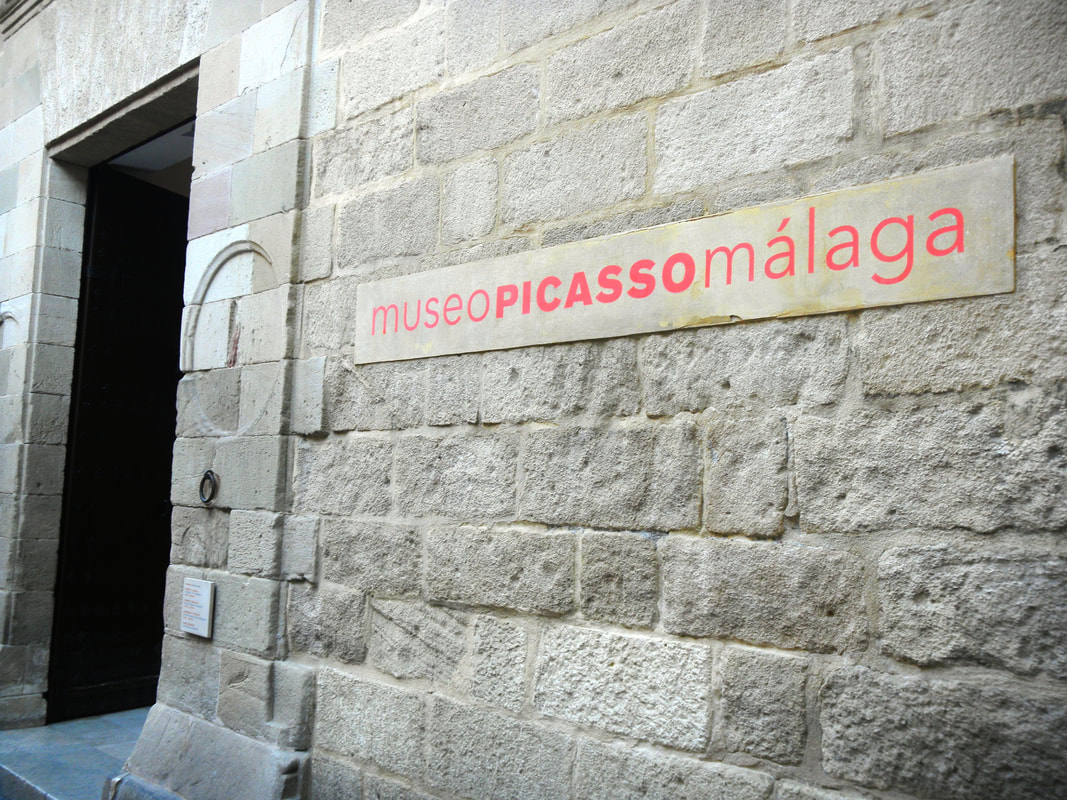 Malaga is Picasso's birthplace
I really tried to get into the art - I really did. I understood what Picasso was trying to do - he was bored by drawing the same old thing. Photography had come of age during his lifetime, and any old snapper could capture reality. But an artist sees what is not reality -  and he wanted to show what a really creative representation of the thing could like.
​
‘Painting is a blind man's profession. He paints not what he sees, but what he feels, what he tells himself about what he has seen.’
-  Pablo Picasso 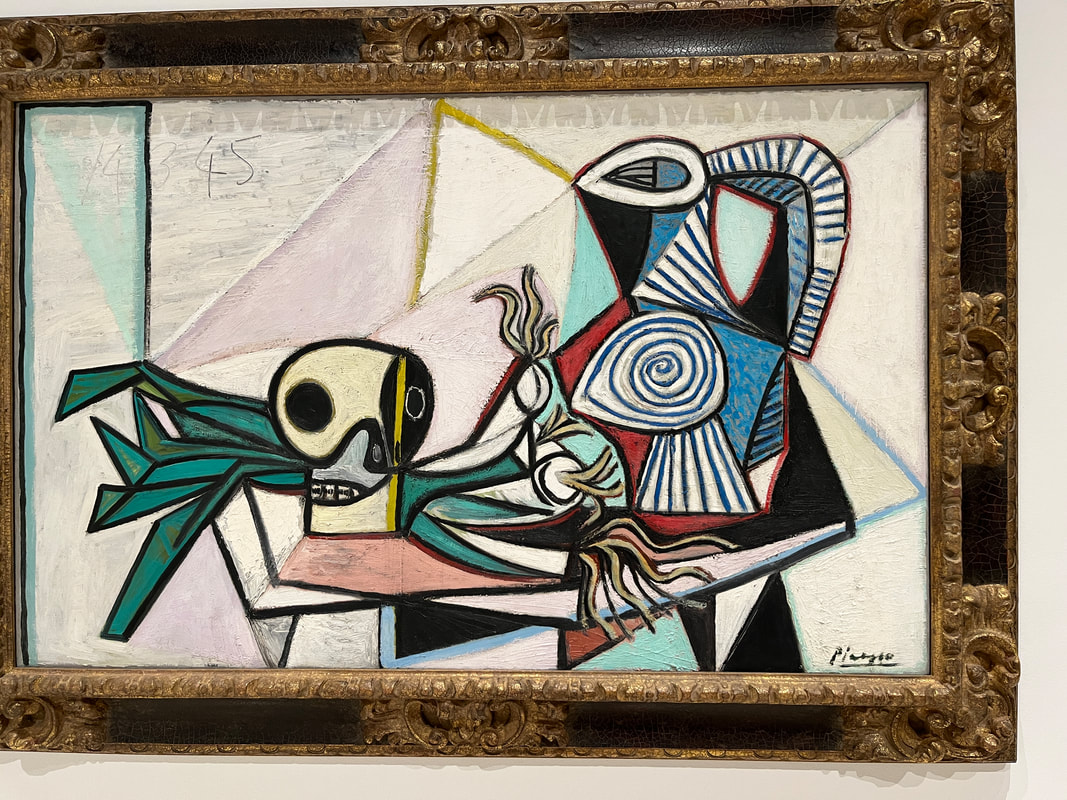 I mean…I get it. I get the idea. What is the point of doing what a whole bunch of people have already done? Do something unique.
​
‘I paint objects as I think them, not as I see them.’
- Pablo Picasso 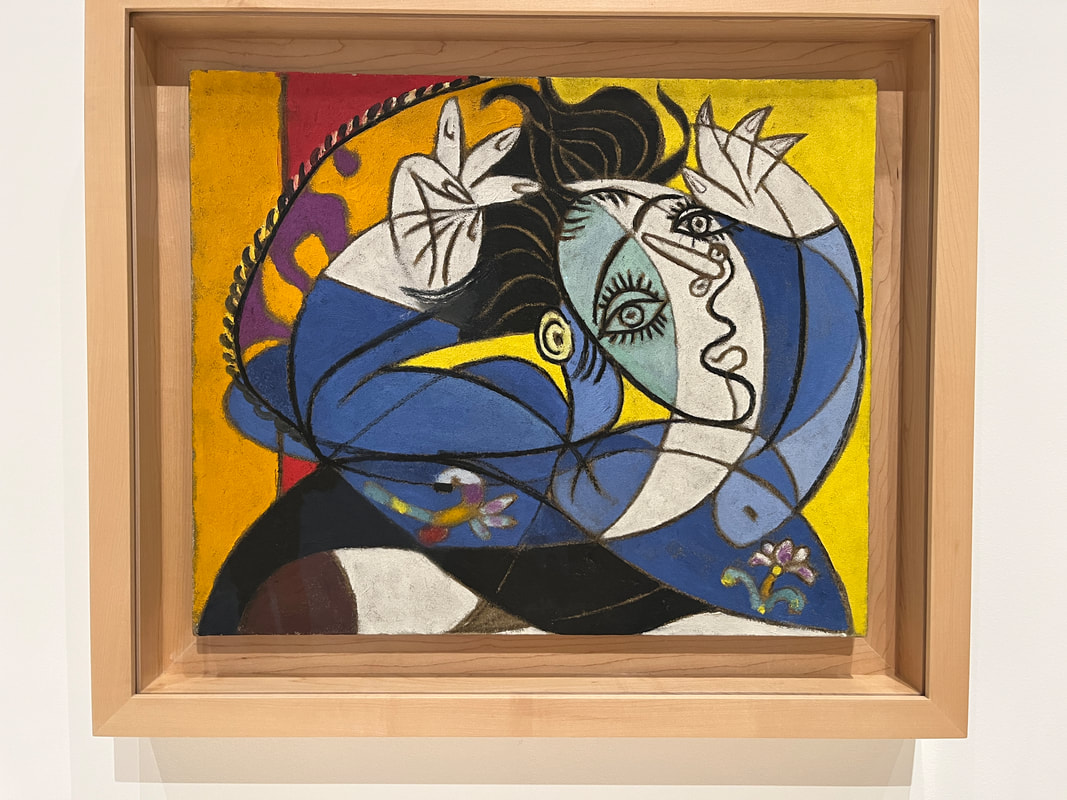 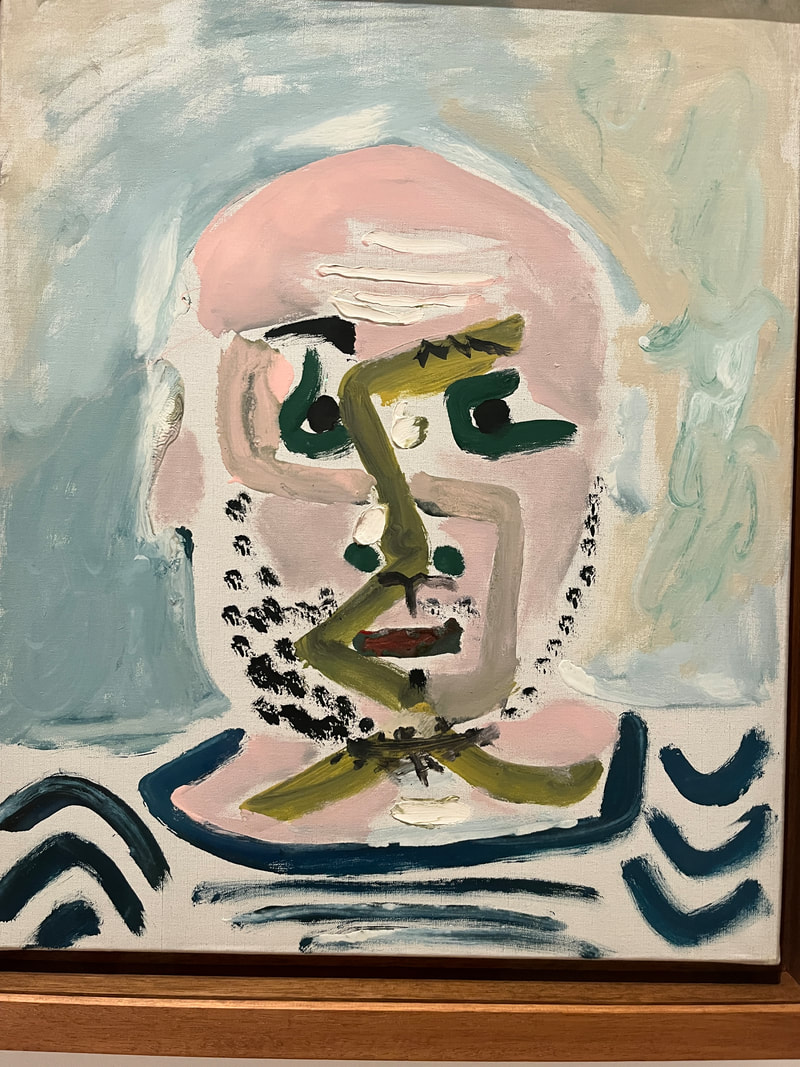 I wonder is Picasso is laughing at all of us 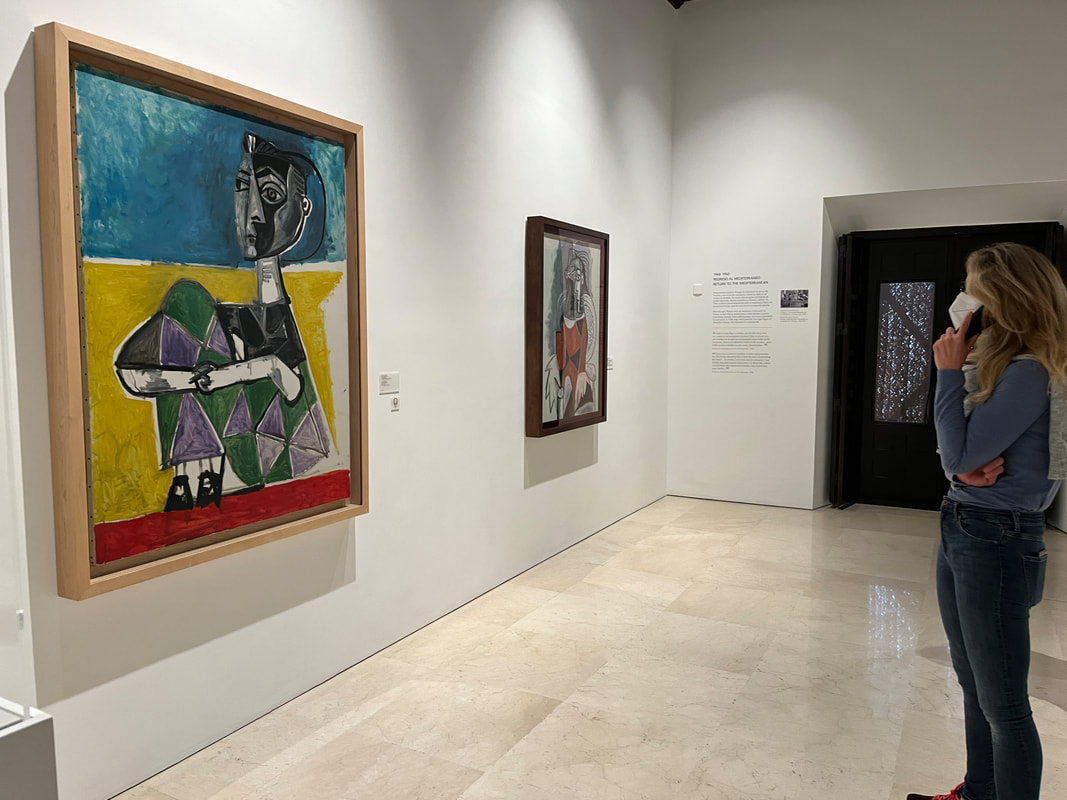 But towards the end of the museum I  felt that Picasso was just having fun and seeing just how much he could get away with. By the end of his career, he was just throwing paint willy-nilly on the canvas, and people were oohing and aahing about it. I could just imagine him hiding in a corner and giggling away as he saw all the people looking earnestly at the paintings.
​
‘The world today doesn't make sense, so why should I paint pictures that do?’
- Pablo Picasso
Ronda
toledo
one man goes to spain