WHAT ARE VIDEO BOOKS?

Some people told me that they are not into reading books - but they enjoyed hearing the ride stories!
One has heard of 'Audiobooks' - but then you couldn't see the photos and videos of the ride. So I decided to start something new - a 'video book'! I would read out the book - and intersperse with photos and videos so the viewer would get a better and more literal experience of the places and stories which I was talking about. 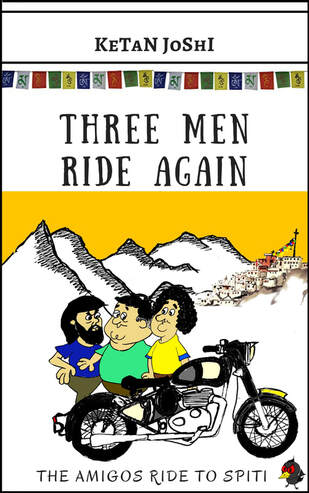 Episode 1 - Prologue - The shock! ​
Ketan and Delzad go for a ride to Rajasthan. They are enjoying the ride - but suddenly they have a shocking encounter!
Episode 2 - Overture - The Accident! ​
Delzad has an accident - in the desert - in the middle of nowhere - and breaks his knee! What will happen now?
Episode 3 - Chapter 1 - The recover
Delzad is slowly recovering - but Adi is going insane! HE WANTS TO RIDE!
Episode 4 - Chapter 2 - Spiti it is!
​
SHE WHO MUST BE OBEYED gets sick of their farting around and orders them to go on a ride - to Spiti!
Episode 5 - Chapter 2 - The Ride Begins
​
​The Amigos land in Chandigarh - but their bikes are missing! Now what?
Episode 6 - Chapter 3 - Homeless in Simla
​
Historical palaces, wet and rainy forested roads...and homeless in Simla!
​​EPISODE 7 - SIMLA TO SANGLA
The Amigos ride through the apple valleys of the Sutlej valley and the HINDUSTAN TIBET ROAD

Episode 8 - SANGLA TO KALPA
Ride with the Amigos along the beautiful Baspa river to India's last village - Chitkul - and then return to the Hindustan-Tibet road (Now known as NH 5)Hear the fascinating story about how the 'Great Game' between the Russian and British empires led to the creation of this road. See the amazing 'Half-tunnels' created by the Gorkha's of the Engineering regiment and learn about India's silk road.
​Ep 9 -TURNOFF TO TIBET - SPITI RIDE -The AMIGOS ride to the closest point to Tibet
THREE MEN ON MOTORCYCLES on the SPITI VALLEY RIDE  ride on the HINDUSTAN TIBET road and reach the confluence of the SPITI and SUTLEJ rivers at Khab - a place of amazing power!
We get motivated by SHE WHO MUST BE OBEYED, get invited for lunch by the BIHAR REGIMENT of the INDIAN ARMY and ride to the last point of the HINDUSTAN TIBET road. This is one of the most amazing places in India - a place of immense power!
​
EPISODE 10 - SPLENDOURS OF SPITI
cross the confluence of the Sutlej and the Spiti rivers and enter the Spiti valley plateau. We visit the amazing Himalayan oasis of Nako lake and see a magical meteor shower!
EPISODE 11 - EXPLORING SPITI - TABO, DHANKAR, KAZA
- The Amigos continue their merry way across Spiti valley. They explore the ancient Tabo monastery - the oldest continually inhabited Buddhist monastery in India, the ancient Dhankar gompa perched above the confluence of the Spiti and Pin rivers, the Pin valley and Kaza. Enjoy this fun-filled and hilarious ride of the AMIGOS.
Episode 12 - losar to manali
The most thrilling day of the ride - coming down the treacherous Kunzum la pass - no roads...only mud and rocks!
episode 13 - amigos in manali
​After crossing the fearsome Kunzum pass and Rohtang pass in one day, the Amigos decide on a day of R&R in Manali. A sudden whim to do a good deed gets them instant good karma. Check out the amazing story of the origin of Manali and the story of Hidimba temple!
episode 14 - kasol and manikaran
​The Amigos decide to set out from Manali and explore the nearby Parvati valley and shack up at the backpacking spot of Kasol, Himachal Pradesh. Get to know the amazing story of Manikaran hot springs -  and check out the Sikh gurdwara as well. Get to know the amazing history of Malana village - supposedly the home of the ancient Aryans!
Ep 15 - last day
Even the last day of the ride has its share of excitement!