My good hostess gave me a nice breakfast… but it was the same as yesterday! It must be the same everyday! Stay here for too long and you will go insane and start screaming as soon as you hear the word ‘Breakfast’! AAAAAAARRRRGHH! But since it was just the second day for me, I enjoyed it! 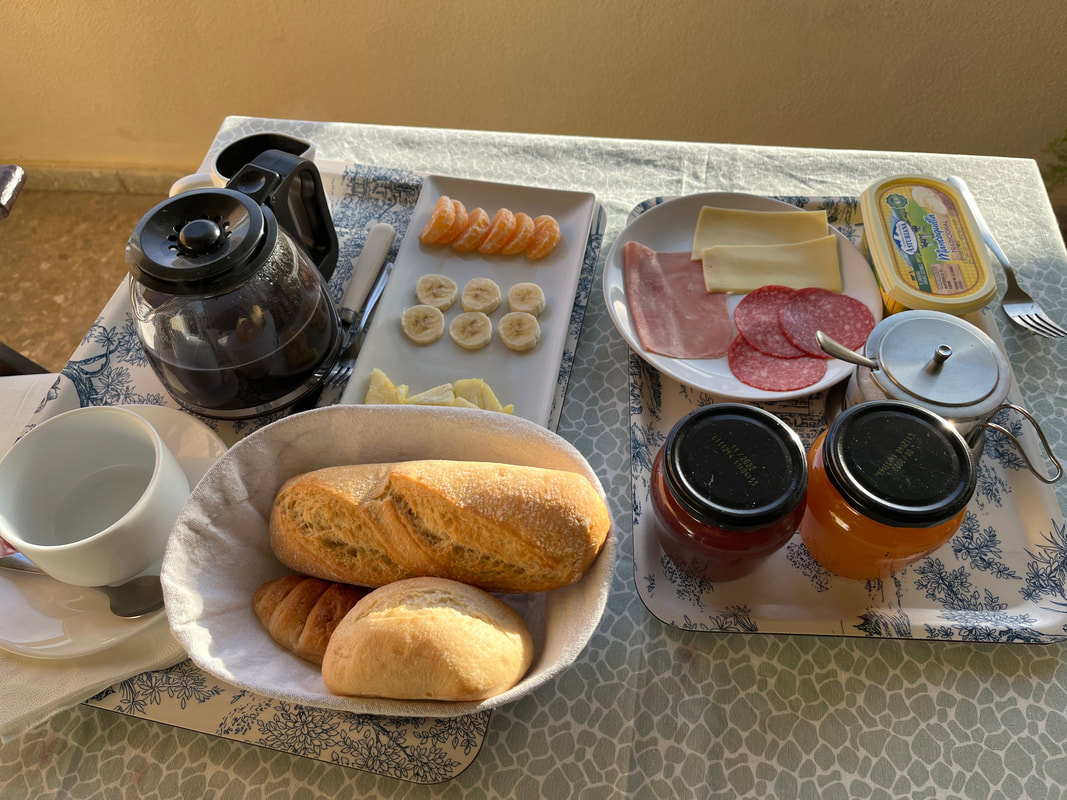 Soon I was all packed and ready and calling for an Uber to drop me to  the Maria Zambrano railway station.
I really liked the sound of the name - ‘Maria Zambrano’! It just sounded so impressive! And I was even more impressed to learn that this was not the name of some old and mouldy politician or royal queen - Maria Zambrano was a writer! 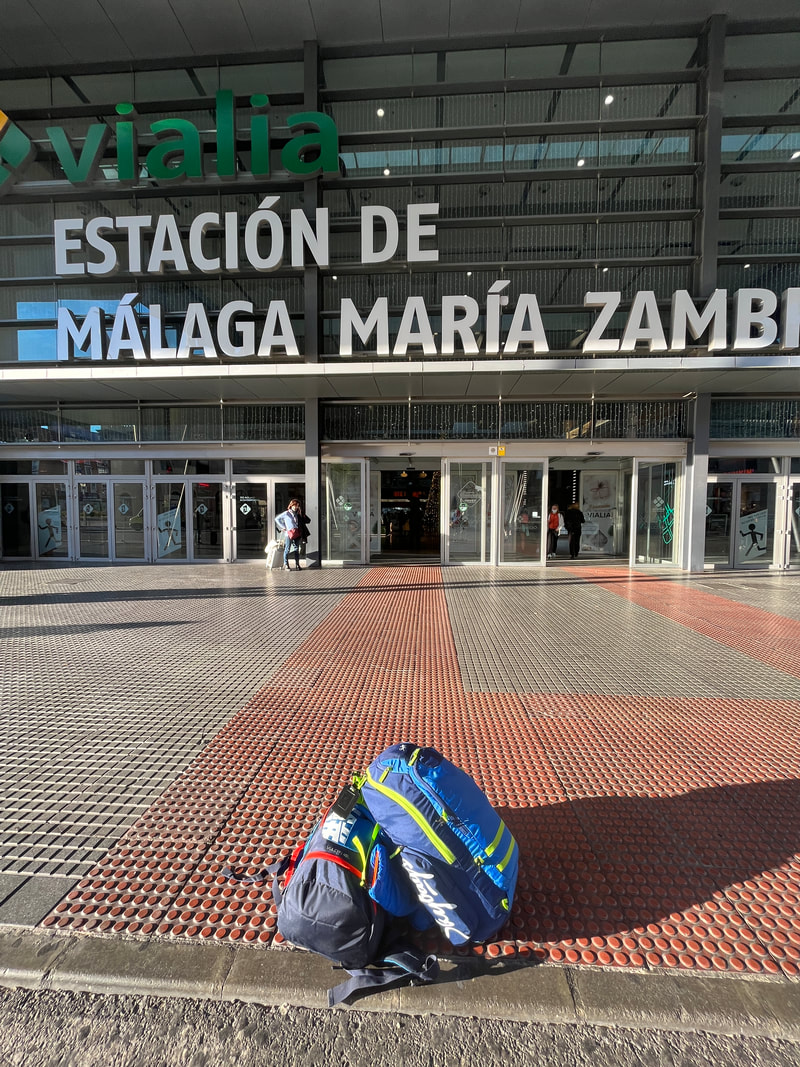 She was a Spanish essayist and philosopher, and was exiled by the dictator Franco for her political views! She was exiled from her homeland in 1939 and came back only in 1984 after the death of Franco! Imagine that - 45 years of exile and statelessness!
​
But she was honoured  after her return - She was the first woman writer to be awarded the Miguel de Cervantes Prize (the most prestigious award given for Spanish-language literature), and when the Madrid-Málaga high-speed rail line was opened in 2007, the Malaga railway station was  renamed after María Zambrano.

Isn’t that cool? I wish more public places would be named after writers and artistes rather than after politicians and kings. 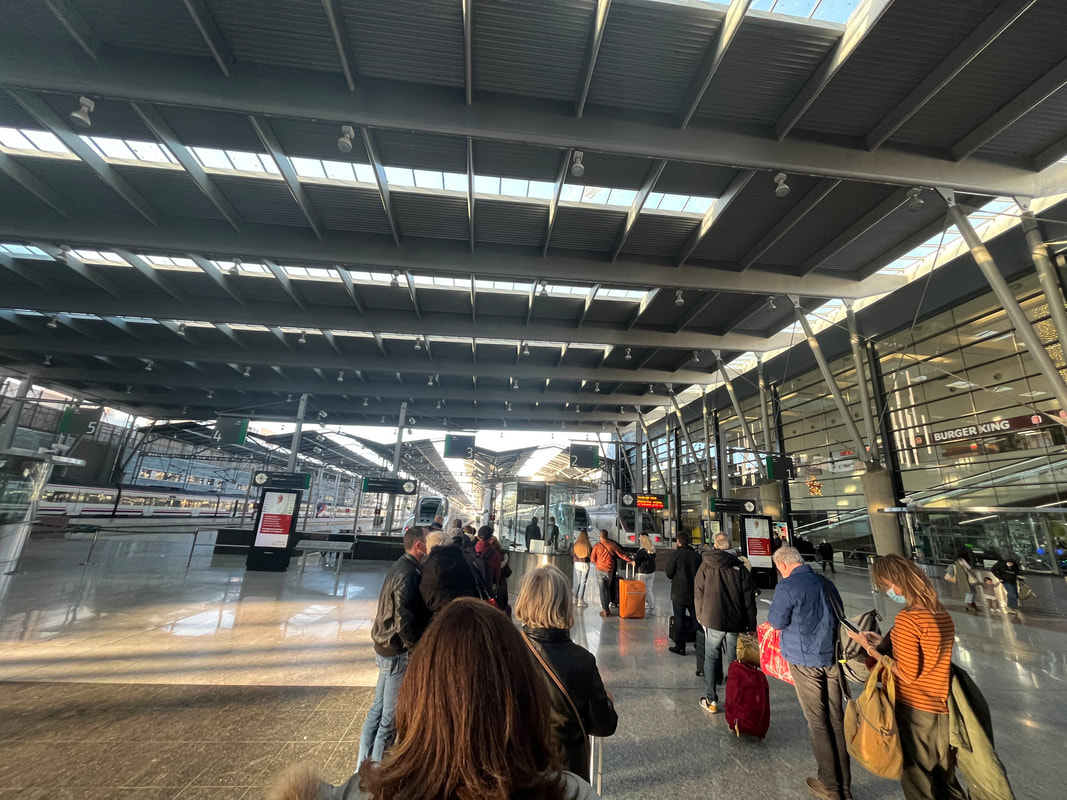 It was a pleasant train journey back to Madrid -  and Madrid to Toledo was just a few minutes by an awesome high-speed train. Spanish trains are amazing.
The Toledo station was very cute - being built to resemble a castle  in the  ‘neo-medjedar’ or ‘new muslim’ style with little turrets and stuff. In fact, the railway station has been declared a ‘Property of Cultural Interest’ and classified as a ‘monument’. 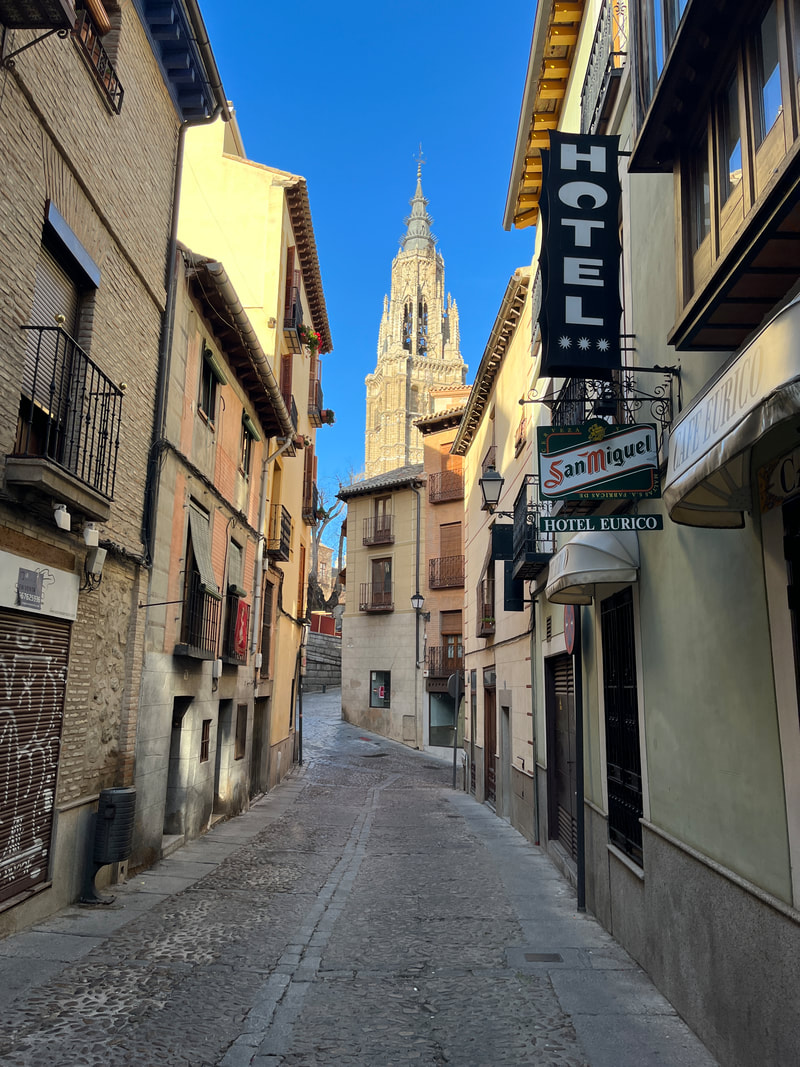 Toledo was the capital of Spain, before Madrid -  the ‘Imperial city’ - and was called the ‘City of the Three Cultures’  for the cultural influences of Christians, Muslims, and Jews reflected in its history. 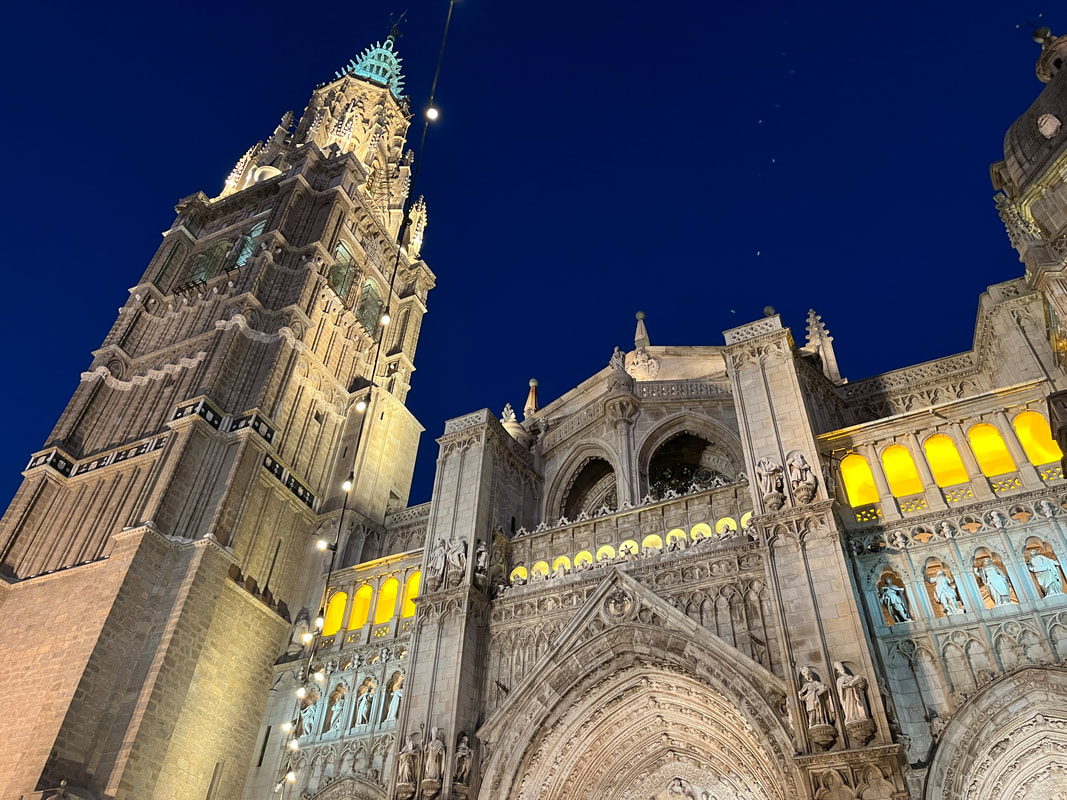 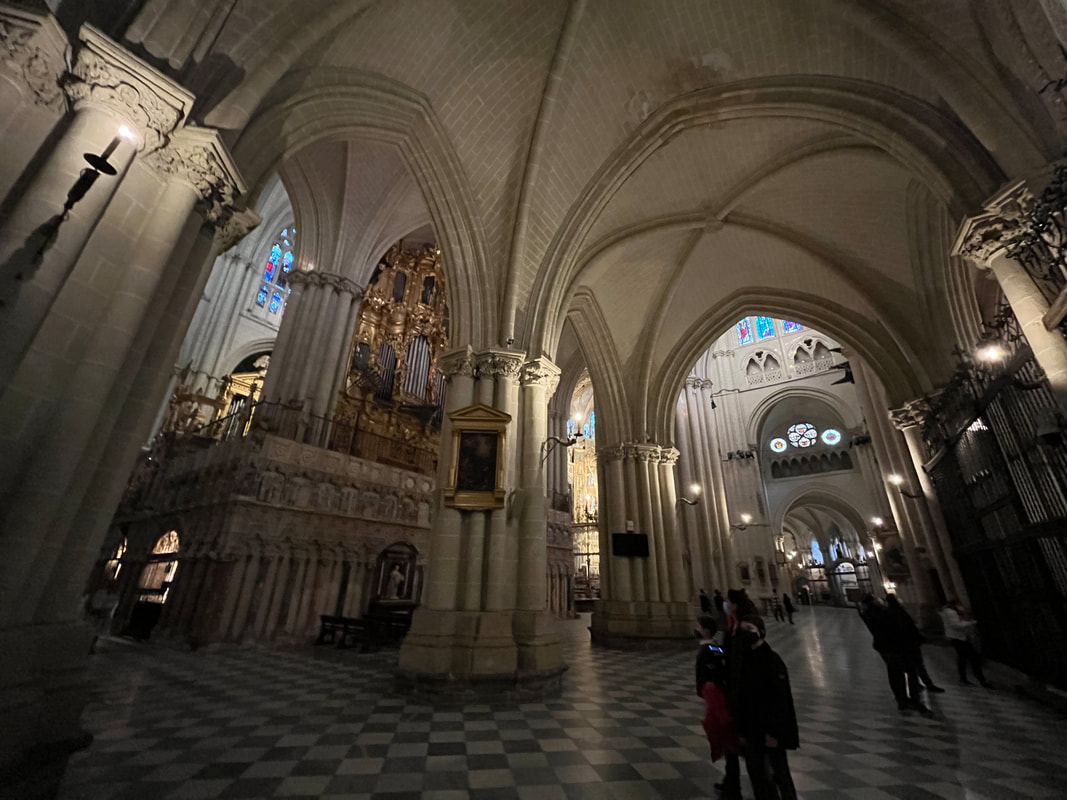 Apart from being an architectural masterpiece, it is also an awesome museum - not only does it have wonderful stone carvings, friezes, reliefs, statuary and what have you  - it also has amazing murals, ceiling paintings, stained glass, inlay-work and a number of invaluable paintings from the spanish masters like Goya, El Greco etc. 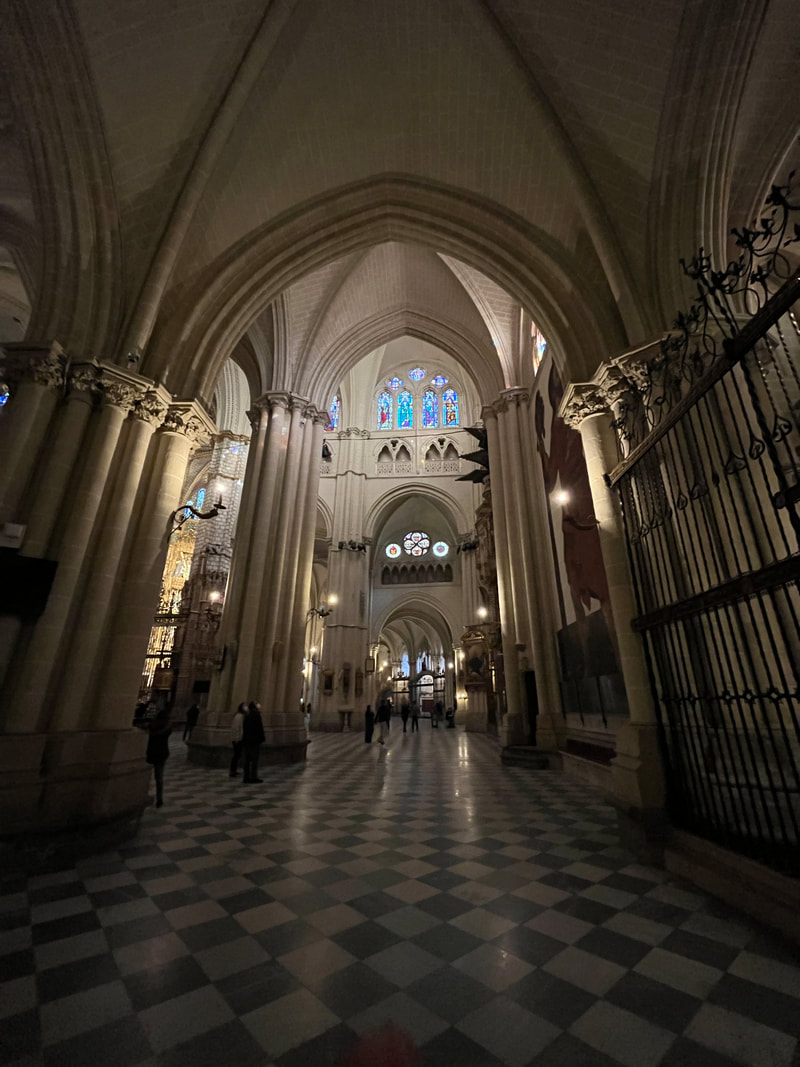 Remember all the stuff I mentioned about the majesty and wonder of Gothic cathedrals in the Avila chapter? Well, this is the absolute pinnacle of cathedral building glory!
There is nothing bigger or better or finer! It is awe-inspiring! Breathtaking! Spectacular!
The scale of the place is mindboggling! 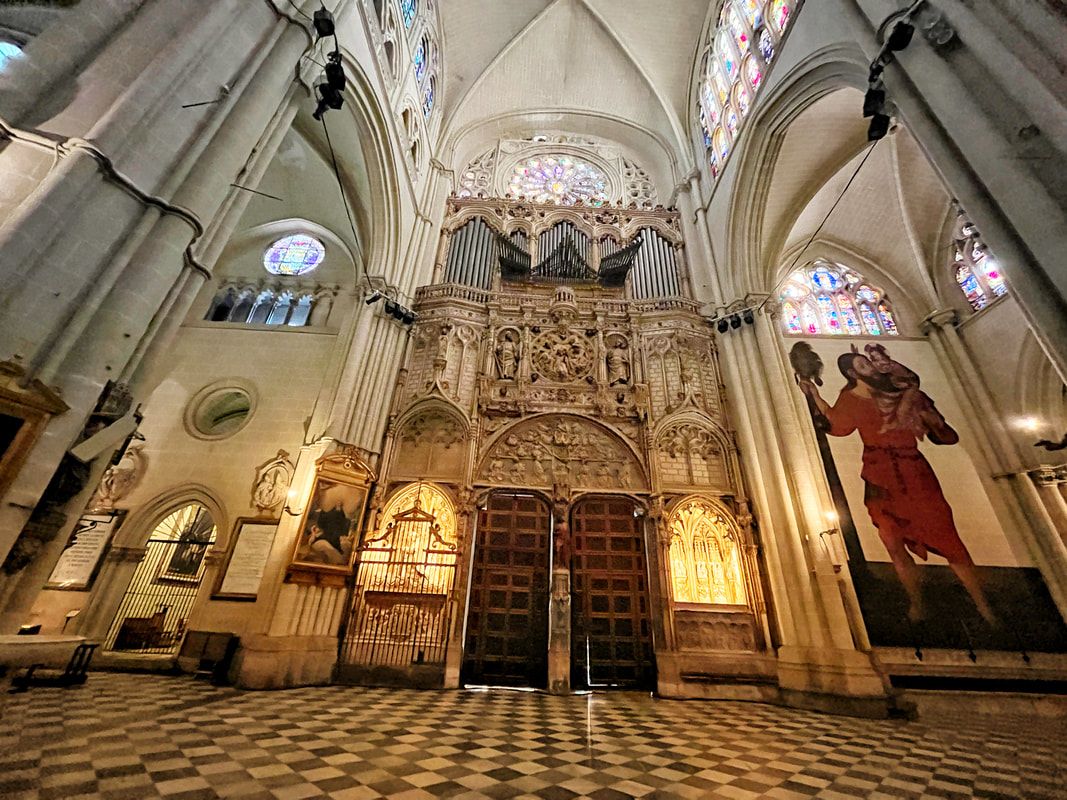 Art is everywhere - from the grand architecture to the small wooden carved panels on the door!
One of the outstanding pieces is the  Baroque altarpiece called ‘El Transparente’. Its name refers to the unique illumination provided by a large skylight - ( basically a big hole in the ceiling!)-  cut very high up into the thick wall  behind the high altar, and another hole cut into the back of the altarpiece itself to allow shafts of sunlight to strike the tabernacle. 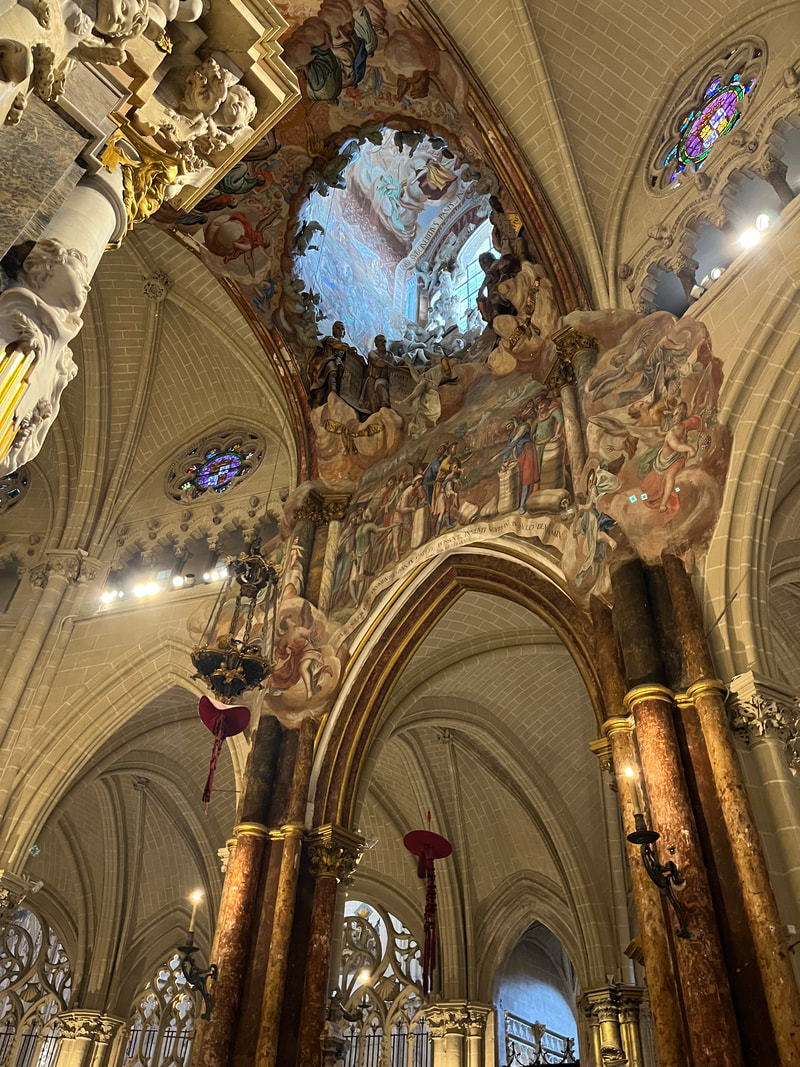 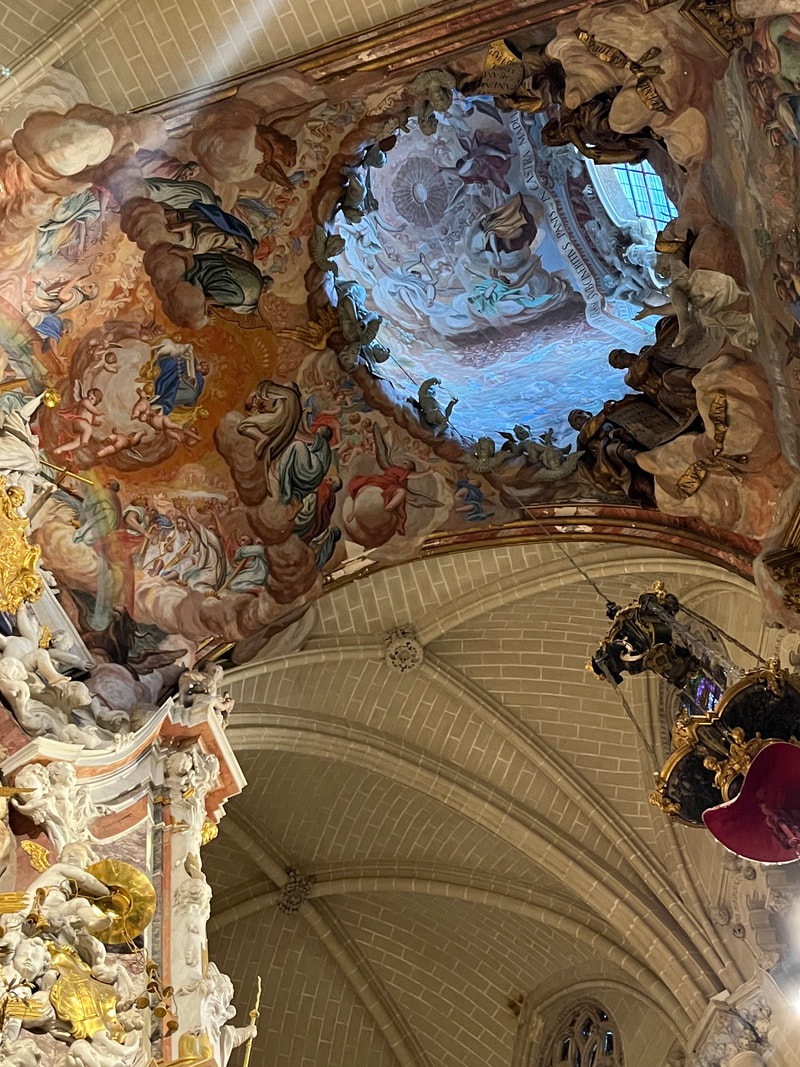 This was designed by a genius called Narciso Tome, and he must have caused a collective heart failure across the ranks when he decided to cut holes in the grand structure to let the natural sunlight fall on to his fantastic artwork! 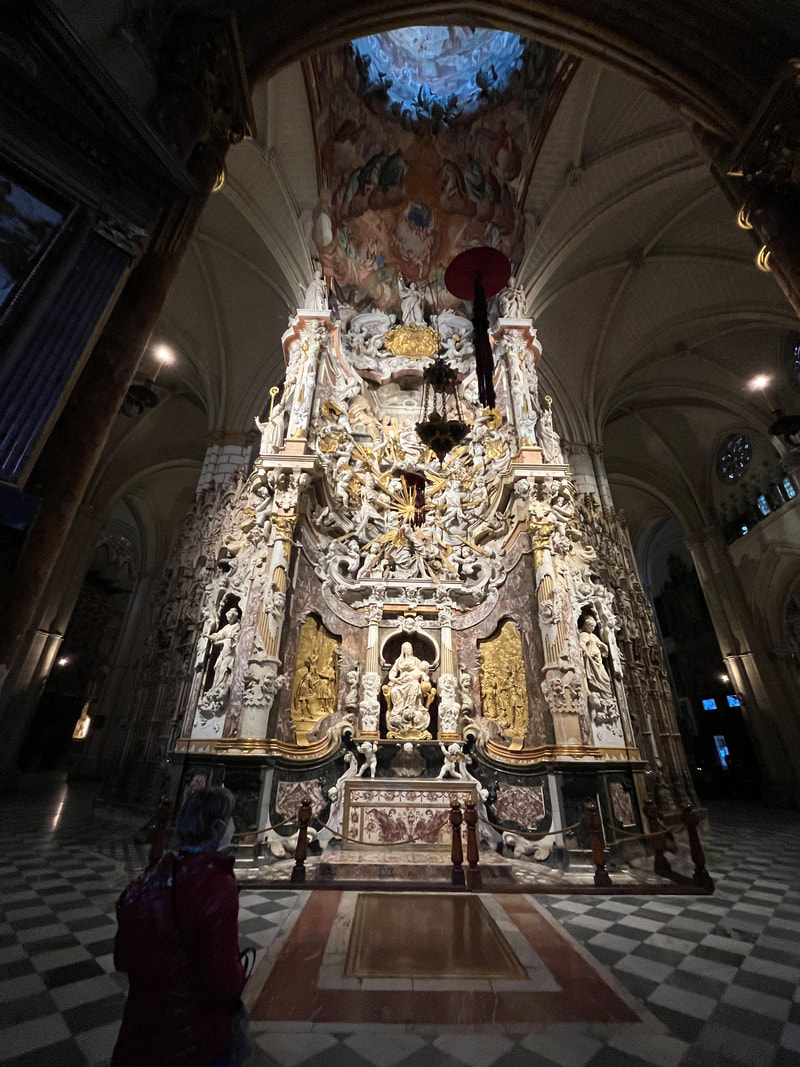 Just imagine the guts of the guy - a gothic cathedral is one the grandest architectural challenges ever in the medieval world! It is nothing short of a design and construction masterpiece in those times to create such a towering structure - these high domes and unsupported roofs were like a miracle! It is difficult to build one even with today’s modern science today.
And he wanted to cut holes in it! 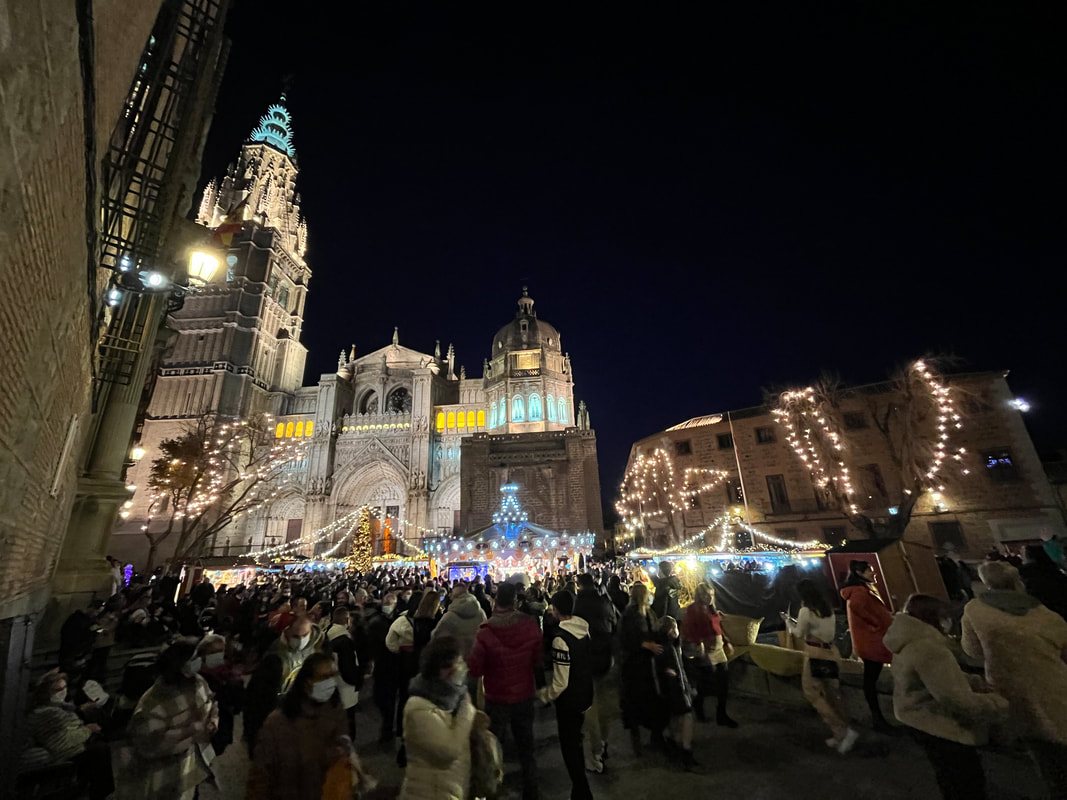 Now that the sun had set, the fun fair in front of the cathedral came into its own, with its gaily lit stalls and colourful merry-go-round and various attractions. 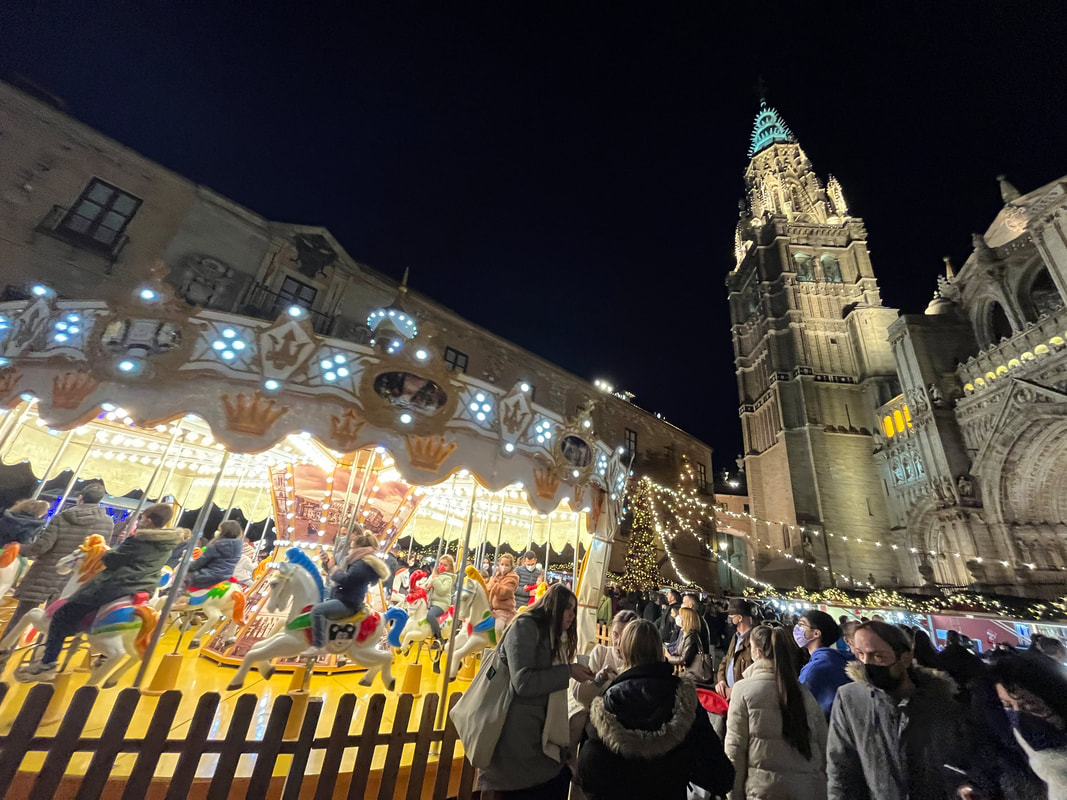 Something smelt very delicious and alcoholic and I sniffed around like a prize K9 police dog till I found the place - it was a stall selling ‘Vino Caliente’! Hot mulled wine! ‘Mulled wine’ means red wine spiced with …er…spices
Next to it was a stall selling sausages on bread! Yummy looking sausages, including the black ‘Morcilla’ sausage which is made with pigs blood!  I had to try it!
​I cannot resist trying something new and weird! It was quite interesting - a very different sensorial experience in your mouth. And your brain keeps shouting - WHY ARE YOU EATING SOMETHING MADE OF PIGS BLOOD?
Obviously, it’s not just blood .. You are not going to become an oinky Dracula by eating it. It is ground pork mixed with pig's blood, along with seasonings and spices, chopped onions, and filler …usually rice. It has a dense consistency, and an intensely rich flavor with a slight tanginess. When morcilla is cooked and fried in spanish olive oil, it becomes a spiced sausage with a mild tang and a crumbly texture, quite different from a normal sausage.

Toledo is also the city of Don Quixote - the Man from La Mancha. Toledo is the capital of the La Mancha region 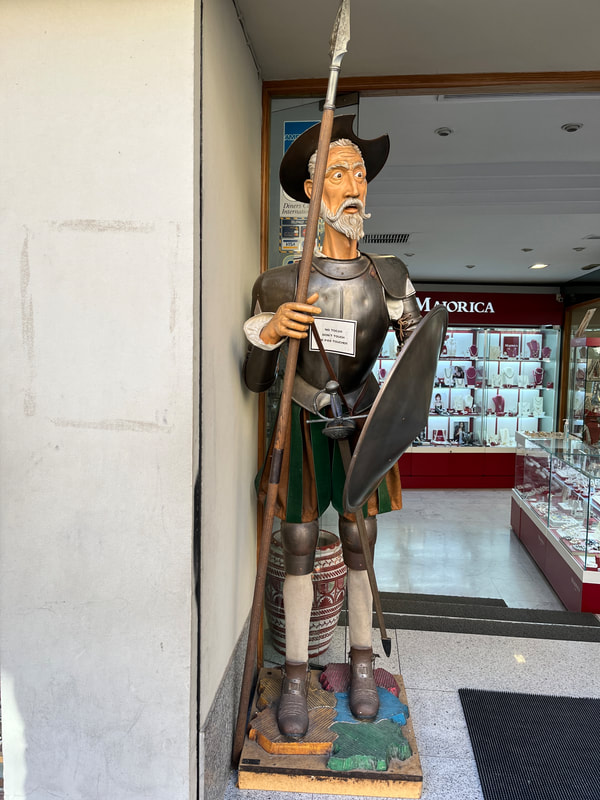 ‘Don Quixote’ was written by Miguel Cervantes - the greatest writer in the Spanish language and one of the world's pre-eminent novelists. (The foremost prize for Spanish literature today is called the ‘Miguel Cervantes prize’)  This book is considered  the first modern ’novel’  and is so ubiquitous today - with words like ‘Quixotic’ and phrases like ‘tilting at windmills’ in common use - that it is staggering to think that it was written way back in 1605! More than 400 years ago!
In fact, it is amazing to think that Shakespeare and Cervantes were contemporaries! Isn’t it wonderful that the most influential writers in English and Spanish were producing their best work at the same time? It must have been a competition between the Muses!
The entire city of Toledo is a UNESCO world heritage site! 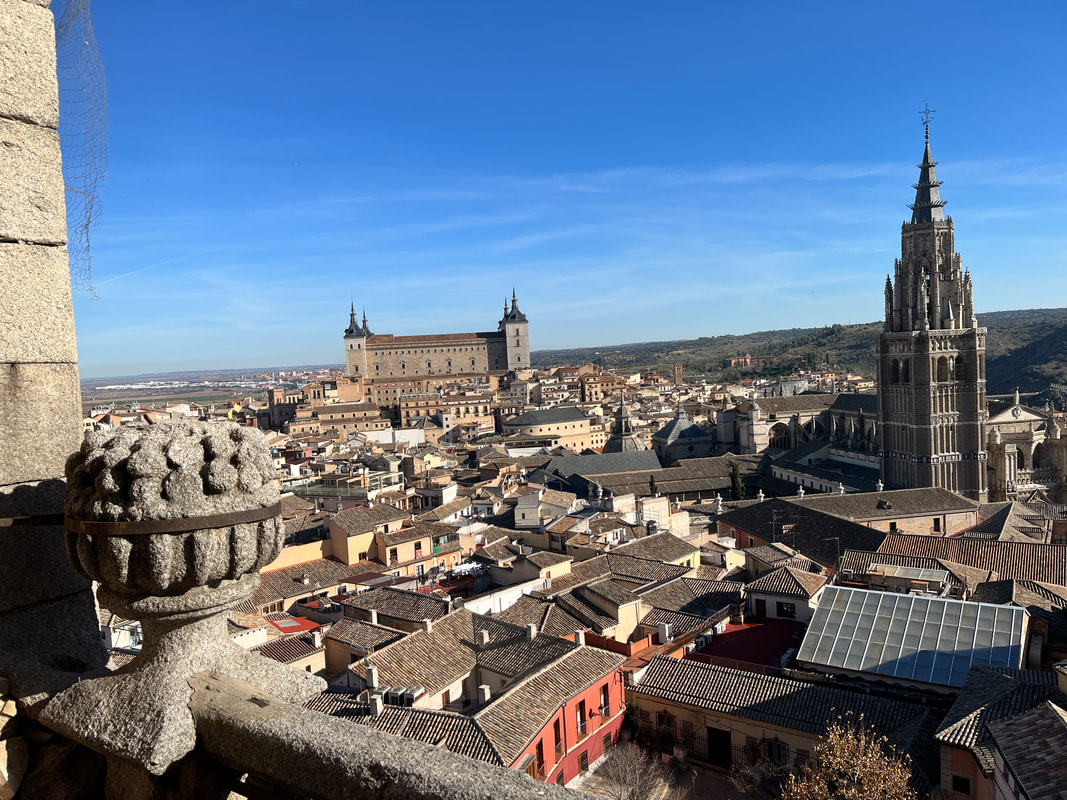 IAnd has artefacts of Christian, Jewish and Muslim culture. 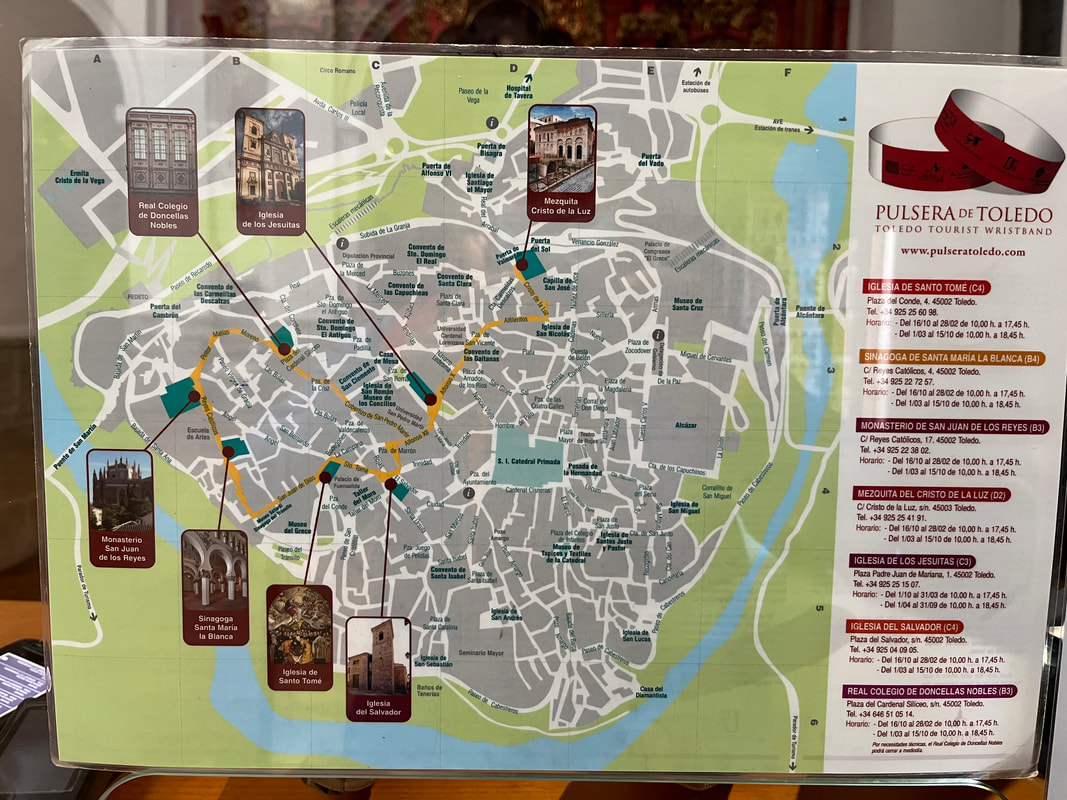 This ‘Jewish quarter’ was an interesting place - because it shows the memories of the Jewish population who were treated pretty shabbily in the medieval period. The Jews had been an important part of the community earlier, being merchants and moneylenders and basically people who made the economy run.
In an interesting contrast to our current period, Jews were actually well treated under Muslim rule, and got it in the shorts under Christian rule. The medieval period - especially of the muslim occupation of ‘Al Andalus’ - is regarded as the ‘Golden age of Jewish culture in Spain’ as the Moors brought in an era of learning and religious tolerance. The Jews were given special protection as ‘people of the book’ and were allowed to go about their business in peace.


‘Tolerant to all creeds, especially Christians and Jews, known as People of the Book because they, too, followed the Old Testament, Abd-al-Rahman welcomed scholars from everywhere.’ 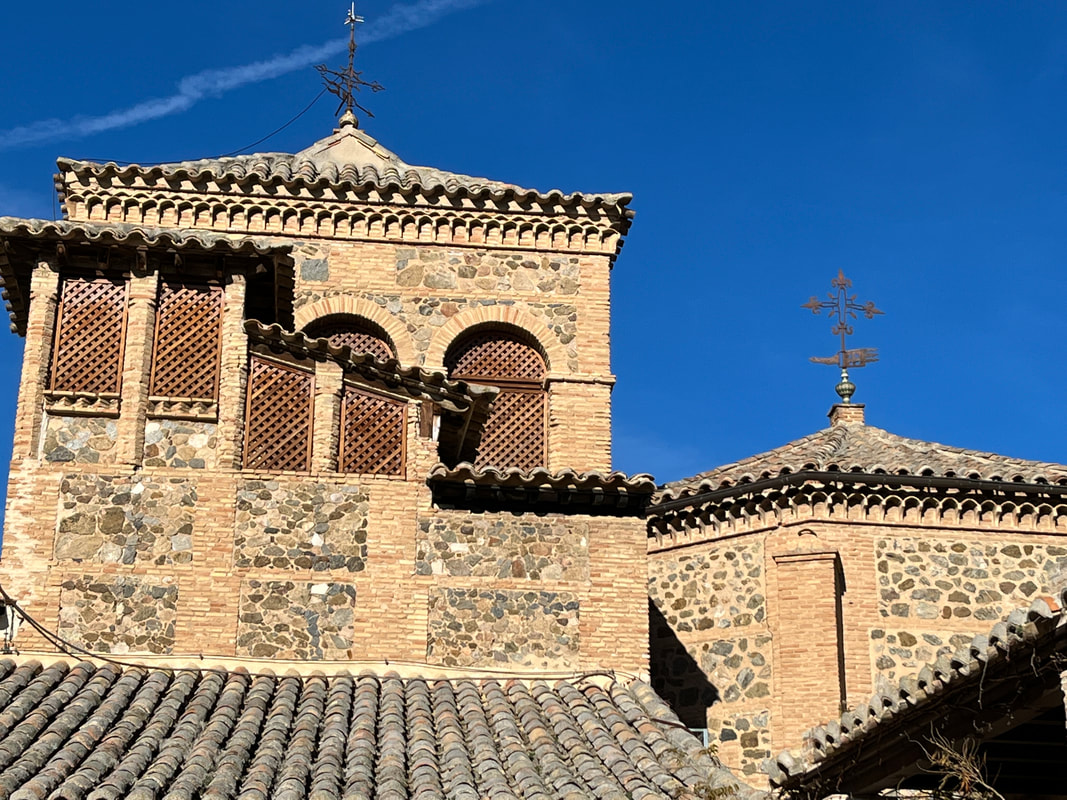 The house of great artist ‘El Greco’  - the ‘Museo El Greco’. ‘El Greco’ literally means ‘the greek dude’, and refers to the artist Domenikos Theotokopoulos, who was born in Greece but spent most of his time in Toledo. It was not his actual house - he died in 1614, so the actual house does not survive. But he lived in the area - in the ‘Jewish quarter’ - and so I suppose they felt that any normal old Jewish house would do to show how his house must have been like. There are a number of original El Greco paintings here, along with  old pots and pans and old furniture to give the feeling of a house. 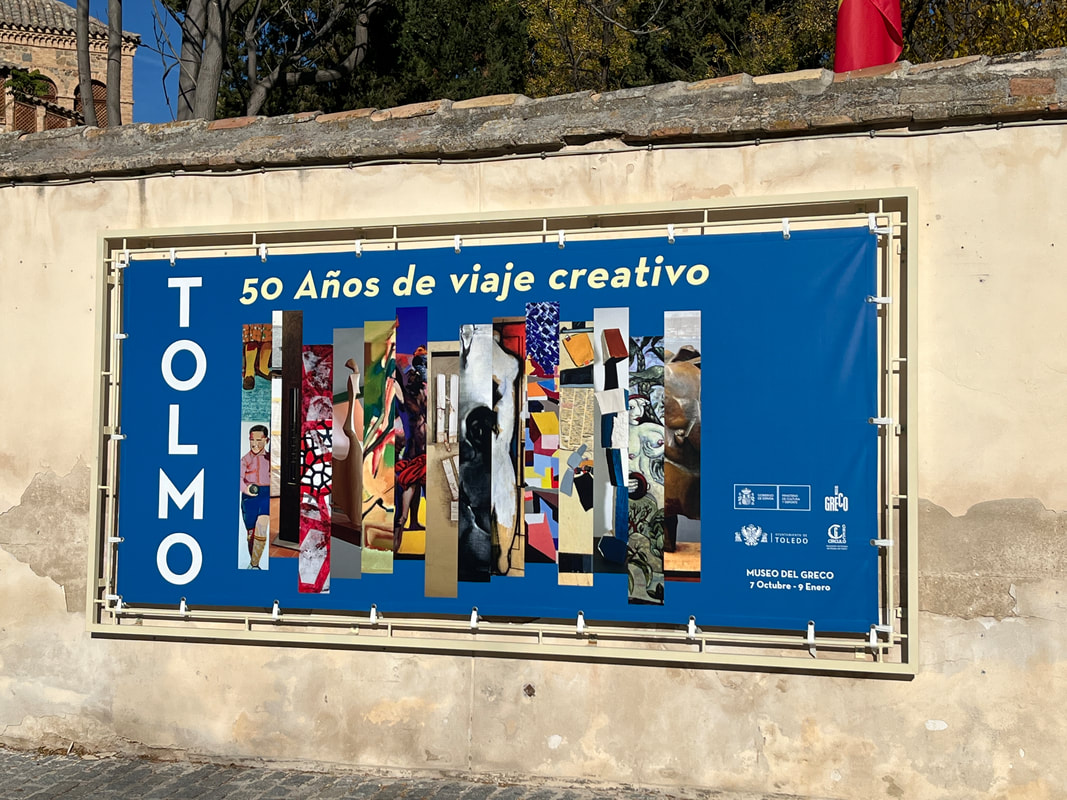 After the ‘Reconquista’ - when the Christians kicked out the Moors in 1078, things started to get bad for the Jews.
As it is, all the various types of Christians were fighting amongst each other - ‘SECTS SECTS SECTS…is that all you think about?’ … and the only thing that brought them all together is find another enemy who they can all hate. Earlier, that role was filled by the Muslim enemies - all the Christians came together to fight the ungodly Muslims - Moors, Turks, Persians, Arabs and what have you.  And once they had succeeded in driving out all the muslims -  that ‘universal villain’  role devolved on the unfortunate  Jews.
The snarling Catholic priests started Jew-baiting with a vengeance, stating all kinds of reasons… Jews were the killers of Jesus, Jews were partners of Muslims, Jews were not Christians, Jews were circumcised…you name it. While the nastiness was started by the crazy priests, the monarchs were happy to  encourage this because they had all taken huge loans from Jewish moneylenders, and obviously didn’t want to repay them.

How cool to not repay loans, but to kill the creditor instead - and steal all his property to boot!
Spain passed the ‘Alhambra decree’ in 1492 (immediately after the reconquista)  - which told all the Jews either to convert to Christianity or get the hell out of Spain!
The joint Catholic Monarchs of Spain (Isabella I of Castile and Ferdinand II of Aragon) first invited the infamous ‘Spanish Inquisition’ to come and torture, main and kill  Jews in 1478 (though, to be fair, the Inquisition tortured, maimed and murdered a fair number of Christians as well! Just make an anonymous complaint against anyone you dont like and see the Inquisition ‘put them to the question’ with hot irons and torture implements) -  and then finally chucked them all out of Spain in 1492 -  lock, stock and barrel!
After the ‘Expulsion of the Jews’ decree was passed, Spain's entire Jewish population was given only four months to either convert to Christianity or leave the country! Four months! They were permitted to take their belongings with them, but NOT  "gold or silver or minted money or other things prohibited by the laws of our kingdoms.”. So the kingdom stole all their money and belongings and chucked them out with literally only the clothes on their backs.
The punishment for any Jew who did not convert or leave by the deadline was summary execution! Chop chop! 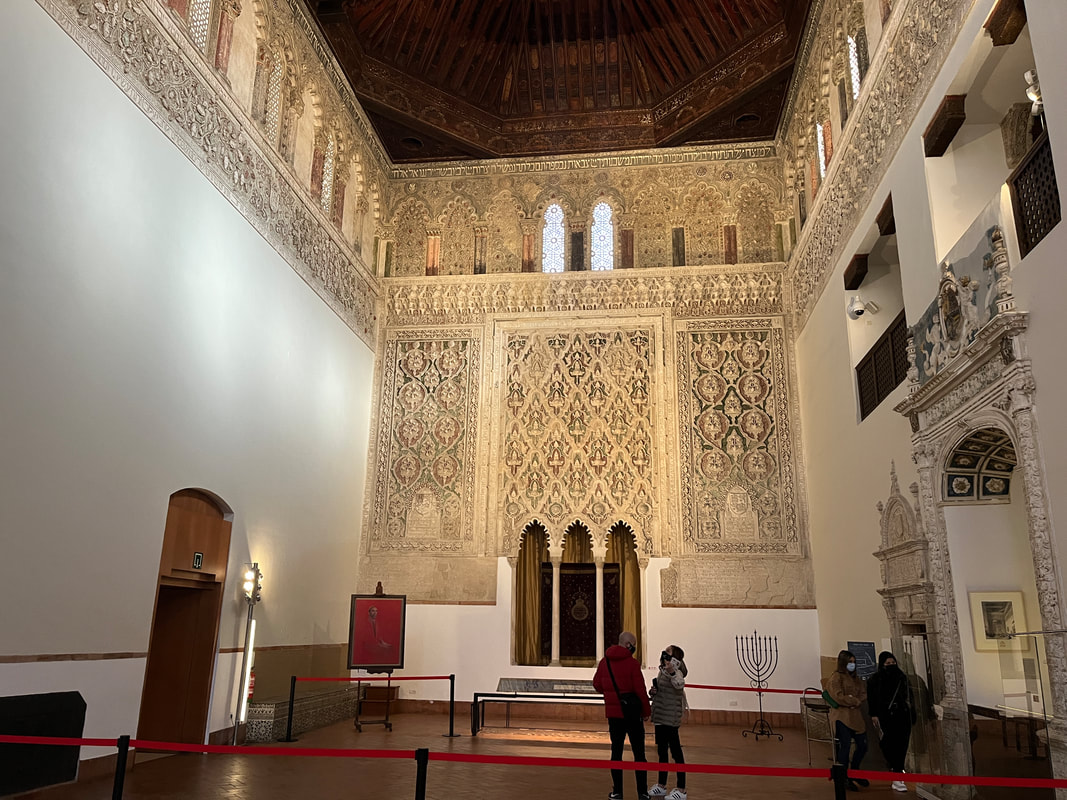 Now of course, there is perfect peace among Christians and Jews - and even Muslims - in Spain and there are a number of Jewish museums in the Jewish quarter - such as the ‘Synagogue of El Tránsito’. This was a historic synagogue, which became a church after the expulsion, then a military barracks under the Napoleonic wars, and is now a museum - the ’Sephardic museum’ - of Jewish culture - and the ‘Synagogue of Santa María la Blanca’, which is also a similar synagogue to church to museum story. 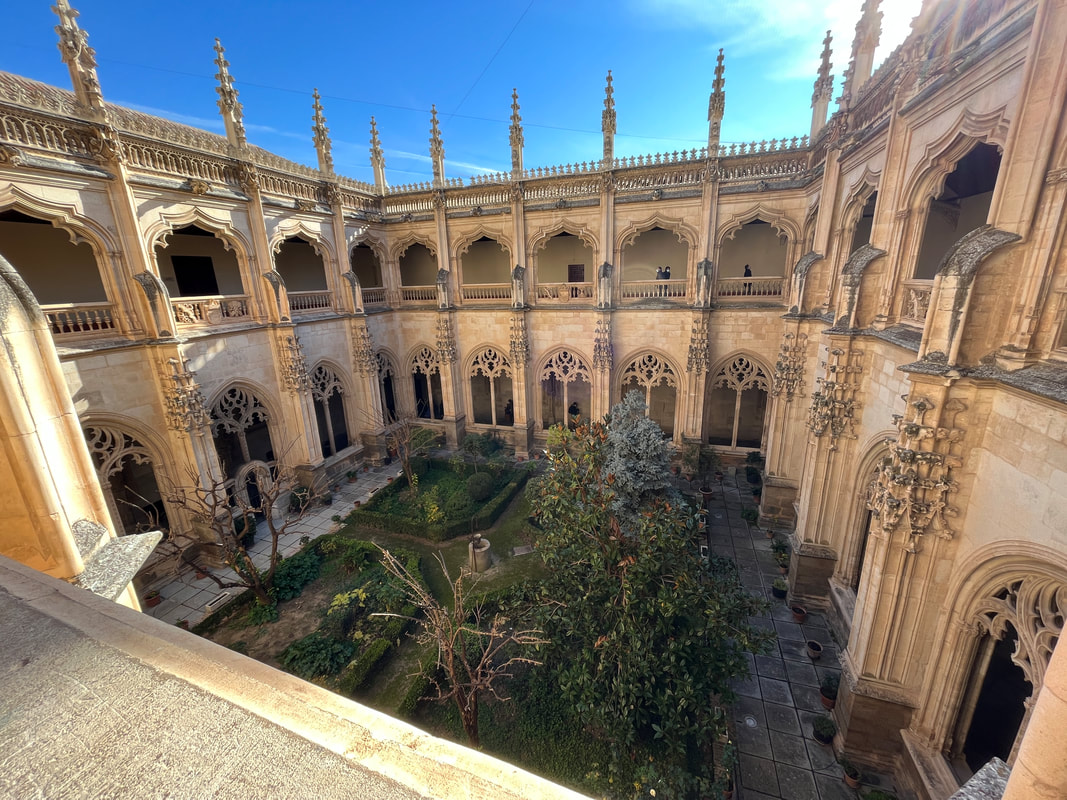 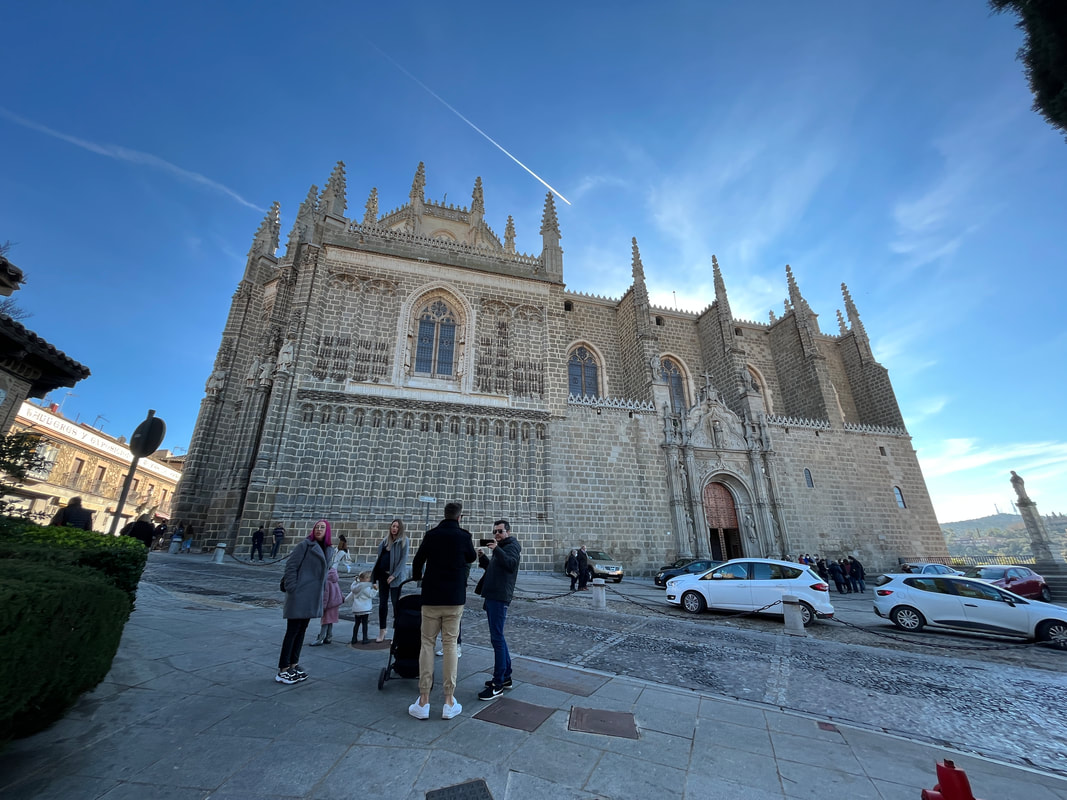 I blundered into a beautiful old church - the Monasterio de San Juan de los Reyes - and was pottering around looking at the carvings and stuff, when suddenly there was a burst of singing and a I looked up to see that the church service had started! It would have looked rude to walk out just as the service had started - and anyway, I was fascinated by the sight of the priest in his lovely colourful robe. It was a wonderful opportunity to experience a church service in Spain.
The service  was in spanish, so I didn’t understand even a word…but it was fascinating all the same. I sat through the entire service with the psalm singing, and the recitations from the members of the congregations, to the exhortations of the priest, to the lovely ‘turn around and hug your neighbour like a brother’ thing. 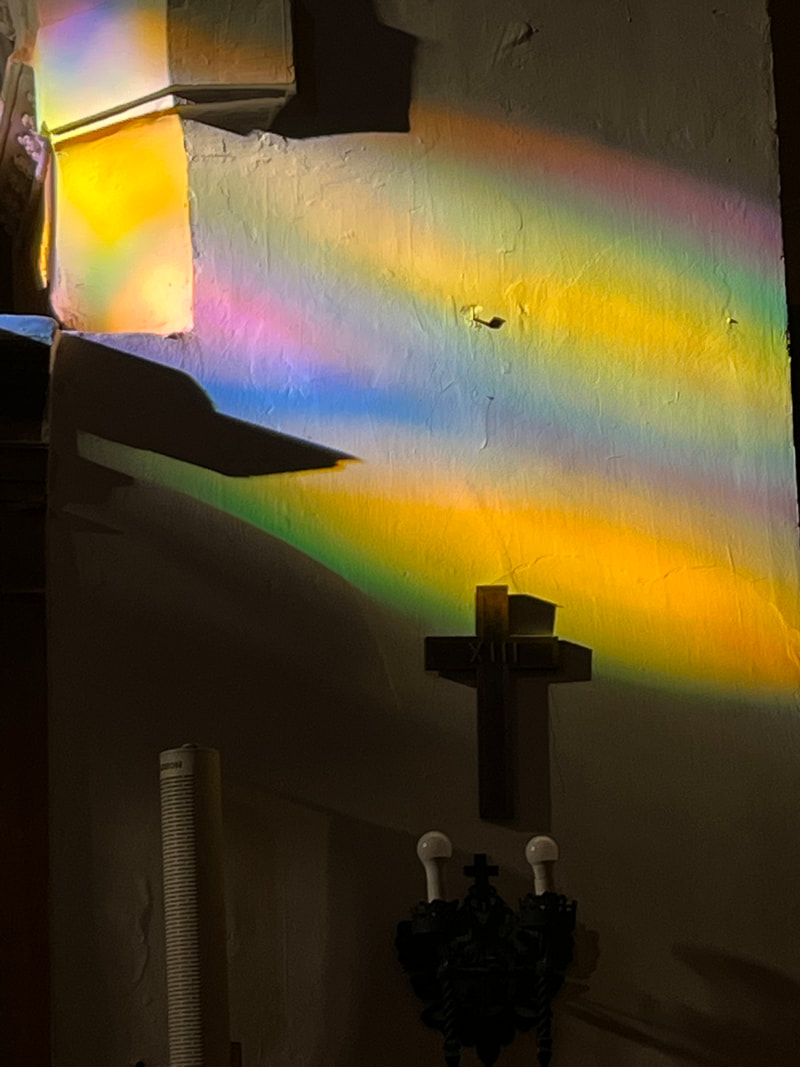 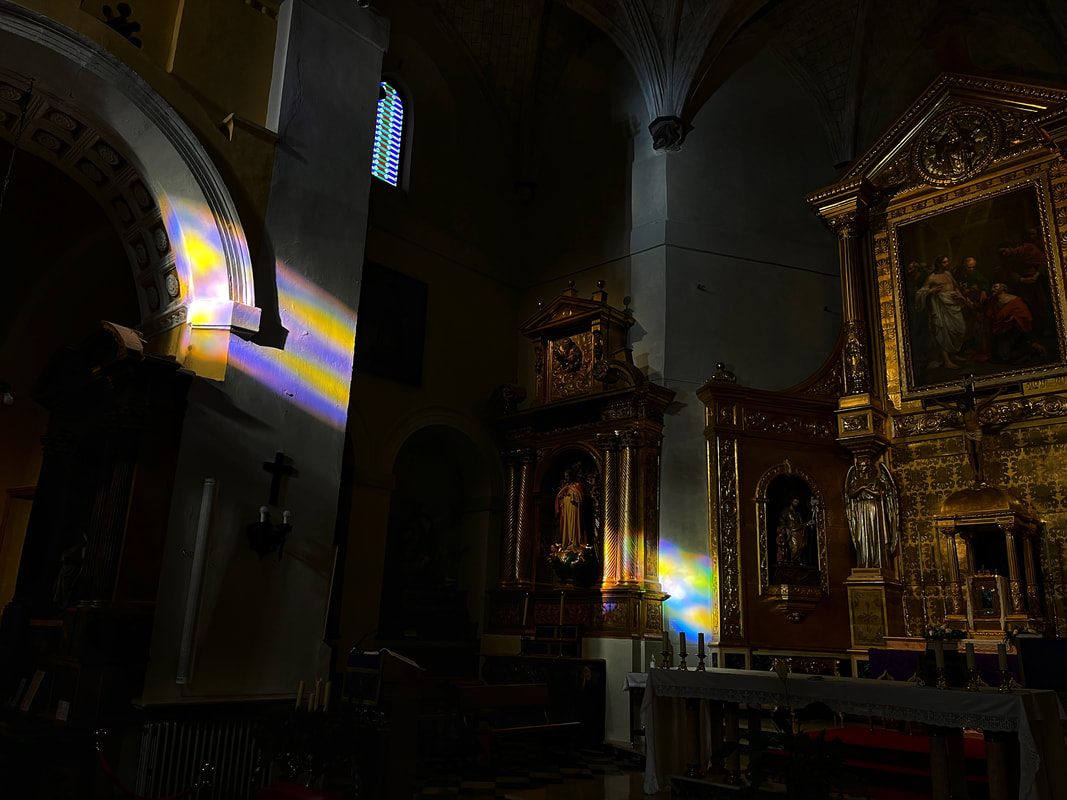 No wonder the whole city is a UNESCO world heritage site! There is more heritage here than you can shake a stick at! And it is wonderfully well preserved and maintained! You can spend a week here and still not see everything properly.
Malaga
one man goes to antarctica
one man goes to spain