I was writing my blog - and suddenly realised with a start that I was almost late for my date with the Prado museum! Bharathi had booked a ticket for 10 AM and I quailed to think of what she would say if I was late for my very first booking!
I quickly got ready and checked with the hotel as to the best way to reach the Prado - Bharathi had babbled about metro lines - But the hotel people said that  I should not bother with the metro - it was just a 10-15 minute walk from the hotel to the museum.
Well - to go down to the metro, wrestle with the machines, go down to the platform, wait for the train, get out to the street level, etc would probably have taken more than 15 minutes. Anyway the weather was very nice and a walk sounded most agreeable.
​
The walk to the Prado took me through the heart of Madrid and I passed a number of lovely town squares and beautiful old buildings 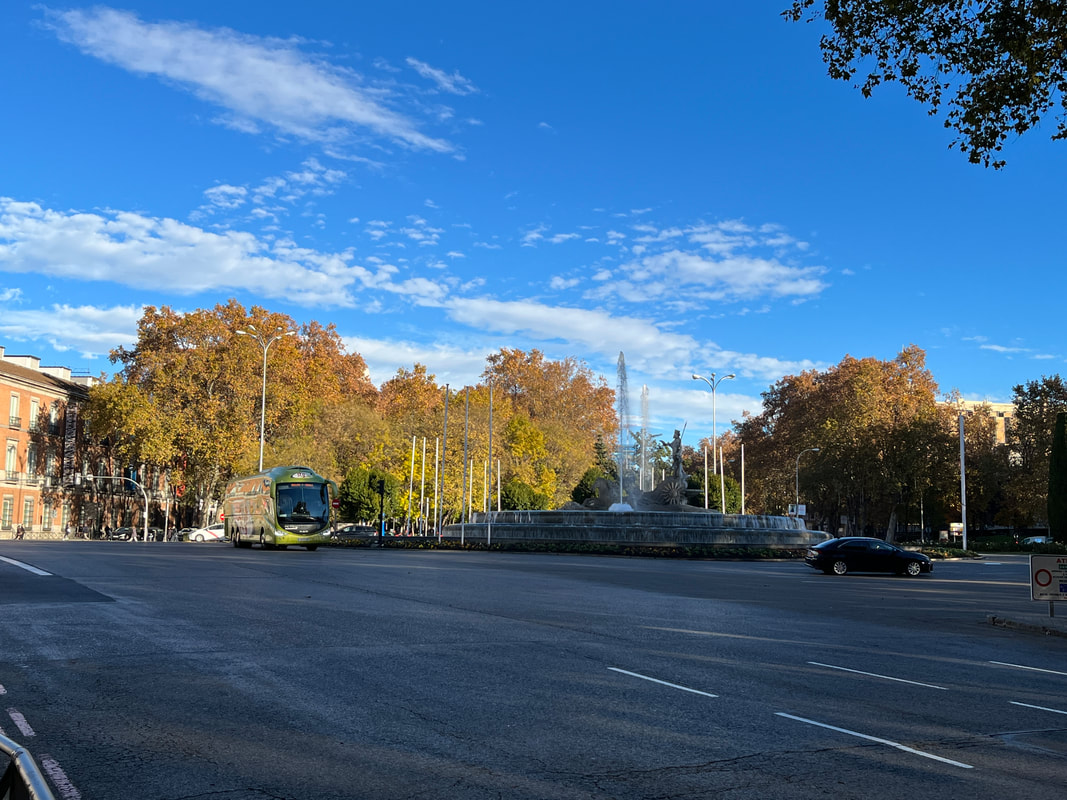 My eye was caught by a grand building! It was a massive Roman temple of a building, with grand Corinthian columns and a triumphal arch with figures of the goddess of Justice and a number of her divine hangers-on. The sign on the building said that it was the ‘Congreso de los Dispudatos’.

I first read it as ‘Desperados’ - so for a moment I thought of the wild west -  cowboys and outlaws and sherriffs blazing away at each other with their trusty six-shooters! I could almost hear it! ‘Eat lead, you cow-critter-rustling varmint!’ and  ‘you will never take me alive, lawman!’

​But no, that can’t be right… I looked more carefully and saw it was ‘Disputados’ and not ‘Desperados’.
It was the Parliament house! What a lovely place! 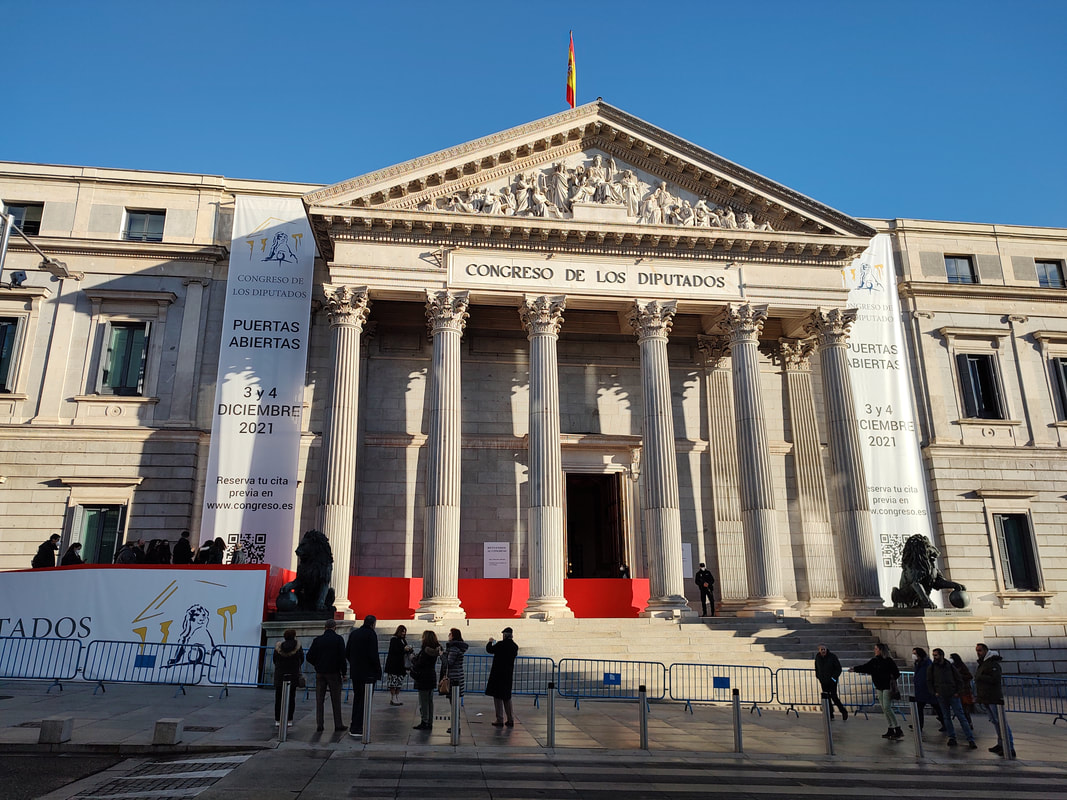 The building that is now the home of the Museo Nacional del Prado was designed in 1785 on the orders of King Charles III to house his ‘Natural history’ collection. But after Charles died, his son King Ferdinand VII  decided to chuck out all the stuffed animals and bits and bobs,  and make it into a ‘Museum of the Arts’ instead. Thus it became the ‘National Museum of Painting and Sculpture’, and was opened to the public in 1819. It was created with the aim of showing the works of art belonging to the Spanish Crown and to demonstrate to the rest of Europe that Spanish art was of equal merit to any other national school. 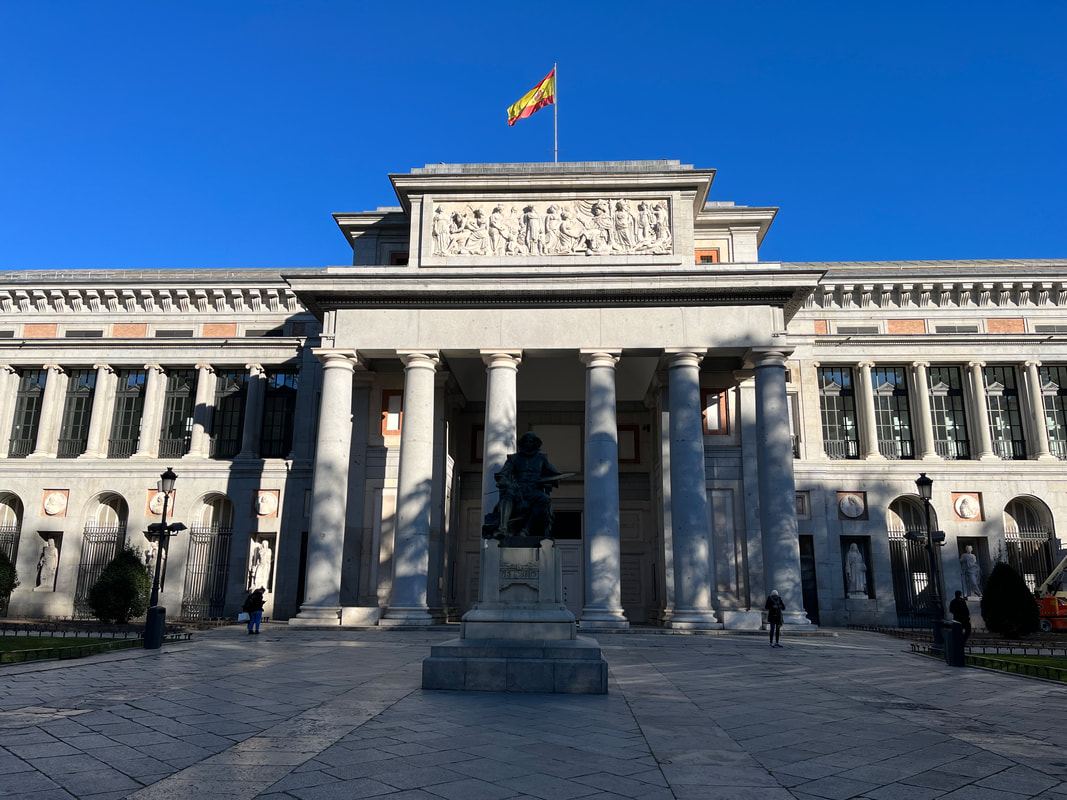 The Prado museum
Today, the Prado Museum is considered one of the greatest art museums in the world, and has numerous works by great artists like Francisco Goya, Hieronymus Bosch, El Greco, Peter Paul Rubens, Titian, and Diego Velázquez. 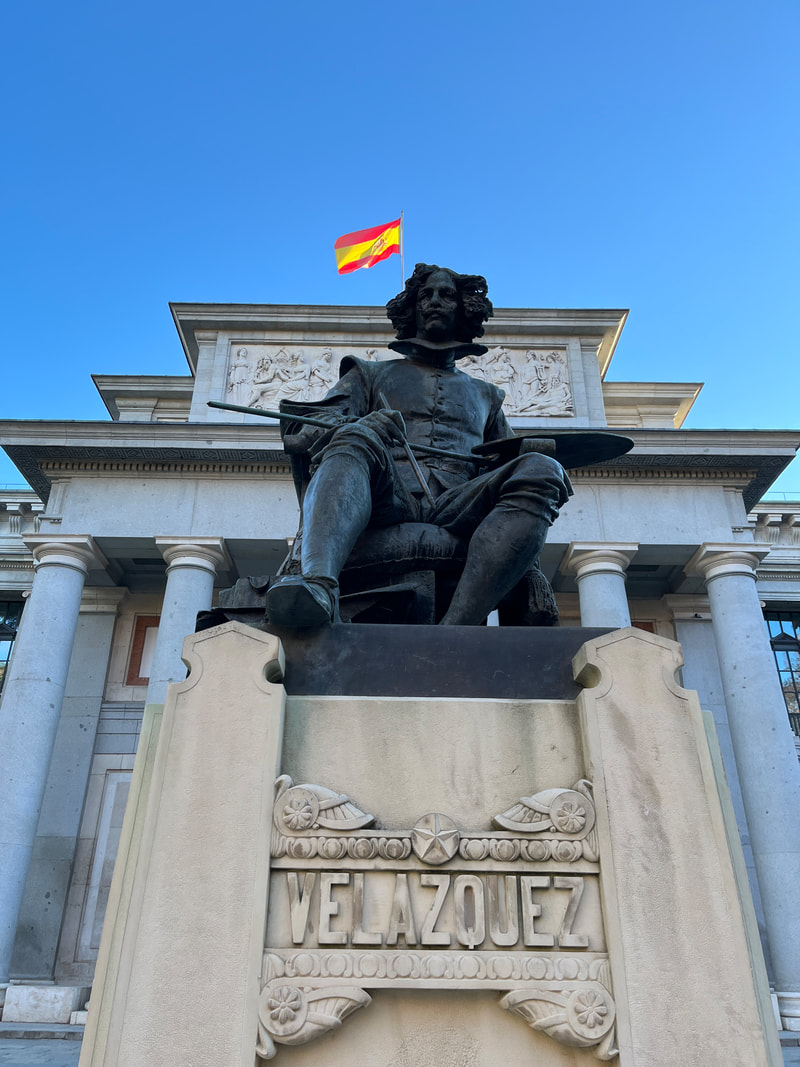 Diego Velasquez, the great court painter
​I saw a nice garden next to the museum and hobbled over to relax and let my feet and legs recover from the torture. But as I reached the gate, a burly security guard stopped me and told me that I could not enter it without a ticket!

​A ticket! To enter a garden?’ I cried
‘Ah! But this is not just any garden!’ he replied ‘This the Royal Botanical Garden!’


It turned out to be the ‘Real Jardín Botánico de Madrid’ - the Royal Botanical gardens of Madrid.


This is a 250-year-old garden, and was one of the first great botanical gardens of the world!


In the 1700s, a wealth of new plants  had been discovered in the new world - and it was a treasure trove for the old world! The scientists wanted to increase knowledge and scientifically classify all the new findings, the Farmers and Landowners wanted new and useful  plants which they could farm and sell - and the Monarchs wanted to show off the scope and power of their empire.
All of these aims could be realised by having giant botanical gardens  - you could study plants and trees, grow them and show them off - and sell them!


This garden was first started in 1755 and contained more than 2,000 plants collected by a single guy - José Quer y Martínez, a medical doctor with a passion for botany. It was moved to its current location in 1781 and scientifically redesigned, arranging plants according to the new scientific  method of  Carl Linnaeus. Its mission was not only to exhibit plants, but also to teach botany, promote expeditions for the discovery of new plant species and classify them. 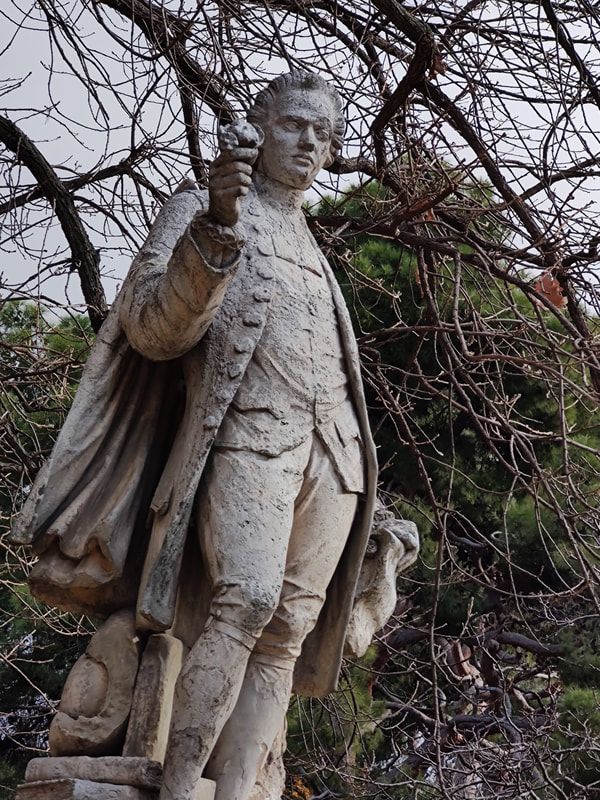 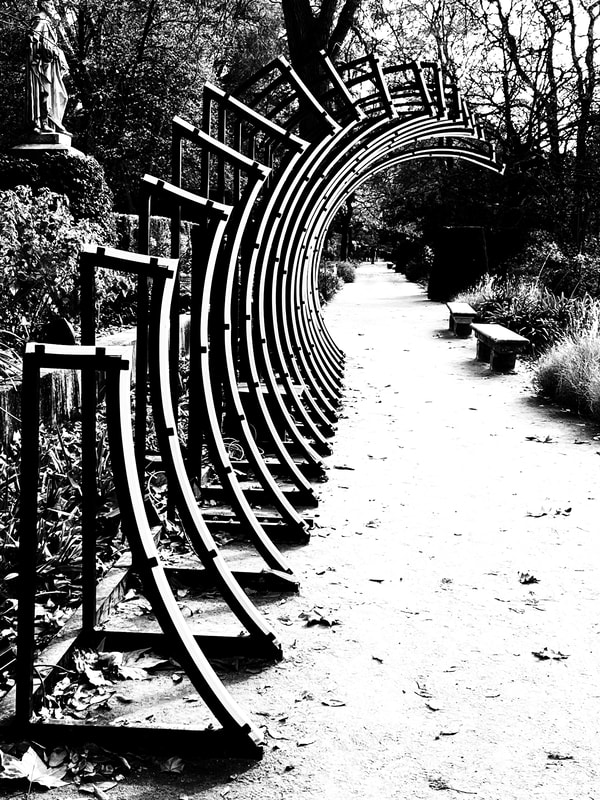 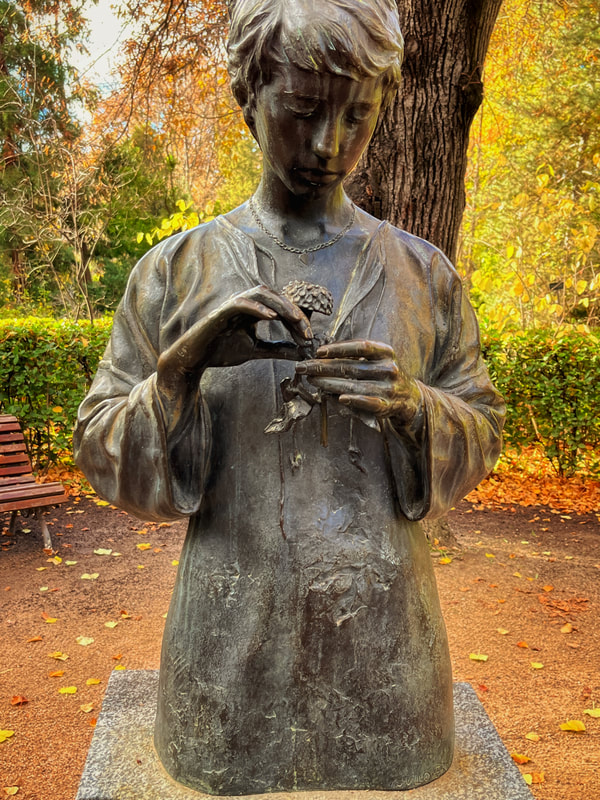 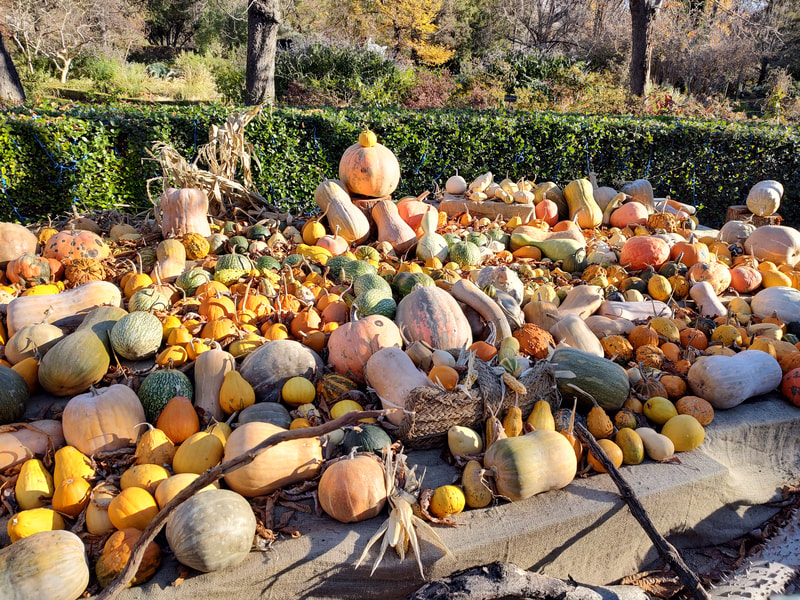 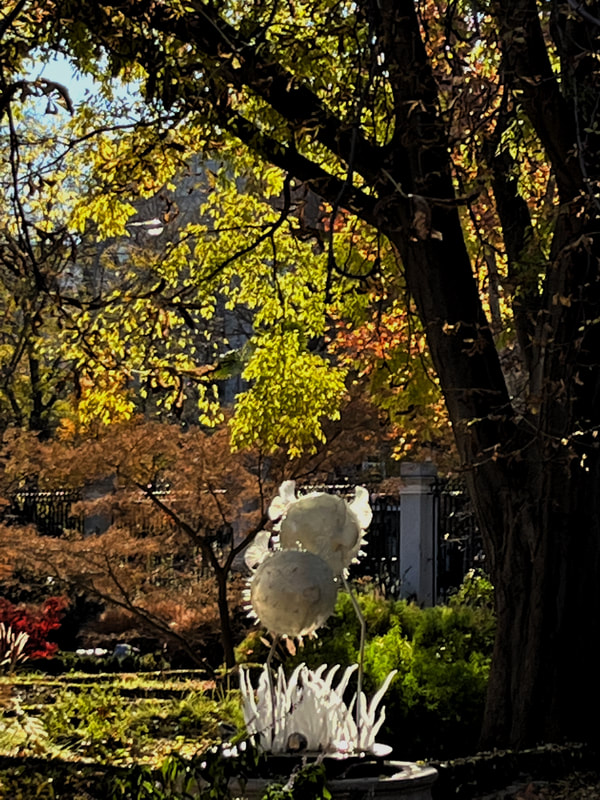 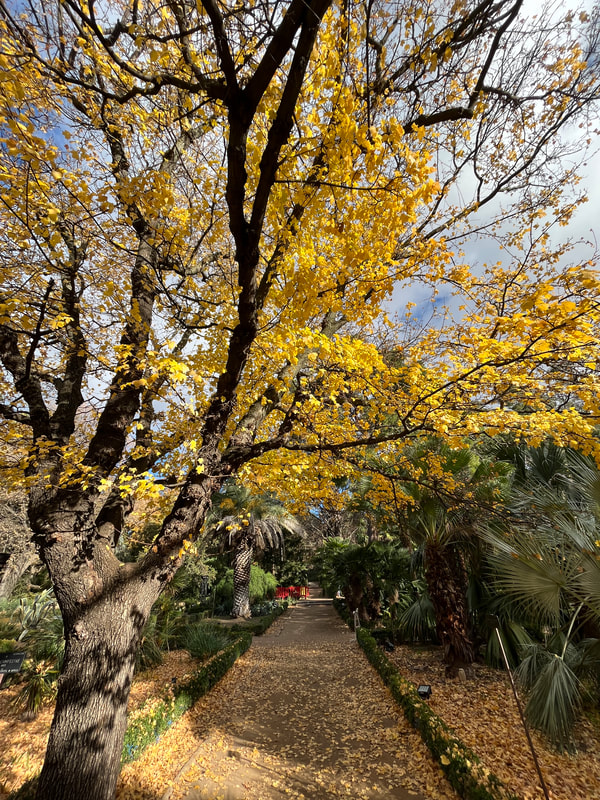 I was dog tired when I got back from seeing the Prado and the botanical garden - the jetlag, the disrupted sleep schedule and the lack of lunch all added to the aching feet. Slow walking in museums always leads to very painful feet,  and the poor fellows have to support my very heavy weight! 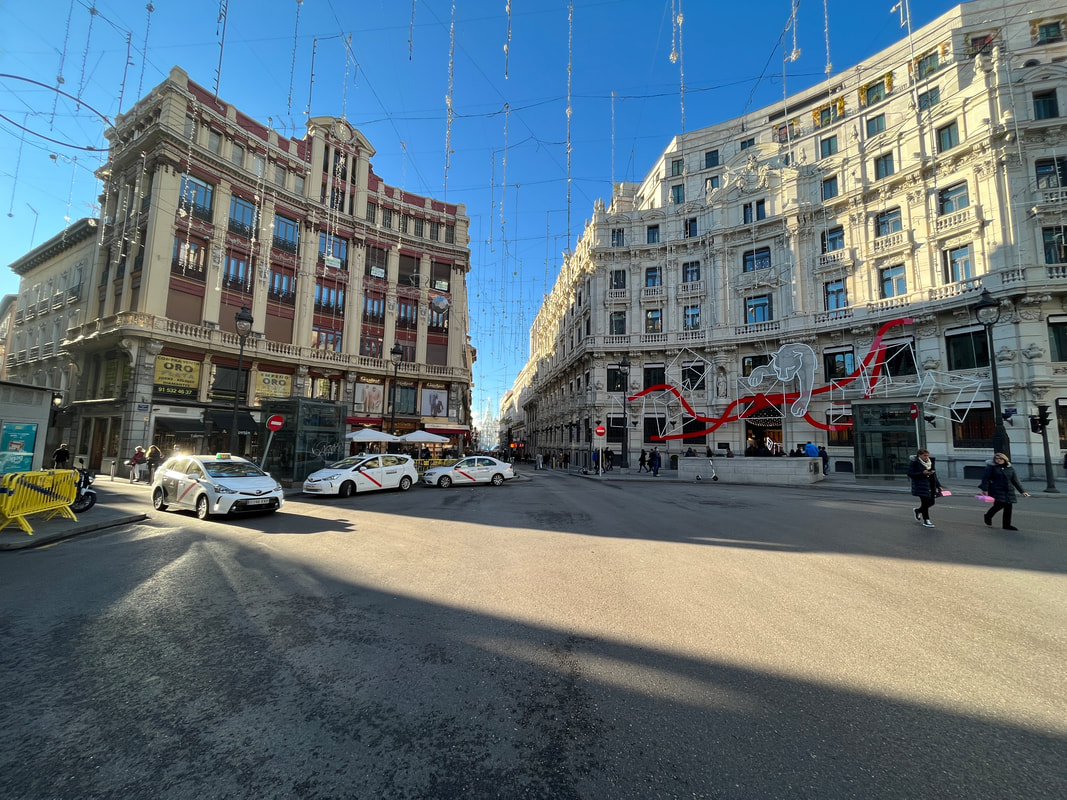 I was in the great  ‘Sol plaza’ - or the Puerta del Sol -  ‘The gate of sun’ - one of the best known and busiest places in Madrid. This is the centre - the ‘Zero point’  -  of the radial network of Spanish roads. All the major highways of Spain technically start from here and fan out to all corners of Spain! Talk about being at the centre of things! In olden times, the Post Office was also based here, and therefore the area was an important meeting place: as the goal for the couriers coming from abroad and other parts of Spain to the Post Office, it was visited by those eager for the latest news 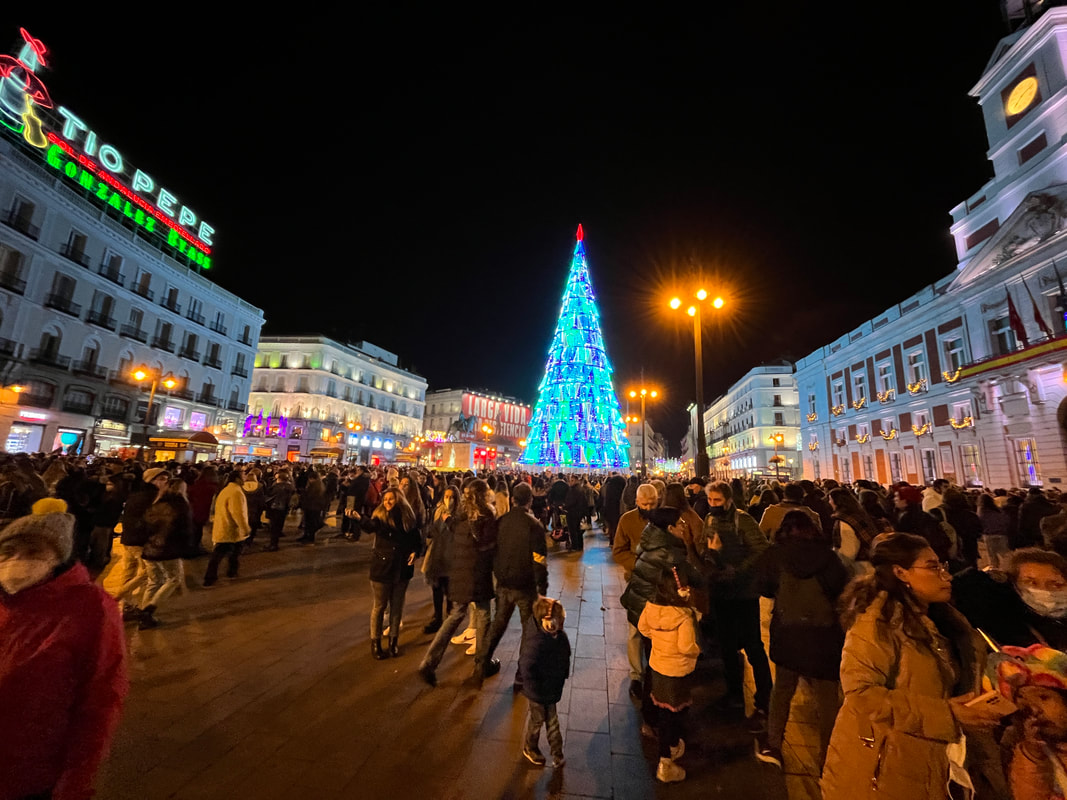 The most interesting building there is the huge Apple store! 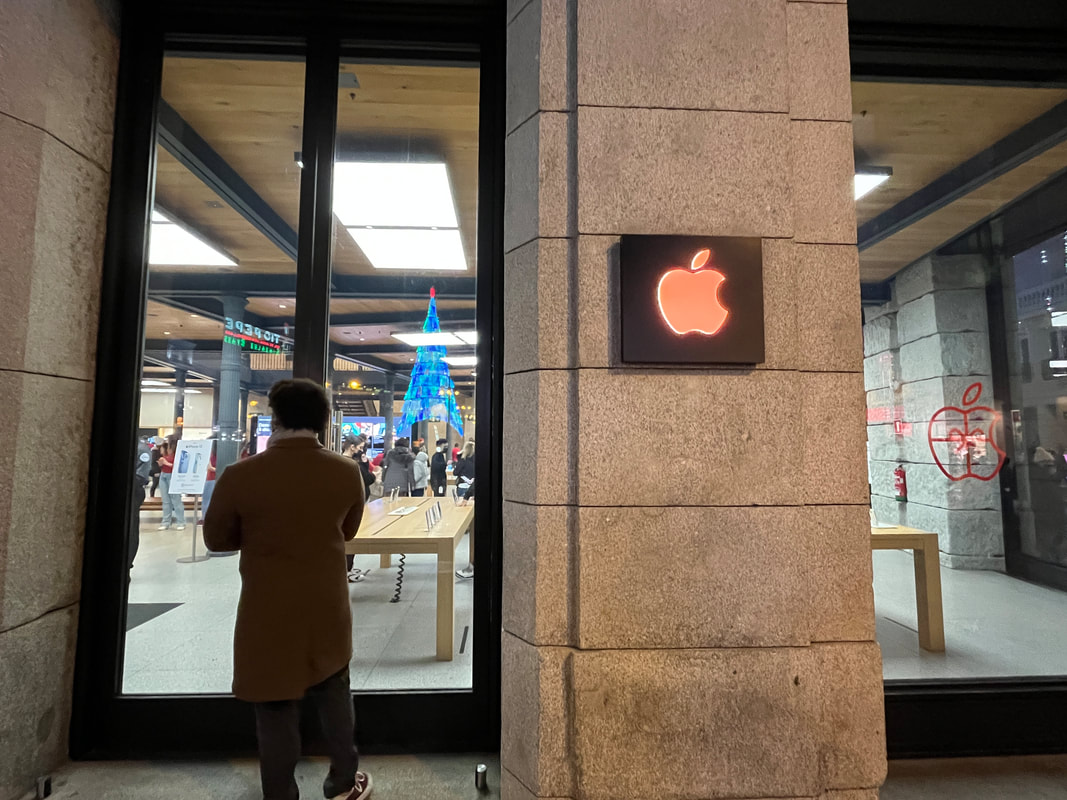 No - not because of the latest iPhone model launch, but because this Apple store is located in a historical building, which used to be a 500 year old plague hospital!  It then became a church. But in the 1800s, there was a wave of anti-clerical sentiment in Spain - and the church was demolished and the land appropriated by the state. The land was bought by a private party and a hotel was built on the spot. This hotel had a famous coffee shop where the intellectuals would hang out - and quarrel! A famous playwright apparently got into a ferocious quarrel with a journalist which degenerated into such a violent fight, that his arm got chopped off! Ew!
That hotel also closed down at some point, and the structure has been refurbished several times since then and has been a place of business rented out for various purposes - and now - is an Apple store! 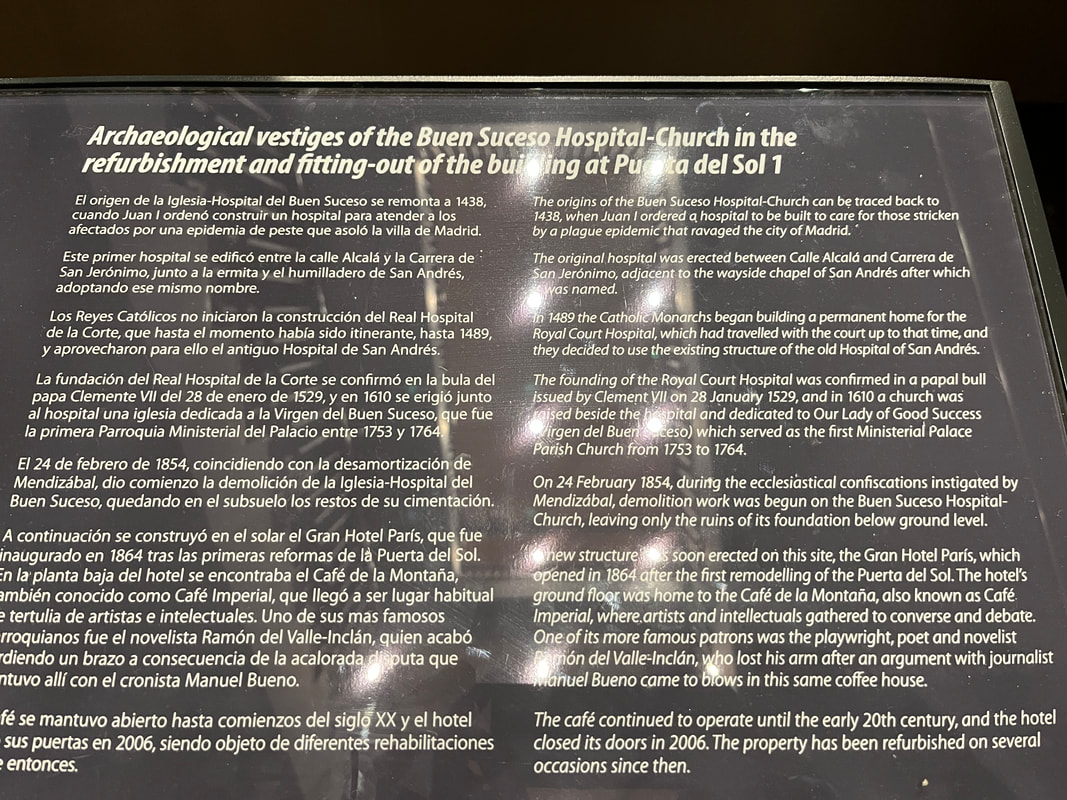 The funniest part was that the Apple store people had converted the catacomb basements into conference rooms with glass walls. So I suppose the Apple people meet up in the conference rooms and discuss sales of the  latest iPhones and Macs while looking at the remains of a 500 year old plague hospital.

This has to be the coolest Apple store ever! 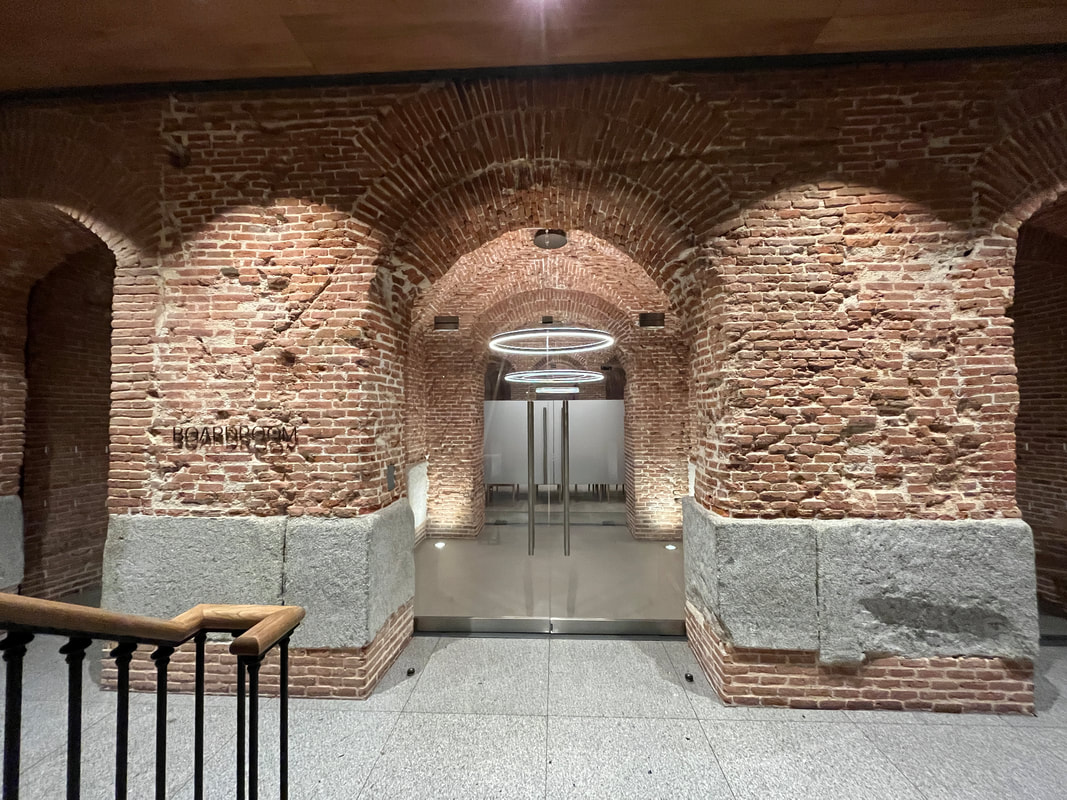 ust outside the Apple store was a big bear! Not a real bear - but a statue of the symbol of the city of Madrid - The Statue of the Bear and the Strawberry Tree (El Oso y el Madroño). It represents the coat of arms of Madrid since the 13th century. Before that, the symbol was apparently just a bear hanging out  and chilling (‘passant attitude’ they call it) - then they changed it after a lot of legal wrangling, because they wanted to symbolise the city’s control of the local trees. 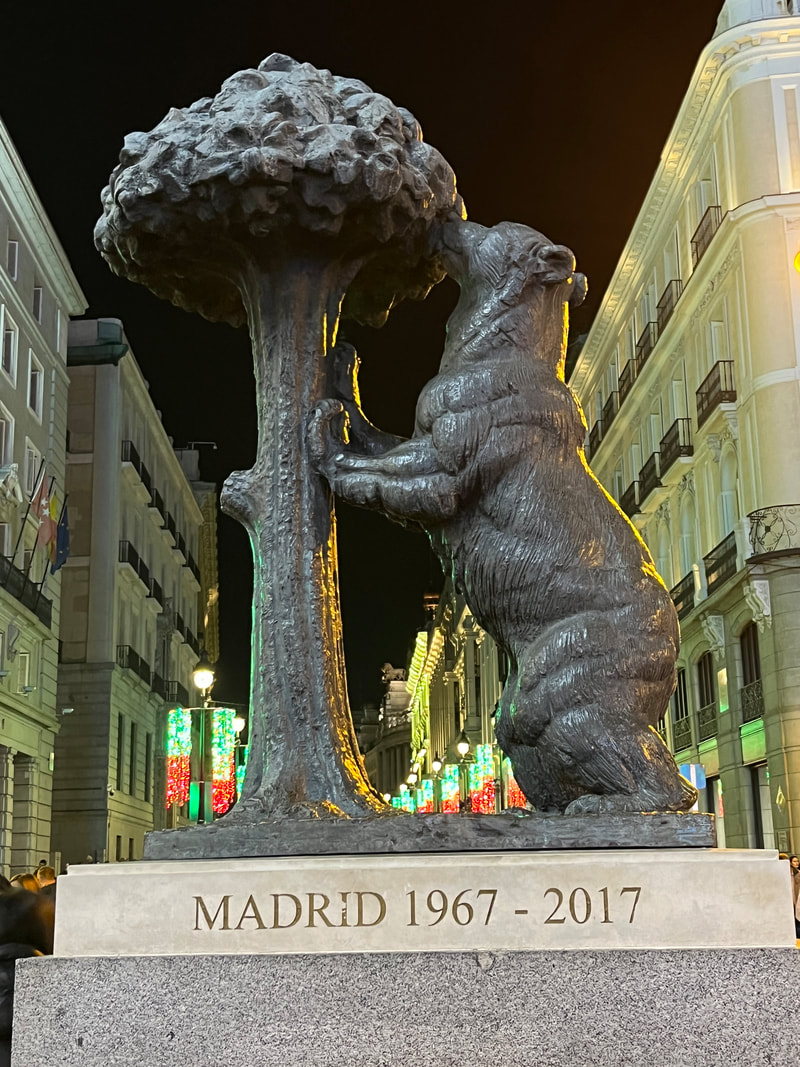 Eh? Local trees?
​Well - In the early 13th century, the church and the Madrid municipal council fought over who owned the right to use of the fodder in the local  fields and forests. The church was very powerful in the dark ages, and they said that all the fields and forests belonged to them (the church), and anyone who used them - to graze cattle in fields, or cut wood, or pick fruits, or whatever - would have to pay heavy fees to the church.
When the dark ages started to lift, and the power of the church waned, the local laity rebelled and said - Balls! How can everything belong to you? We are not going to pay any rent for using the fields and forests.
The issue went to the courts in 1222; and finally the judge said - let’s split it down the middle! … the fields and grass would belong to the clergymen, and people would have to pay to let cattle graze there and to cut grass and make hay and so on. But the forests would belong to the people - and the laity would control the timber and fruit picking and so on. The common man still had to pay tax - but this would go to the town council, rather than to the church.
This was a huge victory for the laity and the first example of the lowering power of the church. The townspeople wanted to celebrate this judgement - and so, the bear on the town’s logo went from being a bear chilling in the grass, to one picking fruits from a tree! This symbolised the lay people’s control over the trees and forests.
So now the symbol of Madrid is an image of a big bear standing with its paws on a strawberry tree. And before you point out that strawberries grow on bushes and not trees, let me explain that this is a tree whose fruits only look like strawberries - but aren’t! That’s why it is called the ‘Strawberry tree’ and not a ‘Strawberry bush’.  To be very precise - it is the ‘Arbutus unedo’ -  an evergreen shrub or small tree in the flowering plant family Ericaceae native to the Mediterranean region and western Europe.
mumbai to madrid
real madrid
one man goes to spain