If Cooper’s bay had been great - then Gold harbour was even better!
​WOOHOO! 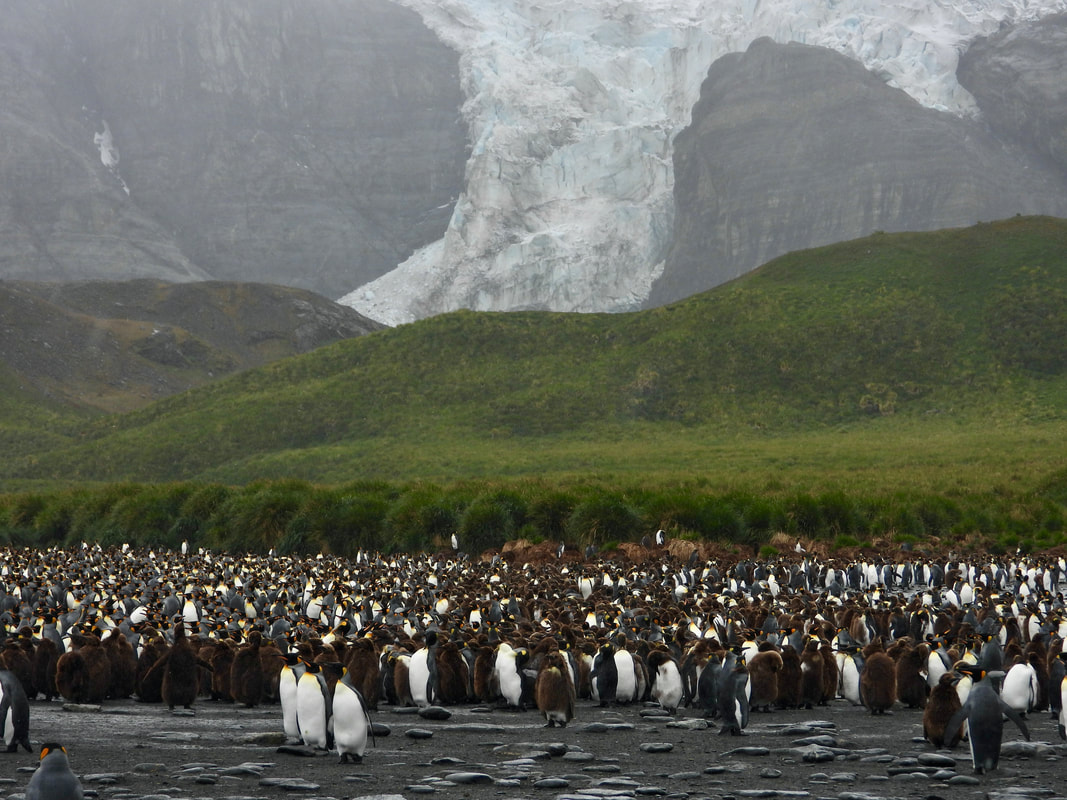 This morning we awoke to stunning views of Gold Harbour. From the ship we could visibly see the large colony of king penguins set against a magnificent amphitheatre of hanging glaciers most notably, the Bertrab Glacier. 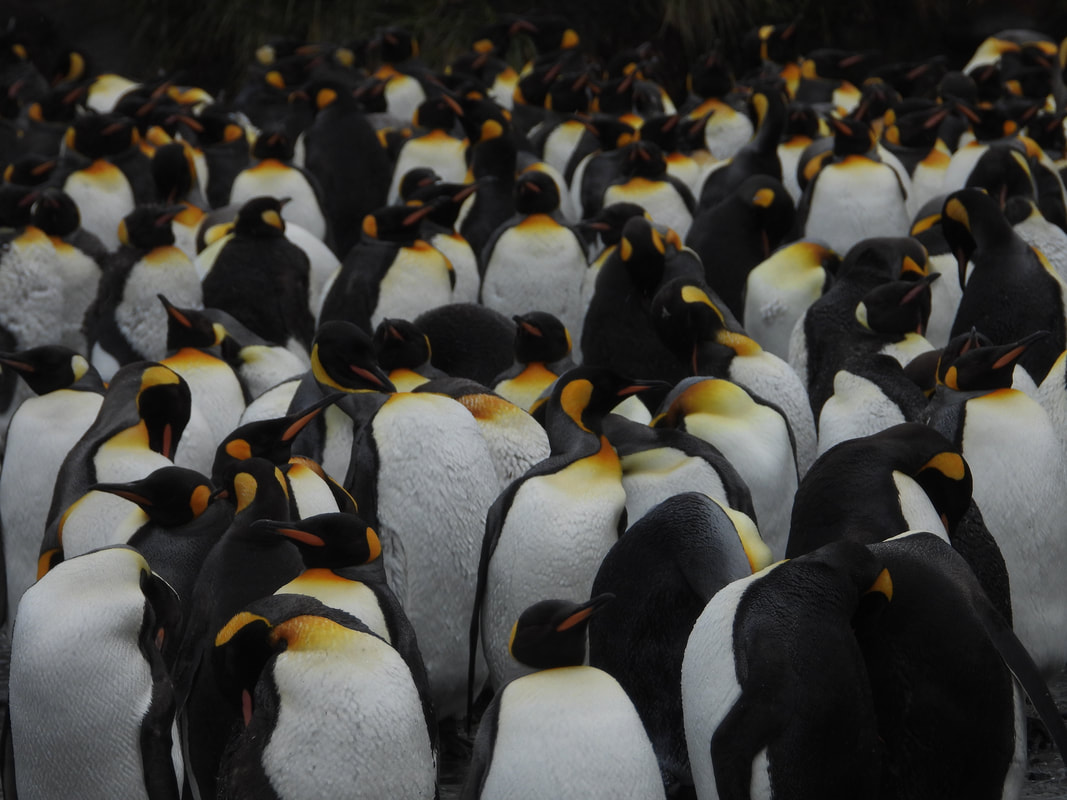 Gold harbour was a wonderful place!  An incredible experience of being among so much wildlife. The sights, sounds and smells gave us a real sense of life in this very unique place. Fur seals and their pups lay hidden among the surrounding tussac grass with the occasional gentoo penguin making an appearance. Elephant seals put on quite the show with large juvenile males jousting on all sides. We also witnessed nature in the raw as southern giant petrels and brown skuas battled over a dead fur seal pup. 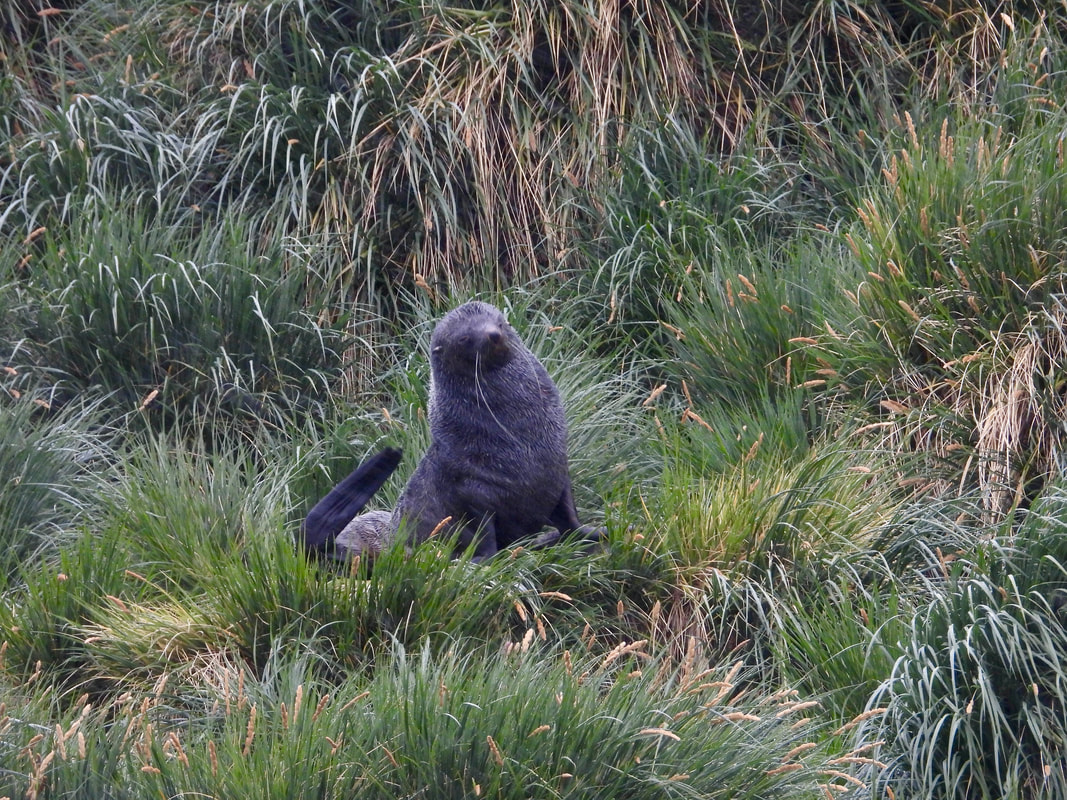 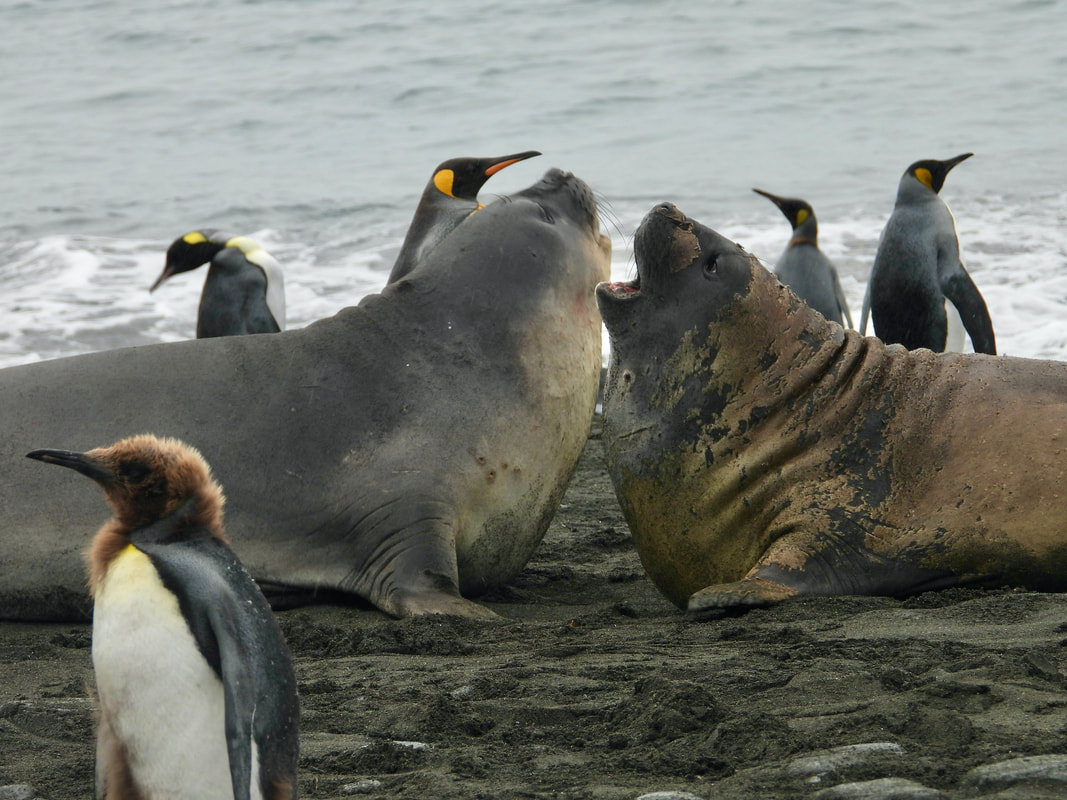 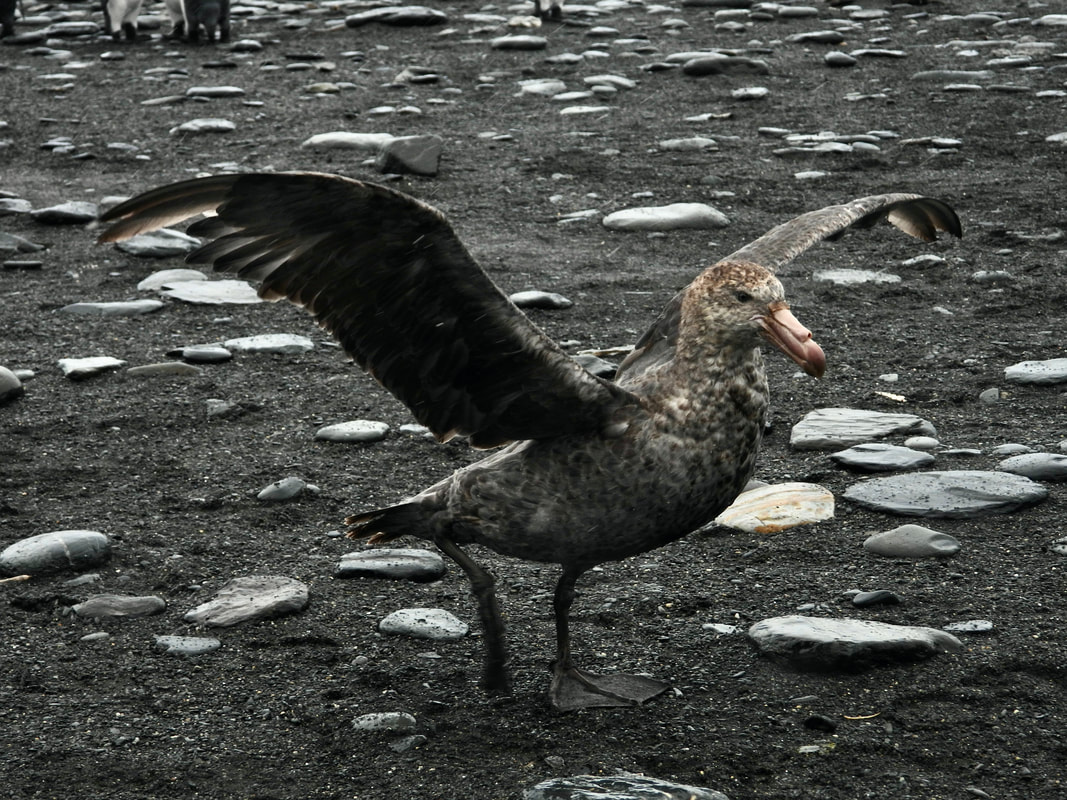 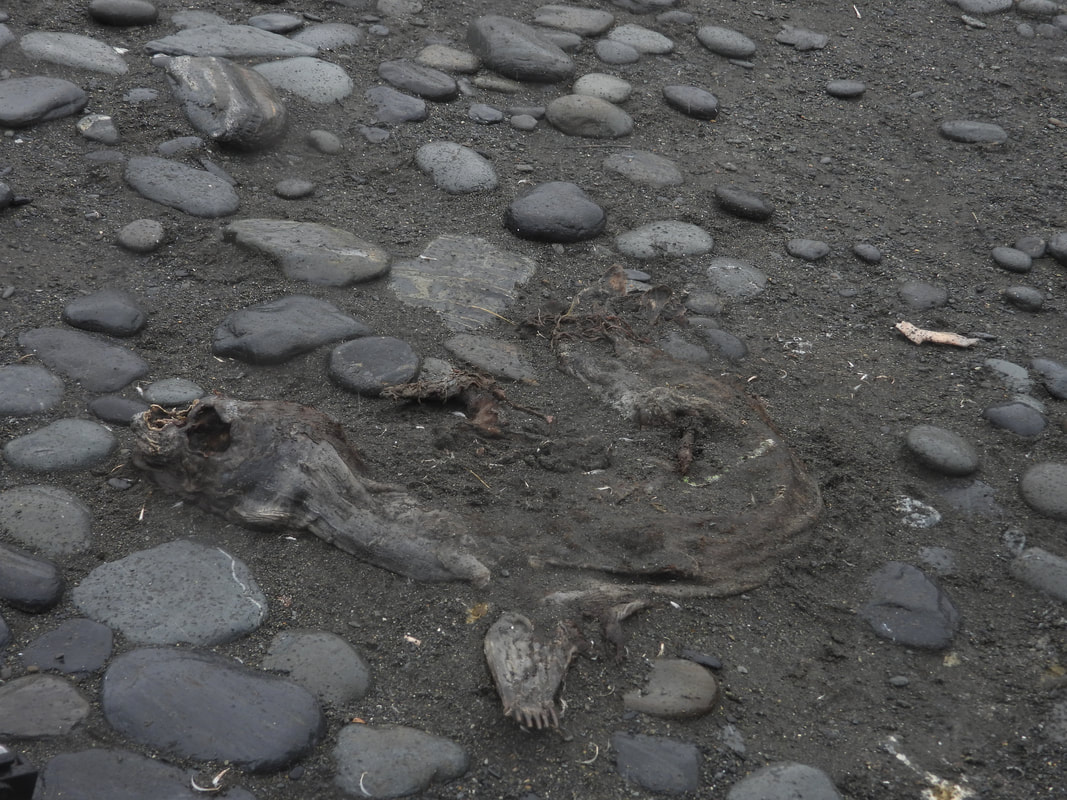 But the stars of the show were the striking king penguins and their brown, wooly chicks. Zodiac cruising allowed us to see the extent of the colony leading to the glacier as well as providing a wonderful vantage point to see penguins and seals entering and exiting the water. 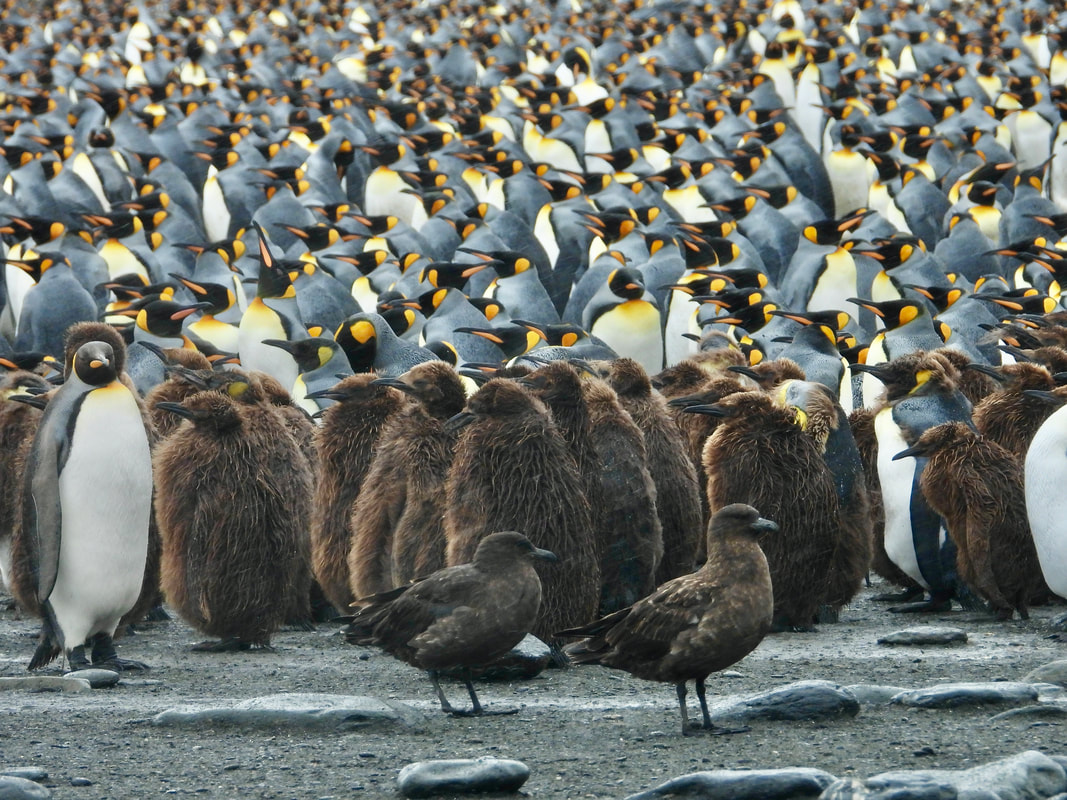 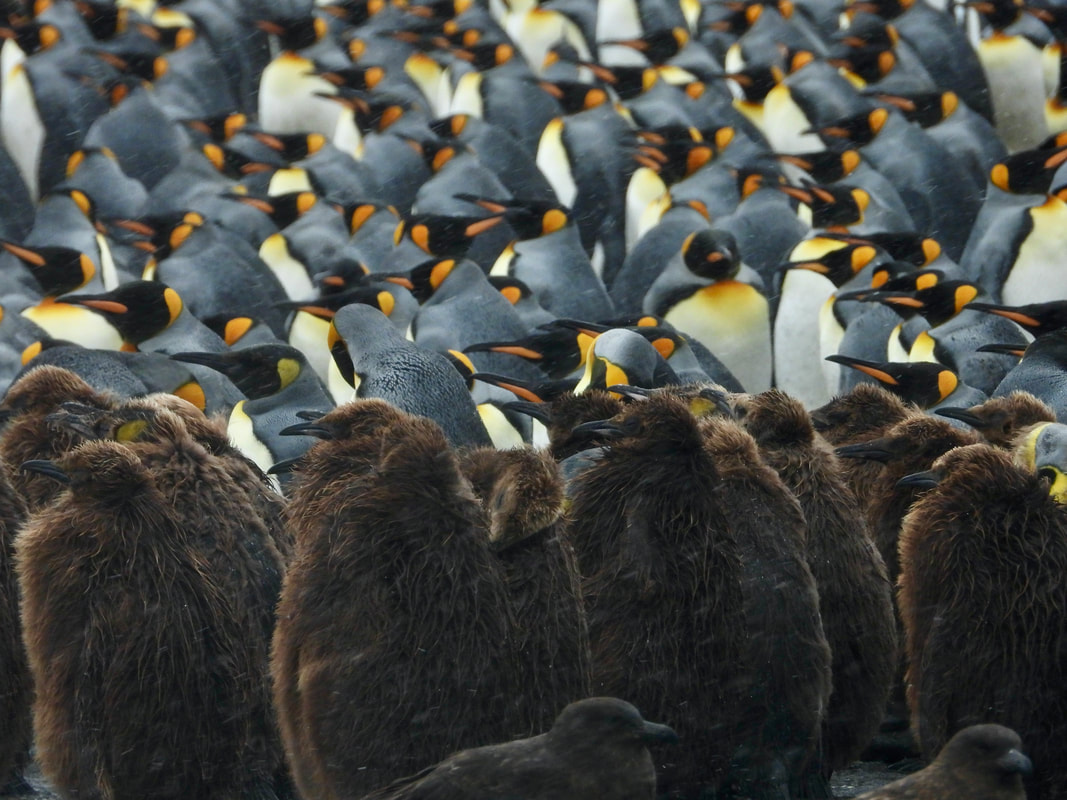 Just as we got off the Zodiac - we were treated to an interesting sight. The expedition staff had made a big pile of their equipment when they landed - and an Elephant seal promptly thought that those rucksacks and duffel bags looked a lot more comfortable than lying on the cold sands and rocks of the beach; and had climbed on top of the pile and used it as comfortable pillow and mattress!
You might have heard the joke  - Q: Where does a thousand-pound gorilla sleep? A: Wherever it wants to!
The same logic applies to a one-tonne elephant seal with long yellow teeth and a bad case of  halitosis. If you went near it, it would open its mouth wide and emit a loud roar and a huge puff of steam - and everyone would politely step back and say ‘You know what…I don’t really need that equipment right now…’ 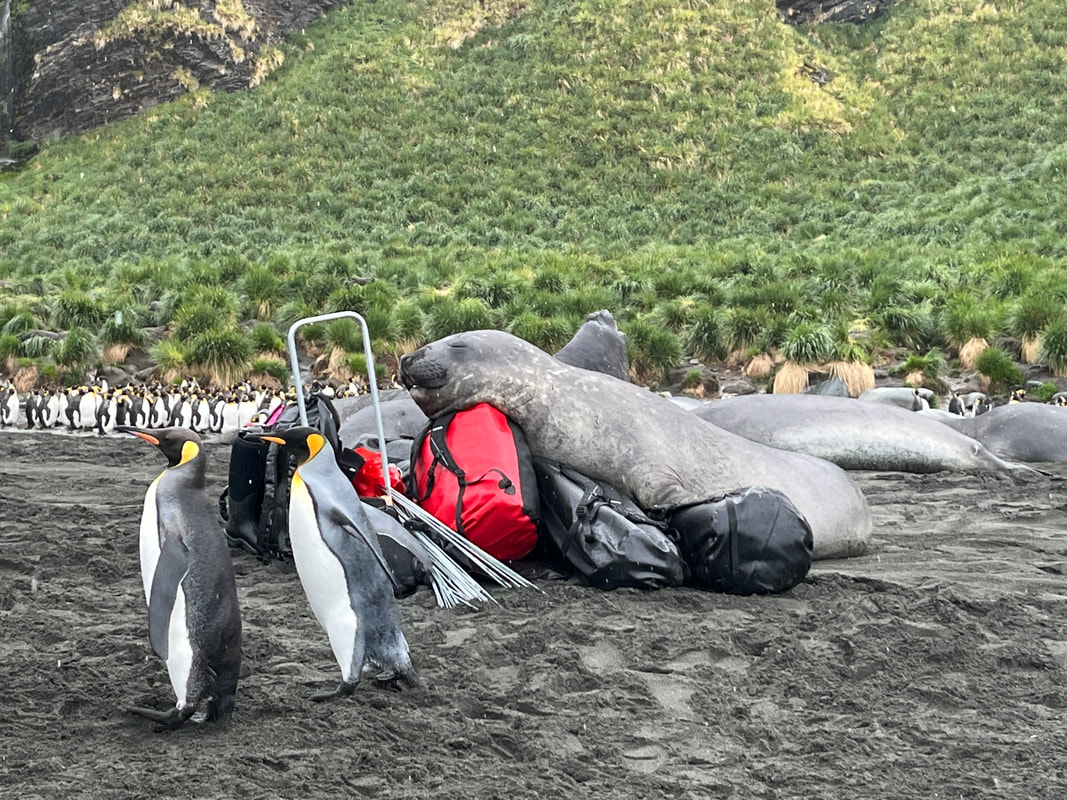 These Elephant seals are really magnificent! They are the largest extant carnivores extant today! Luckily for us, they only eat fish and squid and krill and not human tourists! They were hunted to the brink of extinction for oil by the end of the 19th century, but their numbers have since recovered. 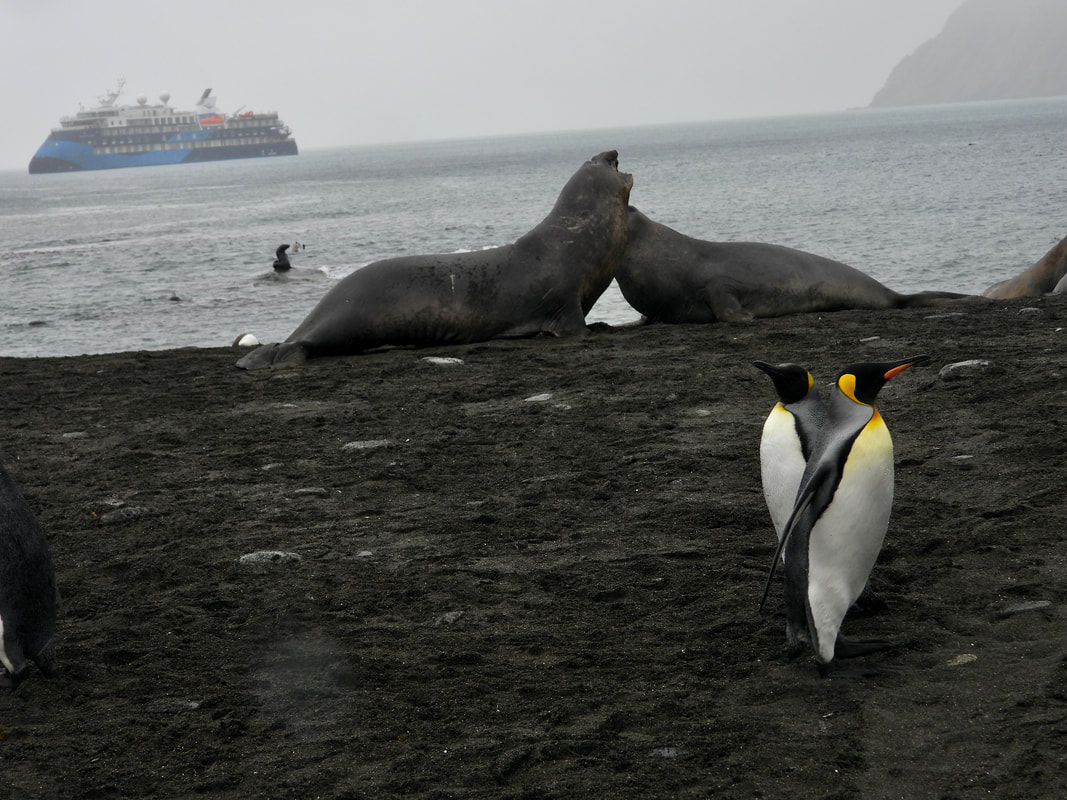 They are called ‘Elephants’ not just because of their jumbo size - but from the large proboscis of the adult male (bull), reminiscent of an elephant's trunk. The bull's proboscis is used in producing extraordinarily loud roaring noises, especially during the mating season. 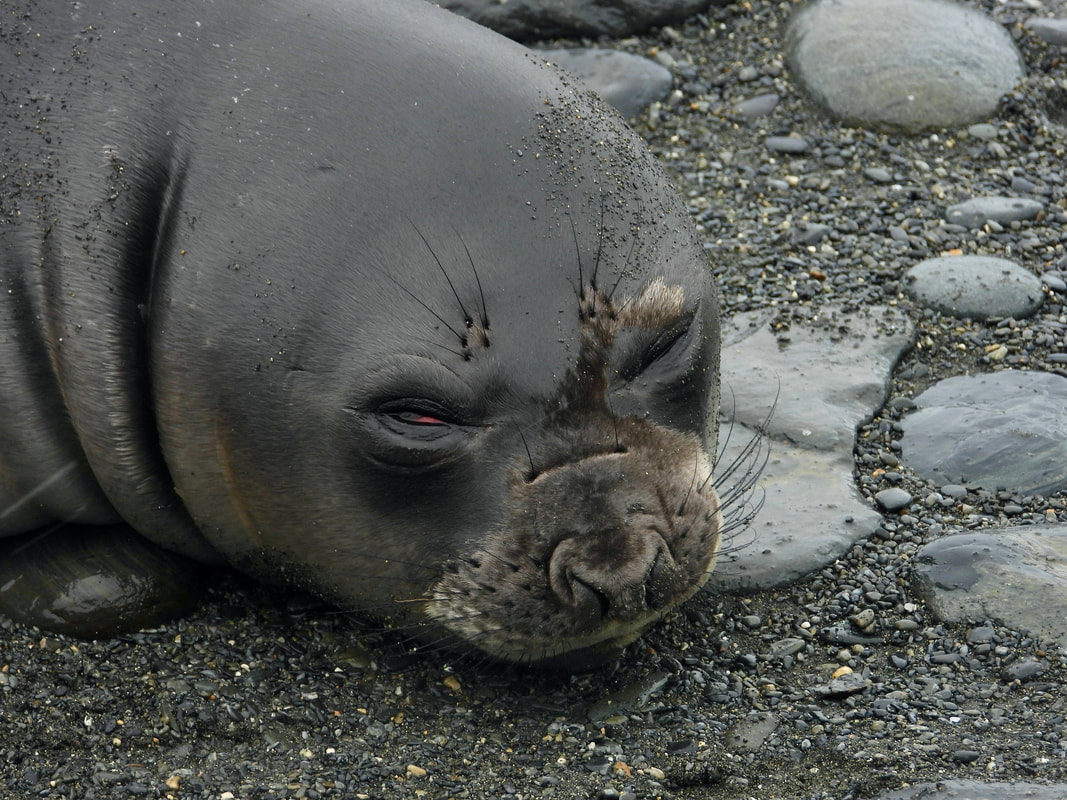 There were so many penguins here too!

There were some Gentoo penguins, but the vast majority seemed to be these beautiful King penguins. There were there in their thousands! Wow! 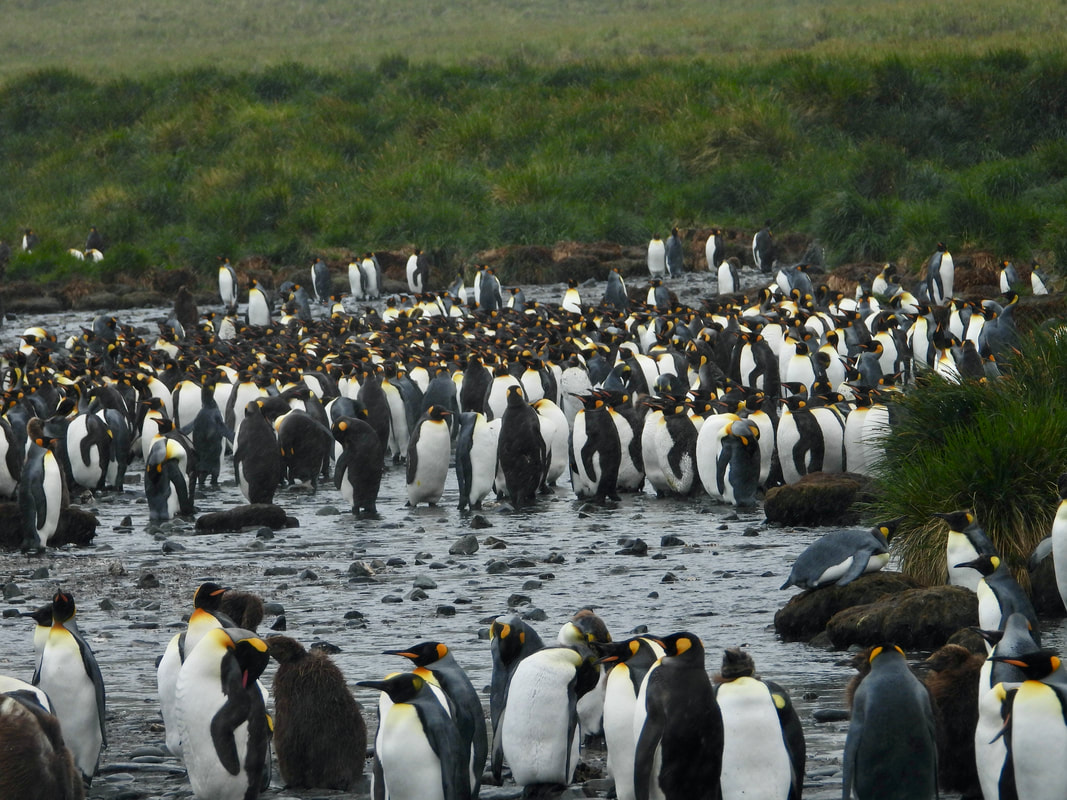 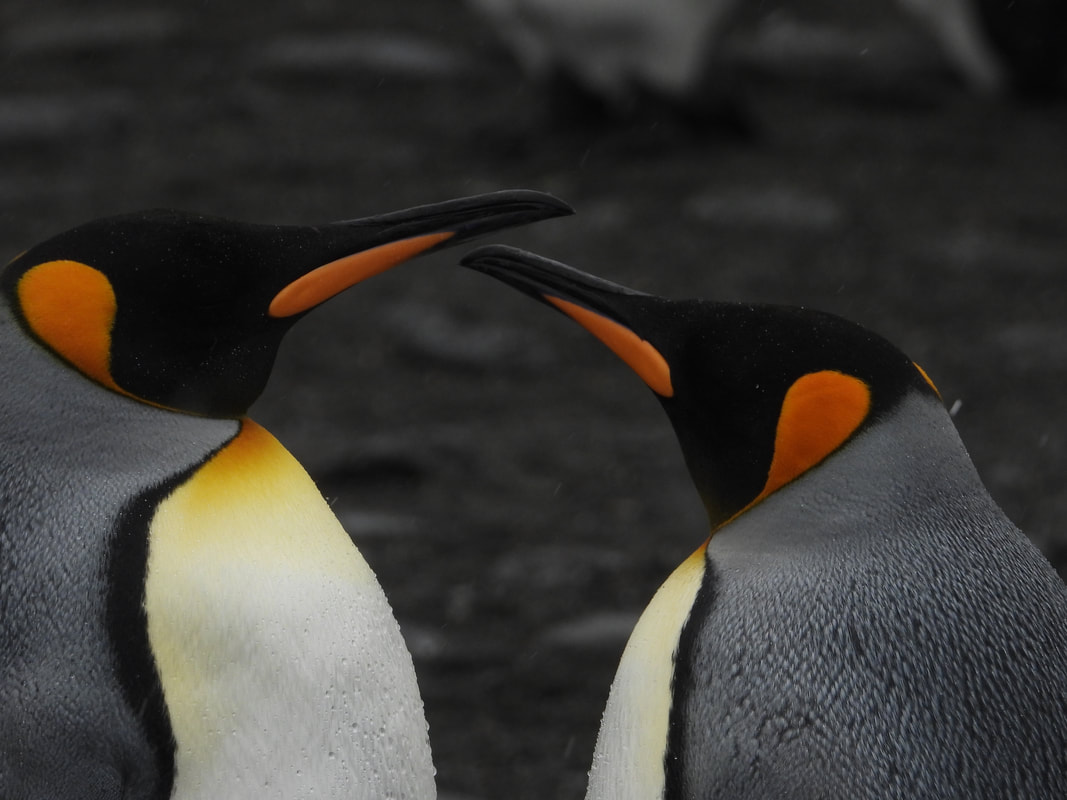 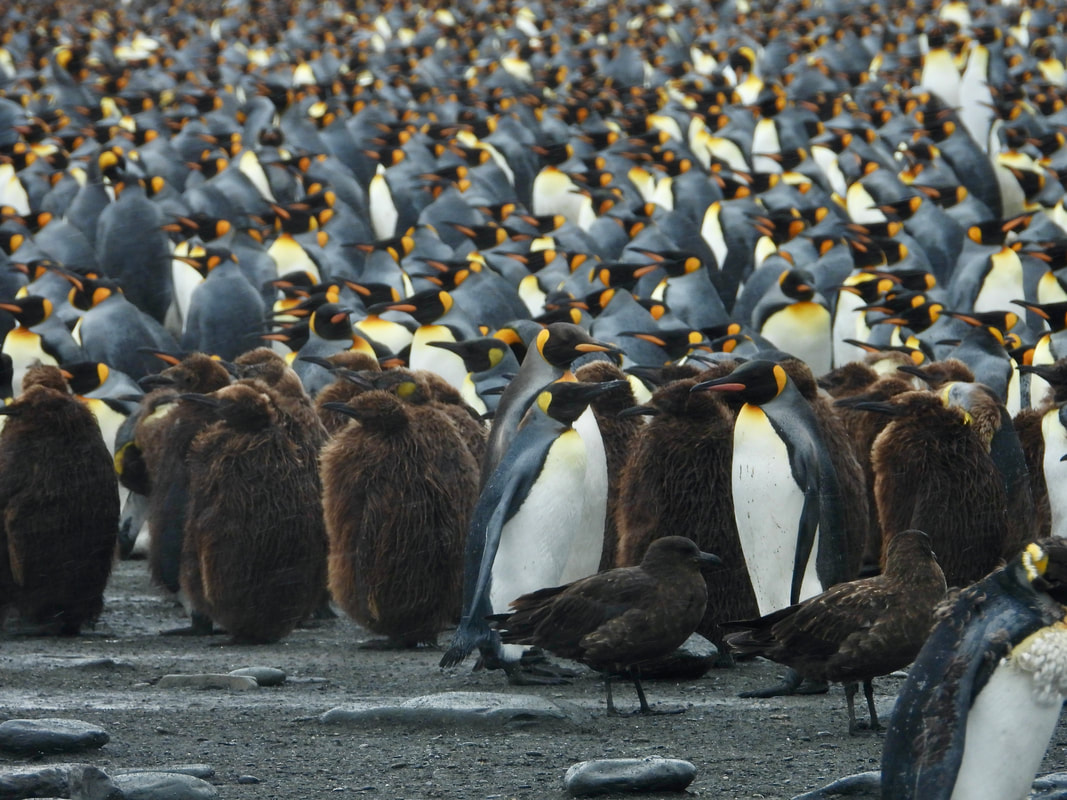 Talking about breeding - we had one more proposal on the island! This time between a Limey guy and an Aussie girl. 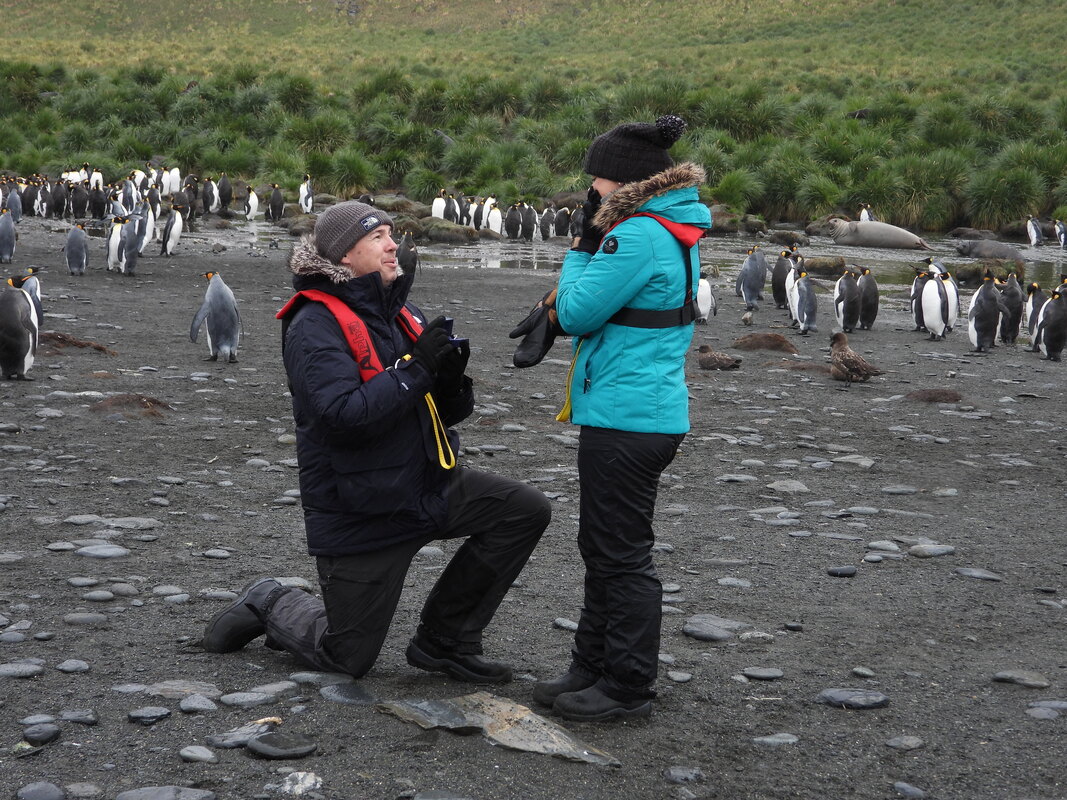 The Captain pulled (raised? Upped?)  anchor and we began to make our way to our scheduled afternoon visit to St. Andrews Bay. 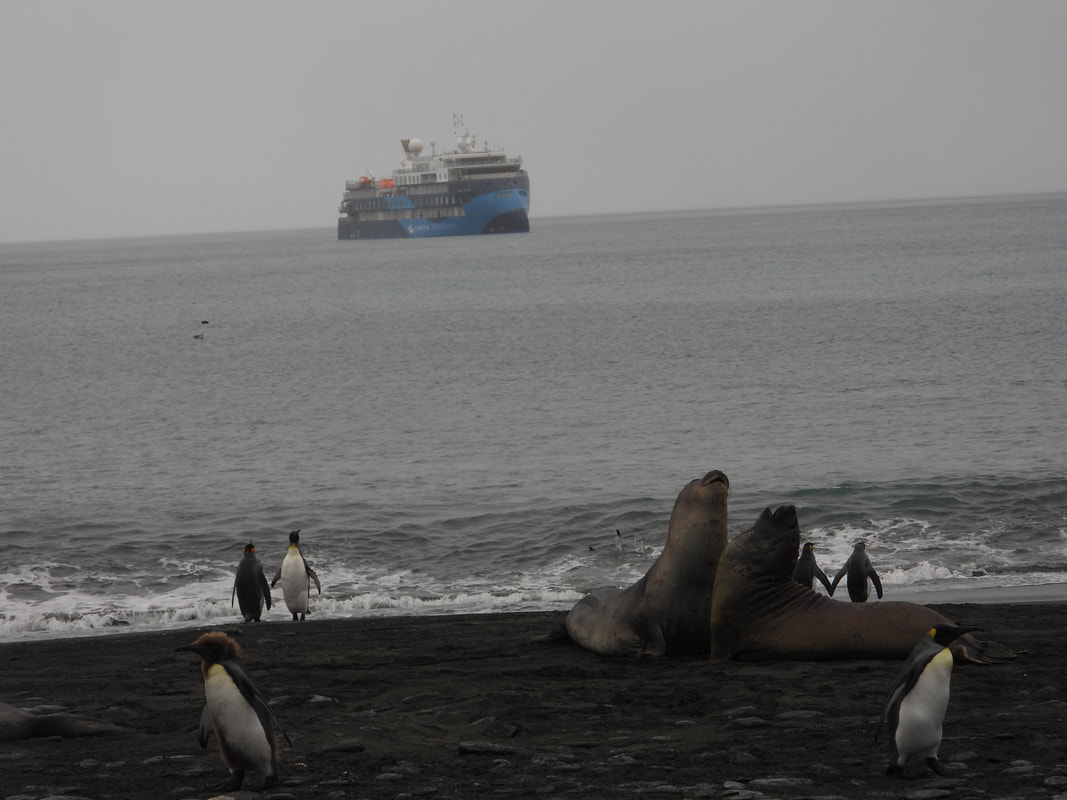 King penguins form huge breeding colonies, and the one at St Andrews Bay has over 150,000 birds and is  probably the largest in the world!
We were all excited to see it!
But…
Ah - you are ahead of me!


Shelli came on the PA ‘Good afternoon, everyone - Good afternoon.’  It was the usual thing -  we could not make a landing as there were winds gusting to 50 knots, crazy waves, yadayadayada.
I didn’t mind it personally - my heart was full after the sightings of the morning. But the rest of passengers started mumbling and rumbling.
But all was not lost as we were unexpectedly treated to a pair of Humpback whales..
​WHALES! WOOHOO! HUMPBACK WHALES! WOOHOO! 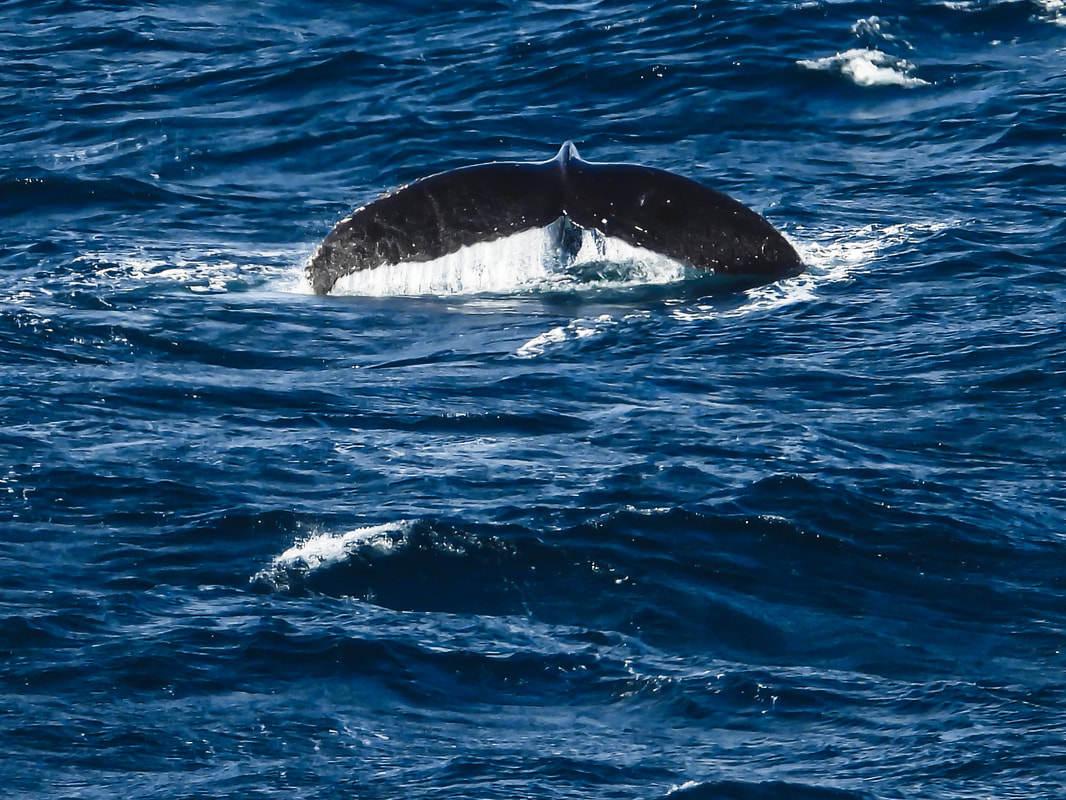 The PA system would announce  - ‘THAR SHE BLOWS! WHALES TO STARBOARD, ME HEARTIES!’ and we would all rush to the deck and wonder which side is starboard! 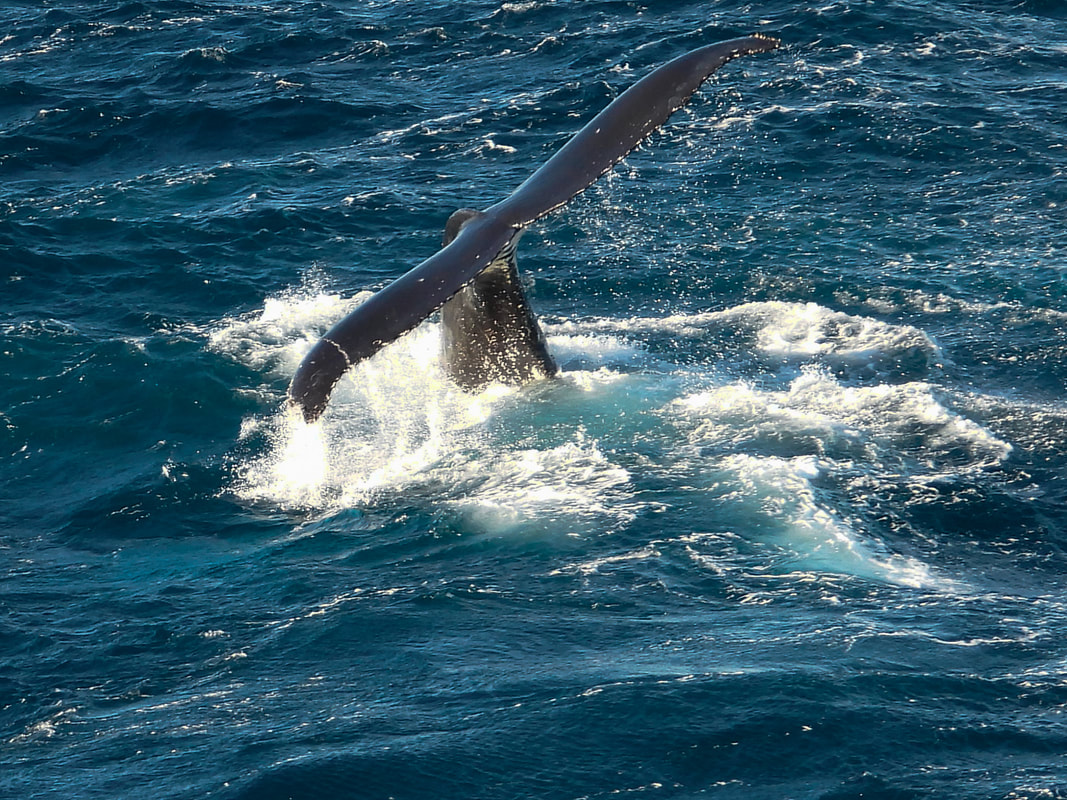 There was a whole pod of seals following the whales around, like a bunch of acolytes around a guru - probably the whales stirred up a lot of krill or squid and these seals found it easy to get a good meal. Or perhaps they worshipped this great Leviathan and followed it around in devotion! 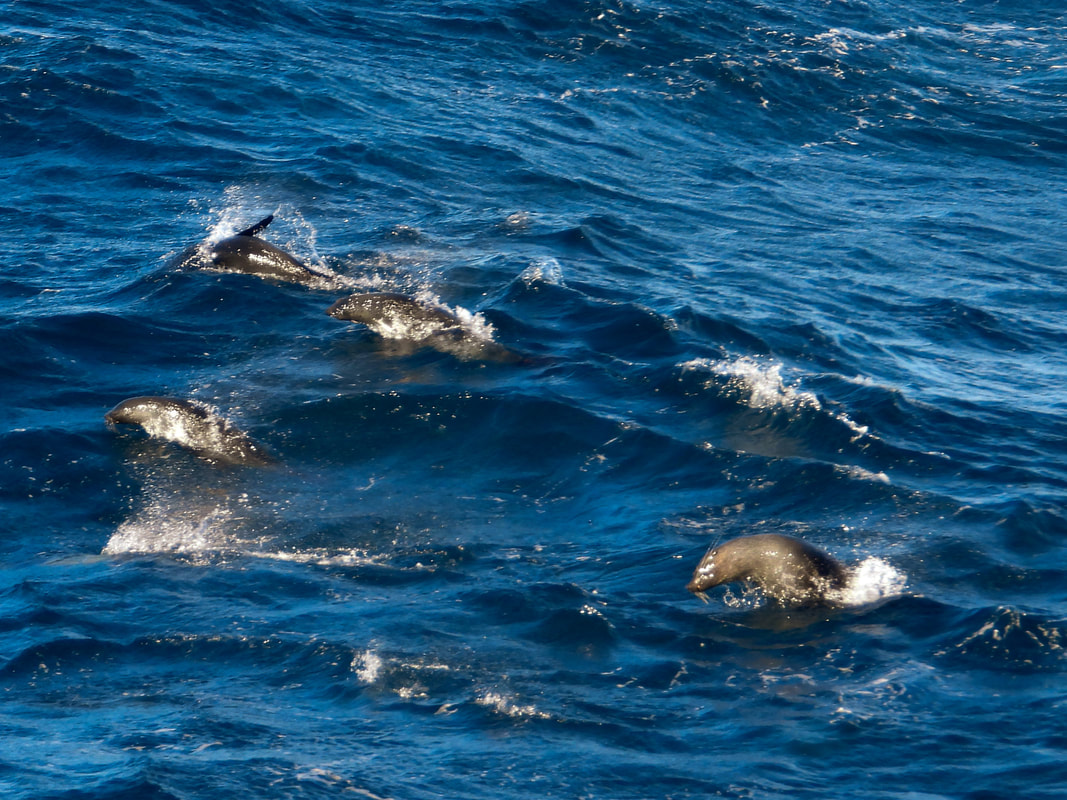