This is it! It’s EM-BARK-ATION DAY!  WOOF WOOF!

This is what the whole trip has been leading up to! Actually getting on the damn boat and sailing away to see Antarctica! 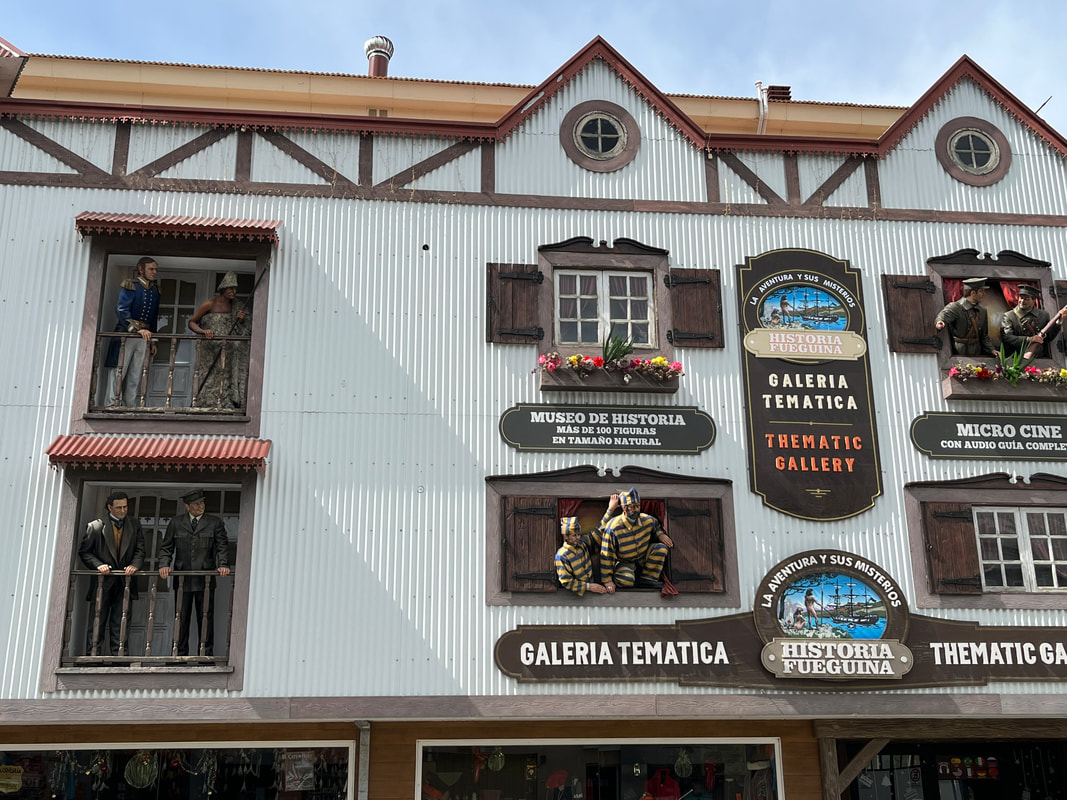 I had been on a cruise before, and knew that embarkation day is pretty boring on a ship. They don’t assign you cabins immediately so everyone is milling around in the common area, the bar is not open and all you do is sit around and get bored. There is no point in boarding the ship early. And it would be waste of a precious day as well! So I booked a slot on the final bus at 3.45 PM. That would give me the whole day to explore Ushuaia.

But what should I do on the last day?
Raj or Joby had discovered some ‘tea point’ for a nice view. I took a taxi to the ‘tea point’ that  Joby had Whatsapped about - I showed the address to a taxi and he nodded his head and took me there. There I discovered that the ‘tea point’ was  actually a ‘tea room’ - a small but fancy  restaurant called  ‘La Cabana Casa de Te’. 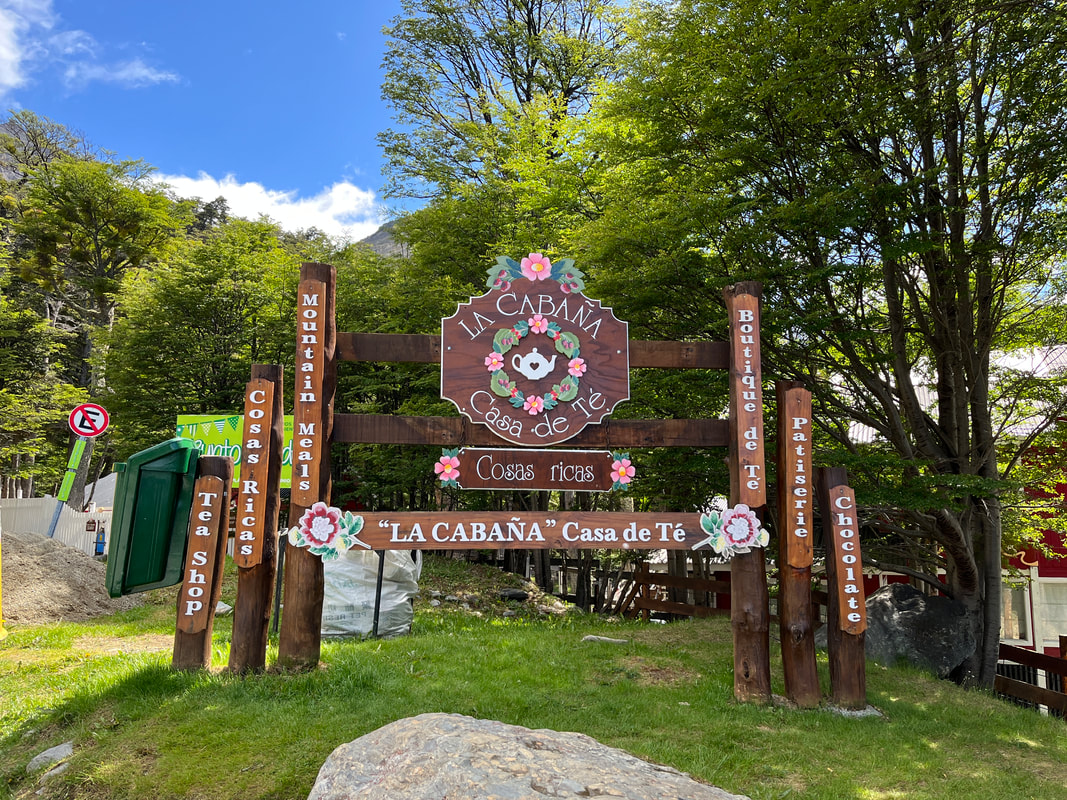 I shrugged my shoulders and went in and had a pretty nice tea and cake - but I wondered where was the fantastic view that Joby had talked about? This joint was quite nice - but there was no view whatsoever. 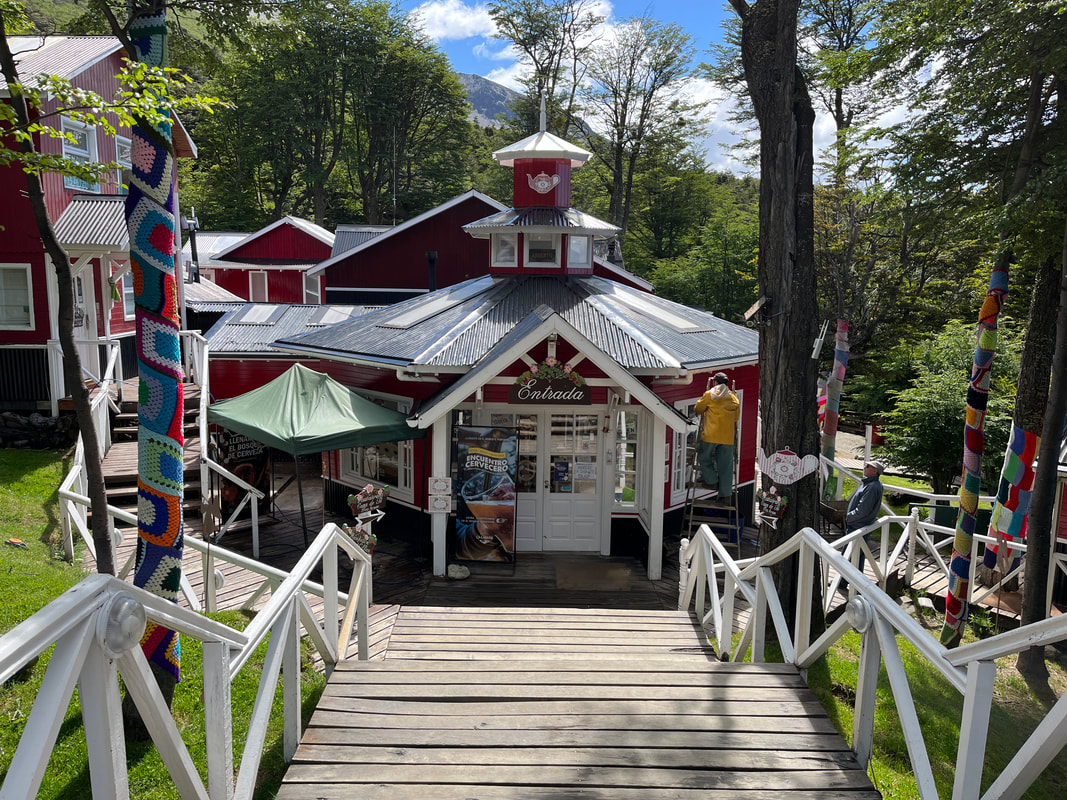 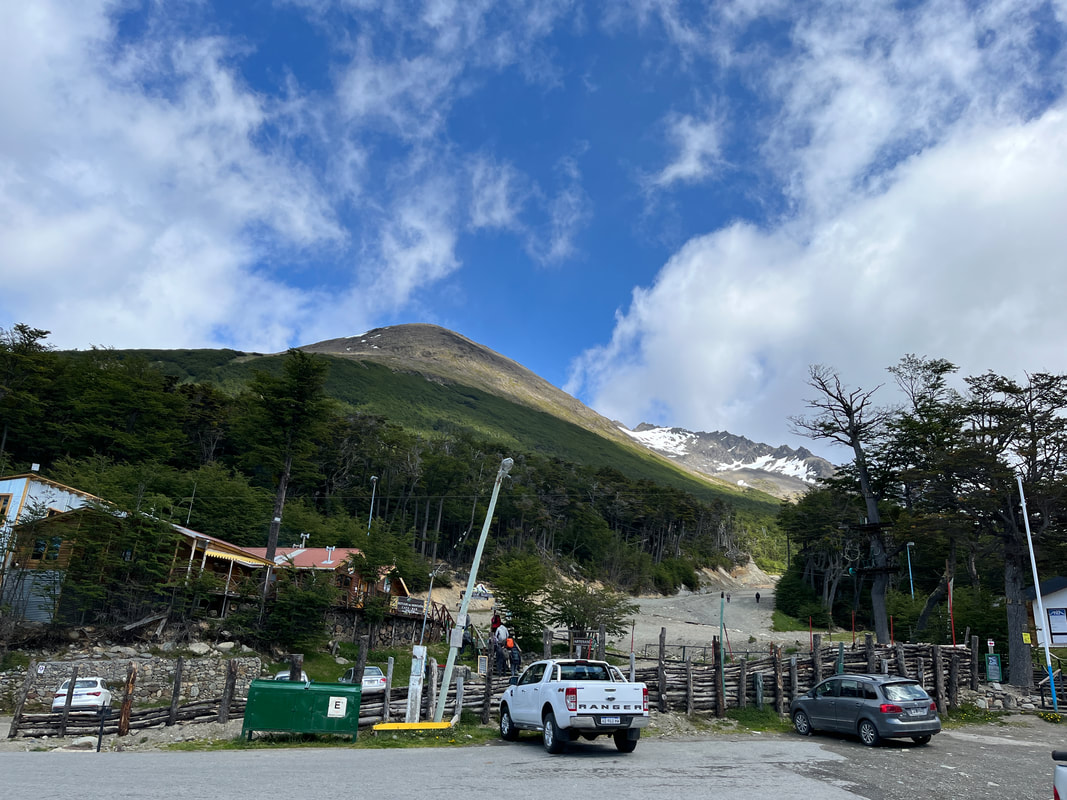 I came out of the Tea joint and looked up - and there it was! A mountain! The Martial mountain! Wow! What a huge mountain!
And you have to climb up that huge mountain to see the view. Hmm. 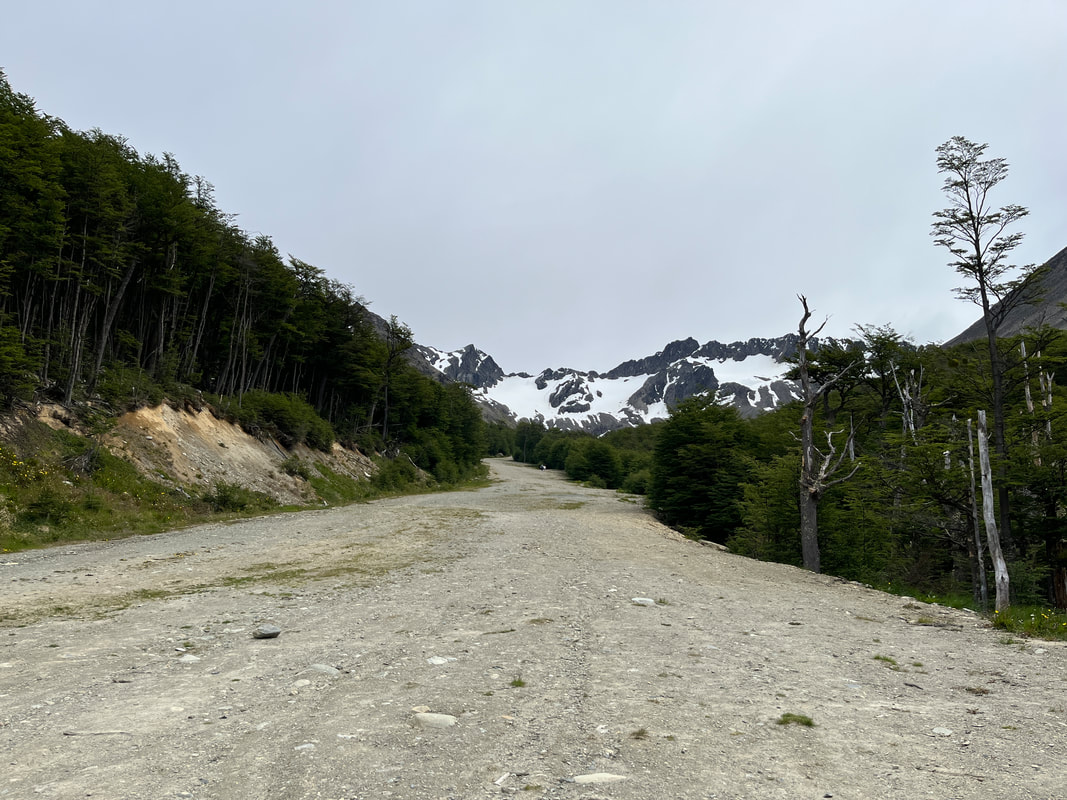 had started the day with no thoughts about climbing anything but the gang-plank to the ship - but let it never be said that Ketan ever backed away from adventure! Excelsior! I bravely shouldered my rather heavy backpack full of electronics and breakables, and started off. 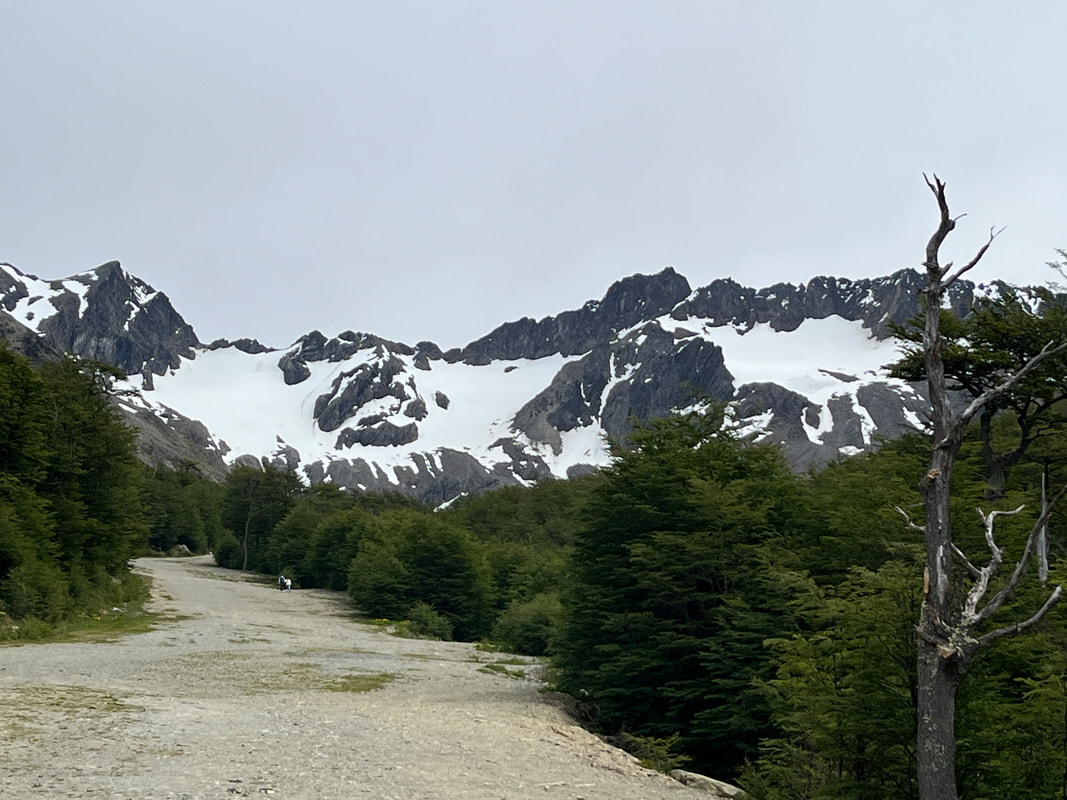 Interestingly, this glacier is not named for any war or battle or ‘martial’ exploit. It is actually named after a guy called ‘Martial’! Martial Glacier was named in honor of explorer Luis Fernando Martial, leader of the French scientific expedition which arrived in 1883. In fact, the entire mountain range is named after him - the Martial mountains. 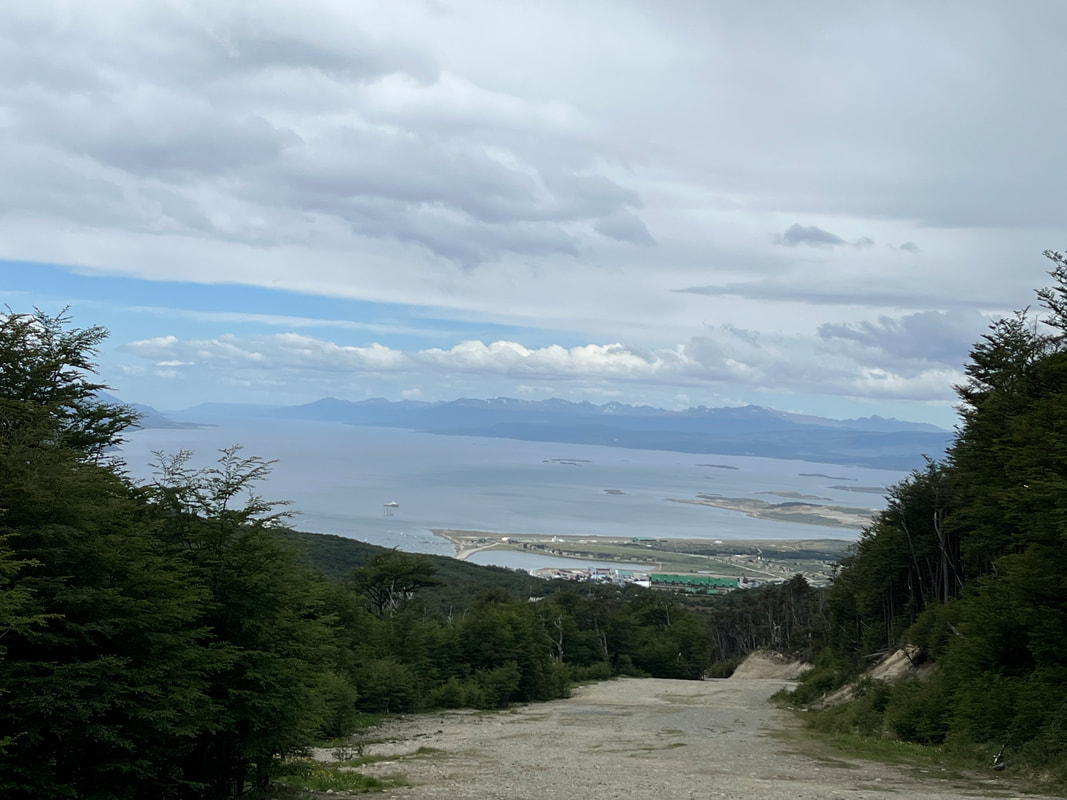 I Went huffing and puffing up the fairly steep slope and looked at all the happy people coming down. There were all types of people - young, old, fit, fat, men, women, children…and all of them had done the climb and come back!
I stopped a couple of them and asked how much further. It was much further, they admitted - and a bit steep…but you will be happy once you get there! They were very kind and encouraging - don’t give up! You might be old and fat and unfit and with one foot in the grave - but persevere and you shall achieve it! And the fat women and geriatrics and cripples and tiny children - who had all done the trek and were coming back down - nodded encouragingly. Even you can do it! 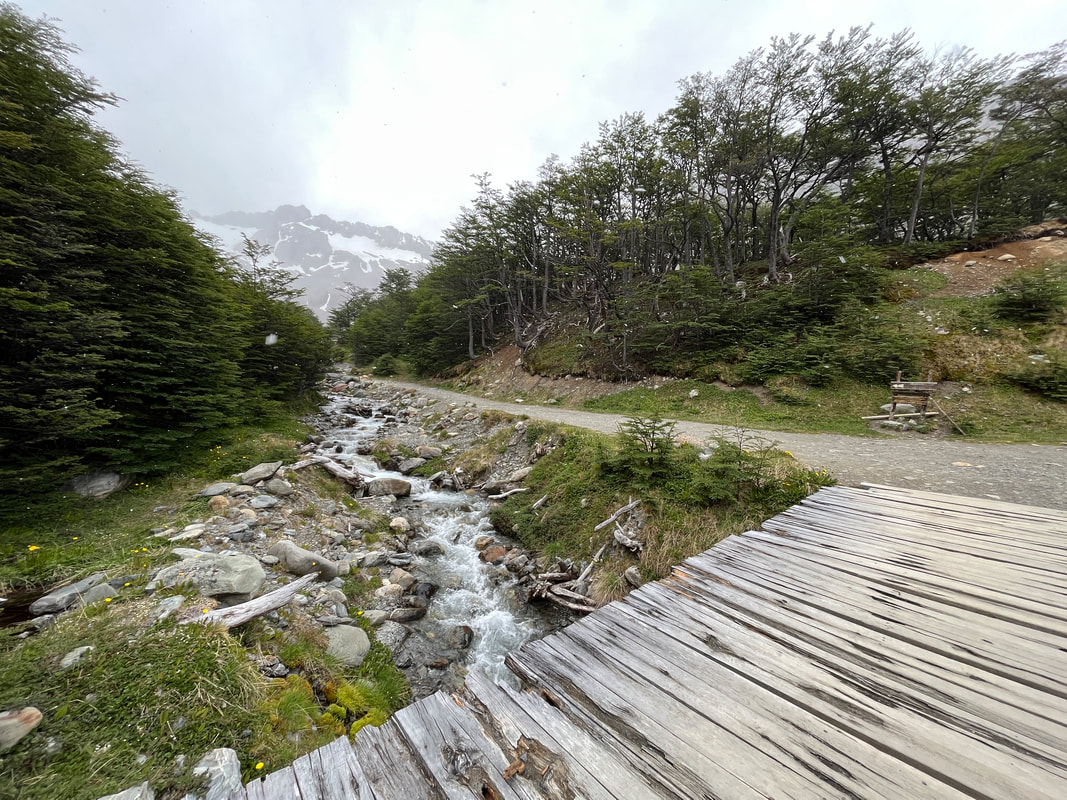 This is a popular skiing destination in the winter and they have a ski lift and all - but it is probably decommissioned in the summer. 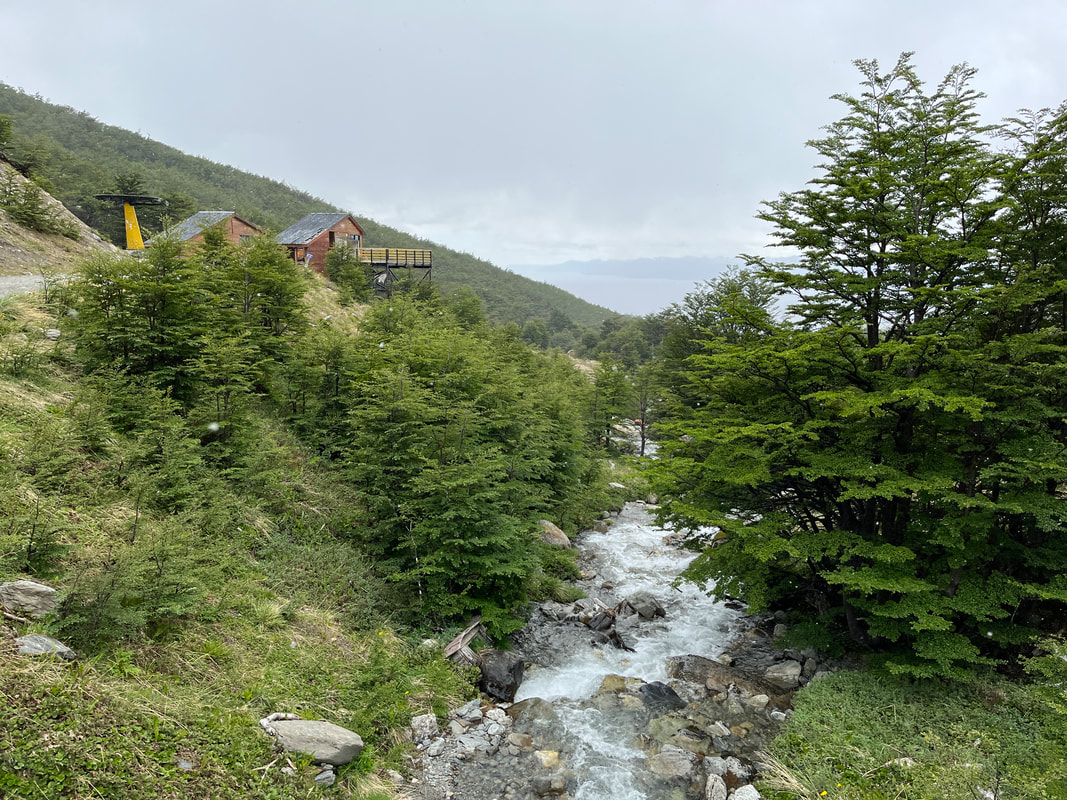 I got exactly half-way there and would have completed the trek too -  but then it  started raining and it started snowing! 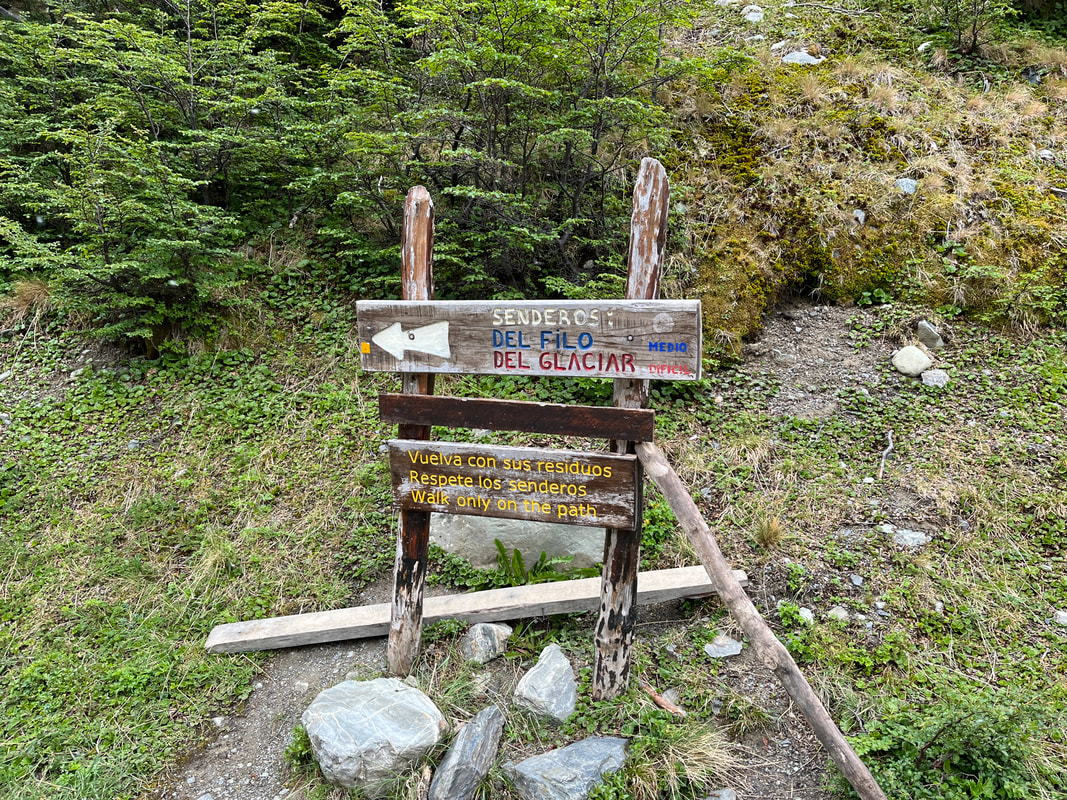 WTF! It was so hot yesterday that I could not sleep because of the heat! Now it was frikkin’ snowing! 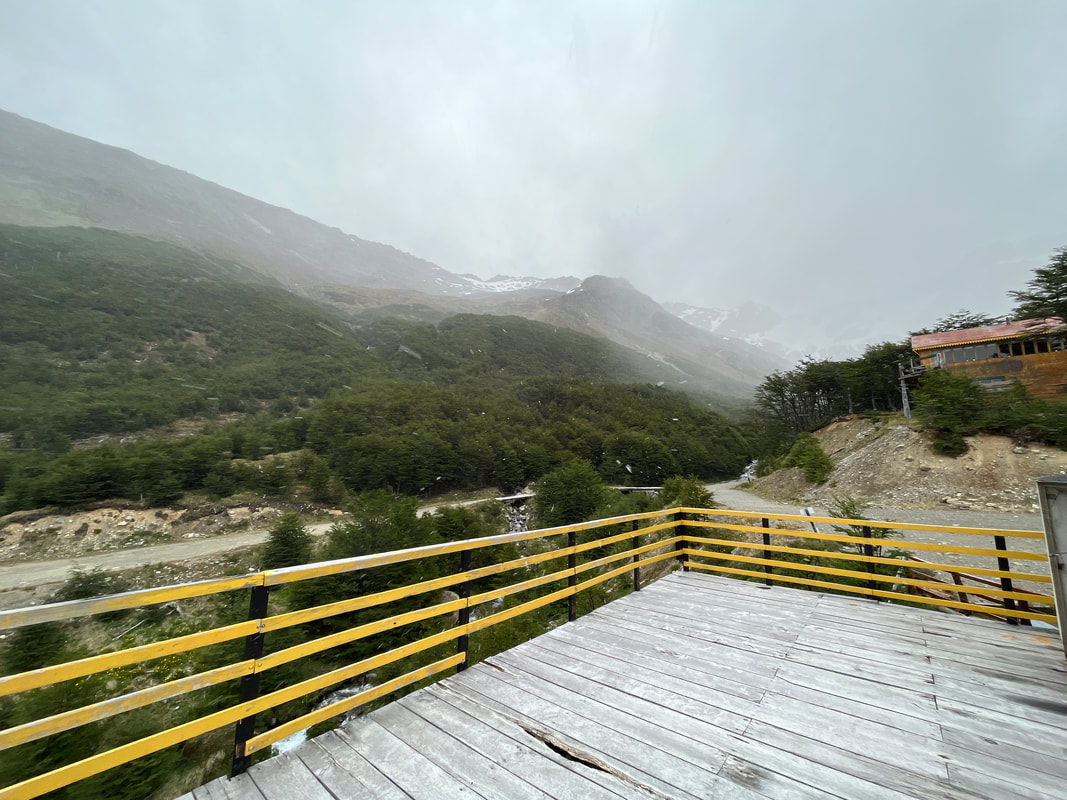 I was a bit worried about getting sick or missing the boat. If I develop a fever now after getting wet, it would be the cruellest cut of all! And if I was not able to find a taxi to get back - I would miss the bus - literally! That would be just stupid. And what if I got lost on the trail and was buried in snow and died of cold and my nose got frost-bitten? 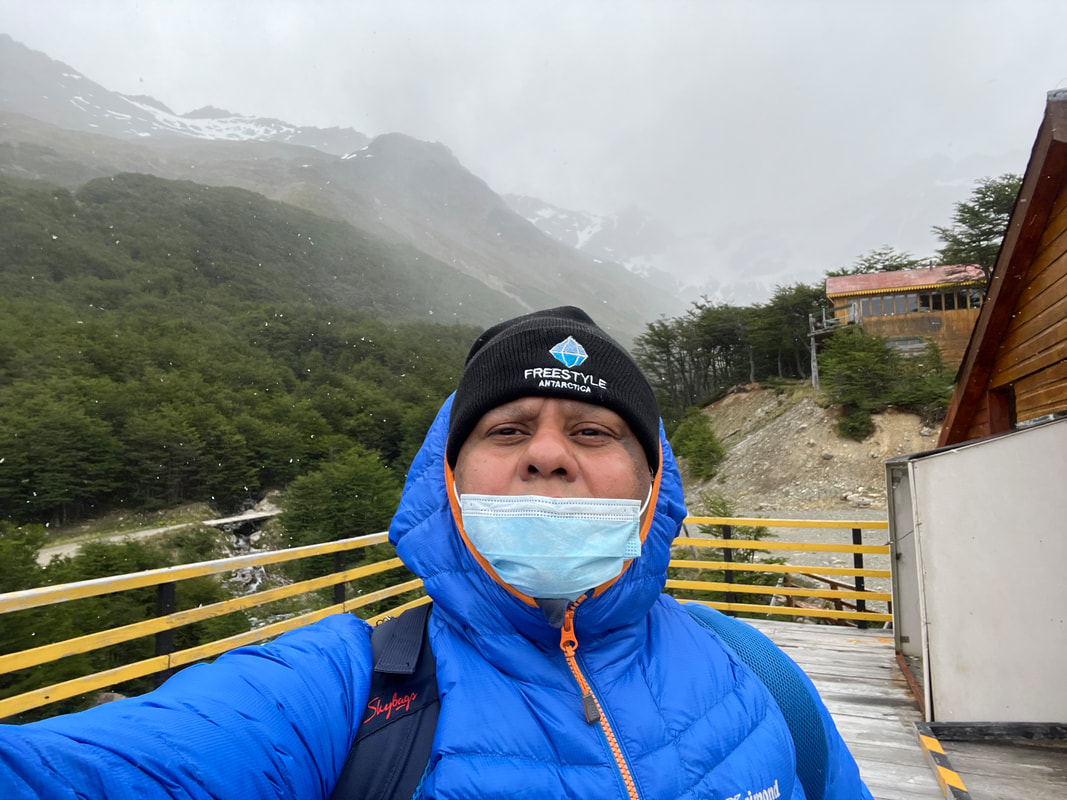 So I turned back.
It was a great pity - I would have loved to have completed that trek. 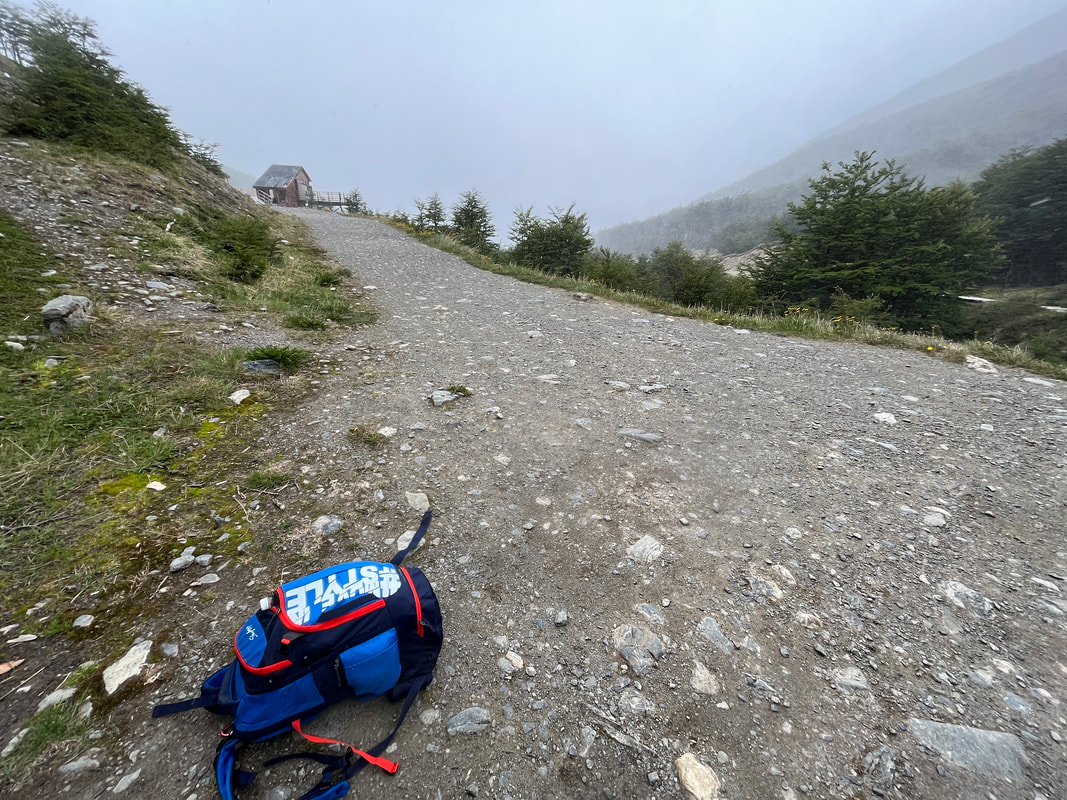 When I got back down to the trail head, I was totally soaked - with rain on the outside, and with sweat  on the inside!  I was happy to find a nice warm hotel at the start of the trail and went inside and basked in the warm heated interior! What a joy! I removed my jacket and pullover and waited for  my inner shirt to dry out, and had nice warm spiced wine  ‘vino caliente’, and a nice burger. It was a very nice place with friendly service staff. I had a leisurely lunch, dried out my shirt and took a taxi back to the waterfront, and caught the bus to ferry me to the ship. 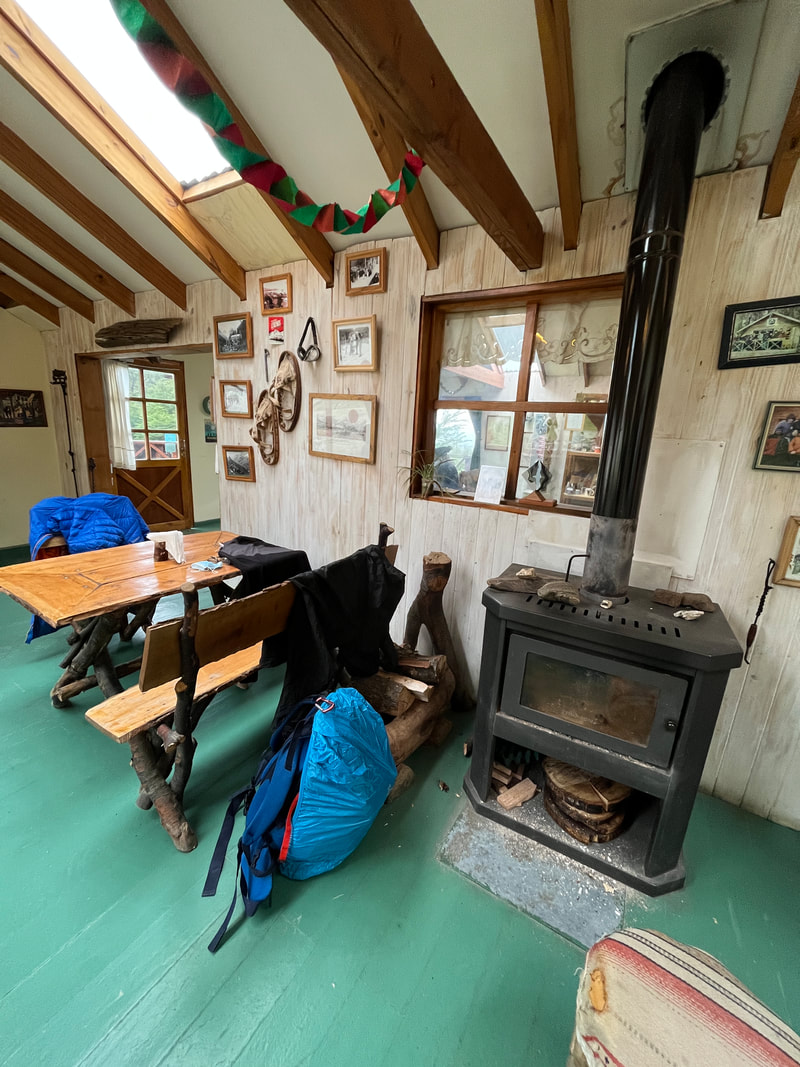 I met another solo Indian guy on the bus! A smart and handsome guy called Piyush. I was really gobsmacked. After having being the only Indian around for miles and miles for a month in Spain and Argentina, it felt so strange to be meeting so many other Indians and speaking in Hindi. I had definitely not expected this! 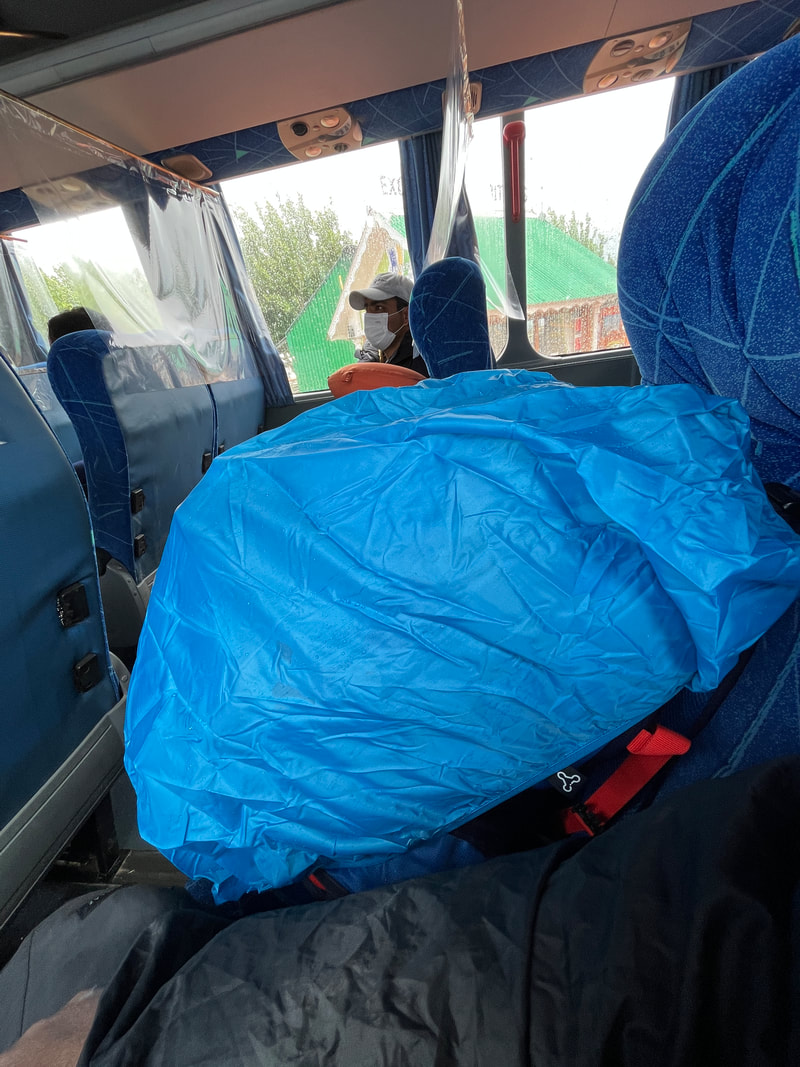 The bus took us to the ship - and there we were…actually boarding the Ocean Victory!
​What a rush! 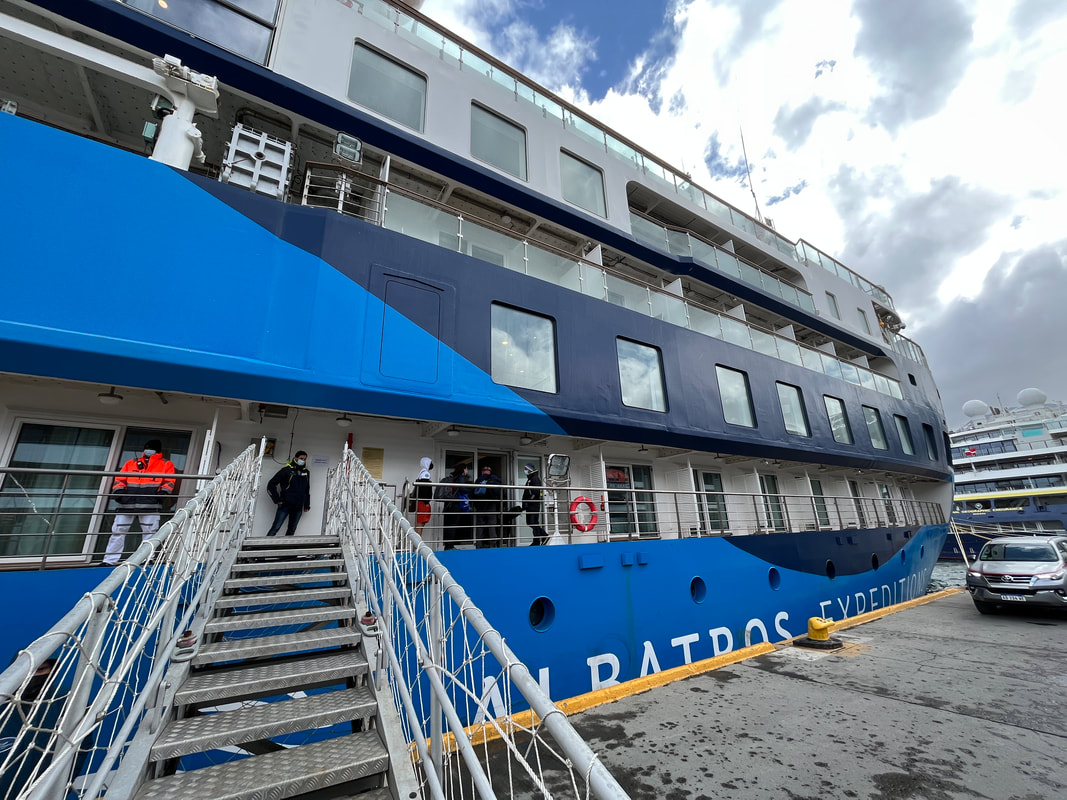 The boarding was extremely smooth - the reception desk greeted us prettily, took our passports and gave us our room key and an identity card. I was most relieved to see the green circle stuck on the card - because that indicated that I had an unlimited liquor pass!
WOOHOO! 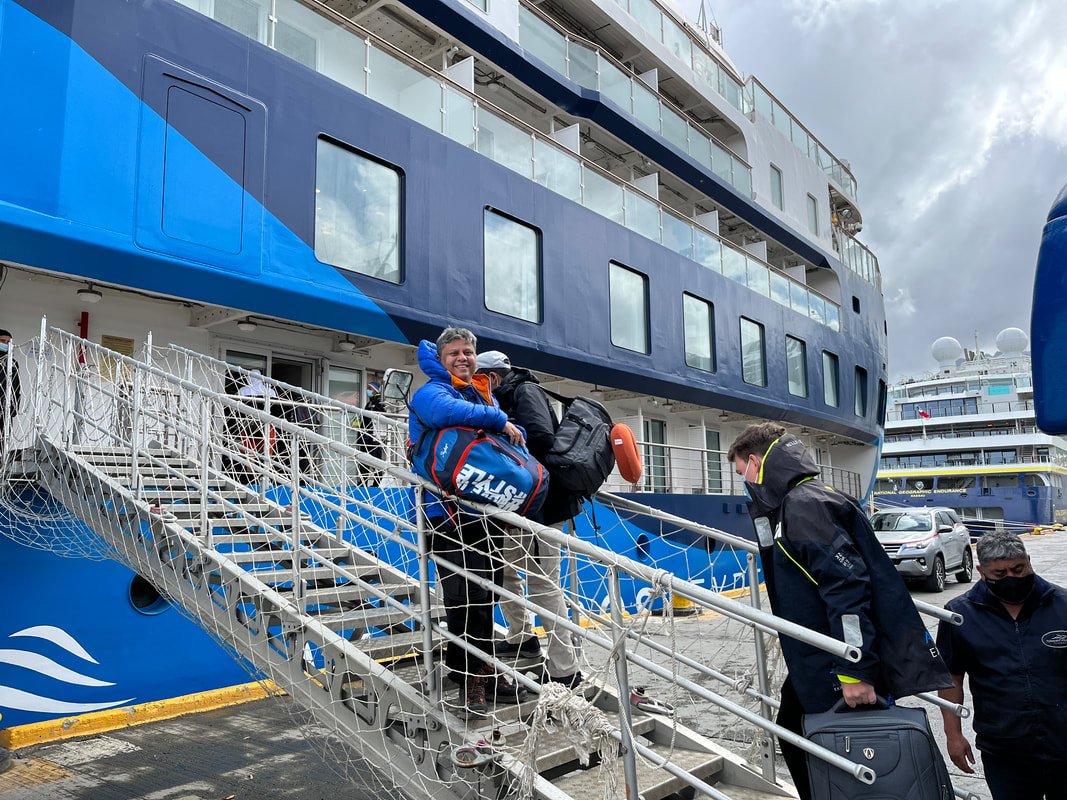 My room was ready - and my baggage…my fairly small backpack, rather…had already been deposited there. Everyone else had come with huge suitcases - two or three of them in some cases. I was the only one with a small backpack. The loading people must have laughed and sneered at my inadequate package. 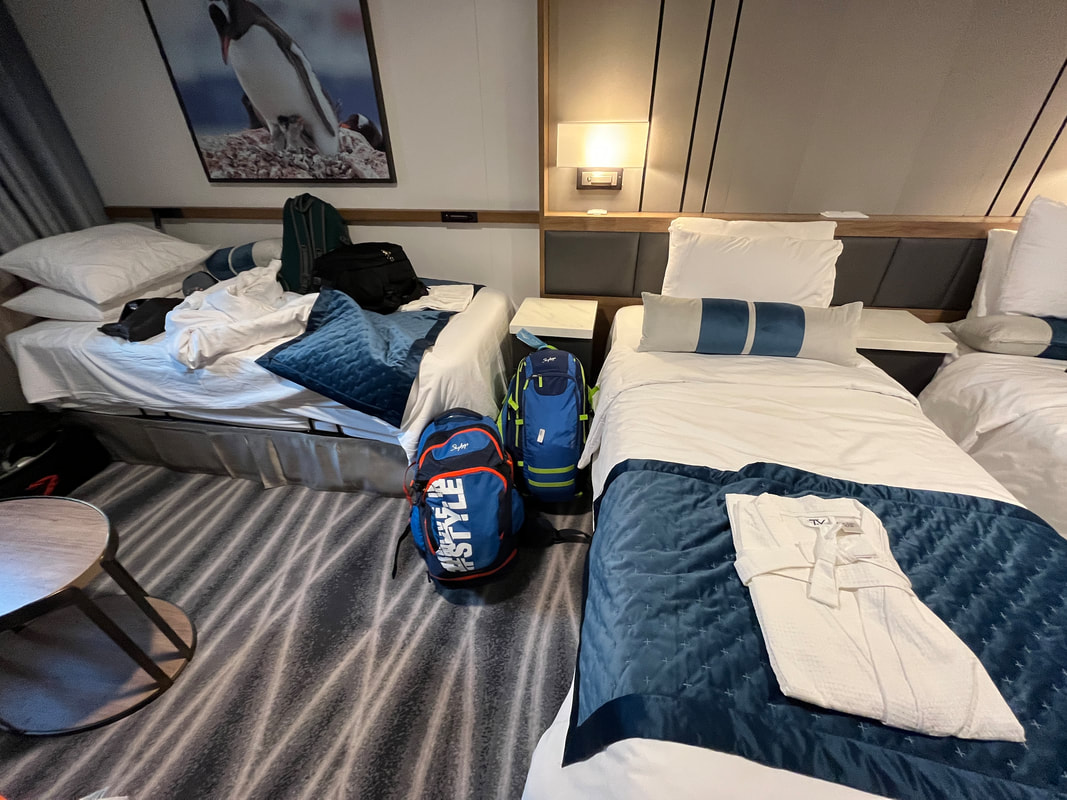 I went down to the room, and saw that it was a very nice room! Very snug and cosy! I loved it! It had three beds, lots of cupboards and storage cubby holes, a writing desk, a nice flat screen TV and an en-suite bathroom! It was roomy enough to give three people enough space to feel comfortable. We even had our own smiling and amiable room steward. Well, Carlos looked after a bunch of rooms  - but we thought of him as being our personal steward! 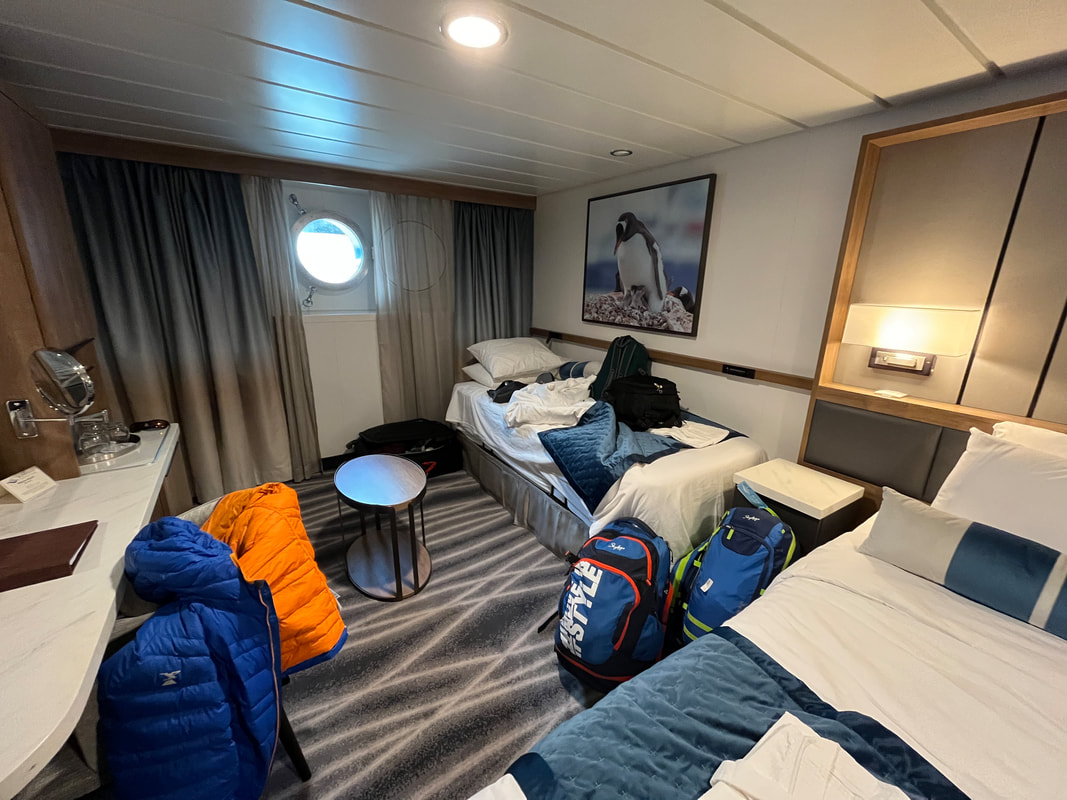 The cabin was down in the 3rd floor, and was a ‘porthole’ cabin. Which meant that it didn’t have an openable window - only a glass porthole. It wasn’t much of a view - but it was at sea level, which made it seem very dramatic, with the sea waves splashing violently on the glass and startling you! Even a normal sea gave the impression of a very rough sea, as even the small waves came and lashed these lower deck portholes. 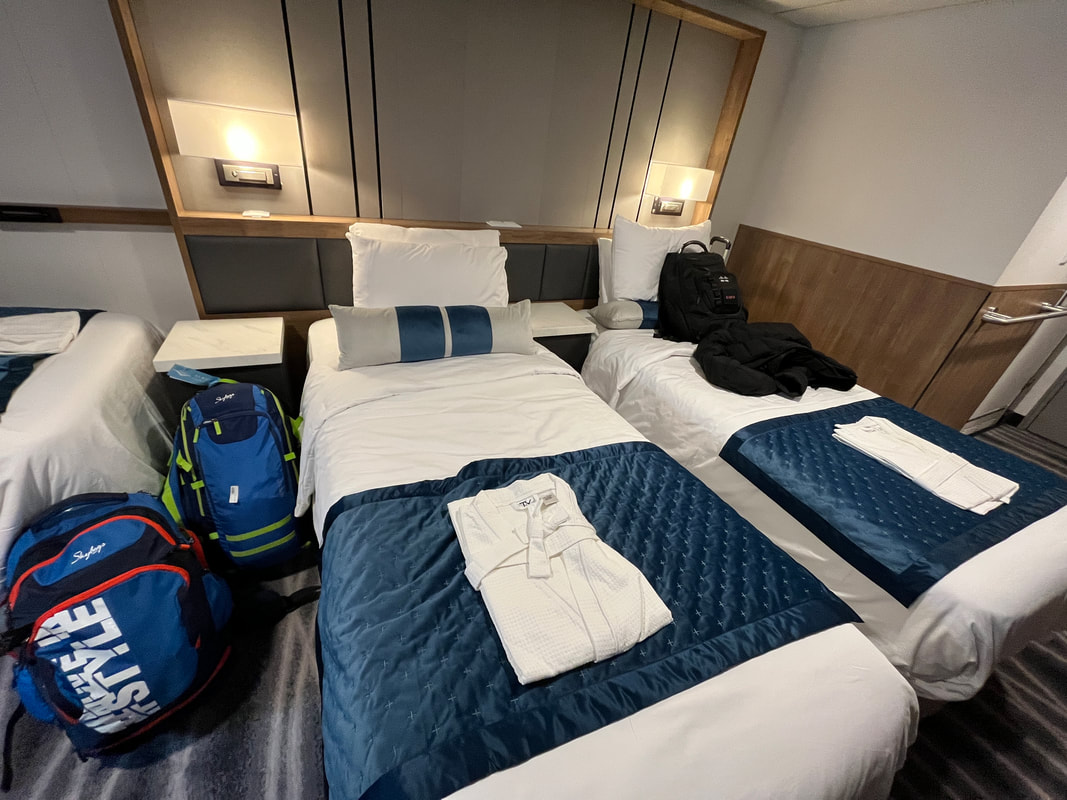 We chatted for a bit, and then an announcement came over the PA system, commanding us to assemble in the large conference room for the first of our mandatory briefings. All cruises have similar briefings - they introduce the staff of the ship, talk about safety rules, what to do if the ship sinks and the captain shouts ‘ABANDON SHIP!’, and so on and so forth. 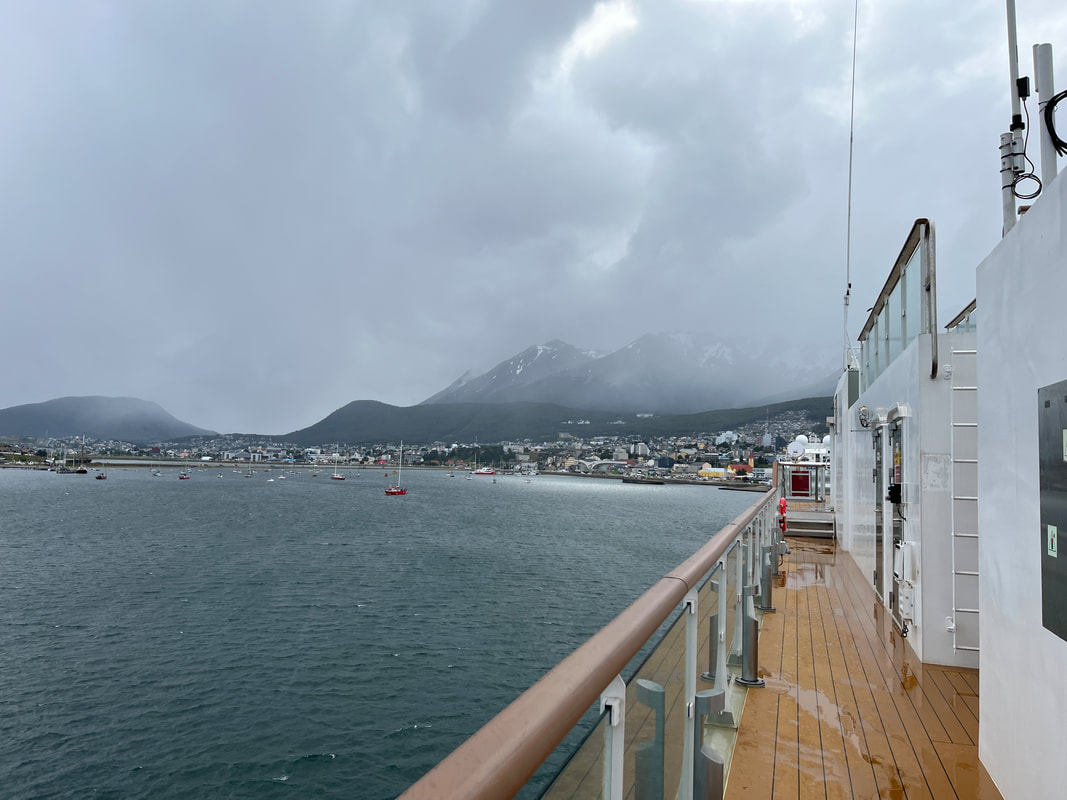 For the fire drill, they made us put on our life-jackets and go on the outside deck and hang about in the rain. 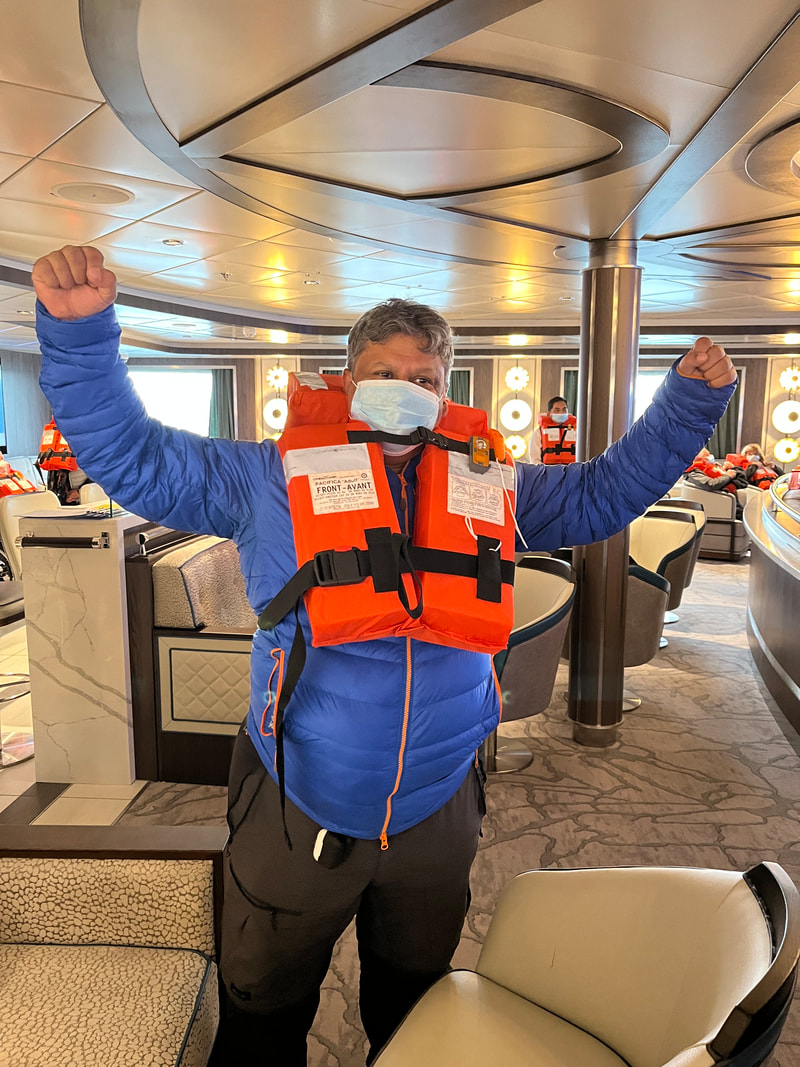 We weighed anchor and set sail  at 7.30, and lost last signals from the mobile towers from the land within half an hour of sailing much to the sorrow of people with cell phones. 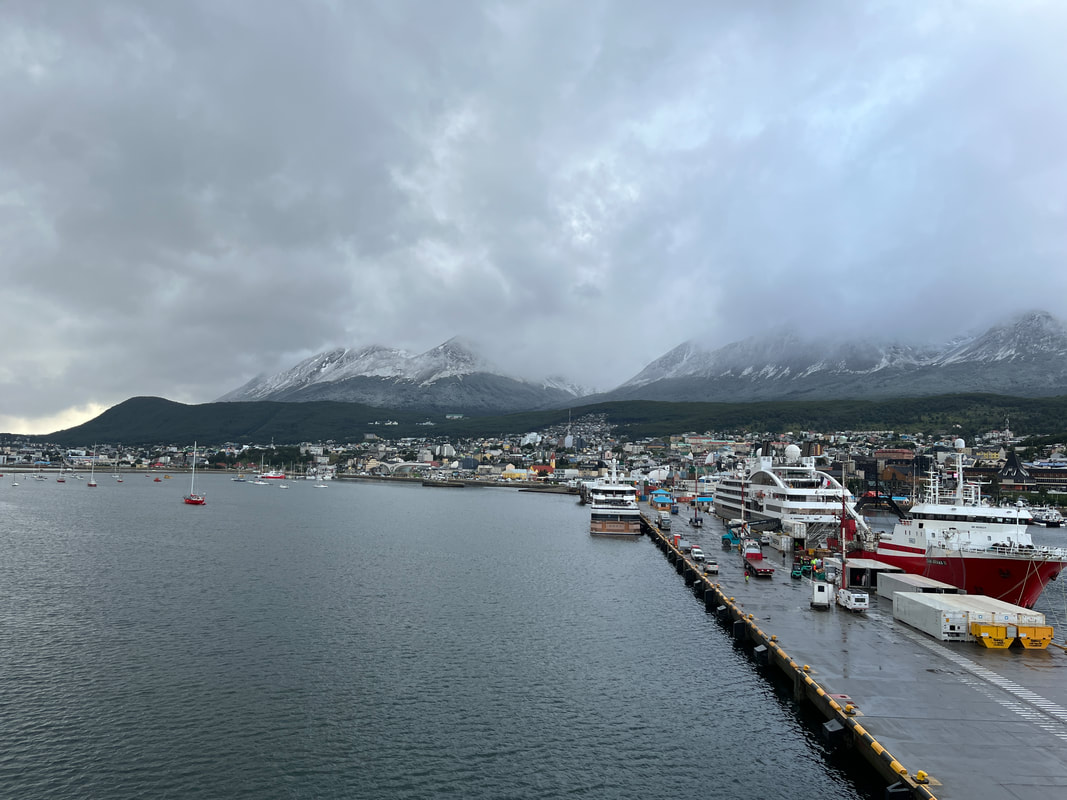 We would be sailing through the Beagle channel with Argentina on one side and Chile on the other. How exciting! We stood on the deck hoping to see some wildlife - penguins, seals or perhaps even whales! But alas, no luck. 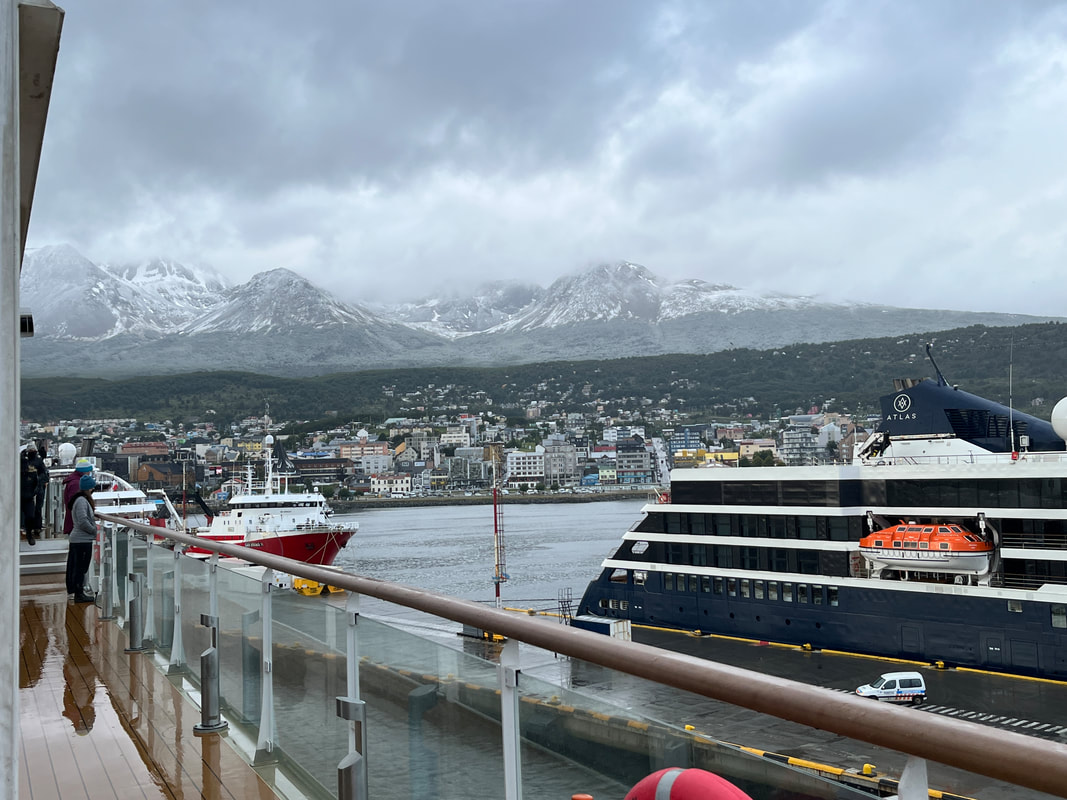 A plane taking off from Ushuaia airport 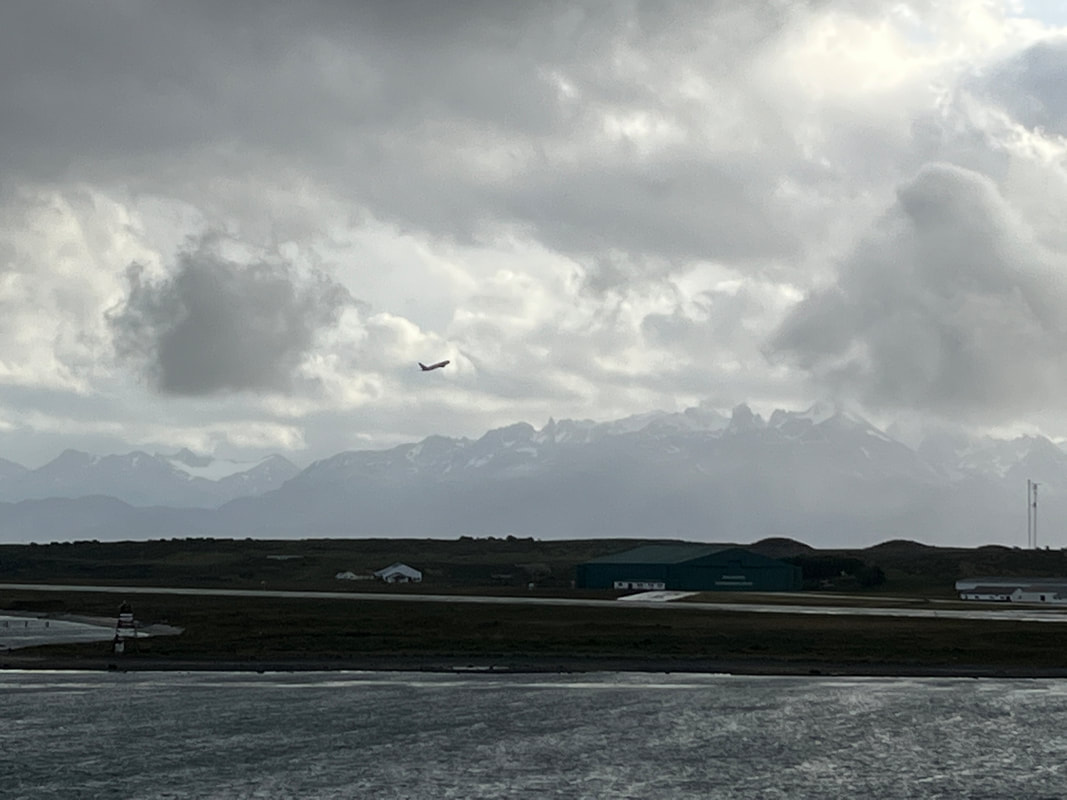 Me and my roommate Joby 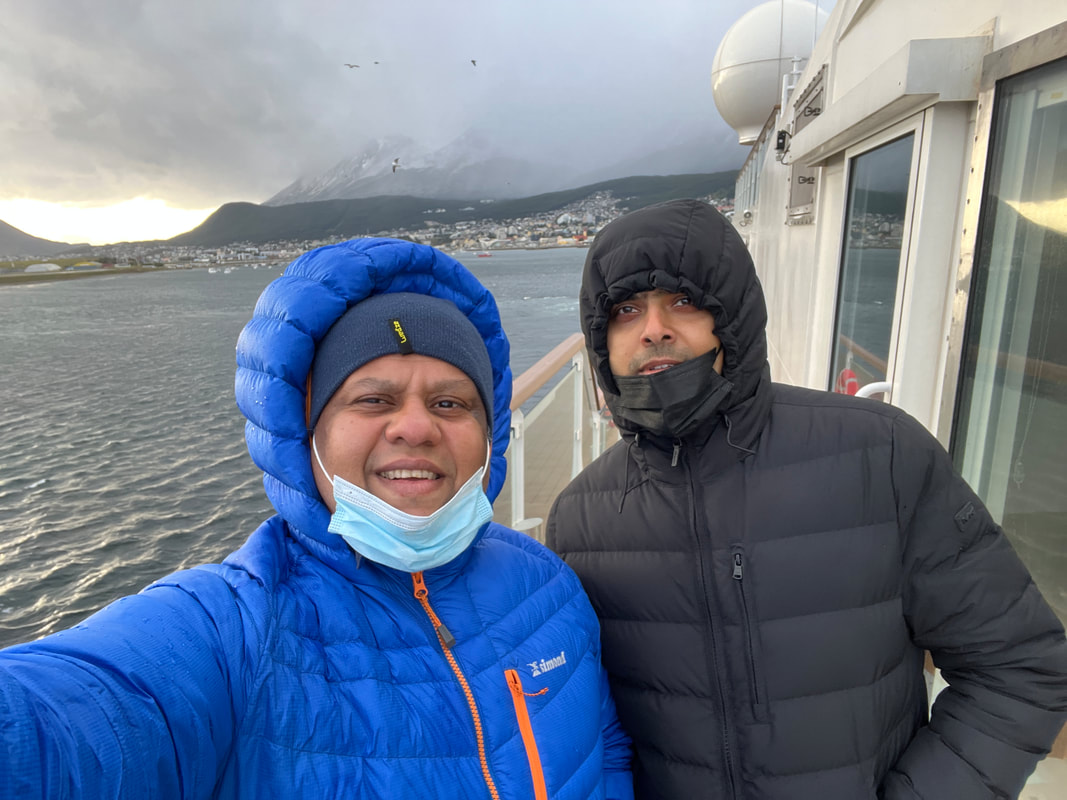 What a lovely day 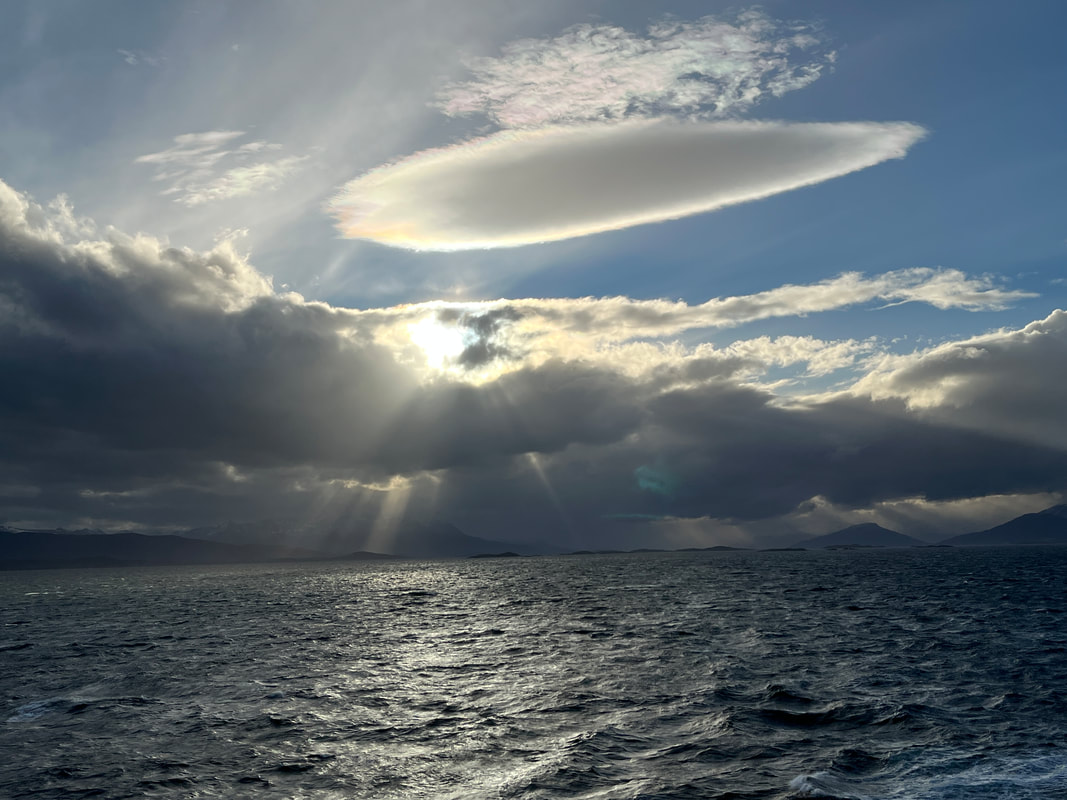 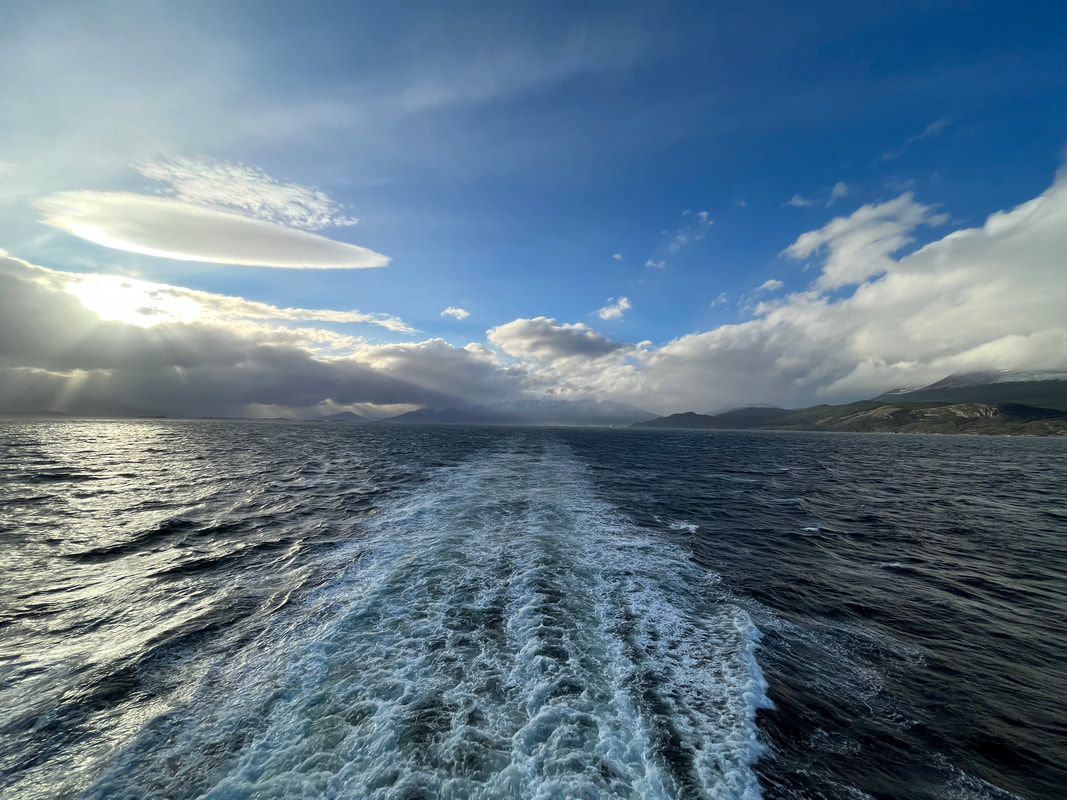